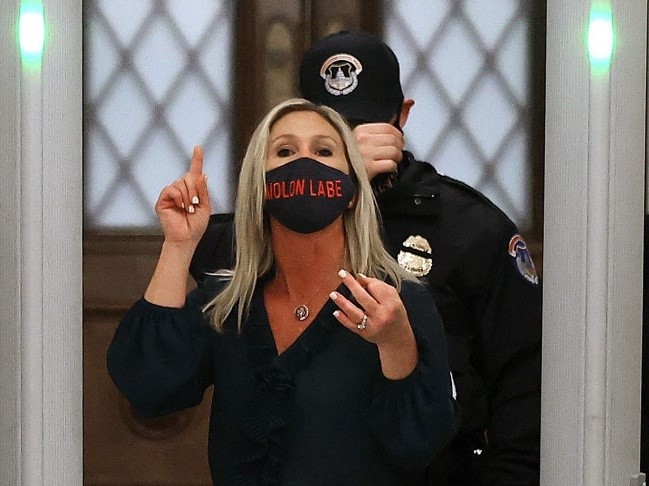 Armchair Classicism, the Politics of the Past, and You

Watching the House impeachment proceedings the week after the January 6th, 2021 insurrection at the US Capitol, I found myself baffled by the face mask worn by Rep. Marjorie Taylor Greene (GA-14). It read MOLON LABE in blood-red letters, a phrase adapted from the Ancient Greek μολών λαβέ, meaning essentially “come and take [them].” According to Plutarch, when King Xerxes of Persia told King Leonidas of Sparta at the Battle of Thermopylae (480 BCE) to hand over his arms and surrender, Leonidas responded with this defiant phrase. While the veracity of the quotation is questionable, it has nevertheless gone down in history (so to speak) in that way that pithy phrases often do. Inscribed on monuments to Leonidas at Thermopylae and Sparta, the phrase has been used as a military rallying cry by the Greeks during World War I, the Greco-Turkish War, and the Cyprus Emergency. I was shocked to discover, however, that μολών λαβέ has a long history of appropriation and use by Americans, beginning with its adoption as a motto of the Texas Revolution. Its newest iteration is as a slogan for gun rights activists and the far right.

This is a difficult pill to swallow for me. When studying the ancient Mediterranean world, it is easy to get lost in the foundations it represents and forget what has been built on top of it. Ancient Greece and Rome have long been cited as the origins of “western civilization”: the birthplaces of politics, philosophy, economics, civics, and ethics (all words with Greek roots). But, a new discourse in the world of Classics questions whether there is a “western civilization” at all, or whether the idea is a construction of later scholars attempting to pin their work on to a tradition of the ancients. As Kwame Anthony Appiah so eloquently puts it, the “western” values of liberty, tolerance, and rational inquiry do not belong to one culture and can be attributed to ancient civilizations from around the world. Yet the idea of the Classics as the epitome of western culture has become a pervasive rhetorical tool perverted by “armchair classicists” – modern politicians and theorists who manipulate perceptions of the classical world to their own ends.

The ancient Greeks and Romans did not think of themselves as western, or even European for that matter. They certainly had notions of patriotism but did not conceive of themselves as separate peoples from those of the Levant, Anatolia, and North Africa. The idea that classical civilizations were more “civilized” is as contrived as the idea of a “western” world, a term we continue to use in willful ignorance of geographic realities (Greece is further east than much of “eastern” Europe, and the west coast of Morocco is even further west than Ireland and Portugal). The concepts of both classicism and the “west” emerged in the Middle Ages when Christian scholars rediscovered the ancient texts, after a period of rejecting them as the drabbles of pagans, and found traction in the Renaissance as the newly conceived “western” world looked for a tradition on which to build its social identity.

Ever since, the classical world has been misrepresented and manipulated in service of the construction of narratives of white supremacy, cultural dominance, and identity politics. In my experience, ironically, most classical scholars identify as very socially liberal. When reading and discussing classical texts, they emphasize diverse interpretations and perspectives. And the classical world was diverse, with people of all races bordering the Mediterranean constantly meeting, exchanging material goods as well as ideas, and immigrating. In a tradition believed to date back to the Bronze Age called xenia (ξενία), the Ancient Greeks were obligated, for fear of retribution by the gods, to host foreign visitors and treat them with the utmost respect and kindness, especially if they were very far from home. But classicists often must watch with bewilderment as traditions such as xenia are overlooked in favor of emphasizing ancient militarism, such as that of the Spartans, championed by the alt-right as paragons of patriotism who fought for their homeland against invaders from the East.

Increasingly, classicists must face the fact that the field is irrevocably intertwined with problematic conceptions of domination and culture. The name “Classics” contains an inherent and undeniably subjective judgement – that the ancient Greeks and Romans were “classic” and everyone else is somehow worse or lesser than. The term actually comes from a comparison between the “peak” of ancient Greek and Roman civilizations (8th century BCE – 6th century CE), with their monumental architecture and robust documentation, and the preceding Greek “Dark Ages” (12th century BCE – 8th century BCE). The “Dark Ages” are not so named because we believe that they were less civilized or worse, per se, but because we have comparatively very little documented history from the period. Without this context, however, many take “classical” to be a sweeping judgement about quality and power and progress, and thus an academic field is turned into a political pawn.

In 2015, Harvard political science professor Graham Allison published his now notorious article, “The Thucydides Trap: Are the U.S. and China Headed for War?”, which he later expanded into a book drawing from the historian Thucydides’ writings on the Peloponnesian War (431-404 BCE). Thucydides argued, Graham claims, that the War was a result of a dominant and stable power (Sparta) being challenged and intimidated by a rising erratic power (Athens). The Thucydides Trap is an extension of this dynamic into a theory of international relations – that when the world order is challenged by the emergence of a new powerhouse, the result is almost always war. Allison applies this to the current evolution of US-China relations with the United States as Sparta and China as Athens, theorizing that without an imminent pivot in foreign policy, the two are doomed for military conflict.

The idea of the Thucydides Trap has become pervasive, especially among conservatives, as a way to describe Sino-American relations, with perhaps its most high-profile advocates being Steve Bannon, H.R. McMaster, and James Mattis. Known ancient Greece enthusiasts, they invited Allison to Washington in 2017 to sell Trump and his advisors on the Thucydides Trap as an international relations framework.

But classicists have been very critical of the ancient foundations of the Thucydides Trap. To be clear, Allison’s theories about modern military conflict stand on their own, but the Thucydides Trap’s posed classical basis is deeply flawed and seems to be an attempt to build legitimacy for the argument by using Thucydides’ name. Graham has been accused of mischaracterizing Sino-American relations as well as many of the conflicts he uses as examples (especially the Peloponnesian War) and gravely misreading and oversimplifying Thucydides’ arguments. Thucydides does assert that Athens’ antagonism of Sparta contributed to the conflict, but he also cites Athens’ unstable domestic politics, the dangers of populism, the hubris of imperialism, and an existential plague as causes for the war. Furthermore, the robustness of Allison’s classical research has been called into question, and he fails to recognize Thucydides’ elitist and anti-Athenian bias – the former general was exiled from the city for a military failure in Amphipolis and clearly favored Sparta’s moderate leaders over Athens’ prominent demagogues, whom he blamed for virtually every misfortune that befell Athens. The analogy of the U.S. as Sparta and China as Athens is also extremely fraught in this sense; the modern American political landscape is defined by populists, while that of China could be much more believably compared to the stable oligarchy of Sparta. But nuances such as this are not so fun or easy to incorporate into a worldview, and so fraught analogies are taken as fact by those unwilling to accept complication.

Boris Johnson is a prominent culprit of this type of misrepresentation. Having studied the Classics at Eton, Johnson often publicly touts his knowledge of Ancient Greek (he enjoys quoting long passages of Homer from memory), Latin, and the ancient Mediterranean in ways that grate on classicists’ nerves. In 2016, Johnson and Mary Beard (perhaps the most prominent classicist in the world) engaged in a televised debate, “Greece vs Rome,” positing the two civilizations against each other. Following their arguments (Johnson for Greece, Beard for Rome), the audience voted on who had “won” – the judgement here was quite arbitrary, but the debate was just for fun. Johnson, many noted, fudged quite a bit of evidence in his presentation (his use of 5th century Athens to mean all of ancient Greece, his distortion of Greek conceptions of gods and humanity, and his incorrect description of the Parthenon friezes, to name a few things). But in the end, this was no handicap for him – his dynamic speech easily won him the first phase of the competition. (He lost the second phase, in which Beard could refute his errors in real time.) He is a classic – forgive my phrasing – offender, regularly cherry-picking aspects of the ancient world for his own purposes, especially in casting himself and his fellow educated Brits as the inheritors of classical values and traditions.

It is incredibly seductive to project the ancient world onto the modern, to try to draw parallels between them and present modern narratives as continuations and reiterations of those that have come before. And I certainly believe that we should learn from the past and identify with its figures; I feel a profound solidarity with the human race when studying the ancients, trying to understand how they lived and felt. But what Allison, Bannon, Greene, and all of the other armchair classicists out there should remember, is that the classical world is not ours. Any attempt to argue so inherently relies on subjective, unhistorical ideological constructions of social identity and progress. We are inevitably and undeniably influenced by the ancients, but their cultures are not a tool with which to mold the present. While I do believe that human nature has remained largely the same across history and geography, classical languages, values, and politics are things of the past.

The tradition of drawing on anachronisms to build ethos is not unique to modern public figures in any way (take the Holy Roman Emperors, who referred to themselves as such for centuries despite not being holy, Roman, or emperors, as Voltaire notes), but it has never been a valid way to build an argument has become exponentially more insidious in the post-Trump world of alternative facts. When faced with rhetoric appropriating the ancient world such as the Thucydides Trap or the slogan “molon labe,” very few modern voters will bother to even Google the source material, let alone consider whether or not the concepts have been used in a way that reflects their original contexts and truly applies today. And the armchair classicists know this, are even counting on us being so intimidated by their command of history that we take their often baseless posturing as truths beyond our comprehension.

So the next time you hear someone try to use the classical world as a rhetorical tool, please remember: Thucydides was just as biased and flawed as anyone else, Boris Johnson and Marjorie Taylor Greene rarely check their facts, and we are not the inheritors of classical culture. We can only try, with all possible objectivity and careful research, to pick up the pieces they left behind.

Jordan Murphy
More from The ReviewMore posts in The Review »