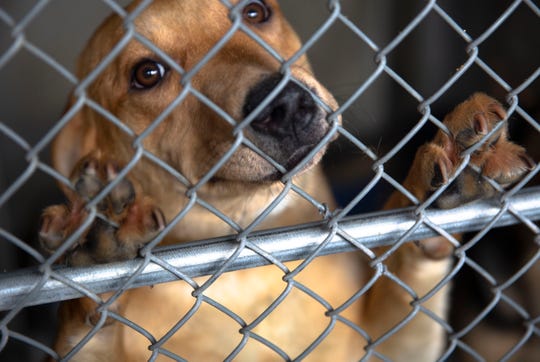 Dog Overpopulation in New Mexico: A Symptom of Chronic Poverty

Notoriously overcrowded and underfunded, New Mexican animal shelters struggle every day to keep up with the number of strays and surrendered pets that come through their doors. Every year, these shelters act as the final destination for thousands of dogs. The pandemic has only worsened conditions inside the shelters –– in the past year, the decrease in volunteers and employees due to lockdown restrictions and safety concerns has strained animals and people alike.

“I would say there’s only about six of us [volunteers] right now for 280 dogs. For staff, they primarily focus on cleaning and feeding, so they don’t spend a lot of time interacting with the dogs,” says Monica Arvin, a volunteer with the Animal Services Center of Mesilla Valley in New Mexico (ASCMV). The ASCMV has one of the highest intakes per capita of municipal kill shelters, topping 10,000 dogs a year. In total, the “number of dogs, cats, kittens, and puppies received annually by New Mexico’s public and private shelters [are] estimated at more than 135,000.” While most dogs are funneled through the system into homes or long-term rescue centers, thousands of dogs that don’t meet specific criteria are euthanized to make space for continued intake. Outside of Mesilla Valley, Arvin says there are non-profit shelters ranging from “small mom-and-pop places that take like six dogs at a time… to large non-profits like Animal Humane NM––they take like 20 to 30 at a time.”

In lieu of effective spay and neuter laws, volunteers are tasked with funneling thousands of dogs out of shelters and into homes. New Mexico’s adoption rates are significantly lower than the rates at which dogs are abandoned, surrendered or born on the streets. Almost all of the shelters in New Mexico––municipal and non-profit––participate in volunteer-based transportation programs across state lines. Other states, with firmly established spay and neuter laws and higher average incomes per household, often find themselves with empty shelters. In these states, puppies get adopted fast, and older dogs are surrendered at much lower rates. So, places like New Mexico become their puppy pipeline, and families who want to adopt can do so while dogs at risk of being euthanized or permanently kenneled can find homes.

One volunteer from Wyoming has dedicated his life to animal transport across the country. As a licensed cargo plane pilot, he constantly flies his plane back and forth from New Mexico to destination states, transporting fifty to sixty dogs (and cats) at a time. It is up to pilots like him and teams of ground volunteers in their personal vehicles to move individual animals across state lines and into no-kill shelters where they have significantly improved odds of being adopted. Or, they are brought directly to new owners who are expecting them. In another case of “high-volume transports,” the Animal Services Center employs a large truck where they can fit about thirty animals at a time. Arvin says their most frequent destination is Phoenix, Arizona.

No Dogs Left Behind

The ASCMV has a transportation and rescue partnership with Best Friends Animal Society in Utah, and this is especially valuable because they willingly accept pit bulls. Pitt bulls are an incredibly misunderstood family of dogs. They are often equated by word of mouth and in the media with violence and dog-fight horror stories. According to Best Friends, “the dogs fell prey to sensationalized stories in the media, which led to panic policymaking” and a cycle of abuse that has kept them on the streets, reproducing quickly with nowhere to go. Arvin asserts that New Mexico is home to a disproportionate number of stray pit bulls. She says, “many people in rural areas let their pit bulls roam around, so most dogs in the shelter are mixed with [pit], and that always makes them harder to adopt.” So, it is often pit bulls on the long drives or crowded plane rides from New Mexico to states like Utah, Colorado, California, Oregon and Washington. The transport volunteers are extremely dedicated to the animals, and they self-impose plentiful safety regulations for the duration of their time with the dogs.

Despite best efforts to take dogs off the street via trans-state drives and plane rides, it is still a gamble whether or not they will find a permanent home at their new destination. Purebred dogs and puppies are highly desirable, and in states with efficient spay and neuter programs, affordable purebreds and puppies in general are difficult to come by. Arvin says that “They don’t have many puppies and their shelters are empty. So, they welcome the dogs we send because we are so desperate to get them out.” Yet, older dogs, mixed breeds (distastefully called “mutts”), and the overly abundant Pit Bull mixes are still left behind in adoption rates.

While the pandemic worsened conditions overall for the shelter workers, volunteers and animals, there was a silver lining. Fostering has increased dramatically during quarantine; people who found themselves working from home, isolated from family and friends, and who were not satisfied by plant parenthood opened their homes to shelter animals. In doing so, Arvin says they “become the ones who try to get [the animals] into a home. In addition to homing, feeding, advertising, a lot are also doing private veterinary care.” Arvin also says that “overall, there were fewer adoptions locally, but an increase in rescue transfer because people came out of the woodwork in other states.” While so many community members were forced to give up their pets during quarantine due to limited resources and widespread unemployment, their neighbors stepped in to care for the innocents.

The Cycle of Overpopulation Due to Poverty

Areas in New Mexico hit hardest by COVID-19 shutdowns and cases were already underprivileged, and the number of animals coming to shelters from those areas shows that animal overpopulation is truly a symptom of human poverty. Deregulated spay and neuter laws mean that pet owners pay out of pocket if they want the procedure done. Arvin says that “with a private vet being 200-300 dollars and shelters stopping low-cost spay and neuter,” it has become increasingly difficult to afford proper pet care. In addition to the ASCMV, Arvin is a volunteer with the Spay and Neuter Action Program (SNAP). They were able to lower the cost of a co-pay to $60, covering both the surgery and the anesthesia. Yet “they have a very low rate of people returning the application because they don’t have the 60 dollars.” So these communities are overrun with strays, with new litters born practically every day. In a staggering study, Arvin shares that “Of the strays [in a year], 88% were unsterilized, and if the owner surrenders, 82% were unsterilized. That is a significant amount of animals coming into the shelter who have most likely had litters.”

What New Mexico needs is government-funded spay and neuter programs, lessening the number of unwanted animals in need of rescue later in life. They are the collateral damage of unchecked poverty, being forced to live on human terms to survive or risk being euthanized. According to New Mexico’s welfare statistics, about one out of every five people survive below the poverty line –– that is 420,293 of 2,043,896 residents. In fact, New Mexico is the second most impoverished state behind Mississippi, not counting Puerto Rico and American Samoa. They truly lack the resources to survive, and it is turning the company of a beloved pet into a luxury. The pain of losing a dog to preventable disease; or them dying in labor due to mingling with stray dogs; or having to give them up to a shelter that may or may not euthanize them is not a burden that impoverished people should have to bear. Dogs deserve proper care when they are forced to live in a domesticated society, and they absolutely should not be discarded for being a product of a corrupt system that leaves so many struggling on a daily basis.

Despite this dire reality, only a small percentage of citizens need to care for real change to come. It could be as simple as picking up an extra bag of dog food at the store and dropping it off at a homeless shelter or food bank for houseless owners to provide for their companions. It could mean signing up to drive a few hours one weekend to get a mother and her litter a little closer to a no-kill shelter. Most importantly, it can look like casting a ballot for local representatives who want to prioritize animal welfare in recognition that proper animal care can mean overall and overdue improvement of low-income communities.

Dog overpopulation is certainly a problem on the surface, and it only exposes greater suffering when examined more critically. The way a state, country, or society treats the “lowest” of itself is the primary indicator of its health. Even while the “highest” are doing well, if that prosperity is only serving as a welcome mat in front of a closed door and doesn’t reflect what is behind it, it is failing. On this scale, our ownerless animals are nonexistent. They are treated as inconvenient, expendable bodies for the impoverished to deal with. All the while, too many lawmakers refuse to create sustainable systems for poor people to have pets without contributing to the overpopulation crisis. But, this is not a reason to give up. The success of the volunteer transportation system in reversing the course of so many animal lives is evidence that individual actions matter, and they create communities that have all the necessary power to alleviate this symptom.