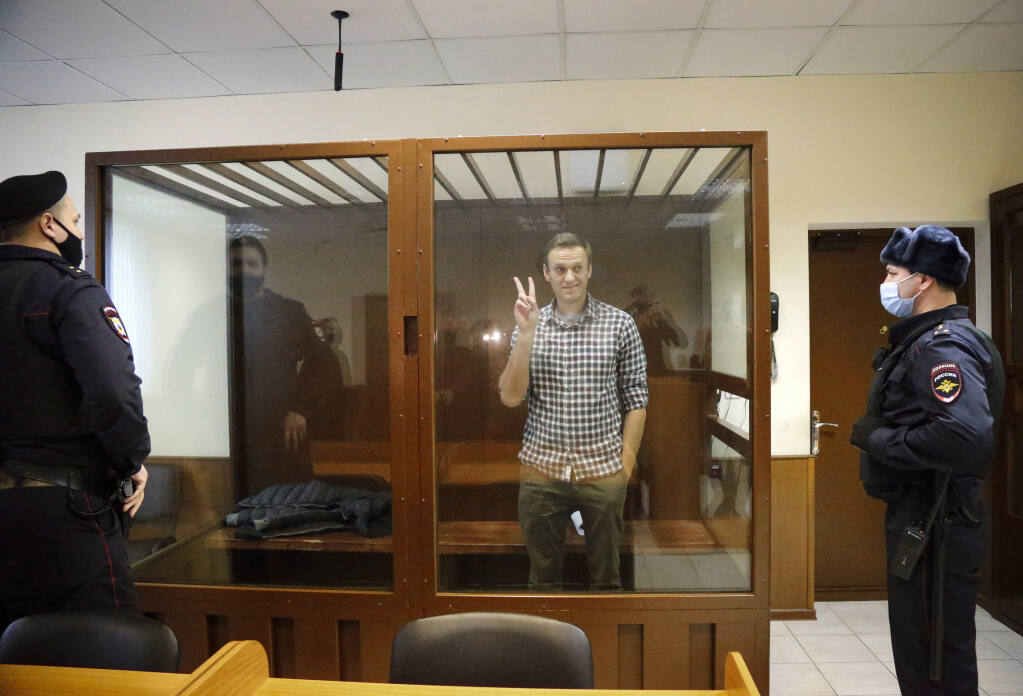 Russian politician and activist Alexei Navalny returned to Moscow on January 17, after five months spent recovering in a German hospital from a near fatal poisoning, which he blames on Vladimir Putin. Navalny was immediately arrested upon his return, as the government threatened would happen, and has since been sentenced to a penal colony for two years and eight months. His ostensible crime was violating the terms of his parole from an earlier charge after he failed to report to Moscow authorities in-person during his time in Germany. But Navalny has declared this is simply a pretense to lock up Putin’s most vocal and promising competitor, and his sentence has inspired the largest nationwide protest in recent history.

Born in 1976 in a rural town outside of Moscow, Alexei Navalny became involved in politics in 2000, two years after graduating with a law degree from Peoples’ Friendship University of Russia. Aligning himself with the Russian United Democratic Party (Yabloko), he held numerous positions within Yabloko, including regional councilmember and Chief of Staff of the Moscow branch of Yabloko. In 2007 Navalny was expelled from the party for supporting nationalist ideologies that did not align with Yabloko, a social-liberal party. He then branched out on his own and dedicated himself to exposing corruption, advocating open elections, and campaigning against Vladimir Putin.

In 2011, Navalny founded the Anti-Corruption Federation and launched a blog that published investigative journalism on high-profile misconduct. He later expanded his efforts to a YouTube channel, where he has had over four million subscribers. It was through his work as a prominent blogger that Navalny first gained the attention, and ire, of Putin and his United Russia Party as Navalny’s criticism turned towards the then-Prime Minister. Image Credit: CNN  Navalny is arrested at anti-Putin rally in 2018

Navalny also organized protests. In 2011 he was arrested for protesting election fraud in the parliamentary elections. After his release from jail, he urged Russians to protest against Putin, who was running for president at the time, and later organized a 50,000-strong demonstration in Moscow following Putin’s victory in 2012.

The origins of Navalny’s most recent imprisonment date back to 2014 when he and his brother, Oleg, were arrested for fraud and money laundering. Navalny claimed at the time that the charges were fabricated and a European Human Rights Court sided with Navalny in 2017, but Oleg still served three and a half years in prison, while Navalny was under house arrest for a year. As part of the suspension of jail time for Navalny, he was put on parole and ordered to check in regularly with authorities in Moscow. The violation of this parole during the summer and fall of 2020 is the basis of Navalny’s 2021 conviction.

Navalny has never actually held public office, but has run against Putin-supporters for several positions, including for the mayor of Moscow and for parliament. In 2018 he became the leader of the political party Russia of the Future and attempted to run against Putin in the presidential race that same year, but his 2014 criminal record barred him from officially entering the race. Navalny has been clear that his ultimate goal is the presidency and many see him as Russia’s best chance to defeat Putin.

While Navalny has gained international fame and praise as one of the most prominent and bold critics of Vladimir Putin, his politics are not without controversy. Mingled with his desire for democracy, freedom of expression, open elections, and accountability for corruption are nationalist and anti-immigration stances.

In the mid-2000s Navalny participated multiple times in the annual Russian March, a demonstration by various Russian nationalist organizations, many of them neo-nazis, under the slogan “It’s Our Country.” This led to his expulsion from Yabloko. He has also voiced support for stronger legislation against illegal immigration and stricter immigration control. Even Navalny’s insistence on remaining in Russia, despite several assassination attempts, may be part of his nationalist sympathies.

Navalny has made other controversial comments that have concerned liberals both inside Russia and globally. He led a nationalist campaign called “Stop Feeding the Caucus”, which advocated suspending federal aid to Chechnya and the Caucasus regions. He supported Russia’s war against Georgia in 2008 and called for expelling Georgians out of Russia (he has since apologized for offensive comments made about Georgia). People who worked with him in the Yabloko Party have also accused him of making racist comments.

However, Navalny’s nationalist comments and actions have a pragmatic dimension. During his political career, Navalny has come to realize that the only way to create a majority powerful enough to push Putin and the United Russia party out is to unite nationalists and liberals. While most liberals in Russia already vehemently oppose Putin, Navalny believes there is still work to be done in showing nationalists that Putin is their enemy. By engaging with nationalists Navalny hopes to demonstrate his concern about issues important to Russian nationalists and unite them with pro-democracy movements. Furthermore, Navalny’s controversial remarks were made over a decade ago and in the past few years he has rephrased his stance on immigration and refrained from voicing more polarizing political beliefs.

Those familiar with Navalny’s political career have wide-ranging perspectives on this activist. NYU Professor and Russia expert Eliot Borenstein states in a  Facebook post: “He’s not Nelson Mandela. He’s Aung San Suu Kyi [state counsellor of Myanmar who denied the Rohingya massacre]”. At the same time, former Polish president and Nobel Peace Prize recipient Lech Walsea and Russian exile and professor Alexander Etkind have nominated Navalny for a Nobel Peace Prize based on his work fighting corruption and advocating for democratic ideals.

His various political beliefs and past statements make Navalny a complex figure, yet his work is still vital for the progress of Russia. A recent Foreign Policy article used the headline “Navalny isn’t a saint, but dissenters don’t have to be.” This sentiment captures the idea that imperfect people can still enact positive change.

Two weeks after his arrest on January 17, Navalny was sentenced to two years and eight months in a penal colony. Navalny appealed the sentence but was denied and on February 26 was transported from a Moscow detention center to a penal colony east of the capital, IK-2. Past inmates have stepped forward to express the horrible treatment they experienced at this notorious prison. Konstantin Kotov, who was arrested for protesting elections in the summer of 2019, told Pjotr Sauer at the Moscow Times, “This is, by any measure, an extremely strict prison. They try to control your every step, your every thought”. In the same article, Pytor Kuryanov, a lawyer at the Defence of Prisoners’ Rights Foundation, described, “It’s completely lawless there. They will break you.”

Throughout the trial and conviction, Navalny has continued his activism through social media, court hearings, and notes sent to his supporters. As Vladimir Isachenkov reported, he has called his arrest “Putin’s personal revenge” after Navalny survived an assassination attempt last year. He also said “It’s a message from Putin and his friends to the entire country: ‘Did you see what we can do? We can spit on laws and steamroll anyone who dares to challenge us. We are the law.’” In early February, Navalny’s arrest sparked massive demonstrations across Russia. The government responded with a fierce display of riot police officers. Over 5,000 protesters in 85 cities were detained by the second weekend of protests. Despite the peaceful nature of the demonstrations, participants reported the use of tear gas, tasers, and other forms of brutality from police officers, leading some to compare the present situation to the USSR. Not all the protesters support Navalny politically, but they resent the corruption of the current government and condemn the silencing of opposition.

The protests are unique in the scope of participation. Normally protests are confined to larger metropolitan areas such as Moscow and St. Petersburg, yet this time people in over 100 cities and towns took to the streets to fight for their freedom of expression and demand the release of Navalny. Many of the participants reported that they had never participated in demonstrations before. Navalny’s arrest and prison sentence has awoken many to the autocratic nature of the current Russian government and the threat the government poses to liberty and freedom. Other developments in Russia, such as an economic downturn that many blame on Putin, have also created a general sense of dissatisfaction in Russia, which motivated some to protest.

The government’s response only strengthened demonstrators’ conviction that Russia is no longer a free country. It also reveals the government’s fear of losing control of its population.

Foreign governments have likewise condemned Navalny’s arrest. The United States and the European Union have imposed joint-sanctions on seven government officials. In protest of Navalny’s poisoning, they have also imposed sanctions on 14 businesses involved in chemical manufacturing. They have also adopted export and visa restrictions.

Though these recent sanctions are important, they fail to target the individuals Navalny has singled out in the past as the most powerful leaders in Russia. A London-based investor and Russian critic Bill Browder tweeted after the announcement of the US sanctions that these would be “way too little and not touch Putin’s billionaire cronies”. It seems that the international community will need to take a bolder stance against Russia, particularly against its oligarchs, if they wish to truly pressure the nation into reform.

Alexei Navalny is regarded by many as Putin’s main opposition and the best hope to restore democracy to Russia after years of autocratic and oligarchic rule. His arrest and prison sentence on an arbitrary charge is a tactic of the Russian government to silence this powerful dissenter, yet this action has only awakened more people to the corruption and autocratic tactics of Vladimir Putin and his supporters. It remains to be seen if and how Navalny will be able to continue his political opposition from prison and what will happen when his sentence comes to an end in two years.

Published in Uncategorized and World