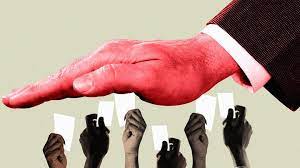 The Olden Tactics: A Return of Voter Suppression

The 2020 election marked a new beginning for the unraveling of American democracy. Influenced not only by the magnitude of polarization, but also the faith American’s place in voting systems, Trump’s attacks on the validity of the election challenged the ever-popular precedent of respecting election outcomes. A recent Reuters poll found that 52 percent of Republicans believed that Donald Trump won the election outright, while 68 percent of Republicans believed that aspects of the election were rigged. Fueled by a multimillion dollar legal campaign and a social media strategy of deception, it is clear that Trump’s claims on the illegitimacy of the 2020 election results made a tangible impact on voters’ perception of election security.

President Trump often retorted that fraudulently printed ballots appeared in mass — that individuals frequently submitted their mail-in ballots past the legal voting date, or that some even “stuffed the ballot boxes” with ballots that were not their own. Eric Trump, Donald Trump’s son, echoed his father’s claim of voter fraud on his Twitter, retweeting videos claiming to show a Virginia individual burning ballots all marked for Donald Trump. Virginia Beach City officials promptly debunked Eric Trump’s tweet, explaining that the ballots burned in the video were sample ballots.

It must be made clear that all these claims of widespread fraud and ballot manipulation in the previous election — claims like Eric Trump’s — are either an overwhelming exaggeration of risk or simply baseless. Not only is voter fraud empirically uncommon, but it is nearly impossible to commit: in order to receive a mail-in ballot, a majority of states require a social security and address match, and in order for a ballot to be counted as valid, it requires a signature that must be cross checked with existing data. Aside from the dozens of safeguards that both ensure the identity of the individual casting the mail-in ballot as well as the legitimacy of the ballot itself, reviewed investigations by the FBI found fewer than 1000 total cases of voter fraud nationwide in the entire 2020 election in which more than 150 million votes were cast. Most notably, Trump’s hand picked Secretary of the Department of Homeland Security reported the 2020 election to be “the most secure in American history”, only furthering the evidence that after recounts in multiple swing states like Georgia, Michigan and Pennsylvania, Biden fairly secured a margin of victory.

Despite the fact that Trump’s claims about election fraud have been widely debunked, it has not stopped Republican state legislatures across the country from exploiting the issue as a political excuse to create legislation that will suppress voters. The Brennan Center for Justice, a think-tank that tracks which states are currently issuing challenges to voting access, reported 28 states having introduced or carried out legislation to restrict voting access in over 106 pieces of legislation—more than three times the amount of legislation offered on the topic a year ago. Among these bills, one third are specifically designed to limit the process of mail-in voting in the coming 2022 and 2024 election cycles. In Georgia, legislators are attempting to mandate that access to mail-voting be only legal if an individual can identify a legitimate excuse for not being able to vote in person. And in Pennsylvania, the state house has issued legislation to permanently end early voter lists, a process which would make it harder to obtain a ballot and substantially increase the frequency of voter roll purges—a process that directly prevents individuals from voting by subjectively deleting them from registration lists.

It is also important to note that whilst restricting mail-in voting harms all voters, it has a disproportionately negative effect on Democrats specifically. Even before the pandemic, Democrats were more likely to use mail-in balloting, and post-pandemic, more than 65 percent of democrats intend to vote using the mail-in system whereas that statistic only sits at 40 percent for registered republicans and independents.

But the modern impetus for voter suppression was not born in the era of Trump. In a 2013 landmark 5-4 Supreme Court decision, Shelby County v. Holder, the chief justice offered the majority opinion claiming that Section 4(b) of 1965 Voting Rights Act was unconstitutional. The Voting Rights Act, in part, mandated that states with a strong history of voter suppression must get their statewide voting procedures approved by the Department of Justice before implementation. Ultimately, Chief Justice Roberts struck down this provision because Congress had failed to update the listings of states that must provide statewide voting procedure plans to the Department of Justice for approval before implementation. Asserting that minorities were no longer considered to be statistically disenfranchised, more than ten states with strong prior histories of voter disenfranchisement now have free range to organize their voting procedures without federal oversight. The Brennan Center for Justice “consistently found that states previously covered by the preclearance requirement have engaged in recent, significant efforts to disenfranchise voters”. The same states “purged voters off their roles at significantly higher rates” after the Supreme Court decision.

The Republican attempt to restrict voting does not stop at just mail-in voting and voter roll purges. Since 2010, more than 25 states have instituted stringent voter ID laws, in some cases even compelling their residents to provide multiple forms of government-issued identification renewed within the last four years. This is a blatant attempt at suppressing voters—after all, it does not take much to know that most people do not carry around more than one form of photo ID. Furthermore, more than 21,000 in-person polling locations were closed before the 2020 elections, making it increasingly difficult for those who vote in close proximity to their jobs as well as those who live in large geographical districts to efficiently vote.

Whilst it is true that 35 states over the past 3 months have responded with pieces of legislation to expand voting access, these attempts ultimately are not as likely to influence electoral outcomes as their Republican-sponsored counterparts. More than half of the legislation authored to expand voting access was issued in states that overwhelmingly swing democratic, whereas large majorities of the legislation to restrict voter access is being authored in states with much closer state-wide vote counts like Georgia and Pennsylvania. In other words, expanding access in states that already lean heavily towards one political party does not have much of an effect on the outcome of the electoral college vote, but restricting the vote in a state like Georgia where Joe Biden won a majority with a less than 1 percent margin has the potential to swing an entire presidential election.

All this said, the question arises: what is the government’s fundamental responsibility to the process of voting and which forces must it learn to balance? Proponents of restrictive voting laws would suggest the government has an obligation to ensure that elections are secure and efficient, while those who oppose these laws would insist the government must make voting accessible to all citizens. Safe and secure elections as well as enfranchisement are objectively legitimate interests that belong in the public dialogue, but in modern America, there is not a balance between these priorities. There is a scale that tips undeniably and unflinchingly in the direction of the proponents. In a country with less than 1000 annual cases of voter fraud annually, more than 5 million voters, who it should be noted are disproportionately black, are disenfranchised by non-felon voting laws already. Now with the institution of new voter ID laws, restrictive mail-in balloting, and the widespread closure of polling locations, millions more will lose the access they need to participate in the democratic process. In other words, the facts of this debate paint a grim picture: for every case of voter fraud independent federal agencies uncover, thousands of people are denied access in return.

In conjunction with Donald Trump’s offense against the faith Americans place in election security, the Shelby County v. Holder decision and its aftermath have made the reality of modern American democracy abundantly clear: the right to vote shall not equal the ability to vote. The power of grassroots movements to beat back restrictive voting legislation at the state level is laudable, but the preclearance requirement of the Voting Rights Act is commonly cited as one of the most effective tools against voter disenfranchisement ever implemented at the national level. In order to codify not just the right but the ability to vote, Congress must amend Section 4(b) of the Voting Rights Act so the Department of Justice can consistently review the ongoing attempts at voter disenfranchisement without the need for another iteration of a baseless debate.