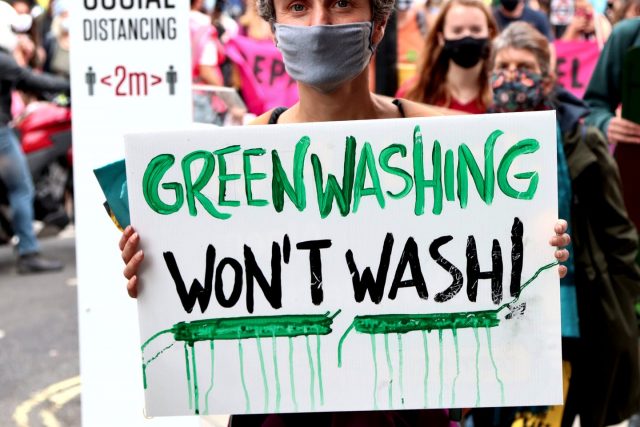 GreenWashing: On How Neo-Liberal Capitalism Persists Amid The Climate Crisis

Are we truly in an era of green marketing and greenwashing today as our climate crisis continues to deteriorate? Does Fiji water truly justify their claim that  ‘every drop is green’?

Coined in the 1980s and beginning with the anti-nuclear campaign, “greenwashing” describes a business strategy of making claims about the environment to promote companies’ customer loyalty and brand image. Individuals and organizations in positions of power use greenwashing to deceptively employ altruism as a tactic to enhance their own public perception. Greenwashing has become yet another form of thinly-disguised consumerist brainwashing that fails to address environmental issues.

Jerry Mander paved the way for the usage of the term ‘’ecopornography’’ in 1972 as a warning against some of the outlandish, often false, environmental claims oil companies made. Not surprisingly, “greenwashing” also has its foundation and roots in the growth of behemoth oil and gas companies. This trend dates back to the #ExxonKnew scandal of the 1970s when the public learned that oil companies such as Exxon Mobile had channeled resources and research toward disputing climate change-related scientific evidence and proof.

Why Greenwashing Is Harmful

The lines between green growth and sustainable development and greenwashing often appear rather blurred. While green growth and sustainable development focuses on economic growth and genuinely seeks to ensure the preservation of natural resources, it still very much relies on a guiding profit maximization model. Unfortunately, greenwashing, unlike green growth, is a brand and marketing tool, rather than genuine environmental work.  Greenwashing can take on many forms, including any strategy where companies simply make cosmetic and often inadequate attempts to be more environmentally conscious.

Companies employ green marketing techniques and resources only to make consumers believe that their practices are sustainable.  This practice is effective: over 66 percent of today’s consumers are willing to spend more money on more environmentally friendly and sustainable products. Greenwashing also creates cognitive dissonance among consumers when they are exposed to corporate greenwashing and later fed contradictory claims over what they saw, consumed or bought. People are bogged down by multiple environmental claims and challenges and are unable to distinguish between genuine and false claims.

The ultimate paradox and snub to any manner of environmental progress is the fact that oil companies invest $110 billion in new fossil fuels while spending $1 billion on green PR. These companies’ claimed environmentalism becomes a manner of virtue signaling as well as undermining the movement. Media conglomerates such as the New York Times and Washington Post continue to run branded content in support of oil companies like Shell, Exxon and the American Petroleum Institute.

Moreover, greenwashing is an influential tool for public lobbying, especially to manage and pacify public discontent. Along with their obvious economic and market upper hand, by using greenwashing, companies and political stakeholders can control the public’s reactions. This strategy lets companies successfully dodge concerns and claims about environmental impacts. For example, BP came up with a famous slogan in the 1960s, touting themselves to be ‘’beyond petroleum.’’ However, this marketing rhetoric was nothing but an empty industrial strategy, and BP’s petroleum output more than doubled between 1960 and 1970.

Industries only feed into public sentiment when they need to pander to either public concern or scrutiny. The US Chamber of Commerce remains one of the most strong corporate lobbies fighting to negate climate change legislation and policy. The mitigation of different forms of environmental policies and risk are also often selectively enforced at best. During the 2008 Presidential Elections, ‘Clean Coal’ became a new but misleading catchphrase. It involves the usage of carbon capture to reduce carbon emissions and is described as being a major decoy employed by politicians from investing in durable and long-term green energy and renewable technologies. Similarly, the Bush Administration’s Clean Skies initiative is said to have in fact weakened air pollution laws.

Politicians continue to add fuel to the fire by sowing doubts regarding the legitimacy of climate science and scientific research, with Texas Representative Bill Flores calling it ‘’petty politics based on dubious ‘agenda-driven scientific research.’’ Politicians also use climate agendas and green policies as a smokescreen for their intentions during elections and are unable to execute much of what they promised when they come to office. Greenwashing becomes a weapon of sorts to disguise political agendas.

Rather than making a commitment to do better and strive for environmental change, the media, politicians and corporations want to deflect and replace growing environmental concerns with green capitalism, once again looking to neoliberalism and the idea of free markets to continue to solve our problems today. Our internalized propensity to consume becomes the overriding force while making important choices and spending decisions today. However, despite greenwashing’s promises, individual and collective production and consumption still result in the negative externality of environmental degradation.

Environmental political theory offers a critique to this nature of unfettered and naturalized spending and globalized consumption pattern today.  The criticism proposes that greenwashing campaigns and advertisements put individuals on a pedestal where we fail to account for our society and community- another commonly held neoconservative attitude. Despite corporate greenwashing, oil and gas companies still continues to commoditize the earth’s natural resources. Eric Fromm proposes a Marxist analysis where individuals are alienated from a product as they know little about its origins and feel disconnected from it. Green advertising ends up weaponizing the perceived value of sustainability and ‘going green’ without giving consumers real awareness of what they might be consuming. It becomes yet another misleading marketing ploy.

One might even say that the 2019 attempt to revitalize the Green New Deal ultimately did not address the impacts of unfettered capitalism and consumerism on the world economy because it failed to regulate firms. It became yet another sustained way to greenwash capitalism and overconsumption. It inevitably led to the transfer of public funds to private capital without much policy toward alleviating the climate crisis and empowering citizens. Similarly, the EU’s green new deal is also being perceived in a similar light as it uses reshuffled EU funds and once again puts more money into the pockets of the private sector. It disproportionately results in mobilizing private funds while re-centering the risk from private stakeholder groups to the EU budget and consequently, allowing private investors to gain further. Boris Johnson’s ‘’green industrial revolution,’’ in addition, tends to gloss over key questions and issues on decarbonization and carbon capture technologies.

While trying to co-opt and embrace the aims ad objectives of climate activists today, the greenwashed realities of our fractured domestic and global environmental effort, unfortunately, come to light.  Even in an effort to finally transform current environmental discourse, we have found a way to spin the wheels of capitalism and add fuel to the fire of a vicious cycle.