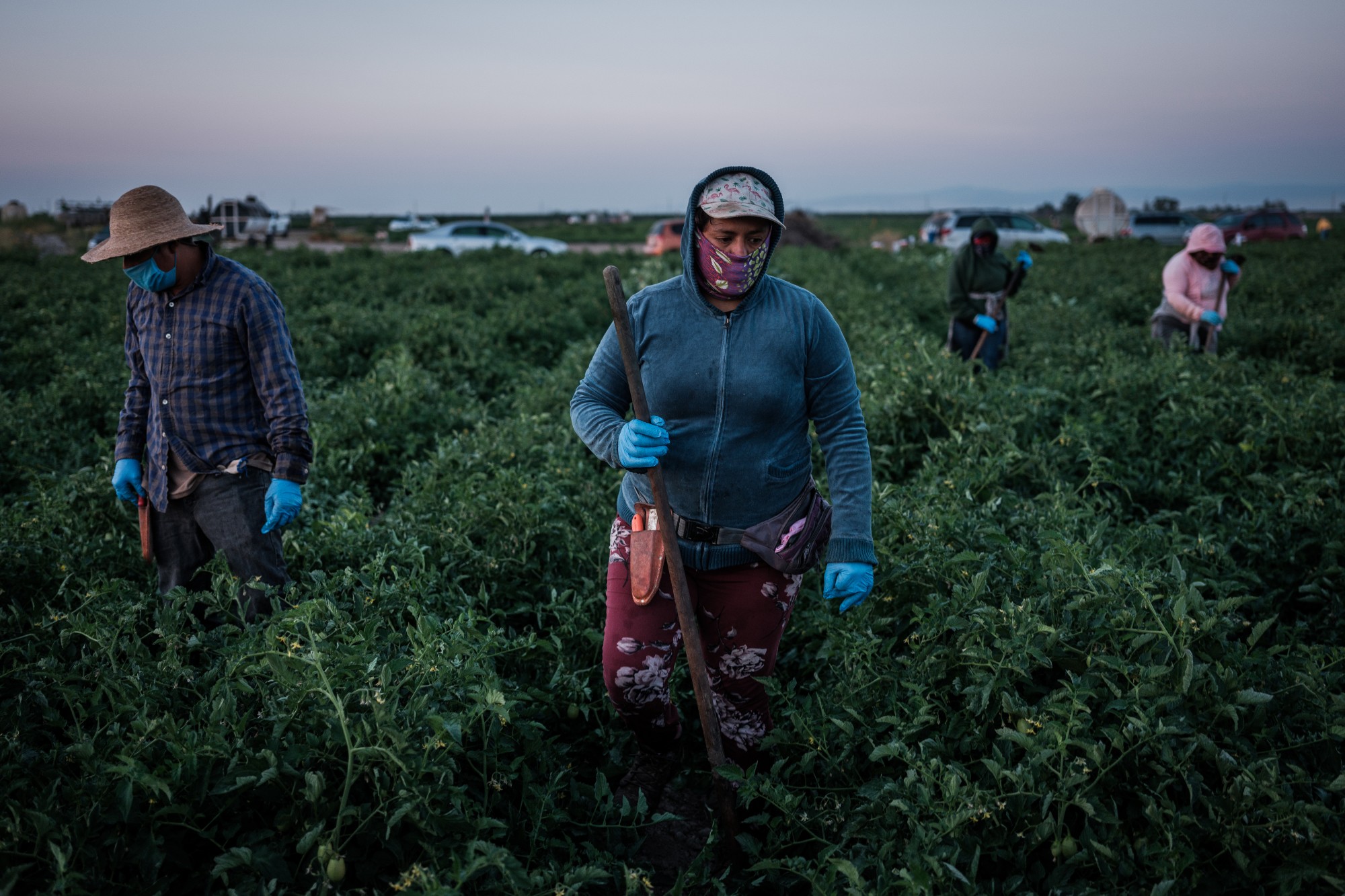 Farmworkers are a crucial sector of the labor force who often go without praise. Despite the harsh working conditions, low wages and the increasing threat of climate change, farmworkers are putting their lives even more at risk during the global pandemic. Farmworkers serve an essential purpose in our society as the backbone of our food and agricultural industries. These individuals  are incredibly essential and endure some of the most severe and dangerous conditions, yet they are largely excluded from government relief and benefits. Farmworkers are now facing two additional crises with little aid in sight: climate change and COVID-19..

Farmworkers are known to endure some of the worst conditions out of all the people in the labor force. In fact, they face multiple labor crises daily, such as pesticide exposure, long hours in the heat, low wages and no benefits. They are exposed to toxic chemicals from pesticide usage on the job and often even at home, as they typically live close to the fields, exposing themselves and their families to toxic pesticides. Up to 10,000-20,000 farmworkers experience pesticide poisonings per year. Many more see lasting, long-term health damages from this constant chemical exposure, such as cancer, asthma, Parkinson’s Disease, birth defects or neurological harms. Despite attempts, there have been relatively few successes at gaining worker or community protections against dangerous pesticide use. Additionally, they face long hours of hard labor in the heat and are exposed to the sun, leading to more potential health risks such as skin cancer or heat strokes.

Despite these dangerous conditions, farmworkers receive extremely low, unlivable wages and typically have no form of benefits, like paid time off or health insurance. Farmworkers are often paid per bushel/bucket; this is known as the “piece rate”. It is possible, and even likely, that a farmworker getting paid this way is making less than the minimum wage. A farmworker’s average median wage in California is $24,320 annually and $11.85 hourly. One single adult needs to make at least $14.99 an hour in California to make a living wage. These farmworkers are making much less and are typically trying to support a family on this wage that they cannot even support themselves alone on. Even further, benefits are relatively unheard of in this field, leaving these at-risk workers without healthcare, sick days or paid time off, among other things.

These workers also have very little legal/political representation, leaving them helpless to change the chronically poor working conditions. The majority of farmworkers are Latino and about 54 percent of them are U.S. citizens. Many immigrant farmworkers are on H-2A visas, which require employer sponsorship. Employers take advantage of this program and the immigrants’ sense of indebtedness due to the poor power dynamic the visa creates and adds to. Employers exploit their workers by threat and control of visas, and cycle immigrant workers to prevent them from gaining any social capital. Undocumented farmworkers face the most dire conditions with relatively few avenues to report or speak up against poor conditions due to fears of deportation or possible repercussions. This leads to a constant systematic cycle of unsafe and unfair labor conditions. The uneven and extreme power dynamics in agriculture make farmworkers one of the most vulnerable working communities in the country.

Now, farmworkers are facing two crises that worsen their existing conditions: COVID-19 and climate change. These two crises have global effects, but disproportionately affect our most vulnerable populations.

COVID-19 has impacted and infected farmworkers at enormous rates. It is very prevalent among agricultural workers, with an infection rate of 1,410 positive cases out of 100,000 compared to the rate in all other industries, which is 455 positive cases out of 100,000. This vast difference is mostly due to both working and living conditions that make it nearly impossible to maintain physical difference from others. Over 70 percent of the Monterey and Salinas regions’ agricultural workers live in crowded or extremely crowded residences. Many of these residences would be classified as unsanitary, lack basic utilities and are in isolated areas far from important services like hospitals or grocery stores.

Additionally, those on H-2A visas accept employer-provided housing and face variable and close-quarter conditions. These employers often provide housing situations that are not up to health and safety standards. Some migrant workers describe their experience being crammed into motels, with multiple men crowded into single rooms. Some shared beds, while some slept on the floor or the bathtub. “We were stacked on each other,” one migrant worker said.

Those not on visas struggle to find private housing. In California, farmworkers’ low wage will not get them much, often forcing them to accept less-than-acceptable conditions. Many even turn to living in their cars or outside wherever they can set up camp. Agricultural worker Romulo Muñoz Vasquez from San Diego County said, “There isn’t enough money to pay rent, food, transportation and still have money left to send to Mexico. I figured any spot under a tree would do.” This sponsorship and employer-provided housing program seem to be the biggest issue surrounding labor exploitation in this field, forcing employees to accept dangerous conditions for their survival.

These living conditions, as well as the close working conditions, have led to heightened COVID-19 rates. As essential workers, they do not stop working due to COVID-19, and when they are infected, many fear missing work due to possible repercussions such as not being able to pay their rent or their employer’s reaction. Additionally, even if they are sick, they typically do not receive health insurance from their employer and likely do not seek medical care out of fear of possible costs. These conditions, along with possible pre-existing medical conditions from working in the fields, make the impact of COVID-19 especially worrisome for these workers.

The COVID-19 pandemic is not the only crisis farmworkers are currently faced with. The effects of climate change in California have also begun to visibly affect agricultural laborers.

Agricultural hotspots have faced, and will continue to see, increasing temperatures. Currently, the average agricultural worker experiences 21 days a year where the daily heat index surpasses workplace safety standards. Research shows that these unsafe work days will almost double by 2050, with an expected change to 39 unsafe days. Heat stress has already been a major issue for farmworkers, and it is only getting worse every year due to climate change. Excessive heat exposure leads to dangerous health conditions, such as heat exhaustion, heat stroke, dehydration or skin cancer. Among farmworkers, heat stroke is the leading cause of death. Without adequate protections, farmworkers are put at more risk every year of these illnesses.

In California, we have begun to see the devastating climate effects that have led to increasingly disastrous fires every year. These fires begin to show us what farmworkers future conditions may look like if no action or protections are put forth. Farmworkers must work outside, and dangerous air conditions will only further impact their health; not to mention, many are already breathing-compromised due to pesticide exposure as previously mentioned.

Employers were supposed to provide N95 masks during fire season, but many workers reported never receiving one and working without adequate protections. When agricultural fields burn, the air becomes a toxic mix equivalent to smoking 20 cigarettes in less than an hour. Residents affected by fires in California near agricultural hotspots, such as in Sonoma, were evacuated from the area. Farmworkers, however, were still expected to work in the fields in these conditions. Reports claim that many workers were still being bussed to and from the fields as the fires burnt nearby with severe and dangerous air quality.

These workers face little protections, and the industry is not in the habit of looking out for them. Many workers are too afraid to speak out or miss work because of the possible loss of income, fear of deportation or other adverse reactions from their employer. Fires in California will only continue to get worse according to scientists, with predictions of more fire seasons with multiple large wildfires across the state at one time. Farmworkers will continue to be disproportionately impacted by climate change in California and are being put on the front lines, risking their lives to make ends meet. They need improved labor protections and conditions in order to prevail in the face of these crises.

Despite facing these crises head-on all at once, there has been nearly no governmental relief directed to farmworkers. The Coronavirus Aid, Relief, and Economic Security (CARES) Act brought much-needed relief to communities across the country, but excluded the undocumented community — which makes up a huge proportion of farmworkers — from critical relief. The California state government sent out very limited relief to the undocumented community, sending out $1,000 to about 150,000 families, only a small proportion of the overall community. Newsom also signed a package of bills aimed to relieve some of the farmworkers issues, such as workers rights education initiatives and quarantine housing, but they did not include any direct financial relief. Additionally, immigrant farmworkers are concerned about seeking medical care out of worries of being detained by Immigration and Customs Enforcement. Workers with visas and green cards are also worried about seeking governmental assistance due to the Trump administration’s “public charge rule,” which weighs immigrants’ use of public programs, including health care, against their citizenship applications. This formal rule is one of the many ways the Trump administration has targeted the Latinx community in the country, making immigrant farmworkers — even under a new administration in 2021 — increasingly worried to speak out against injustices in the field.

Farmworkers’ horrible labor conditions did not start with COVID-19 or climate change, but these disasters have further exacerbated the issues farmworkers have been dealing with, highlighting the need for massive labor reforms. Not protecting this vulnerable community has further inescapable implications for overall society as well. Their high exposure to COVID-19 will continue to lead to further stress and burdens on our health systems as they continue to get infected and spread infection. This continued push towards unsustainable labor practices will only continue to burden our food systems, which risks more people going hungry.

We need to fight for extensive labor and governmental protections for farmworkers in order to protect them and our vital systems from disaster. Farmworkers are an essential backbone to society — the reason most of the world has not gone hungry today — and they should be treated as importantly as they are. It is inexcusable that the US government, which touts that Americans have the freedom to pursue happiness and be protected by the government, allows such severe civil rights injustices in the agricultural field to continue.