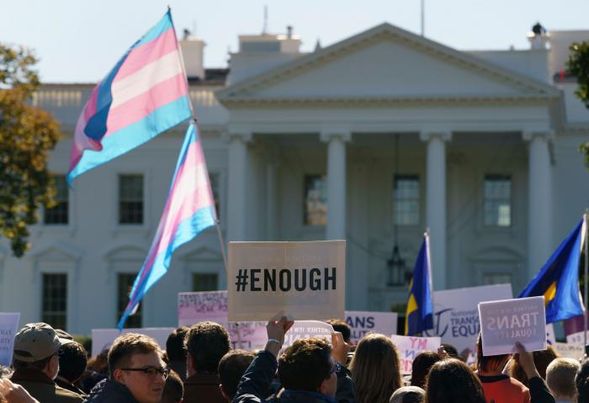 As COVID-19 Rages On, So Does the GOP’s Attack on Trans Rights

During the early months of 2021, a notable amount of anti-transgender bills have been introduced in state legislatures across the country — as of mid-March, bills targeting the transgender community have been proposed in at least 20 states. Although most of these bills have not been voted into law yet, their introductions alone represent an alarming increase in anti-transgender sentiment during a time when transgender Americans are forced to confront disproportionately high rates of violence and discrimination. The majority of these bills specifically target trans children and teenagers and are aimed at preventing them from playing on sports teams and using restrooms that correlate with their gender identity or receiving transition-related healthcare.

Republican state legislators in Georgia recently introduced HB-372, which also seeks to ban transgender student athletes from participating in school sports teams that correspond with their gender identity. Language in the bill proposes that high school athletic associations appoint a “panel of three physicians” to “make recommendations” about “information regarding a student’s gender based on [their] reproductive organs, genetic makeup, and other medically relevant factors”. This bill exemplifies the hypocrisy and dishonesty of anti-trans advocates — in purporting to “protect” children, legislators are literally invasively violating the privacy of children (the bill also states that physicians can’t be held liable or disciplined as a result of “activities authorized or required” by the bill).  Transgender minors needing to have information about their reproductive organs “reviewed” by adult physicians just so they can play school sports is a disingenuous and overtly discriminatory overreaction. If HB-372 passes, legal experts believe that it will be found unconstitutional; however, the fact that it was introduced at all demonstrates the frightening implications of anti-trans sentiment in the state.

The Alabama Senate Health Committee recently approved a bill that would ban transgender youth from receiving transitionary medical care. The bill, known as SB-10, overwhelmingly passed with a vote of 11-2 in favor of it in the committee. Under SB-10, doctors who provide puberty blockers or hormone replacement therapy to transgender minors — even if the minors have consent from their legal guardians — will be criminalized and face up to ten years in prison. Although the bill was introduced under the guide of protecting children’s health — it is called the “Vulnerable Child Compassion and Protection Act” — in reality, it endangers and needlessly harms children. According to the Alabama ACLU, criminalizing transition-related medical care could cause a spike in suicides and mental illness rates for transgender children, who are already at an increased risk of experiencing depression, anxiety and suicidal thoughts related to gender dysphoria. On March 2nd, SB-10 passed in the Alabama state legislature, making Alabama one step closer to being the first U.S. state to impose a ban on transition-related medical care for trans youth.

In South Dakota, Republican lawmakers considered HB-1217, a bill that would ban transgender girls from playing school sports on women’s teams. Proponents of the bill claimed that it would “promote fairness in women’s sports,” and they seek to require student athletes to prove their biological sex using their birth certificate before being allowed onto school sports teams at any level, from elementary to college. On February 25th, HB-1217 passed the South Dakota House of Representatives by a significant margin of 50-17. Although the bill initially failed to pass out of a committee in the South Dakota Senate, on March 4th, the sponsors of the bill forced the bill onto the floor for a debate and vote anyways. On March 8th, the bill passed the Senate vote and South Dakota Governor Kristi Noem announced that she would “celebrate International Women’s Day” by signing it. One might be inclined to wonder why the South Dakota state legislature is spending such a significant amount of time trying to deny opportunities to trans children, especially since according to the executive director of the South Dakota High School Activities Association, there are currently no (openly) transgender students participating in school sports in the state.

In Iowa, SF-224, a measure seeking to require people to use school bathrooms corresponding with the gender on their birth certificate passed in a subcommittee vote and will be voted on by the entire state legislature. Although proponents of the bill assert that the measure is intended to prevent women and girls from being sexually assaulted, there has not been an increase in reported restroom sexual assaults since gender identity-related restroom protections were added to the Iowa Civil Rights Act in 2007. Nor have there been any reports of people pretending to be transgender in order to enter women’s bathrooms.

Similar bills aiming to ban transgender students from playing on sports teams, receiving transition-related medical care or using bathrooms that correspond with their gender identity have been introduced in Kentucky, Texas, Utah and several other states. In some ways, today’s anti-trans sentiment is reminiscent of conservative discourse about gay and lesbian people in the 1990s and early 2000s that compared homosexuality to a mental illness or pedophilia. As same-sex relationships have become more normalized and accepted (although they are still stigmatized as well), it seems as though “debates” about transgender rights have become a new mainstay of the “culture war”. To be clear, anti-trans discrimination is definitely not a new phenomenon, but it has gained more visibility as more people feel comfortable being openly transgender and many Americans who identify as liberal or progressive are now generally accepting of trans rights.

According to trans activists, the wave of bills aiming to curtail transgender rights reflects the growing anti-trans sentiment that has been heavily promoted by conservative groups and is systematically infiltrating mainstream Republican policy platforms.

Transgender advocate and lawyer Chase Strangio describes the recent onslaught of anti-trans bills in state legislatures as the result of a “well-funded, well-coordinated anti-trans movement” made up of far-right social conservatives, anti-trans ‘feminists’ and “the self-victimized public intellectuals who have made it their life’s work to debate trans existence.” The language in several recent anti-trans bills in state legislatures is remarkably similar and nearly interchangeable, and can be traced back to templates and talking points provided by the Alliance Defending Freedom, an influential Christian conservative nonprofit organization. The ADF, which has been described as a “hate group” by the Southern Poverty Law Center, has litigated against and funded efforts to roll back LGBTQ+ rights for decades. Anti-trans activism also frequently weaponizes feminist arguments by claiming that the inclusion of transgender women somehow oppresses women who were assigned as female at birth.

On the national level, Rep. Marjorie Taylor Greene (R-FL) recently faced widespread criticism after posting a mocking anti-transgender sign outside her office, which is directly across from the office of Rep. Marie Newman (D-IL), who has a transgender daughter and displays the transgender flag. At a recent hearing for the confirmation of Dr. Rachel Levine for assistant secretary of health, who would be the nation’s first openly transgender federal official to be confirmed by the Senate, Sen. Rand Paul (R-KY) compared transition-related healthcare to “genital mutilation”. And, on March 5th, Republican senators introduced an amendment to the $1.9 trillion COVID-19 relief bill that would deny federal funds to states that permit transgender girls to participate in school sports — something entirely unconnected to COVID-19 recovery or helping states safely reopen. Although the amendment narrowly failed, its introduction alone exemplifies how anti-trans discrimination has become such a salient issue in conservative circles, to the point where Republican lawmakers (and Democratic senator Joe Manchin) felt justified in singling out trans children in a high-priority, unrelated relief bill just so they could obtain political clout with their base.

Moreover, proposed anti-trans state legislation can be interpreted as backlash to what conservatives may perceive as a growing legal and political acceptance of the transgender community. In June of 2020, in Bostock v. Clayton County, the (majority-conservative) Supreme Court concluded that transgender employees are protected from discrimination under the Civil Rights Act of 1964. Notably, the majority opinion in Bostock was written by Justice Gorsuch, who was appointed by former president Donald Trump and is one of the most conservative justices on the Court. On his first day in office, President Biden signed sweeping executive orders protecting the transgender community from discrimination and rolling back anti-trans policies instituted by the Trump administration. Biden has formerly stated that anti-trans discrimination is “the civil rights issue of our time,” and his administration has committed to protecting trans rights. And, on February 25th, the House of Representatives narrowly passed the Equality Act, an unprecedented bill decades in the making that prevents discrimination based on sexual orientation and gender identity. While these advances are momentous and have been celebrated by many, they may not have their intended impact if conservative factions in state legislatures respond by aggressively attempting to restrict and retrench transgender rights.

These anti-trans bills will also have reverberating impacts far beyond trans people being unable to access sports teams, bathrooms, or health care: the proposed legislation will further normalize the intensified surveillance and control over anyone who doesn’t fit into binary definitions of sex and gender. Support for equal rights for trans people is overwhelmingly popular across the United States, but fringe state legislators clearly primarily seek to appease their reactionary base instead. The fact that numerous state legislatures are spending an inordinate amount of time during the first few months of their terms on a “culture war” issue such as anti-trans legislation when they might have more pressing issues — such as the ongoing pandemic — to deal with exemplifies the politics of today’s Republican Party.  If anti-trans legislation passes, it will do nothing but further codify discrimination into American law and make life unnecessarily difficult for transgender people, who just want to live their lives without constant harassment.