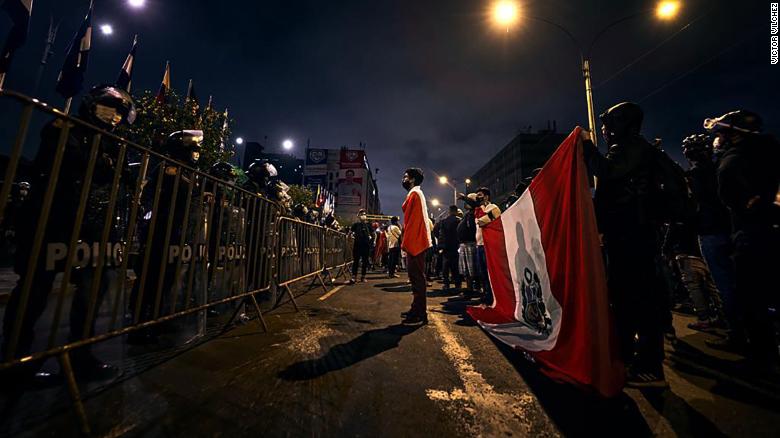 On November 9th, 2020, the President of Peru, Martín Vizcarra, was ousted from office by the Peruvian Congress. Vizcarra was popular and supported by the majority of constituents due to his pledge to dismantle corruption by government officials. In his place, Congress appointed a little-known politician named Manuel Merino. Both the appointment and his Cabinet selections caused mass protests throughout the nation, sparking both his resignation and a third presidential appointee within one week. The fragility of the government has the potential to plunge the country into a familiar state of volatility and civil war that has plagued the country since the 1940s.

Peru has had a long history of military governments and coups resulting in widespread violence. From 1945 to 1975 there were three coups, one of which overthrew the first free and fairly elected civilian-ruled government. Military control dominated the government in Peru, often replacing a government that was lawfully elected and appeared to have turned a page on the coups. For many indigenous communities, the democratically elected governments pledged to redistribute land that had been allocated to produce companies. Once military rule was established, the socialist land reforms were generally overturned, leading to further repression, economic hardship and racial inequality.

In addition to a variety of inequalities, the military governments relied on repressive tactics to maintain their rule and prevent insurrection. By 1980, there was a prominent guerilla movement called the Shining Path that mounted a violent resistance to military rule of General Morales Bermudez. The group is commonly dubbed a revolutionary communist group whose end goal was to violently overthrow the government and replace it with the rule of the proletariat in order to arrive at a form of communism modelled after Maoist China, Stalinst Russia and the Khmer Rouge in Cambodia. The group first established a community of believers among college students in San Cristóbal of Huamanga University, where the founder of the Shining Path, Abimael Guzmán, taught philosophy. Guzmán and his supporters moved to the mountainous town of Ayacucho where they began to arm indigenious communities in rural and poor areas. Rather than participating in the elections of the 1980s, Shining Path opted to launch a guerrilla campaign in remote areas in the Andes. Support for Shining Path came from its organization and focus on restoring native languages to indigenous communities in contrast to Spanish-speaking elites in the capital of Lima. This campaign led to a protracted war between the military government and the Shining Path, causing thousands of casualties, disappearances and years of conflict. The war continues to haunt Peru to this day, especially during periods of instability seen recently.

Crackdowns on the Shining Path began in earnest by 1982, resulting in many deaths and disappearances in retaliation for the guerrilla resistance. One count totaled 4,000 political deaths by 1990, the year that saw Alberto Fujimori elected on an anti-corruption platform. Fuijmori was a divisive president, in that he was elected on an anti-corruption platform and moderate ideas for reform. After two years in office, he suspended the constitution; a new single chamber Congress was created, and thousands of Shining Path guerrillas were forced to surrender. Guzmán was also arrested in 1992, which had little impact on the activities of the Shining Path. In 1995, Fujimori was elected to a second term and pardoned many people accused of human rights abuses.

Fujimori stayed in power until 2000, when Congress sacked and declared him morally unfit. He was forced to flee to Japan. At the time, much like the current scandal, many top officials were embroiled in corruption and bribery scandals. In 2001, the first Amerindian president of Peru, Alejandro Toledo, was elected and ran on a centrist platform. His term was rocky, marred by environmental protests and accusations of electoral fraud. By 2003, according to BBC, the “Truth and Reconciliation Commission’s inquiry into atrocities during the 20-year war against Shining Path rebels concluded that an estimated 69,280 people were killed.” By 2005, the Peruvian Congress earmarked $800 million dollars for the victims of the guerrilla war. Since then, the nation has had periods of stability followed by violence and mass protests against various governmental policies, despite holding multiple democratic elections.

The current period of unrest is not new to Peru. What is concerning about the trajectory of the present power vacuum is the reliance on forms of oppressive dictatorship to maintain the peace. Over half of the members of Congress are under investigation for corruption, and former President Vizcarra has pledged to remove the legal protections for politicians, in an attempt to eradicate corruption. Many citizens believe that his removal from office was the direct result of his crusade to end government corruption. The instability following both the pandemic and his removal has unnerved the public, catalyzing large scale protests against the government, which began November 13th and have not ceased. The police have freely used tear gas and rubber bullets against the protesters, causing two deaths. For a nation tarnished by a history of civil unrest, repression and corruption, the current situation is a terrifying reminder that despite youth movements and protests, some traditions are too deeply entrenched in a nation’s past to be removed.