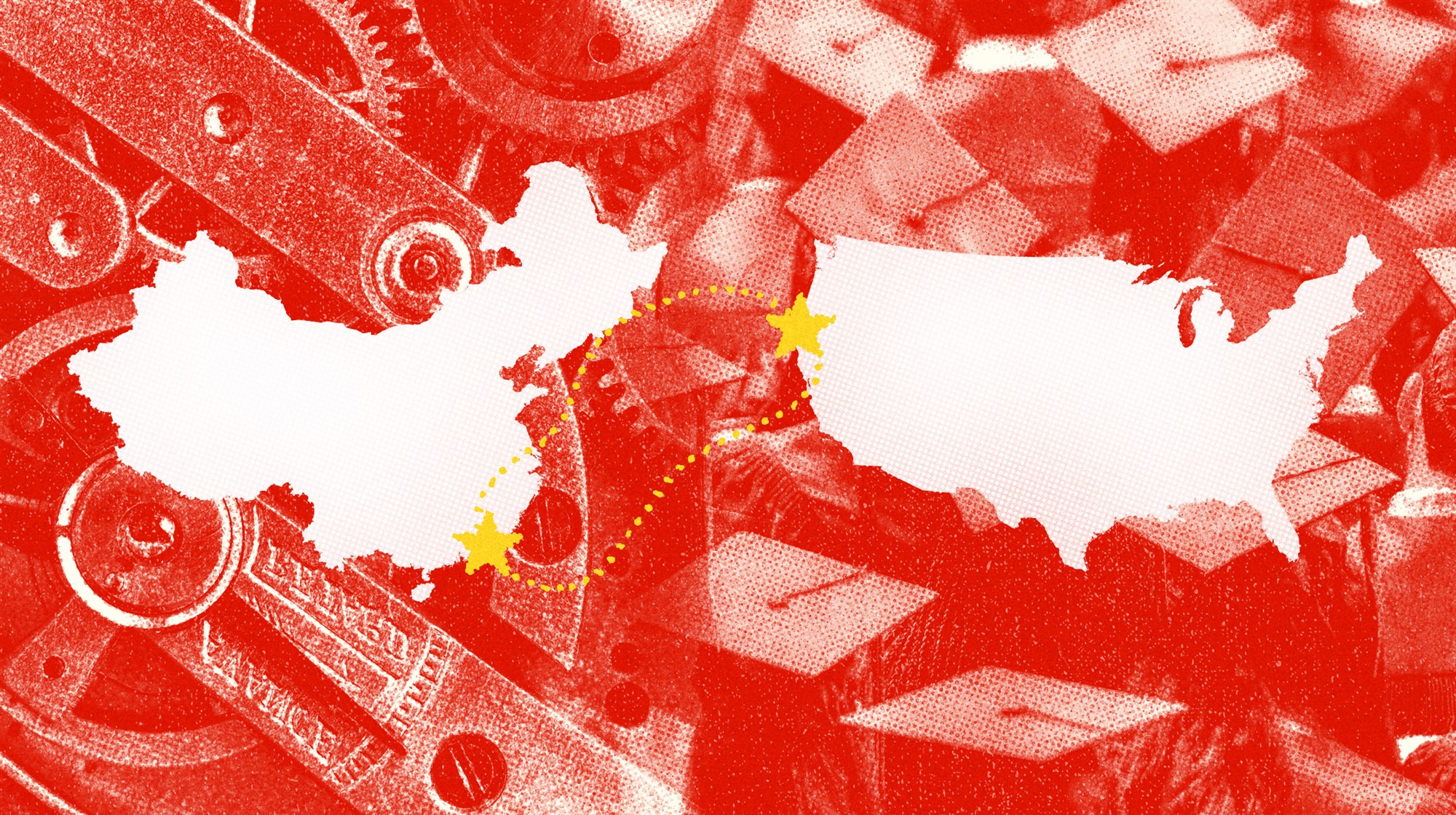 This publication, the Berkeley Political Review, is situated within the Bay Area, a section of California that is best known for its incredible innovations in the technology field. The ecosystem created in Silicon Valley is unlike any other comparable industry ecosystem in the world and has led to the creation of world-conquering technology companies.

Focusing solely on the unique dynamics of Silicon Valley, marked by the presence of large venture capital firms and pipelines from renowned universities into industry, helps explain why this area grew to be so prominent within the U.S. technology field. However, it fails as an explanation for why the U.S. as a nation is so far ahead of the rest of the world in that very field.

Half of the top ten highest grossing technology companies are American. The U.S. is home to the tech giants Apple, Amazon and Microsoft, along with a range of smaller companies with large cultural impacts — Facebook, Twitter, Instagram, Snapchat, among others. This dominance gives the U.S. a lot of power — the U.S. is uniquely positioned to control the regulatory and development environment of technology for the foreseeable future. This has held true for decades, wherein the U.S.’s “soft power” has been enhanced through the companies that control global communication, media, entertainment and business.

Why? The U.S. doesn’t dominate every industry: most are decently competitive between the U.S., Europe, and other nations like China. So it can’t be merely its GDP and development. Nor can it be its size — even if every other nation was smaller, the technology industry is one that does not make use of massive economies of scale. It all fits, predominantly, in a single bay.

This generates a deeper question. Why does the U.S. have so much high-quality technology talent? Finally, we have reached a question with a simple answer — immigration.

Historically, the reason the U.S. has dominated the technology industry is that top-tier talent from all over the world flows to the U.S. to study and work. And U.S.-originated talent doesn’t leave. Once foreign talent has entered the U.S. technology ecosystem, it also doesn’t leave. Not only does this huge amount of talent lead directly to major technology innovations, it also weakens technology development in competitor states. After all, every programmer that leaves China for the U.S. is one more programmer for the U.S. and equally one less programmer for China.

Before we dive into the distribution, there is one important note to make: this trend applies to every nation. Every nation, to different degrees, is losing talent to the U.S. while having difficulty retaining its own talent. Yet the most important and dramatic trend is between the U.S. and China. Historically, the entire technology human capital market has been typified by one trend: that of a massive “brain drain” from China to the U.S.

Chinese talent has powered U.S. ascendancy while hampering China’s own technological ambitions. In the remainder of this article, we are going to explore three things: What does this trend look like? What caused this trend? And finally, will this trend continue into the future?

Studies have attempted to track the flow of talent, and they tend to focus on “top-tier” talent, which is judged by a complex methodology based around research publication.

What does the data show? The below data comes from the MarcoPolo AI Talent Tracker project, from the University of Chicago.

If not the U.S., where does this talent come from? Well, everywhere, but mainly China. China is the lead source of talent worldwide. 29 percent of top-tier researchers received their undergraduate degree in China — the largest share of the talent pool of any nation. Yet here the brain drain dynamic kicks in. 56 percent of those researchers then move to the U.S. That’s right. A full half of Chinese-originating talent moves to the U.S. That is a major blow to China and a major gain for the U.S.

Within the U.S., the source of talent is nearly evenly divided between the U.S. (31 percent) and China (27 percent). That is, U.S. technology companies receive nearly equal amounts of workers from the U.S. and China.

This comes at a stunning loss for China. 88 percent of Chinese PhDs in artificial intelligence end up working in the U.S.; China retains only 10 percent. This is the same for every country — 85 percent of non-Chinese artificial intelligence PhDs work in the U.S. This is not merely a loss of talent; it is a loss to the nations of the years of investment put into educating the individual, who then uses the skills they obtained in their home country to contribute to the American economy.

What Causes this Trend?

The first, and potentially most important, push and pull factor is cost. U.S. institutions have historically been able to pay higher salaries along with a host of other benefits. As discussed later on in the article, the centrality of salaries can be seen in the Chinese response to the brain drain, which revolves almost entirely around making Chinese firms price competitive.

Another important factor that both pushes and pulls is academic prestige and quality. American institutions are considered superior on both those metrics, and the integrated nature of American talent pipelines means that once you enter the academic world in the U.S., you are naturally and efficiently funneled to other institutions and firms. Conversely, barring a few notable standouts that have mainly become successful recently, Chinese universities are less renowned and in general are rated poorly in comparison.

Historically there were also several unique Chinese push factors. One of which is air and environmental pollution. Air pollution concerns force Chinese institutions to bear higher costs, typically regarding medical care and risk alleviation, and the increased quality of life in nations with environmental protections is a major draw for Chinese talent.

Additionally, the dynamic that makes the U.S. able to draw such talent cannot be replicated in China. The Chinese immigration process is incredibly restrictive; indeed, it is one of the most restrictive out of the economically advanced nations. Maintenance of a homogenous Han Chinese majority is a major political point domestically, and as such the Chinese government is very anti-immigrant. As such, the benefits of immigration only accrue to the U.S. It is a loss for China that, due to the political makeup of the ruling coalition, it won’t be able to repair anytime soon.

A final push factor from China historically has been a lack of a culture of innovation in Chinese institutions. There hasn’t been institutionalized academic freedom and a systematic promotion of innovation that makes risks worthwhile.

Thus, for much of the history of the modern technology sector, cost, prestige and a welcoming immigration system have pulled talent to the U.S. Conversely, air pollution, failures at those above factors and insufficiently rewarding ecosystems have pushed talent away from China.

Will this Trend Continue?

I used the term “historically” quite often on purpose. There is evidence that this trend is beginning to decay. An increasing amount of Chinese students (83 precent) are returning to China after their studies (based on the five years prior to 2017).

Part of the reason is that China has been working on alleviating its push factors. In recent years, a huge amount of Chinese investment has been focused on increasing the quality and prestige of its academic institutions and making Chinese firms more financially competitive. The centrality of these factors to talent flows can be seen by how such efforts are working.

The Chinese government views the brain drain as a strategic weakness in its strategy to improve its technology capabilities and has thus begun directing billions of dollars in funding to attract and retain talent. At the same time, the Chinese government has been working on environmental protection and has attempted to institutionalize competitive ecosystems similar to those found in Silicon Valley. This ecosystem integration approach has typically taken the form of an integration between academia, state-owned enterprises and the military.

With the push factors alleviated somewhat, it is only natural that more students choose to remain in China. Yet there was one other reason that the U.S. was retaining so much talent — its permissive immigration system. China can’t influence that directly, and it seems unlikely to change its own policies.

So the U.S. went and shot itself in the foot anyways, striking the very heart of American technological supremacy.

The structure of the immigration system is one of the remaining pull factors to the U.S., alongside cost, academic quality and quality of life, all of which remain comparable. In fact, it may be the primary thing leading to the U.S. holding its position. Which is why the Trump’s administration’s crackdown on Chinese students was remarkably short-sighted and foolish, even judged by the goals it was nominally trying to achieve.

China poses a very real national security threat and has attempted to steal information from academic institutions and American firms, occasionally doing so through academics and students. The general national security threat from China cannot be discounted. It was in this environment that the Trump administration ordered restrictions on Chinese student visas as part of a general crackdown. This was, of course, also driven by domestic politics that impelled President Trump to take a harder line on China and was part of a general attempt to weaken Chinese technological development by attempting to stop Chinese students from receiving a U.S. education and then using it to promote Chinese interests (the general strategy of the U.S. in reverse, of course).

Yet this policy is completely counterproductive, putting aside the fact that the vast majority of Chinese students and academics have no intention of spying for the Chinese government. Chinese students have been the backbone of the American technology industry. They contribute billions to the U.S. economy annually. Most importantly, they are the key to maintaining technological supremacy over China, and if that truly is the Trump administration’s goal, then Chinese students should be welcomed and shepherded, not rejected. The more hostile the Trump administration makes the environment here, the more it dovetails with the Chinese priority of retaining Chinese talent and enhances their attempts to alleviate push factors by creating an American push factor. It will only accelerate the decline of the comparative American technology advantage. The losers will be the United States and innocent Chinese students seeking opportunities. The only winners will be the Chinese Communist Party.

With the Trump administration on its way out, there is hope for this to change. The Biden administration may reverse the moves made by the previous administration. Yet it is unlikely to change much. The Chinese home attempts to retain talent are working. The Trump administration’s reckless Chinese immigration policy, designed primarily to rally the base and not to respond to a legitimate threat, may have been the final nail in the coffin, and the dynamics of international technology talent flows will likely not be the same again.