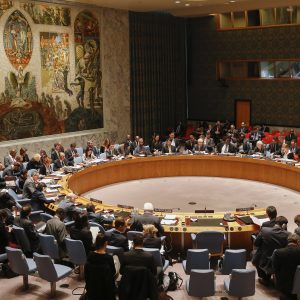 The United Nations: Is It As United As We Think?

On October 24, 1945, fifty nation representatives at the United Nations Conference on International Organization in San Francisco collaborated to create the United Nations. With supporting signatures from China, France, the Soviet Union, the United Kingdom, and the United States, the United Nations became the global governing force. Following World War II, the world needed a system in which world leaders could negotiate, compromise, and transparently communicate; the UN became a beacon of hope that diplomacy and peace would be handled on the world stage. However, the establishment of the U.N.’s Security Council has raised questions on the power imbalance of the allegedly unifying international organization. These questions have spilled over, challenging the effectiveness of the United Nations at peace-building, security, and promoting globalism.

The Security Council Tips the Scale

So far, members of the Security Council have used the veto power 293 times. Essentially, this veto power has placed the authority to override the United Nations’ decisions in the hands of five global superpowers.  Consequently, the veto has repeatedly created an imbalance of powers in the international community during world conflicts. Israel has launched airstrikes, raids, and fire over demonstrators, killing 139 Palestinian demonstrators and injuring over 5,000 between March and November of 2019. However, when the UN Security Council proposed resolutions condemning Israel’s brute force against Palestinian civilians, the United States used its veto power to overrule the resolutions. President al-Assad’s regime in Syria used chemical warfare against his own citizens, but the Security Council did not condemn him, because Russia and China vetoed Security Council resolutions that would have sanctioned his regime.

Ultimately, these two instances are not unique: the Security Council has repeatedly interfered in conflict resolution and minimized progress. The structure of the United Nations in which five nations have more authority over the other 188 members of the institution perpetuates a lopsided dynamic in the international community. This power imbalance has tipped the scale to allow hundreds of vetoes from five nations to change the course of history for the entire world.

The Benefits of the UN

The United Nations has strived to attain global order and has made significant progress in creating a stage for negotiations and treaties to avoid another world war. The Comprehensive Nuclear-Test-Ban Treaty has been critical in making progress toward nuclear disarmament in conflicts to prevent civilian casualties for decades. Both the Vienna Convention and Montreal Protocol have made strides toward protecting the Earth’s ozone layer from global warming. Furthermore, the World Food Programme “is the difference between starvation or a nourishing meal for hundreds of thousands of children”. Despite the realized progress due to the United Nation’s efforts, a quieter subject is the criticism toward the United Nations and its initiatives. The skepticism regarding the UN’s efficiency from researchers, diplomats, and world leaders stems from an array of factors and concerns about both fiscal and intangible costs.

Looking at the Costs

Accounting for inflation, the UN annual expenditure is now 40 times higher than it was in the 1950s. The member nations agree upon the regular budget every two years to finance the UN’s administration, subcommittees, and peace-building operations. With such a hefty expense, which includes $9bn annually allocated peacekeeping alone, it’s crucial to consider if the money is well-spent. Moreover, when many view the United Nations as inefficient for its role, criticisms are inevitable.

Experts have argued that the United Nations is too ambitious in its goals, falling short of successfully negotiating with states who have ignored UN mandates. Complimentary UN officials and officers have criticized the United Nations Secretary-General António Gutteres for not prioritizing human rights in his agenda and even choosing not to condemn blatant human rights violations, such as the Uyghur concentration camps in China, to avoid risking his diplomatic initiatives. Amid the COVID-19 pandemic, the United Nations has failed to take action, largely attributed to the lack of global initiative from the Security Council.

For 75 years, the United Nations has served as the most powerful body in the global sphere, and its Security Council is its most powerful arm. This power dynamic has distorted the United Nations into leadership by dominant states and submission by the other 188 nations. The decision making authority of the United Nations is too heavily in the hands of five nations. The organization needs to adopt democratic processes within itself, allowing the entire General Assembly to overrule the Security Council vetoes with a checks and balance system. Although President Franklin D. Roosevelt coined the term ‘united’ nations in January 1942, the U.N.’s contemporary presence on the world stage has shed light on the reality that the institution is not as united as we might think.