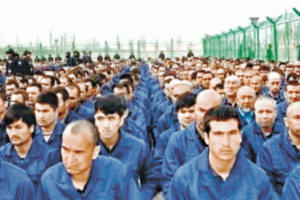 It started in 2017. Qelbinur Sedik was 47 and a teacher at Uighur Muslim internment camps in Xinjiang. Sedik was told she was required to get an IUD inserted to prevent her from getting pregnant. The IUD caused bleeding so she had it illegally removed. A year after that, she was routinely checked for an IUD and forced to get another. At age 50, she was forcibly sterilized.

What’s Going on in China

Qeulbinur’s story, however, is not unique. Rather, it is all part of a larger Chinese government-propagated campaign against Uighur Muslims. Uighur Muslims are a Muslim minority in China who mainly reside in Xinjiang, a territory of China. In total, 11 million Uighurs live in Xinjiang. At least 1 million of them have been forced into internment camps since 2017. According to another source, that number may be more like 3 million. Uighurs are seen by the Chinese government as disloyal to the Communist Party. Following 2013 and 2014 terrorist attacks by militant Uighurs, China has also labelled all Uighurs as a national security threat.

In response to China’s concerns about the Uighur community, a series of “re-education camps” have been established. A report by the Australian Strategic Policy Institute estimated there were around 380 such facilities in Xinjiang. Initially, the Chinese government denied the existence of these facilities, but photo evidence caused it to reverse its statement, calling them “re-education centers.” Others, specifically within the Uighur Muslim community, would use the term internment or concentration camp to describe them.

Inside these camps, Uighur Muslims have suffered human rights atrocities at the hands of the Chinese government. Conditions are destitute, with limited access to water and bathrooms. Uighurs are also being forced to take part in medical procedures and experiments against their will. Medications and vaccines are tested on Uighurs without their consent. Aside from this, women have endured forced sterilizations, forced abortions and forcibly inserted contraceptives. At the same time, Uighurs are simultaneously being stripped of their religious identity. All Uighur religious activity has been declared by China. The call to prayer has been silenced, while dozens of mosques are being destroyed or turned into karaoke bars and restaurants. In the internment camps, Uighurs are forced to drink alcohol or eat pork, practices forbidden in their religion. During Ramadan, Uighurs have been forbidden from fasting. Even newborn babies cannot be named any name with Muslim ties or connotations. Systemic oppression is denying Uighurs the values and practices that define their religion and culture.

During the period since 2017, mass rape allegations against the Han Chinese population have risen coming from the Uighur Muslim community. Many Uighur families are being assigned Han Chinese men to live in their homes as a “relative” to supervise them. Oftentimes, these men sleep in the same bed as Uighur women and sexually assault them. Because the “relatives” are assigned by the government, the women have no way of preventing this or taking action against their rapists. This is mass rape that is being perpetuated by the Chinese government, violating international human rights standards.

The Chinese government is also taking action to reduce the birth rate in the Uighur community in an act of demographic genocide. From 2015 to 2018, births in majority Uighur areas fell by 60 percent. This compares to a 4.2 percent decline in births across all of China. The nearly 15x decrease in birth rate is evidence that China is trying to systematically decimate the Uighur population. China is employing multiple ways to accomplish its goal of decimating the Uighur population. Mass incarceration and factory work are two of the most prevalent methods. Half of China’s prison population is Uighurs or similar other Muslim minorities. Millions of Uighurs are also being forced to work in factories as slaves to the government.

What the International Community Can Do

The actions against Uighurs have sparked international attention. 22 countries signed onto a letter from the UN condemning the actions China’s leaders have been taking. At the UN General Assembly, the US also condemned China and later became the first country to impose sanctions against Chinese officials who are directly affiliated with the events in Xinjiang. However, 37 countries have come to China’s defense, even going so far as to praise Chinese human rights practices. The Chinese government adopted an official policy that states it has released all detainees from the internment camps, claiming that  detainees are now able to reenter society as “reformed citizens.” At 70 internment sites, some of the security infrastructure has been removed. However, many are skeptical of China’s claims. From July 2019 to July 2020, 61 detention centers were expanded and 14 detention centers have ongoing construction. Timothy Gorse, a professor at the Rose-Hulman institute of Technology, said that “some detainees have been released, others have been placed in factories, while others still have been sentenced.” He has called present day “a new stage in the crisis.”

The actions of the Chinese government against Uighur Muslims violate international human rights law and accordingly should be considered genocide. In no circumstances should the international community sit idly by while genocide goes on underneath its nose. Placing sanctions against Chinese officials who support these policies in addition to announcing their intent to boycott the 2022 Olympics are actions that all nations should be taking. Specifically, countries should make their objections known by placing targeted sanctions against the Xinjiang territory. Xinjiang is an oil-rich territory and China’s largest supplier of natural gas. Two important exports from Xinjiang are cotton and tomatoes. By boycotting oil, cotton and tomatoes from Xinjiang, nations can make their human rights concerns heard.

If China takes no action to remedy the situation and continues to persecute the Uighur population, prospects for escalation should be on the international bargaining table. There is a moral imperative for such action. Vox wrote an article recommending five strategies through which the United States could help the Uighurs. These included forming a coalition of countries to put pressure on China, aiming to injure China economically by not supporting Uighur forced labor and refusing to provide assistance or support, publishing intelligence documents to capture the atrocities being committed against the Uighurs, limiting China’s influence in the UN, and supporting Uighurs by making the US a safe haven for Uighur refugees. Any nation that claims to value democracy and freedom, such as the United States, needs to stand with Uighurs against the atrocities currently being committed by the Chinese government. When describing the actions of other countries in the situation, Qelbinur Sedik said it best when she mused: “I wonder why they keep silent.” The time to speak up is now and it falls on everyone to do so.