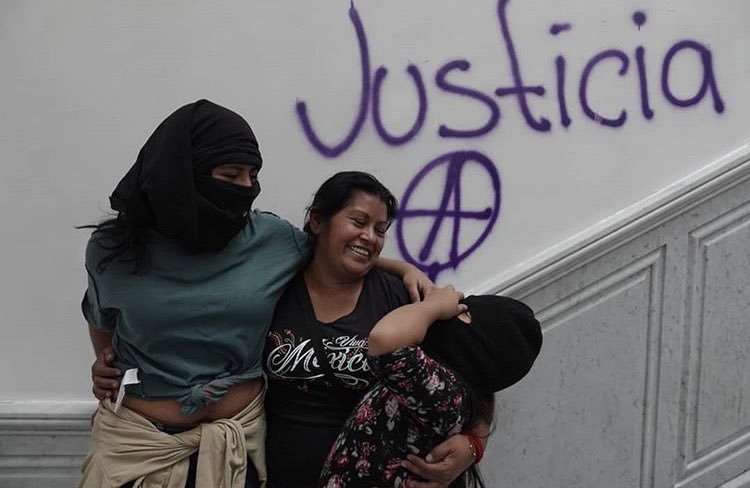 This past year Mexico has seen a precipitous rise in the amount of violent crimes committed against women, consequently spurring a vigorous feminist movement. Last month, members of the feminist group “El Bloque Negro” led a protest that culminated in the takeover of Mexico’s National Human Rights Commission (NHRC) building. In a display of solidarity and grassroots activism, the women transformed the government building into a shelter for women. While the activism is inspirational, the event’s necessity is infuriating.  Authorities and government officials operate with a complete lack of accountability, which subsequently leads to people committing femicide with impunity in Mexico. The takeover also reflects the frustration women continue to feel towards a government that has, for all intents and purposes, left them out to dry. “[T]his institute is the one that is supposed to protect human rights. The one that is supposed to help us. And they’re not doing it,” says 26-year-old Cali, a member of “El Bloque Negro.” While the violence some Mexican women experience is garnering more attention recently, this is by no means an issue unique to the contemporary generation. In fact, years of impunity have emboldened perpetrators of these heinous crimes to continue to treat women more like property than actual human beings. Mexico, as well as society as a whole, is faced with the disappointingly persistent question: for how much longer are we going to allow women (in particular women of color) to senselessly live in terror?

The World Health Organization defines femicide as, “[the] intentional murder of women because they are women, but broader definitions include any killings of women or girls.” In Mexico the number of women murdered as a result of their gender reached 375 in the first five months of this year. In February alone, there were 91 femicides registered, marking the deadliest month to date. The horrific murder of 25-year-old former beauty queen Ingrid Escamilla in February ignited outrage from citizens due to the absolutely heinous manner in which she was murdered.  Her domestic partner, who was arrested shortly after the body was found, stabbed, skinned and disemboweled her. Local tabloids’ exploitation of the grizzly images exacerbated the outrage many in the country felt. One tabloid even went so far as to use them as their cover story, with the headline, “It was Cupid’s fault.” The extent of the violence and the way the photos of Ingrid’s body were exploited allude to the societal devaluation of a woman’s life.

The murder of Ingrid Escamilla may have stood out because of the level of brutality, however unfortunately, it is one case among a growing many: over the last five years the percentage of femicides has increased by a staggering 137 percent according to Mexicos’s Attorney General Alejandro Gertz Manero. Additionally, femicides are particularly violent as women are more likely than men to be killed by strangulation, drowning, suffocation and stabbing. This rampant violence coupled with the glaring impunity with which these crimes are committed has led a stunning 77 percent of Mexican women to report not feeling safe. The prevalence of femicide in Mexico points to both cultural and systemic factors contributing to the violent gender dynamic. The fact remains that the women of Mexico have been, and continue to be, let down by the people and institutions should have been there to prevent them from becoming victims of a pandemic of femicides that ravaged the country long before the words “social distancing” became part of the zeitgeist.

While the international community lauds president Andrés Manuel López Obrador as a socially progressive politician, he has done little to address or even acknowledge the prevalence of femicide in the country. Instead he often chooses to downplay the extent of the violence, and when thousands of women took to the streets in protest of the ongoing femicide he merely responded by saying, “I’m a humanist, not a feminist.” In a response that was akin to something US president Donald Trump would say, when asked about the rise in domestic abuse calls during the COVID-19 pandemic, López Obrador stated, “Ninety percent of those calls that you’re referring to are fake.” Obrador’s egregious dismissal of  the murder of his fellow countrywomen without a doubt emboldens perpetrators as these messages demonstrate a complete absence of accountability. It then comes as no surprise that members of “El Bloque Negro” took matters into their own hands when taking over the National Human Rights Commission building.

The president’s rhetoric on the issue of femicide only exacerbates the already existing issue of systemic impunity that compounds the rates of violence towards women. In fact, 93 percent of all crimes in Mexico were either not reported or not investigated in 2018, a trend reflected in the handling of femicide cases. The current situation in Mexico is especially disappointing due to the promises Obrador made during his campaign: his administration has even released a plan to combat gender-based violence, yet since he took office substantive legislation has been nearly non-existent. One of the protestors currently occupying the NHRC building, mother to a daughter whose murder was never investigated by the state, declared, “We’re here so that the whole world will know that in Mexico they kill women and nobody does anything about it.” Despite the current administration’s shortcomings in finding a solution to the issue of gender-based violence, these protests could spark the initiative to create policies that seek to protect all of Mexico’s citizens.

One of the contributing catalysts to the issue of femicide in Mexico is undoubtedly the culture of “machismo,” a manifestation of “toxic masculinity” that centers around the notion that men are superior to women. Some historians believe that this warped ideology stems from societal maladies originating from European colonization. Historians reference path dependency theory, a school of thought that centers around the heightened importance of historical decisions made by nation-states. According to path dependency theory, Mexico’s decision to base its fledgling legal system on the French Civil Code was a catalyst for the disproportionate distribution of civil liberties in the country today. The French Civil Code explicitly espoused the hierarchical relationships between genders in society, as women were listed as dependents of men in all aspects of their lives, from finance to law. As Mexico created a society within which women were seen as better suited for domestic work and men the head of the household, this legal foundation subsequently gave birth to cultural machismo.

The culture of machismo conflates masculinity with aggression, violence and force, making it the quintessential fertilizer for femicide to grow. This ideology propels men to a dominant role in society, often creating a sense of entitlement and a lack of accountability for the damage they inflict on the lives of women. The societal disenfranchisement of women hinders upward mobility and financial independence due to limited opportunities, and thus perpetuates a state of vulnerability within their families and communities as a whole. Some men have taken it upon themselves to seek help in order to “deconstruct” their identity as men in the vein of machismo. This deconstruction is a welcome gesture but far from the solution necessary to reconcile the fact that on average 11 women are murdered daily, and only a fraction of these murderers are ever brought to justice.

“The issue of women’s oppression is considered a secondary, subordinate problem that will be resolved after social change. [Our] movement arose… from the disenchantment, the dissatisfaction, the frustration that we, as women, experience in the isolation of everyday life, [from this] emerges the need to unite with other women, at first perhaps as pure instinct.”

– an excerpt from La Revuelta, the first female-run feminist newspaper in Mexico

A Woman’s Right to Life

When asked if she had noticed that she was playing a part in starting a revolution one of the feminist occupying the NHRC building, Yessinia, simply responded by saying, “No, I’m completing it.” Her response alludes to the misconception that societal progress is a mantle that needs to be taken up and begun anew with every generation, that there needs to be a finish line to the race for gender equity. The alarming rates at which perpetrators murder women with impunity in Mexico should not just create an uproar domestically, but also prompt recognition that the systematic constructs that oppress Mexican women also oppress women globally. For instance, even in countries that are experiencing a decline in homicide rates, the percentage of femicides continues to rise. Also, here in the United States we are seeing a systematic assault on women’s reproductive rights, an issue stemming from religious ideology that typically restricts a woman’s autonomy. So, while femicide may be an issue more prevalent in Mexico, the institutions that facilitate these atrocious crimes exist worldwide.