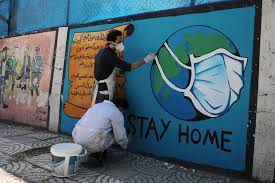 Lockdown within a Lockdown: COVID-19 in the Gaza Strip

On August 25, the Gaza Strip went into lockdown after a family of four that had recently returned from the West Bank tested positive for COVID-19, the first case of the virus in this densely populated territory outside of isolation centers. Since then 2,613 cases have been reported, although a shortage of testing kits means there could be more. While COVID-19 has put strains on countries around the world, the pandemic outbreak is felt especially hard in Gaza, where 53 percent of the population lives in poverty and healthcare infrastructure barely holds up under normal circumstances.

Residents of the Gaza Strip are no strangers to lockdowns. In 2007, after the anti-Israeli militant nationalist organization Hamas took control of the government, Israel imposed a blockade on the Gaza Strip in the name of preserving national security. Though certain restrictions have been relaxed over the years, the blockade remains largely in place to this day. Residents are extremely limited in their ability to leave the territory, always requiring an exit permit from the Israeli Government, and the flow of goods into the Gaza Strip is restricted by what Israel chooses to import.

The Israel-imposed blockade has had significant impact on Gaza’s ability to deal with the virus and continues to hurt residents as they adjust to life in a second lock-down caused by the virus.

The blockade is highly controversial. Israel claims it is necessary to ensure national security and protect Israeli citizens. Hamas, the political party that has controlled Gaza since 2007, has explicitly called for the destruction of Israel in the past and regularly attempts to bomb the Israeli cities that neighbor Gaza. The main purpose of the blockade is to keep terrorists out of Israel and prevent any weapons or materials that could become weapons from entering Gaza. Even with the blockade, Hamas manages to send bombs to nearby Israeli cities and three small wars have broken out between Hamas forces and Israel in the past 13 years.

While Israel maintains that the blockade is necessary, human rights organizations frequently declare that it is a serious violation of multiple international human rights laws. Gaza has been described as “the world’s largest open-air prison” and residents, the vast majority of whom are not affiliated with Hamas, suffer from collective punishments, such as limited electricity (most days residents are lucky to get twelve hours of electricity, though many days pass with only four). Opportunities in life are limited and young people face unemployment rates of 70 percent with no possibility of seeking work in Israel or another country. When Hamas and Israel clash, the victims are predominantly civilians in Gaza.

The blockade has also created deteriorating living conditions, with the UN predicting back in 2012 that Gaza would be unlivable by 2020 unless serious investments in infrastructure were made. In the past eight years, very little has changed, and the consequences on health care and public health reveal conditions that are barely livable — and extremely susceptible to a widespread pandemic.

The Blockade’s Impact on Health Care and Public Health

This blockade has had significant repercussions on Gaza’s healthcare system. Since Gaza is in many ways cut off from the outside world, doctors and other medical professionals are unable to receive the same quality of training as those in other countries. The difficulty of obtaining medical equipment from the outside, due to Israel’s ban on anything that could be used as or turned into a weapon, has rendered hospitals under-supplied. Various reports claim that Gaza has only around 70 ventilators, a much needed piece of equipment for treating severe cases of COVID-19, for a population of two million. Medicine is also difficult to obtain. The opportunity to seek outside medical care at better equipped facilities is very limited due to the restrictions on movement in and out of Gaza.

Beyond the impact on healthcare infrastructure, the blockade raises other public health concerns. Only 4 percent of water in Gaza is safe to drink, and that percentage decreases annually. The building materials needed to improve water sanitation are impossible to collect since Israel has refused to send or delayed sending most of the supplies. The Solid Waste Management in Gaza relies primarily on donkey carts to collect garbage and has no place to put the collected garbage except overloaded landfills. The collection of garbage from two million inhabitants over the years has polluted both the air and what little drinkable water Gaza has. It also attracts wild animals, such as stray dogs and rats, which sometimes carry diseases. Nearly a third of houses lack a sewage system to collect waste. With deplorable sanitation, precious little clean water and polluted air, Gaza is a nightmare for public health officials and a breeding ground for disease.

Some countries, notably Qatar, send financial aid monthly to Gaza. Likewise, the UN is heavily involved in delivering aid to those living in refugee camps within Gaza, but these outside efforts cannot fulfill all of Gaza’s needs. Intense reform and building is needed and that will come only when Israel decides to lift the blockade and intervene in the rapid deterioration of Gaza.

The spread of the virus has slightly improved relations between Israel and Gaza. Prior to August, when the virus spread into the main population of Gaza, tensions between Hamas and Israel were on the rise. Hamas had launched incendiary balloon attacks on Israel that caused 24 fires, and Israel retaliated with air strikes. A cease-fire was quickly called by both groups as they turned to tackling the spread of COVID-19, which has given both sides greater peace. As part of the ceasefire deal, Israel has promised to send aid to combat the virus, although it has not been reported how much aid and what form it will take.

Zion Hagay, of the Israeli Medical Association, has written that since the initial stages of the worldwide pandemic, Israel has been transferring medical equipment into the West Bank and Gaza. Media coverage from sources within Israel likewise assert that Israel has sent aid into Gaza, but it is not stated what specific aid has been sent nor how much. Media coverage from non-Israeli sources are relatively silent on Israel’s intervention in the spreading pandemic. Beyond the ceasefire deal, it is unclear what exactly Israel has done to assist Gaza in this dangerous time and the crisis does not seem to have awakened a commitment to correcting challenges imposed by the blockade.

Gaza continues to stress prevention. All schools and mosques and most stores have been shut down. Those who have been exposed to the virus are required to quarantine for three weeks, although contact tracing is extremely difficult given inadequacies in healthcare and government administration. Social distancing also proves challenging. Since the lockdown began 13 years ago, Gaza’s population has grown by nearly half a million, but the land area has not increased at all, making Gaza about as densely populated as Boston or Tel Aviv.

Doctors, nurses and other healthcare workers are struggling. There has always been a shortage of medical workers, and now COVID-19 has infected and decommissioned at least 68 at a time when more staff is needed. Doctors are working 24-hour shifts. One lab technician, who conducts testing, reported falling asleep on the job out of exhaustion. This is not sustainable long-term, especially if more health workers catch COVID-19 from exposure to patients. Gaza needs more doctors, nurses and technicians as cases continue to rise.

Those with other medical conditions are being impacted as well. Residents suffering from long-term illnesses, such as cancer, often obtain permits to seek health care in Israeli hospitals. Since the beginning of the pandemic, however, Israel has been much more stringent in approving travel and only half of those seeking outside medical care have had their request granted.

Teachers are concerned about education. Schools have moved online but electricity is unpredictable in Gaza, and teachers worry that frequent power outages will impact students’ ability to complete assignments, attend class and stay engaged. In families with multiple children, students fight for sufficient screen time to complete their assignments while the electricity lasts. Israel controls the power lines that give Gaza electricity, and it is almost entirely up to Israel how much electricity Gaza receives. If ever there was a time to lift restrictions on electricity, it is now. Beyond electricity, poverty hinders education as many families cannot afford computers or smartphones. Until schools reopen, students from these poorer families have no way to connect with teachers or submit online assignments.

Some residents cannot believe that their situation could have possibly deteriorated. A family that appeared on NBC lamented that if COVID-19 doesn’t kill them, hunger will, since the lockdown has cost the father of the family his job as a driver. Many parents are struggling to provide food for their children as unemployment skyrockets and small businesses fail. Beyond medical supplies, Gaza needs general forms of aid such as food to offset widespread poverty.

The emphasis on self-isolation and social distancing is hurting people mentally in a community where all they have is each other. The lock down imposed by Israel has become almost normalized over the past 13 years, especially for Gaza’s residents under 24, who make up 70 percent of the population, but this new lockdown due to the virus has been a wake-up call to just how dismal and unsustainable the situation is in Gaza.

Israel has great incentive to deliver immediate, generous aid and lift restrictions caused by the blockade since the poor conditions in Gaza, exasperated and highlighted by the outbreak of COVID-19, could prompt Gaza’s young population to retaliate on an unprecedented scale.

For nearly 18 months between 2018-2019, Gazans would gather every Friday along the Gaza-Israeli border in protest of horrible living conditions. The protests eventually petered out after little success but created a culture of protest in Gaza that could be renewed on a greater scale if conditions continue to worsen as COVID-19 spreads. Gidon Bromberg, the Israel director for EcoPeace Middle East, warns, “If COVID gets out of control, you are going to see reactions in Gaza that could be horrific; you could see hundreds of thousands of Gazans trying to walk to the fence out of fear of staying in Gaza”.

Thanks to extensive prevention measures taken in the early stages of the global COVID-19 pandemic, the crisis is still in its beginnings in Gaza. But if cases continue to rise, it could cripple the already fragile area. Israel needs to act immediately and re-evaluate if the consequences of its thirteen year blockade against Gaza and its two million residents are worth increased security. There must also be increased awareness of the conditions in Gaza on a global scale. Two million people are trapped in dire circumstances with no way out due to Israel’s blockade.