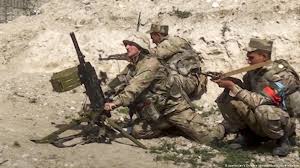 Conflict Rages between Armenia and Azerbaijan

However, this seizure led to a serious military conflict. During the 1990s, a bloody war for control of the region resulted in the deaths of 30,000 people and displaced millions more. There were accusations of attacks on civilians from both sides, but Azerbaijan suffered a higher death toll and number of displaced refugees. It also lost a significant amount of territory to Armenia, estimated to make up 9 percent of Azerbaijan total territory after Armenian forces seized Nagorno-Karabakh and surrounding areas at the end of the war in 1994.

In the present, the region has been known as the Republic of Artsakh since in 1991. The region itself is 2,734 miles, but it lies in close proximity to oil and gas pipelines that supply Azerbaijan with a significant amount of wealth. Despite a truce signed by both parties in 1994, there have been small skirmishes that resulted in the hundreds of troops’ death for both nations. However, the conflict that began in September is considered the worst period of fighting since 2016. As almost 500 people have been killed since the attacks began, predictions of actual war have caused both Russia and Turkey to become involved in the conflict. The interference by these two states have problematic motivations that could exacerbate the conflict further by flaming ethnic and historical tensions.

The start to the restart of the conflict is unclear, and both sides are blaming each other for acts of aggression which triggered the conflict. According to Al Jazeera, Azerbaijan’s defense cabinet claimed it had begun a “counteroffensive to suppress Armenia’s combat activity and ensure the safety of the population.” Meanwhile, Armenia has accused Azerbaijan’s military of attacking civilians, which provoked the start of the conflict. There has yet to emerge a dominant or decisive determination as to which version of events is true.

There is also no one explanation as to what triggered the severity in the new round of conflict. Robert M. Cutler, a fellow at the Canadian Global Affairs Institute, offered the idea that “Nikol Pashinyan, the Armenian prime minister, is increasingly nationalistic and has said he does not recognize the proposed peace settlements known as the Madrid Principles, angering Azerbaijan” in his column for Al Jazeera. This could have caused the explosion of violence, but it also could have been due to a breakdown in diplomatic ties or merely the seizure of an opportunity to take more land by either party.

One of the notable changes that has occurred since the 1990s is the improvement of weaponry and the increase in Azerbaijan resources. The region is oil-rich, and that wealth has been used to expand its military equipment in addition to leveling the playing field between Armenia and Azerbaijan. During the initial conflict, Azerbaijan simply did not have the military strength to seize Nagorno-Karabakh. However, the rise in oil prices and increased defense spending has allowed Azerbaijan to improve its military position against Armenia. Because it lost so much territory during the first war over Nagorno-Karabakh, Azerbaijan has vowed to reclaim the region, and it has launched unsuccessful offensives to recapture the state. It has also accused Armenia of trying to seize control of its rich oil and gas pipelines, a claim that Armenia has denied.

The improvement in technology and the reliance on drones by both parties has dramatically increased the number of civilian casualties as well as large-scale destruction of residential areas and infrastructure. In addition, there is concern about the involvement of neighboring states, such as Russia and Turkey. Turkey has close ties with Azerbaijan, largely because the nation is composed of ethnic Turks. This is in addition to the fact that Turkey instituted a genocide against Armenia during the 1920s, a fact it has still refused to admit or take any responsibility for. Russia is slightly more neutral, as it has good relations with both nations, but it is technically allied with Armenia. Turkish president Recep Tayyip has supported Azerbaijan with defense technology, drones and propaganda machinery while dismissing international calls for a ceasefire. Russia has meditated two failed truces that would have resulted in prisoner swaps and a ceasefire. The two truces collapsed after both sides accused the other of violating the ceasefire. Currently, there is dispute about who has control of Shusha, the second largest city in Nagorno-Karabakh, as both nations have claimed seizure. Azerbaijan has vowed to “go to the end” if the agreement by Armenian forces to withdraw from Nagorno-Karabakh and seven surrounding regions collapses.

The primary issue with the involvement of Russia and Turkey is the inherent desire to increase military control abroad on the part of both nations. Russia and Turkey have invested militarily in the war in Syria, while Turkey has military outposts in Libya and the Mediterrean. Russia has seized territories belonging to the Ukraine, flexing its military at the borders of Moldova, Finland and the Ukraine in the hopes of inflaming separatist movements. Therefore, its involvement in Nagorno-Karabakh reads as an attempt to become a dominant regional military power with footholds across the Middle East. According to Garo Paylan, a member of Turkish Parliament, “Turkey’s involvement in regional conflicts has whipped up nationalist fervor, obliterated space for advocates of peace and democracy and deepened a sense of fear and precarity among the minority populations.” In order to achieve military significance in this conflict, there are reports that Turkish-backed militias in Syria recruited Syrians mercenaries to fight on behalf of Azerbaijan against Armenia. For both Russia and Turkey, their involvement in the conflict paves a way for their involvement in the peace talks, an advantageous position for both nations.

This conflict has deep roots in a historical division of territory which has resulted in multiple nations claiming succession in recent years across Eastern Europe and in the Caucasian region. The issue with this particular conflict is the increase in military technology, the deaths of civilians and the potential for protracted proxy war between Armenia and Turkey or Turkey and Russia. Given the current state of global instability, and the danger of a war raging during a pandemic, there has to be a level of recognition on the part of the global community as to how to direct neutral peace talks without allowing nations with an agenda to dictate the terms.