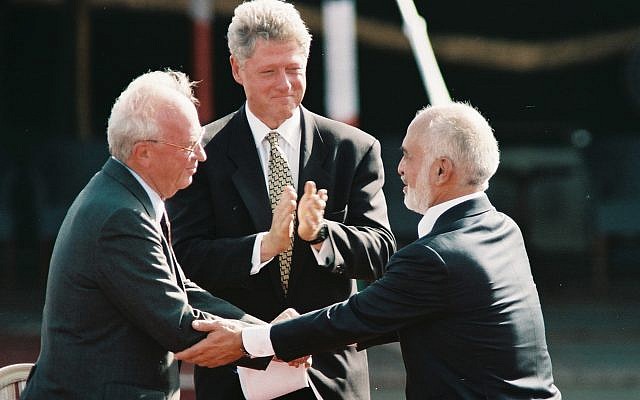 By Shenali Pilapitiya on December 3, 2020

The 1994 Israeli-Jordan Peace Treaty ushered in an unprecedented era of diplomatic relations, brokering peace between an Arab nation and Israel in ways previously unimaginable. This peace process has enjoyed longevity into the present day; yet this historical peace was not without unease and will certainly crack under pressure if the United States and Israel pursue annexation plans under the “Peace to Prosperity” proposal.

A History of Clandestine Relations:

The 1921 British division of Mandate Palestine designated the territory west of the River Jordan as ‘Palestine’ while territories east constituted ‘The Hashemite Emirate of Transjordan’. To rule this new kingdom, the British appointed King Abdullah as the leader of modern Jordan. Yet Britain’s division of land was not passively accepted — rather, Abdullah’s hegemonic ambitions sustained a desire to rule over Greater Syria and consolidate Western Palestine into Jordanian territory.

A history of bilateral relations between Jordan and Israel is exemplified through Jordanian self-interests — particularly, that of territorial acquisition. In the 1930s, for example, King Abdullah solidified a political relationship with the Jewish Agency Executive in Palestine through land-sale options so as to fulfill ambitions of territorial expansion. Jordan long pursued an alliance with Zionists over common interest in securing Palestinian-Arab territory; likewise, for Zionists, Abdullah promised legitimacy as a non-Palestinian leader of the Arab world that could actively support a Jewish State.

Much of Jordan’s cooperation with the state of Israel remained clandestine, as Jordan formally adopted a pan-Arab stance post-1948. Hence, a classic tension between pan-Arab unity and national interest ensues: Jordan must conceal its relations with Israel in order to protect its alliance with the Arab world yet must pursue relations with Israel for its own self-interests in territory and trade.

Clandestine relations endure into the modern day, as support of bilateral relations with Israel remains limited to political elites. With a lack of tangible payoffs for peace with Israel, Jordanian civilians do not share the same enthusiasm for peace as their elite political counterparts. And, despite prevailing peace since the official Israeli-Jordanian Peace Treaty of 1994, peaceful relations are precarious in a region where a Jordanian alliance with Israel is compromising with the ‘enemy’.

The historic 1994 Peace Treaty promised various key principles: a distinct recognition of borders, the role of Jordan in Muslim Holy shrines in Jerusalem, an agreement upon water relations, and a unilateral commitment to the settlement of Palestinian refugees.

The success of the treaty can be attributed to its timing, and the emergence of the US as a stalwart external power that could contribute real weight to international agreements. By 1994, any international agreement sanctioned by the United States was guaranteed support of money, arms, diplomatic and trade relations with the emergent superpower after the Cold War. Moreover, the end of the Cold War oversaw the collapse of the Soviet Union, which had formerly been the primary sponsor of Arab states. Peace with Israel, therefore, became a bargaining chip for Jordan’s security and economic future via a partnership with the United States.

There remains a disconnect between Jordan’s elite political bargaining and the sentiments of Jordanian civilians regarding Israeli-Jordanian peace. Although Jordan’s leaders have historically pursued peace with Israel, civilians have long been skeptical of this process.

First, the monarchy and political elite struggle to convince Jordanian civilians that peace is the optimal (and only) way forward. Palestinians comprise more than 50 percent of the Jordanian population following their displacement from their homes, and the psychological trauma of Israeli occupation lingers on. Additionally, there is widespread dissatisfaction with Israel’s imposition of a huge West Bank Palestinian population upon Jordan, which is accompanied with little to no financial recourse. Jordan, as a lower economically developed agricultural country, struggles to navigate its porous borders, refugee crisis and general economic well-being against a backdrop of Israeli hegemony.

At a local level, widespread dissent is expressed towards Israel as an occupying power. Jordan encourages a relatively free media climate, and the government tolerates widespread anti-Israeli discourse in the media — possibly as a counterbalance to general public knowledge of the government’s extensive cooperation with Israel and possibly so as to not deny what Jordanian civilians already know too well, having experienced firsthand the repercussions of Israel’s brutal occupation. The average Jordanian renders Israel as a settler-colonial state and thus, the enemy.

In short, peace is not trusted. The majority of civilians believe that Israel wants to monopolize power over the Arab states — all while continuing its occupation of Palestine, retaining its territorial buffers and exercising military superiority in the region. And, in recent times, it is proving more and more difficult for the Jordanian government, in its commitment to peace, to disprove Israel’s insidious actions.

Despite the recent presidential election victory for the Biden-Harris administration, the future of Israel-Jordan peace and the relative peace in the region remains unclear. The Democrat party has experienced fractures in its pro-Israel consensus, with left-leaning progressives calling for an end to the United States’ unbreakable support for Israel. Nonetheless, on matters pertaining to Israel, Vice President-elect Kamala Harris emphasizes a hawkish, unwaveringly pro-Israel stance, undermining expectations for a reversal of the “Peace to Prosperity” plan proposed earlier this year.

Trump’s “Peace to Prosperity” plan, proposed in January 2020, advances an annexation of Palestinian lands in an attempt to expand the state of Israel. This follows the relocation of the US embassy to Jerusalem, changing the US’s historic stance on Jerusalem as an international territory. Such recognition of Jerusalem directly undermines the terms of the 1994 treaty, which gave special recognition to the role of Jordan in Muslim Holy shrines in Jerusalem. Moreover, the plan’s expansion of Israeli presence in the West Bank seems to dangerously enclose upon agreed boundaries in the treaty and more than likely signal provocation to surrounding Arab states. Contrary to its title, the Trump administration plan appears nothing short of an attempt to infiltrate Palestinian communities and threaten the stability of the entire region.

Continued expansion of Israeli settlements will undo a historical peace process with its neighbor, Jordan. Likewise, the US’s role in encouraging Israeli occupation will not only undo the peace process it helped to broker but will overturn all diplomatic progress in the region. Though the “Peace to Prosperity” will likely undergo a reimagining, it will be crucial to interrogate future propositions of the Biden-Harris administration and scrutinize whether or not an expanded Israeli presence will be a part of its plan. Based on recent remarks by Kamala Harris declaring an fervent support of Israeli interests, such a proposition would be unsurprising.

Jordan already faces dissent amongst its civil population in relation to its peace processes with Israel. As a population comprising 50 percent Palestinians, Jordan itself is a vestige of Israeli occupation and the 1967 War. Should violation of the peace treaty occur through encroachment on Palestinian land, a pandora’s box of of preexisting civil tensions will unravel.

Jordan has been clear that while its commitment is towards peace, it will also not renounce its Arab partners or self-interest. If peace is to prevail, the US and Israel must show integrity towards agreed terms and actively contribute to the peace process by upholding their end of the bargain.

Using peace as a guise for hegemonic aspirations is the game of diplomatic relations. Yet the US and Israel should recognize that a new era of regional instability will surely not be a game.