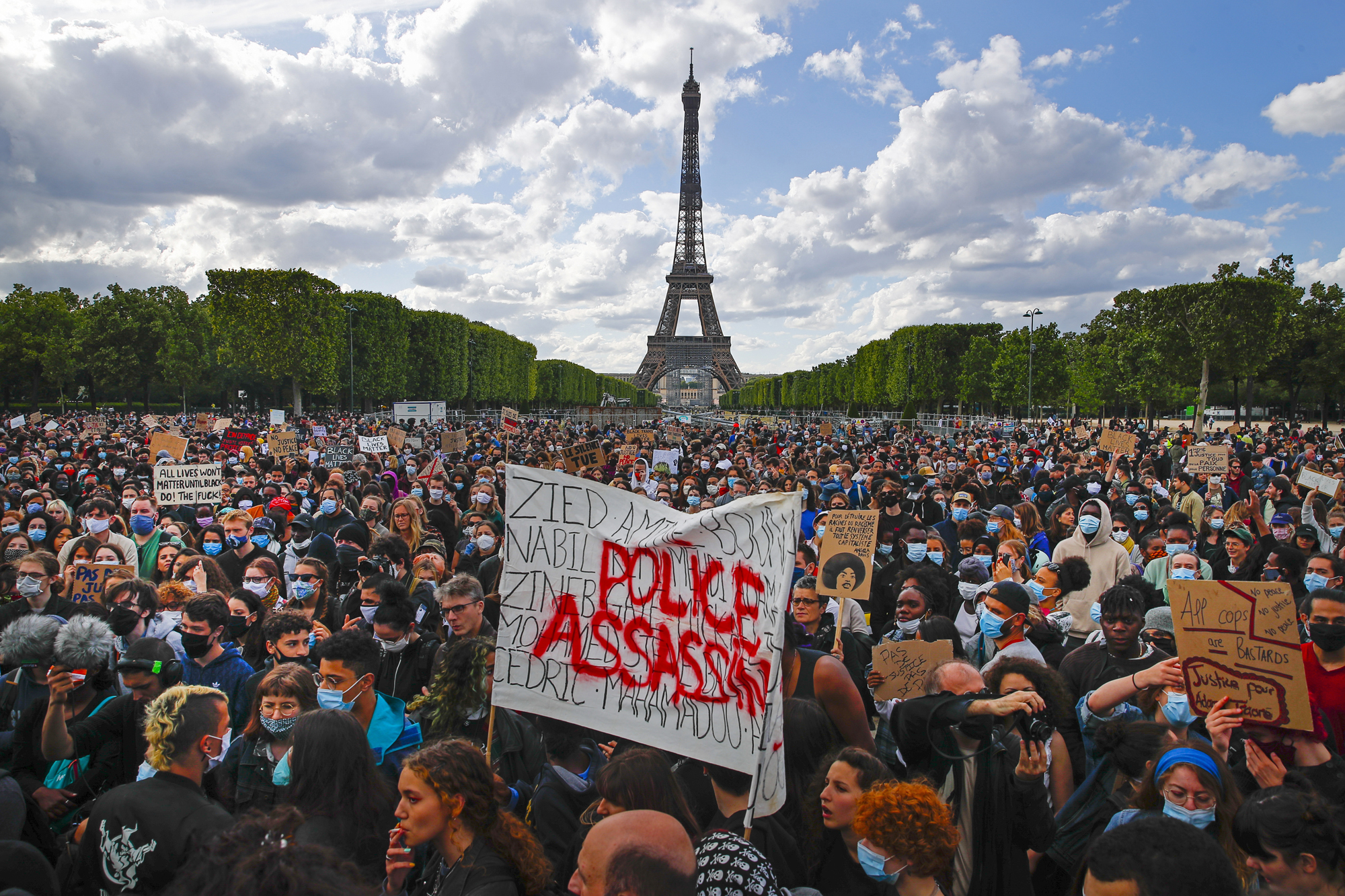 As Assa Traoré, a French anti-racism activist of Malian descent, followed the murder of George Floyd in late May 2020 and the subsequent Black Lives Matter protests that erupted across the United States, she saw in it the opportunity to seek justice for her brother and awaken a colorblind France to the discrimination within it.

4 years ago, in 2016, Assa’s brother Adama was killed in police custody on his 24th birthday by an excess of force. Deeply shaken by his death, Assa quit her job as a school teacher and became a full-time anti-racism activist, fighting in particular for France to acknowledge the injustice against her brother. But an internal police investigation exonerated the police officers who arrested Adama and the government remained silent, acting, from Assa’s perspective, as if Adama never existed.

The anger over the murder of George Floyd, however, gave Assa the chance to bring attention to Adama again and challenge the pervading attitude towards race in France. She quickly organized a demonstration at France’s main courthouse in Paris, despite restrictions on large gatherings during the COVID-19 pandemic, and brought together between 20,000 and 80,000 people. Assa wore a t-shirt that read “Justice Pour Adama” [Justice for Adama], and many participants took the occasion to remember not just the injustice against George Floyd but against Adama and dozens of other POC in France.

Throughout June hundreds of thousands of demonstrators across France showed their support for anti-racism efforts and brought national attention to the race problems in France, particularly racial profiling and abuse by police forces.

The Universalist Approach to Race

This widespread attention towards race issues within France is a major victory for anti-racist activists, since modern France’s unique approach to dealing with race makes it nearly impossible to discuss concerns of racism and discrimination.

The idea is that racism stems from giving validity to race, a social construct with no biological evidence, and that by rejecting the existence of various races, everyone will be viewed and treated equally.

People are not designated as French-Moroccan or French-Algerian or French-American, but simply as French. Any acknowledgement of one’s race or ethnic origin is deemed as inappropriately questioning their Frenchness. Even classifying someone by race or an ethnic identity is grounds for a lawsuit.

The nation believes that identifying every French citizen as first and foremost French will eliminate the division and antagonism that emerges from identity politics as people classify themselves as belonging to different groups. But refusal to acknowledge the existence of different races and religions within France has not suddenly ended systemic discrimination. Rather, it has created the illusion of a post-racial society and destroyed the possibility to productively talk about race, diversity and multiculturalism.

France asserts that racism is a personal choice and attitude that exists within individuals, not societies or organizations. But the experiences of French Black and Arab citizens show how racism still pervades in French society.

Racism in a Postracial Society

Similar to Americans, Black and Arab citizens in France report unfair treatment by police. A study conducted in 2009 that followed police at major transit stations throughout the country showed that young Black and Arab men are 20 times more likely to be stopped by police for identity checks. Nothing has been done since the study was published to ensure randomness in identity checks. Statistics gathered by an NGO, not the French government, shows that 60 percent of prison inmates are Muslim, although Muslims make up only 10 percent of the population. COVID-19 also revealed deep-seated racial profiling among police. After COVID-19 broke out in France, police were ordered to enforce a lockdown policy that permitted citizens to leave their house only once a day. People in majority non-white neighborhoods reported much higher rates of police surveillance, proved by media coverage of the situation, and were stopped at much higher rates.

But racism extends beyond police relations. In France, success and advancement in government and business is largely tied to attendance at one of France’s elite universities. Admission to these universities is based on passing an intense admissions exam, which requires years of study through an expensive test prep course. The vast majority of non-white families, in addition to low-income and middle class white families, are unable to put their children through these test prep courses, severely limiting their chances of passing the entrance exam. The result is that less than 1 percent of CEOs in France are non-white and it is rare to find a non-white person in a high-ranking government position.

Arab and Black citizens also claim to experience other forms of discrimination in regular life, such as occasionally being refused service at restaurants and having greater difficulty in securing housing and employment. Certain French laws target minorities in the name of promoting universalism and communalism. For example, Muslim girls and women in public schools and public servants at workplaces are forbidden from wearing hijabs with the reasoning that it separates them from their classmates and colleagues in a society where everyone is meant to be united and equal.

From these few facts, it is clear France is far from the post-racial society it claims to be. But the deliberate removal of race from political discourse makes it impossible to address these issues. The French government is quick to shut down any allegations of systemic racism by claiming race does not exist in French society. Affirmative action is scoffed at. The lack of official statistics means the government is unable to observe trends in income levels, unemployment rates, access to education and workplace diversity across various ethnic groups and religions in order to draw conclusions about discrimination or access to opportunities. Pretending that all citizens are already equal removes the responsibility to implement reform and programs that will enable minorities to enjoy the same opportunities afforded white French citizens.

It further means that France refuses to acknowledge race as a factor in cases of police brutality. Those who allege racism in cases of police brutality, such as the case of Adama, are accused of racializing non-racial issues. What happened to Adama had nothing to do with his African ethnicity but rather the circumstances of the arrest, the government claims. But the summer of 2020 has been a powerful tool for anti-racist activists to awaken French citizens and the French governments to the failings in its colorblind world. The memory of Adama has been particularly crucial because it shows the French people that police brutality is not an American issue an ocean away, but something happening right at home.

The widespread protests have made it impossible for the government to completely ignore the demands of its citizens, although the response has been mild. President Emmanuel Macron urged the Interior Minister, Gerald Darmanin, to begin work on police reforms. Darmanin released a list of suggested reforms, including a ban on the use of chokeholds and temporary suspension for officers accused and found guilty of racist comments. This received great pushback from the police union, with officers marching in protest through the streets of Paris. To restore order, the ban on chokeholds was put off until September 1st, and it remains to be seen how far police reforms will actually be carried out.

President Macron has announced a continuation of the investigation into the circumstances of Adama’s death (an autopsy ordered by the police reported heart failure as the cause of death, while an independent autopsy ordered by his family reported asphyxiation, leading to debate over the involvement of police in his death). The Justice Minister also invited the Traore family to visit her office, but Assa declined, urging the minister to instead work on prosecuting the officers who arrested Adama.

Though most politicians are desperate to cling to the status quo, a few have spoken in favor of the protesters, including a former government spokesperson, Sibeth Ndiaye, who wrote an op-ed for the French newspaper Le Monde in which she called for France to begin collecting statistics on race and religion.

Despite citizens of various races, religions and ethnicities taking to the streets throughout France in protest and recognition of racism in France and abroad, France’s leaders have been extremely reluctant to shed the idea of universality and postracialism.

A few days after the protest organized by Assa, a spokeswoman for President Macron issued a statement that France is not a racist country and cannot be compared to the United States. Other politicians stuck to the old rhetoric that discussing race is racist, since it gives validation to a dangerous social construct. Even as President Macron agreed to support the investigation into Adama Troure’s case, he called the demonstrators led by Assa “separatists” and “communatarists”, terms used to describe those who wish to overthrow the French republican model.

Ultimately, France’s pride and commitment to what it considers the universalist ideals of the French Revolution may prevent serious change for a long time.

The significance of the protests in summer 2020 was not the immediate actions on the part of the government. Rather, it was the awareness of racial struggles within French society, something people have comfortably ignored and denied for decades. Thousands of French citizens took an active part in protesting police violence not just in America but in France and acknowledged the difficulties faced by nonwhite citizens. Newspapers and magazines in France and around the world have been quick to publish articles exposing the dangers of colorblindness.

Politicians, however reluctantly, were also forced to confront the reality of unrest and dissatisfaction with the way France handles matters of race and diversity. The coming months will show if the movement can maintain its momentum and convince those in charge of the need for real change in French society.