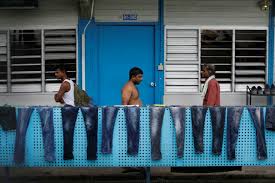 “Given Singapore’s land constraints, dormitories are a practical way to housing our migrant workers. This is unlikely to change. What will need to change however are the specifications as well as the management of the dormitories including the daily living habits of the dormitory residents……” said Josephine Teo, Singapore’s Minister for Manpower during a session in Parliament back in June.

Teo explained how important it is to “instill discipline” among migrant worker dormitories in Singapore and how the country could go on “benefiting from the contributions” of migrant workers.

To dispel further skepticism on the context, migrant workers in Singapore refer to foreign workers, commonly from South East Asia and South Asia, hired by more informal sectors. They often work under hazardous jobs for poor pay, which at times can range between as little as SGD (Singapore dollars), 300-400 (291 USD) per month and not more than SGD 500-800 a month, as compared to the minimum wage of $1200 for an average local worker under Singapore’s progressive wage model.

As shocking as this statement may seem, not merely because of its multiple fallacies, it is rather unsurprising, especially coming from a politician like Teo whose attitude towards migrant workers could be construed as cavalier at best. The harsh treatment of migrant workers became more glaringly obvious due to the pandemic. Since the beginning of the pandemic, the lack of acknowledgment and accountability has been a sore point for many.

This pandemic revealed stark inequalities, even in a society that we perceive as utopian of sorts globally with its so called ‘clean city-state’ image. When Singapore went into a nationwide lockdown or “circuit breaker,’’ there was much speculation on how this would impact its July general elections. The escalation in coronavirus cases between March and April had come as a shock, particularly among the migrant worker community. Despite the initial positive reception of its handling of the crisis, Singapore reports over 57,000 COVID-19 cases as of September. Nearly 95 percent of these cases have come from these dormitories. September marks the 5-month near-lockdown situation among migrant worker dormitories, most of whom have lost their jobs and are struggling to find their way. This is a stark contrast to the bustling city, which has now completed three months of its Phase 2 reopening.

Migrant workers have to deal with the double-layered stigma of being foreigners and constantly branded for their work. They are seen as simply cogs in the machine of Singapore’s economy due to their employment in informal and low-wage sectors. The passivity of both the government and the media has only further led to further ignorance and their lack of assimilation into Singapore’s diverse social fabric. This speaks to the more covert yet equally systematic ways migrant workers continue to be dehumanized and disregarded by the general populace. The issue has been shoved under the rug for long and depoliticized, also in part due to media censorship in the country and the ‘’OB’’ (out of bound) marker concerning many societal issues. Under this label, migrant worker issues fall under societal problems that may not be permissible for public discussion.

Their hardships and experiences during the pandemic aggravated their precarious position in Singapore’s society further. It is a grave insight into the realities facing this marginalized group, especially regarding the management and conditions of workers’ dormitories and some of the more systemic issues at stake. It is only until recently that their plight has sparked a national outcry as the country finally comes to terms with its over-reliance on the migrant community and, most importantly, how their struggles and needs have fallen through the cracks. Singapore’s coronavirus clusters among this community have also been a significant indicator of its attitudes towards this community and the greater need for more social inclusion.

However, the Us Vs Them narrative continues to impede discussing issues facing the migrant worker community in Singapore despite Singapore’s progress when talking about similar issues of this nature. Many have even blamed the cluster of cases on the workers’ ‘’personal hygiene’’ and ‘’living habits’’ without acknowledging the deficient living and working conditions they face and how the lack of social distancing measures due to space constraints in crowded dormitories has been a breeding ground for the virus over the past few months. Such statements only cement this classist and racist thinking and contribute to a climate of fear-mongering, suspicion, and fear, which only tends to escalate during a pandemic.  There have also been entire articles in publications such as Singapore’s local publication, The New Paper, dispelling and debunking some of the rumors about how foreign domestic workers are more likely to spread the virus.

It is no shock that the pandemic has especially impacted the migrant worker population, and the number of cases in the dormitories continued to increase during July and August due to overcrowding and the lack of social distancing measures. Unfortunately, this period saw an escalation in suicide and suicide attempts by migrant workers living in these confined dormitories and isolated spaces. The ventilation in the dormitories is also very poor, and a common bathroom is often shared among a dozen or more people. Human rights groups and health officials have also concluded that the dorms’ conditions, especially when cordoned off, have made it easier for transmissions of the virus to occur more easily.

HOME (Humanitarian Organisation for Migrant Economics), one of the leading nonprofits in Singapore working on migrant-worker issues has provided both financial and social support to both migrant and domestic workers over the years. The organization focuses on fighting exploitation and human rights violations faced by these oppressed groups in society. They reported that some of the most common problems migrant workers have faced over the years include wage theft, work injuries, poor living conditions, and physical, verbal, and psychological abuse. Over the past few months, Singapore’s Ministry of Manpower, National Environment Agency, the Singapore Armed Forces, the Singapore Police Force, the Migrant Workers’ Centre and other NGOs deployed an inter-agency task force. The Ministry of Manpower began holding more inspections in the nearly 1200 dormitories to monitor living conditions and assess the residents’ well-being. HOME and other local NGOs in the country also distributed masks, sanitizers, soap, and other hygiene products.

The Real Evil To Combat

‘’If you need the economy to move, would you release the community people or the dormitory workers? The safety of others overrides the interest of an individual, ‘’ said infectious diseases doctor,  Leong Hoe Nam. Yet, our focus here does not lie in choosing to release the workers back into the community, but most essentially, having discussions on the more systemic issues at stake here, which could potentially influence societal attitudes and, by extension, government policy on these matters over the next few years. However, with testing, damage control, and disaster relief being at the forefront in curbing the outbreak in these migrant worker dormitories, hard-pressing issues such as the mental health and well being of workers as well as more institutionalized and systemic issues are not at the center of the discussion. This even hints at a larger regional problem among southeast Asian companies, especially when it comes to disregarding some of the social issues that have arisen due to labor migration over the years.

When Singapore finally went to the polls back in July, one would have expected greater visibility on the migrant worker issue. Although the ruling People’s Action Party’s (PAP) popular response to the pandemic would make it seem like an opportune time to head to the polls, the election was also a litmus test for several other underlying issues that have been festering since the previous elections in 2015- the migrant worker issue and stigmatization being an essential one. Race has often been a tough debacle to crack in the small but significant island-nation, where social and religious harmony has always hung by a thread.

However, we still witnessed some of this narrow-mindedness and even thinly veiled xenophobic mindsets in the Singapore Progressive Party’s campaign video, which portrayed how migrant workers had taken away blue-collar jobs from local Singaporeans. Even though there was considerable debate among contending parties about foreign worker policies and rights, discussions were often skewed toward speaking about businesses and enterprises’ needs rather than the protection of their rights.

Unfortunately, Singapore’s situation is one that parallels many countries in South-East Asia, with significant foreign and migrant worker populations. The spike in Coronavirus cases among countless migrant worker communities across the region has been a rallying cry for governments to finally confront the cruel realities facing migrant workers during this crucial period. This remains an important humanitarian public health crisis. Our discussions now should be centered around bolstering the support systems for migrant workers. Finally, it is necessary to begin identifying the gaps and recognizing some of the deeply entrenched systemic problems at stake for this community. Further public support and policy across the region should call for more fortifying policy measures that tackle different issues at stake, for instance, violence against migrant workers, problems belying female domestic and migrant workers, domestic abuse, better living and working conditions on systems and institutional levels, among others.

Yet, our efforts do not draw to a halt simply because there is no longer a pandemic forcing us to address a long-brewing storm we have chosen to ignore for years.

Will there finally be an impetus for change?