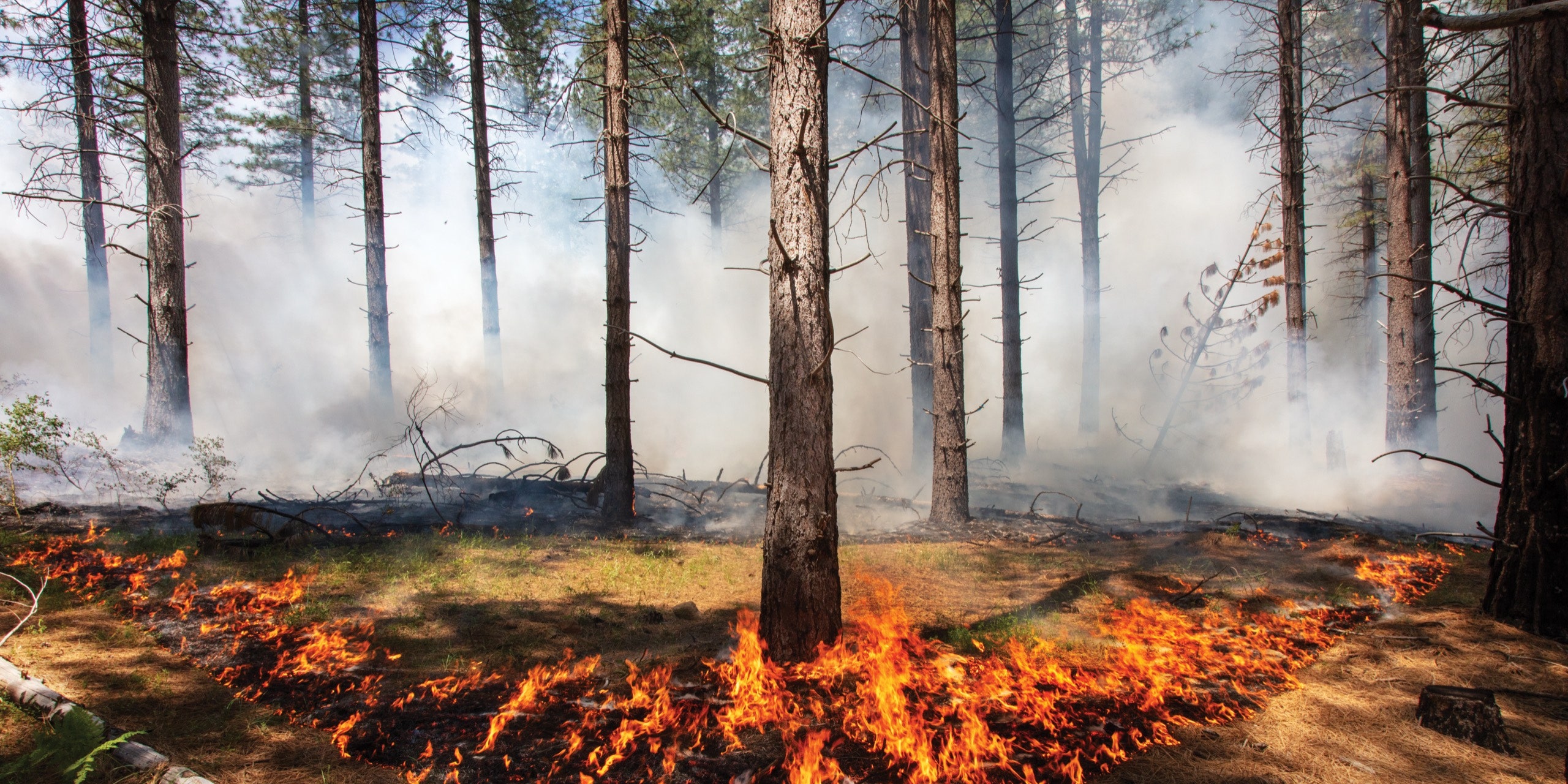 Fires have long been a fixture of California, but over time they have become increasingly intense and disruptful, with “megafires” becoming more and more frequent. While fires are key natural events, these giant conflagrations are not normal. Many people are quick to diagnose them as yet another side effect of a warming climate — and they would be partially correct.  However, government agencies’ decades of poor forest management set the groundwork for these mega blazes by banning the cultural burning practices in California that worked to prevent such massive fires. Now, as these fires stretch firefighting crews and resources to the brink while literally burning through the state’s budget, California seems to be headed over a cliff into fiery oblivion. Preventative solutions are imperative, as fighting these fires after they ignite has become increasingly unsustainable and deadly. Chief among these preventative measures is restoring what once was: the traditional indigenous practice of using small, controlled fires to prevent the huge, disastrous ones. Tribes have been pushing to restore prescribed fires on their lands for the explicit purpose of reducing wildfire risk and restoring value in terms of productivity and biodiversity. These proposed prescribed burns need not be limited to just indigenous land and ought to be applied across the state of California to build resilience against future fires and the threat of climate change.

When fire was a tool

For over 13,000 years, hundreds of native peoples such the Mono, Yurok, Karuk and Miwok cultivated land in the present-day American West using networks of small, controlled blazes. They observed the way that natural fires rejuvenated and reshaped the land, and they were able to harness fire’s power into a productive force. Natives used low-burning fires to clear out the underbrush, making it easier for humans and animals to move through the trees, and inviting new growth where old decaying plant matter had been charred away. Their burns coaxed new stalks up from burnt back vegetation, prompted greater fruit yields in successive years and stopped the fastest growing plants from choking out other vegetation. After controlled burns, forests were more spaced out and less likely to burn down in the event of a natural fire. Water levels in nearby rivers and streams rose after fires reduced plant life that was absorbing groundwater. A recent study even showed that native bees survive harsh climate events better in areas with smaller-severity mixed burns! The frequency and extent of historic cultural burns were varied, as were the areas that got burned, leading to the formation of “environmental mosaics” — complex patchworks of varied habitats that boasted high biodiversity and were cultivated for various foods, medicines and materials. These fires kept the ecosystem healthy and provided for the native people’s way of life by making the environment more bountiful. In contrast, the unnaturally intense fires of today burn too hot and too large to be considered beneficial; they scorch the soil and can topple the large trees that would normally survive smaller blazes.

Why are fires so bad now?

The short answer: poor land management. Over the past 100 years in particular, U.S. government agencies have taken a zero tolerance approach to wildfires, outlawing all intentional burning and using resources to extinguish every blaze that cropped up, full stop. With the establishment of the national forests and the creation of the U.S. Forest Service in 1905, Anglo-American conservationists argued that protecting these forests from fires was paramount to ensuring the forests’ survival. Ecological scientists had yet to recognize the necessity of allowing some areas to burn throughout the year. Then, in 1910, catastrophic fires swept across Idaho, Montana and Washington, burning 3 million acres in 2 days in an event dubbed “The Big Blowup.” This event, just five years after the U.S. Forest Service’s  inception, deeply influenced the budding agency. Its administrators were convinced that the fires could have been combated with more men and equipment, and further argued that total fire suppression was the necessary preventative measure to stop such blazes from occurring again. The government cracked down more on all people conducting burns on their land, from the already oppressed native peoples to ranchers that used burns to maintain their pastures for grazing. Forest Service officials considered the “Indian way” of using small fires to be primitive and destructive.

Although recent decades have seen some reversals on the zero-tolerance policies towards forest fires, the “prevent and suppress” mentality of the early U.S. Forest Service still permeates fire policy to this day. The results of a century of fire suppression have left California especially vulnerable to the historic blazes we are now living through. Forests have become thicker, with many thinner trees in the spaces between large ones, while underbrush and dead trees have accumulated over decades. Ecosystem imbalance notwithstanding, this buildup of plant matter has created a tinderbox of dense and dead material ripe for burning. Eventually, when fires do start, there is so much material ready to burn that the blazes burn larger and hotter than those in centuries past. These megafires kill citizens, destroy property, devastate the environment and cost tens of billions of dollars in total damages. They force thousands of residents to evacuate and relocate, pump inordinate amounts of pollutants into the air, and contribute to climate change by releasing tons of carbon dioxide into the atmosphere.

Make no mistake, these blazes are human-caused phenomena. The accumulation of tinder over decades from the total suppression of wildfires has created a breeding ground for such infernos. And then there’s the looming threat of climate change. As average temperatures rise and dry seasons lengthen, the likelihood of more powerful fires increases. The result is a compounding effect where a landscape full of flammable material gets hotter and drier, creating a perfect storm of conditions for truly massive fires. So far, the trends have been alarming: eight of the ten largest fires in California’s history have burned in the last decade, and the ten largest fires from 2011-2020 burned over 5,400 square miles while the ten largest from 2001-2010 burned just 2,500 square miles. This year in particular has shattered records: 5,000 square miles have already burned, making it the worst recorded season to date. That figure will likely grow, since this season has yet to reach the usual Autumnal peak. Costs have been skyrocketing as well; in the 1980s, the California Department of Forestry and Fire Protection averaged expenditures of $25 million per year, while in the last decade annual expenditures averaged $401 million. Note that these costs are only one state level agency, and only regarding fire suppression expenditures. Costs are allocated between local, state and federal governments depending on where the fires originated. Moreover, total costs are many times higher: AccuWeather estimated that the 2019 fire season cost over $80 billion in total damage and economic loss. Preventing these fires will become ever more crucial as climate change ramps up, and controlled burning presents a cost-effective and safe way of removing tinder before it becomes fuel for giant, out-of-control infernos.

How would modern prescribed burns work?

Prescribed fire has been gaining popularity as a policy option for managing forests. As it turns out, science backs up what native peoples have known for thousands of years: balanced forests need fire. The U.S. Forest Service has changed its stance, now noting the benefits of prescribed burns. In their words, “more prescribed fires mean fewer extreme wildfires and further progress towards restoring our ecosystems that benefit from fire.”

But how exactly do prescribed burns work? Fire must be treated with extreme care and thoughtful planning — you don’t just light some brush and leave it to burn. In order to conduct safe prescribed burning, experts must draft burn plans that take into account temperatures, wind, humidity, vegetation, and smoke dispersal. Experts who have intimate knowledge of the land must carefully monitor fires. It is important to have adequately sized teams covering the fires, so that no area is left unattended, and misbehaving flames can be quelled with water. One method for small controlled burns includes burning a fire inwards towards a central point, so it extinguishes itself. Often, these burns are low-lying and preserve most trees, forming a “burn line” along the ground. They look quite different from the raging infernos that we see in the news.

This strategy is applicable to regions beyond California. In fact, native tribes on the East Coast commonly used prescribed fire, and prescribed burns now form an integral part of public and private land management policies across Southeastern United States forests. On the other side of the world, aboriginals in the Australian bush have used fires in similar ways for tens of thousands of years. European colonization halted many of these burns, leading Australia down an eerily similar path to California with weakening ecosystems and increasingly destructive fires.

Actionable policy moving forward requires a massive scale-up in the number of prescribed burns in California each year. A 2018 report published by Crystal Kolden of the University of Idaho’s Department of Forest, Rangeland, and Fire Sciences found that between 1998 and 2018, numbers of prescribed fires remained mostly stable in the American West, with decreases in some areas. Kolden reports that federal agencies have not shifted budgets and practices enough to meet the land’s demand for prescribed fires, which a study published in Nature Sustainability pegged at an alarming 31,250 square miles, or 20% of California. Actualized prescribed burns in California are closer to 100 square miles a year, though some state leaders have been trying to raise this number.

The ideal path forward involves cooperation. First, it is important to respect and draw upon indigenous knowledge of fires and the landscape and to let those who have been calling for returning to prescribed burning — like the Yurok and Karuk people — teach the community their methods. Representatives from these tribes have joined the Prescribed Fire Training Exchange (TREX) to bestow their knowledge on private landowners and firefighters from across the planet in guided prescribed burns. More such instruction, ideally with financial support from the state government, is desperately needed if communities are to become more fire-resilient moving forward.

It is equally important to make sure state and local governments are on board, for they present many of the obstacles to prescribed burns. Fire crews are exempt from environmental protection laws while fighting emergency fires, but because prescribed burns are purposefully started they must adhere to all compliance rules, such as Clean Air Act stipulations limiting amounts of particulate emissions from human-caused events. Appropriate government action should include the following policies: diverting more funding towards prescribed burns in the forest management budget; working with native tribes to synchronize government and tribal burns and create a cohesive map of areas scheduled for burning; educating the public about the benefits and low risk of proper prescribed burning; loosening restrictions that hamper the deployment of safe prescribed fires.

Finally, the California community must become cognizant of the true value that fires can have, if used properly. Public awareness, acceptance and cooperation is key to ensuring that safe prescribed burns can be conducted. In the same way that water is essential for healthy crops, but too much water can drown a harvest, fire must be viewed as a resource that must be used thoughtfully, not eliminated completely.

Alexander is a Staff Writer for the Opinion Section.