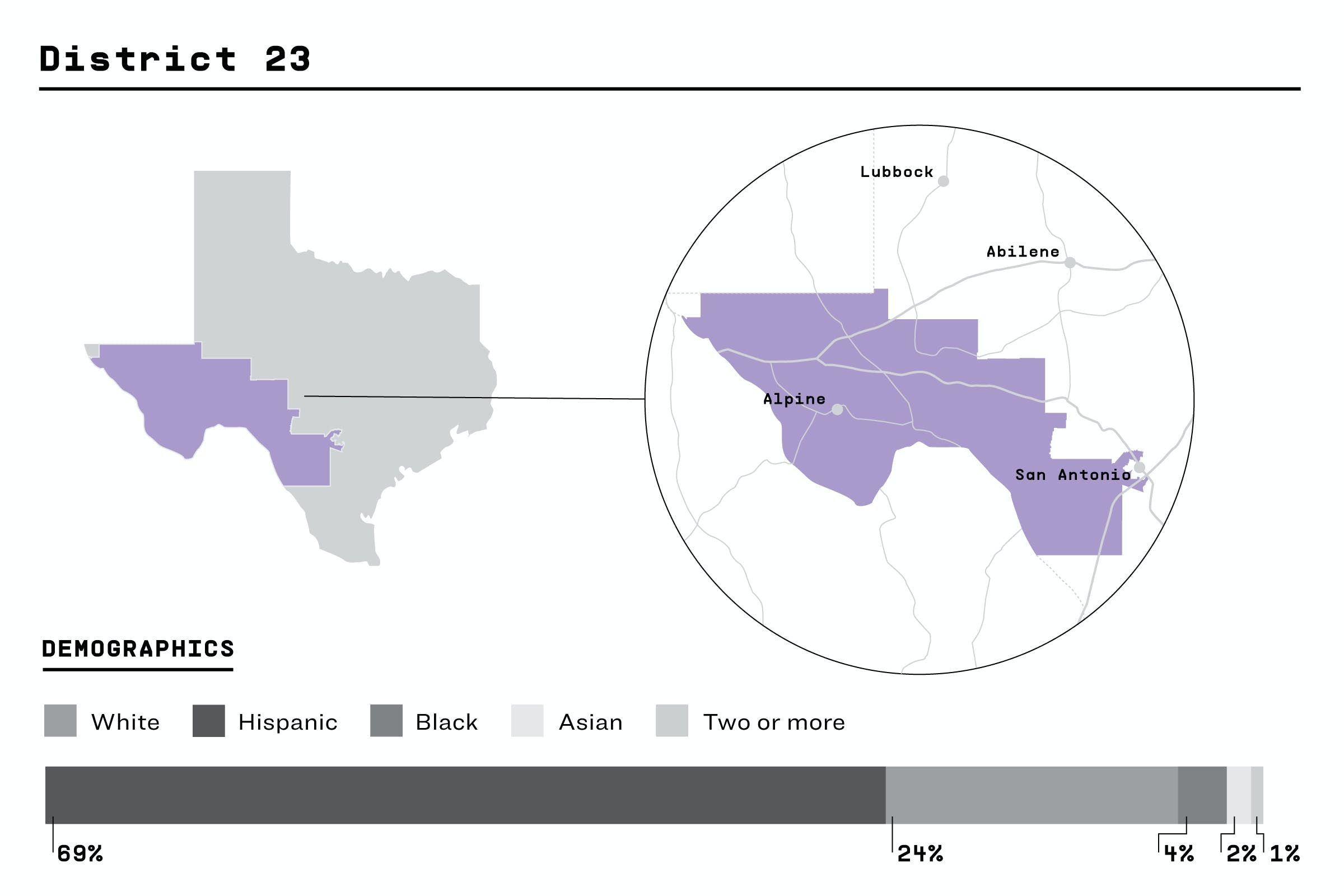 One of the most notable potential political shifts in the 2020 election is a shift in the electoral lean of Texas. It has long been a Republican stronghold. However, changing demographics and political coalitions is putting the state into play for Democrats at the presidential level for the first time since 2000, when President G.W. Bush won by over 20 points.

That said, it is uncertain whether Texas will flip blue. Thus, much of the Democrat activism in the state has focused on other offices. Democrats are hoping to build electoral strength through targeted pickups.

Texas’ 23rd congressional district is one of those targets — a seat that has been held by a Republican that may flip in 2020. TX-23 was held by Republicans for over two decades before flipping Democratic from 2007 to 2010 and from 2012 to 2013. What was once a stronghold due to gerrymandering became a swing district through court-mandated redistricting; this year we will see if the competitiveness continues.

TX-23 is unique in many ways. The incumbent, Will Hurd, is not running for re-election in 2020, leaving the seat open. Hurd is currently the only Black Republican in the House. Additionally, he is the only Republican from a district along the U.S.-Mexico border.

Another unusual aspect of the district is its size — it stretches 520 miles across what is functionally the entirety of southwestern Texas. Its shape is less the result of having to represent sparsely populated areas.

Democrats tend to be significantly stronger in urban districts. However, TX-23 is geographically mainly rural. If captured by the Democrats, this would be one of the rare majority-rural Democratic seats.

Some demographic characteristics are more favorable to Democrats — such as the relatively high Hispanic population, primarily of Mexican origin (in 2016, 64% of Latino voters identified with or leaned towards the Democratic party). Trump being on the top of the ticket matters because Hispanics may otherwise be amenable to more conservative candidates; in a Pew Research survey conducted in 2016, 32% of registered Latino voters identified as conservative versus 28% as liberal, with the remainder identifying as moderate. Hurd narrowly won the 2018 election by 0.44 percentage points, and did so in part by running a centrist campaign that wasn’t afraid to challenge the Trump administration, although never in a significant fashion. The close margin and large Hispanic population make this seat especially primed for pick-up by Democrats.

If Jones, a former Air Force intelligence officer, does win the seat, she would be the first openly gay and first Filipina-American congresswoman from Texas.

So far, Jones has raised significantly more money than Gonzales, and polls currently have her leading by a thin margin. The polling data from the current election and previous ones (the district voted for both Hillary Clinton and Beto O’Rourke by small margins) indicate that this will likely be a Democratic pick-up.

This House election is a microcosm of larger shifts in the American political landscape. The Hurd-Gonzalez transition reflects a rightward shift, with centrist Republicans being replaced by Trumpist populists. We also see another example of a competitive district in the Sun Belt district. In November, we will see whether the Democrats will be able to maintain and expand their new competitiveness. The Sun Belt is forming a newly competitive region, especially as Democratic appeal expands further into the suburbs.

However, a Democratic victory here will far from solidify the region for the party. As mentioned before, in Trump’s absence, Texan Hispanics may instead vote for a conservative candidate. If Jones captures the seat and Biden wins the presidency, the long-term future of the district remains unclear.