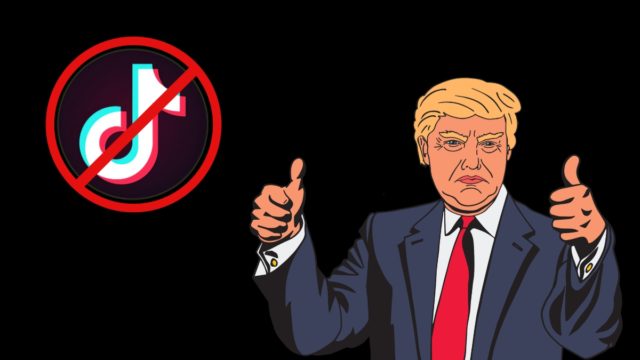 The Clock is Ticking, but on Trump not TikTok

TikTok, the app that Americans have come to either love or hate, is the most popular social media app in the U.S. right now. Originally known as the lip-syncing app Musical.ly, TikTok has become a cultural emblem of Gen Z, with 60 percent of its users falling in the age group.  Like other social media platforms such as Facebook, TikTok poses various controversial questions to the U.S. government — except this time, it involves the concern that the app is actually Chinese spyware.

TikTok is owned by ByteDance, a Beijing company. While the company operates separately from the Chinese government, the national security concern lies in the possibility of Xi Jinping suddenly requesting access to the app’s database, which includes the information of millions of Americans users. These concerns have been unsuccessfully shut down by TikTok chief Alex Zhu, who has promised that the app’s user data is not subject to Chinese security law, and that even if the Chinese government requested, he would refuse access.

Furthermore, TikTok has had a streak of controversies. It’s been accused of reading keystrokes on Apple devices, shadow banning Black Lives Matter (BLM) related content, and censoring videos containing topics sensitive to the Chinese Communist Party (CCP), including Tibetan independence and the Hong Kong protests. The faults and allegations that have drawn international attention, however, have mostly been resolved and addressed through various bug fixes and public statements clarifying what happened. In response to concerns regarding TikTok’s alleged connections to the Chinese government, the TikTok released a public statement saying that it does not “remove any sensitivities related to China” on the app. TikTok also released a statement claiming that the app’s U.S. moderation team based in California has never operated in China nor operated under the restrictions of Chinese law.

Moreover, TikTok has undeniably become a tech giant competitive with Facebook. As of May 2020, TikTok ranked #2 in most downloads in the Apple Store, #1 in the Google Play store, and topped the list of all downloads total in 2020. According to a study conducted in 2019, younger teens (ages 13-16) are as likely to use TikTok as Facebook and Twitter. Because the use of TikTok is spearheaded by Gen Z, especially those born after 2004, there is no doubt that Generation Alpha will follow if TikTok is here to stay. Trump and protectionists argue it’s only fair to ban TikTok, as American exports like Facebook and Google have been banned in China.

That’s why on Aug. 6, Trump signed an executive order stating that the app would be banned by Sept. 20. Like with the COVID-19 pandemic, his anti-China rhetoric is concerningly black and white. This isn’t to suggest that TikTok is a perfect app — skepticism of TikTok is justified. Relevant U.S. departments should thoroughly assure that there isn’t any reported censorship of politically sensitive content to the CCP, and TikTok should, with evidence, address American concerns of misinformation and security on the app. TikTok, as an import, should be scrutinized from top to bottom to confirm that it operates with complete transparency. However, to go as far as threatening to fully ban the app that over 170 million Americans have downloaded is too rash. In fact, TikTok filed a lawsuit against the Trump Administration for depriving them of due process.

But that isn’t all there is to this political drama. National security concerns and American protectionism simply masquerade the other underlying motivations behind banning TikTok. Trump’s relationship with the short-video app is personal. On June 20, Trump hosted a rally in Tulsa, Oklahoma at an auditorium with a capacity of 19,000 people. His campaign team forecasted the rally to be flooded with overwhelming support. However, on the day of the rally, only a disappointing 6,200 showed up, humiliating Trump. This low turnout may be credited to a prank on TikTok, in which circulating videos with over millions of views proposed people RSVP to the rally and not show up. Rep. Alexandria Ocasio-Cortez seemed to confirm Trump’s worst fears — that the failure of his rally can be explained by these TikToks. Less than seven weeks later, Trump signed an executive order with an ultimatum to ban TikTok.

Anti-Trump sentiment among Gen Z is particularly inflamed on TikTok. While political discussion on Instagram is limited to infographics and comments sections, Twitter to messy and sometimes incomprehensible debates, and Reddit limited by volunteer moderators who impose wildly varying restrictions on conversation, TikTok provides a venue for the younger generation to communicate their opinions and ideas through comedic (or serious) videos, sounds or texts that correspond to ongoing trends. These 15-to-60-second videos have become an apparatus for political expression; they are used to explain basic policy concepts to teenagers or pre-teens. What distinguishes TikTok as a political platform from other social media apps is that these videos aren’t produced nor narrated by middle-aged newscasters or lecturers — it’s someone your age talking to you. Unlike other apps, TikTok is more accessible, conversational, and relatable for Gen Z.

TikTok as a political instrument is thus especially dangerous to Trump, who closely relies on digital media to promote his platform. There are two main problems with Trump banning the app within the U.S. First, the ban suggests that he is a leader who is intolerant of any speech that is targeted against him. Second, this would set a concerning precedent in which the U.S. government would be able to control what information Americans can legally consume.

This drastic decision to ban TikTok and stoop so low as to infringe on Americans’ right to free expression is a culmination of Trump’s piling insecurities. Contextually, 2020 has been a thread of unprecedented challenges for the Trump Administration. The increased prioritization of climate change further isolated Trump from young and first-time voters. The disturbing murders of Breonna Taylor in March and George Floyd in May revitalized the Black Lives Matter movement and prompted a surge in voter registration of Democrats and independents. The Tulsa rally prank coordinated by teens on TikTok communicated that Gen Z — of which 24 million are eligible to vote in this upcoming presidential election — is an emerging political force. The distrust and dismissal of medical science and the gravity of the COVID-19 pandemic, which has taken the lives of over 200,000 Americans as of September 2020, has and continues to devastate families across the country, leading to a disillusionment that Trump’s leadership cannot withstand and contain this disease. Lastly, the severe economic crisis caused by the pandemic further pressures the Trump Administration to find a solution that would resuscitate the economy and the millions of jobs lost.

The TikTok ban can be seen as a clear symptom of Trump’s insecurity. In addition to the humiliating Tulsa rally prank, he is losing popularity, even among his most strident supporters. A woman in Georgia who voted Trump four years ago said his mismanagement of the coronavirus “was the final straw” for her. Another former supporter in Jacksonville, Florida was disenchanted by his lack of a mature and compassionate response to the murder of George Floyd, concluding that he didn’t feel like “[Trump] was for the people” anymore. The upcoming election, essentially a referendum on his presidency, isn’t rendering him any confidence — his approval rating hovers around 42 percent, he is losing some of his 2016 voters, and voter turnout is expected to be groundbreaking, making the election all the more competitive. With a TikTok ban, Trump would be salvaging the remaining scraps of his dignity, all while silencing the millions of Americans on the app.

The fate of TikTok is not just associated with the fears of what Chinese ownership can mean for American users, as Trump claims; it also has to do with the withering of his appeal. Non-American perspectives have even questioned Trump’s personal animosity for the app. A 19-year-old Dublin college student said, “I feel Trump just wants to get rid of it [TikTok] because he is scared about people having a voice against him.” Similarly, a Bay Area high school junior and TikTok user, who asked to remain anonymous, criticized the timing of the ban, saying it shouldn’t be a priority given the different crises the country is facing right now. In the midst of a pandemic, nationwide protests over unjust murders, and the terrifying effects of climate change seen in the recent wildfires ravaging the West Coast, Trump has instead prioritized cracking down on an app where teens and young adults alike have posted memes ridiculing him.

Some expect Trump’s TikTok ban to backfire, especially due to the anticipated electoral impact of Gen Z, but it could potentially help him in his campaign for re-election in November. As seen with Trump’s politicization of COVID-19, incessantly referring to it as the “Chinese virus,” or interchangeably the “Wuhan virus” or “kung flu,” Trump has always been brilliant at puppeteering the media and shepherding his supporters’ views. According to a Pew Center poll published on July 30, “negative views toward China among Republicans have increased 11 percentage points.” As a result of this intensification of U.S.-China relations in recent months and Trump’s emphasis on an anti-China stance, the question of TikTok has been politicized, with most of the conversation focused on China. Despite TikTok never having operated in China, its Chinese ownership has become its defining trademark — not the app as a common space for free speech and political engagement, not the role it played in the Tulsa rally and not the freedom of expression its users have. Regardless, Trump’s use of China as a scapegoat has worked, with a solid 69 percent of Republicans supporting his ban despite only 32 percent of them actually being familiar with the app.

With national security concerns and American patriotism as a firewall, Trump is using the TikTok ban to camouflage his lack of confidence in his own leadership. He is attempting to ban the app not in protection of the American people, but in pursuit of preserving his image in the media. The U.S. government should investigate TikTok, and the U.S. government should guarantee that TikTok’s American operations are transparent and secure. But the app should not be banned to level some economic playing field with China, nor should it be banned simply due to ByteDance being a Chinese company. We should not neglect the fact that TikTok has become a hub for exchanging ideas, information, and opinions. To deny TikTok an American presence without due process would be refusing Gen Z and other TikTok users the freedom of expression and an outlet for creativity. TikTok and its Gen Z users have presented an unusual but powerful opposition with tangible, unprecedented impact. Trump’s plan to quash TikTok only confirms this.