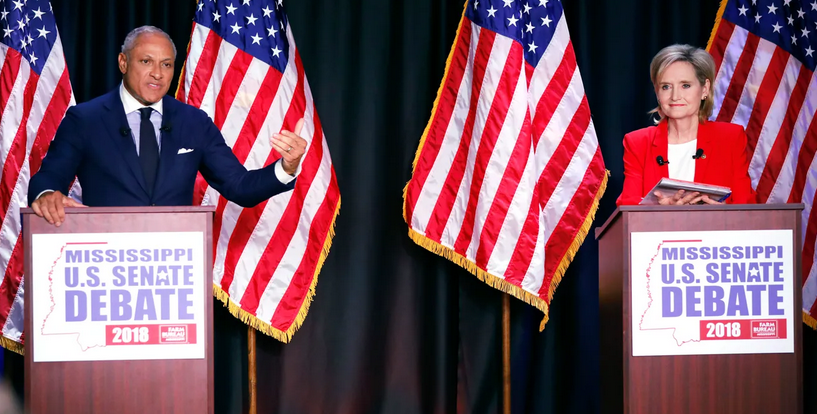 The Democratic Party has managed to expand the electoral map in nearly every direction this cycle, making Republicans play defense in once-strongholds like Alaska, South Carolina, and Texas. Perhaps no other state becoming contentious is as shocking as ruby red Mississippi, where former US Secretary of Agriculture Mike Espy is making a realistic bid to become the first African-American to represent the Magnolia State in the Senate since Hiram Rhodes Revels served as the first African-American congressman ever, 150 years ago.

If you think this sounds like a long-shot, you might well be right. The incumbent Republican, Sen. Cindy Hyde-Smith, won this seat in a special election (against Espy) in 2018 by more than seven percent. Moreover, Mississippi hasn’t had a Democratic senator since the 1980s and polls in this race have shown Espy trailing Hyde-Smith by as much as 28 points. In recent weeks, Espy has raked in millions of dollars in donations, far outpacing Sen. Hyde-Smith, as one of many Democratic Senate candidates benefiting from a nationwide fundraising surge. More importantly, the polling gap seems to be closing, with one poll showing Espy with only a single point deficit.

While Democrats have shown their ability to win even in the Deep South, with wins by Sen. Doug Jones and Gov. John Bel Edwards, Mississippi is certainly not the first place to look for a seat to flip; after all, Jones is widely expected to be ousted from his seat in Alabama this year. Moreover, all indicators point to President Trump coasting to victory in states like Mississippi, and Sen. Hyde-Smith has tied herself quite closely to the Trump brand, voting in line with the President 94.5 percent of the time. Since Sen. Hyde-Smith has no obviously exploitable political flaws, it seems logical that clinging to Trump’s coattails will allow her to ride to her first full Senate term.

Many believe Epsy’s chief political hopes lie in mobilizing the almost 40 percent of Mississippians that are Black — the highest proportion of any state — and capturing a portion of the moderate white population that traditionally sends Republicans to Washington. Espy did fairly well at achieving these goals in 2018, and Democratic operatives hope that the energization of both a presidential election year and the historic protests following George Floyd’s death this summer will push him to victory.

All this accounted for, political modeling site 538 gives Mike Espy only a 13 percent chance of victory at time of writing — notably higher than President Trump’s calculated odds at reelection from the same modelers. If one does not dismiss a second Trump term as impossible, it seems they shouldn’t count Espy out either. So while the nation nervously watches Florida, Pennsylvania, and a few other swing states on November 3rd (and the days to follow), keep an eye on Mississippi for any surprises.

Critically, a Republican loss of this seat would almost certainly doom their chances at holding the Senate, but this race also has broader significance. There has been widespread speculation in recent weeks that Republicans are distancing themselves (for political, not public health, reasons) from Donald Trump. Sen. Hyde-Smith has practiced no such distancing. A Democratic win, or even a close race, could therefore prove a rebuke not of Trump himself, but of Trumpism more broadly.

If conservatives like Sen. Hyde-Smith find that their political fortunes are no longer buttressed by echoing Trumpian rhetoric, they might as well abandon it altogether. Republicans like embattled Texas Sen. John Cornyn already seem to be doing so.

If we suddenly live in a post-Trump political world, this adherence to or abandonment of Trumpism by remaining Republicans will undoubtedly prove to be one of the prime political questions of the era.

Aaron joined BPR as a first year student in Fall of 2019. He subsequently edited for the United States section, and serves as Co-Editor in Chief for the 2021-2022 academic year. Aaron's primary interest is in American electoral politics, with passions for housing policy and the green energy conversion as well.