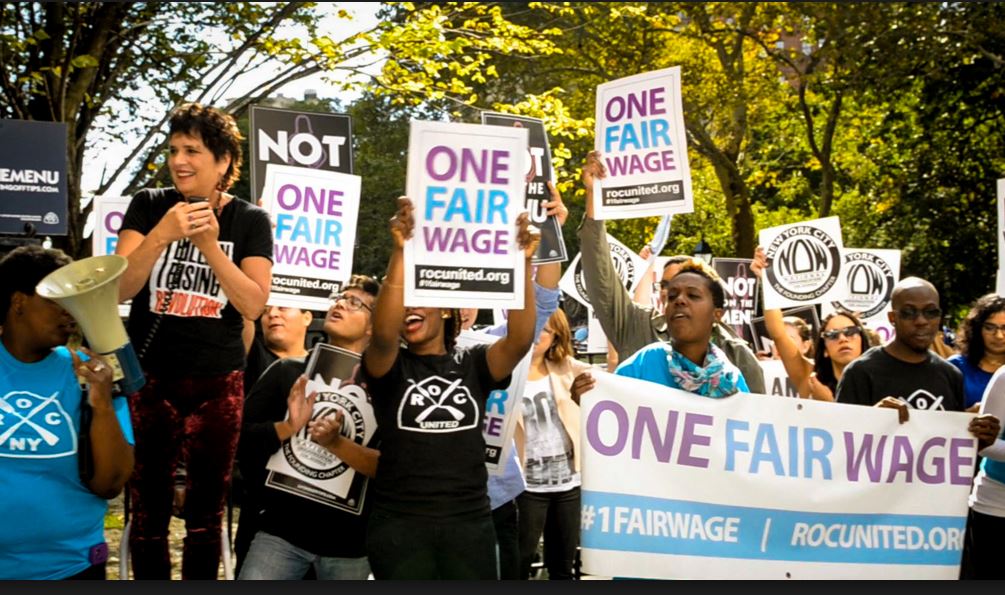 Skyrocketing Unemployment Presents Need for a One Fair Wage

As unemployment skyrocketed during the first few months of the Covid-19 lockdown, one group of workers stood at a particular disadvantage. Tipped service workers in 43 states did not get sufficient unemployment benefits because they are paid a subminimum wage. These wages are as low as $2.13 in states such as South Carolina, so most service workers in these states live off of their tips. Even absent a global epidemic that caused massive layoffs, subminimum wages, and lack of unemployment benefits for tipped service workers presents a case of systematic economic inequality within the service industry.

Even under normal economic conditions in the United States, 40 percent of restaurant workers live in poverty, according to the Restaurant Worker’s Community Foundation. Those above the poverty line often live paycheck-to-paycheck. The U.S. Department of Labor reports that workers in the restaurant industry earn one of the lowest median wages of all workers. A central cause of these statistics is the subminimum wages paid to tipped workers. Restaurants are technically required by law to maintain the wages of their tipped workers if tips fall under a certain amount, but this regulation has proved difficult to enforce. The Department of Labor found that 84 percent of 9,000 restaurants had violated this policy between 2010 and 2012.

One Fair Wage is a non-profit organization fighting to alleviate these common issues for restaurant workers by advocating for tipped service workers to be paid the state minimum wage and keep their tips as well. This OFW policy is currently in place in eight states: Washington, California, Minnesota, Montana, Alaska, Oregon, Michigan, and Nevada. Restaurant workers and the Economic Policy Institute have observed a 20 percent reduction rate in poverty within the service industry and a 50 percent lower rate of sexual harassment. Servers find this OFW policy beneficial to their financial well-being and safety at their jobs. Many female restaurant workers report that they feel safer since their income no longer depends on interactions with guests and toleration of inappropriate behavior, resulting in a decrease in sexual harassment. The report also found that women servers in subminimum wage states are more likely to be told by their managers to alter their appearances and “to wear sexier, more revealing clothing” than women in OFW states.

In 2019, the OFW policy passed the US House of Representatives but was rejected by the Senate. Because of this, One Fair Wage has shifted its advocacy efforts to the state level. In January of 2020, Governor Cuomo of New York announced that the state is planning on adopting the One Fair Wage policy and eliminating subminimum wages. There has been some opposition from restaurant workers that OFW will lower the number of tips they will receive as well as the number of available service jobs. However, these concerns have been proven to be myths. In the eight states with OFW, restaurant sales have increased by 17 percent from 2017-2018 compared to the 15.6 percent increase for states without OFW. Even accounting for highly populated states without OFW, such as New York, several OFW states still report sales increases of one to two percent higher than that in New York. Servers in San Francisco report higher tipping rates than those in New York City and Washington D.C., despite three of these cities having similar high living costs. In addition, restaurant employment has actually increased greater in OFW states (14.4 percent from 2012-2017) than subminimum wage states (11.7 percent from 2012-2017).

In April, One Fair Wage established a fund for all tipped restaurant workers who were laid off from their jobs because of COVID-19 and were unable to properly receive unemployment benefits. These workers were at a disadvantage since the unemployment benefits are based on claimed wages, tips and filed taxes. Employers often report wages and tips of their workers, yet the Treasury Department estimates that about 52 percent of tips are not reported, preventing workers from receiving adequate benefits. In the eight states with OFW, workers receive the minimum wage for their unemployment insurance regardless of whether they or their employers have claimed their incomes.

As many restaurant workers who live paycheck-to-paycheck are still falling short of the amount they need for food and other necessities, the ongoing economic crisis illuminates the need for the One Fair Wage policy to be instituted. The restaurant industry is known to lack workers’ benefits like adequate paid sick and maternity leave. The One Fair Wage policy is a step towards bettering the industry and making it safe for all workers.