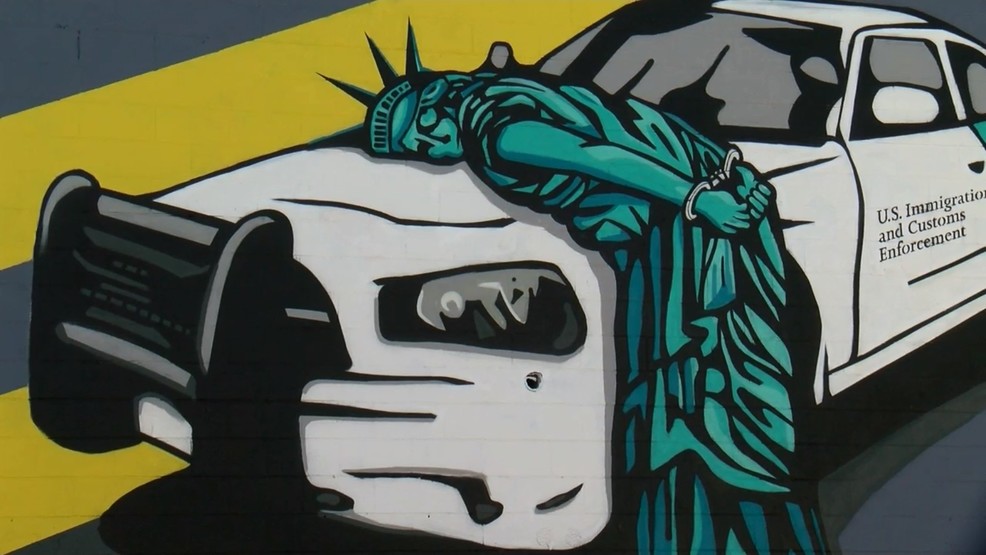 Last week, Dawn Wooten, a nurse working at an ICE detention facility in Irwin County, Georgia, filed a bombshell whistle-blower report which alleged that female immigrant detainees were being subjected to forced hysterectomies among other unnecessary, non consensual medical procedures. Georgia’s Congressional Republicans have vehemently denied this report, and Department of Homeland Security 2nd-in-Command Ken Cuccinelli has claimed that the Irwin County facility has only had 2 documented hysterectomies occur over the past four years — but according to Representative Pamila Jayapal, a member of a delegation of House Democrats who traveled to Georgia to inspect the facility, “after hearing from women who were sent to the same doctor, it’s clear they were having unnecessary medical procedures done to them without their knowledge or consent.”

While this horrifying report is localized to one particular doctor in a Georgia facility, the report is indicative of  a larger pattern of ongoing medical neglect and abuse which is found in ICE’s still-growing network of over 200 detention facilities. Due to a willful negligence to take proper precautions, ICE detention facilities have exploded with over 6,000 Coronavirus cases; seven detainees have died, one of whom was a 60 year old man whom a federal judge had two months earlier ordered the release of from jail due to concerns he would not be able to protect himself against the virus. Even worse, according to an ACLU report, ICE detention center facility staff are purposefully slow on enacting necessary medical treatments — detainees reported that facility staff would take up to a week to set broken bones or even out-right refuse to administer potentially life-saving medicines. These reports are corroborated by a recent congressional inquiry which, after a year-long investigation, concluded that “immigrants in US custody faced widespread failures in medical care, including some issues that resulted in death.”

But the issue is not just negligent medical care — these facilities are also rife with brutality, abuse and gross mismanagement. The aforementioned ACLU report detailed allegations of immigration officers withholding food from detainees, slamming detainees against the wall, calling them “rats”, and other various despicable abuses. Further, over the past four years, the federal government has, rather horrifyingly, received over 4,500 complaints of sexual abuse against immigrant children being held in government-funded detention centers — and, according to reports from the U.S. The Justice Department, the U.S. government has lost track of nearly 3,000 migrant children that were under its care over the past two years.

ICE has been around since 2003, but these trends of deteriorating conditions and increasing abuses of power have accelerated alarmingly in the Trump era. It is notable, then, that this acceleration of abuse is occurring parallel to a general radicalization, expansion, and “unchainment”, so to speak, of ICE that has also occurred under the Trump administration. In 2016, when then-candidate Donald Trump won the election, ICE’s acting director rejoiced that Trump would be “taking the handcuffs off” and letting the agency finally work as intended; sure enough, in 2017, the agency opened 40 new detention facilities, and the number of ICE arrests has continuously risen each year since. Possibly even more telling, under the Trump administration the number of immigrants arrested by ICE who did not have any previous criminal record shot up to a record 40 percent. This incredibly aggressive expansion of federal anti-immigration policy is rather unprecedented in the history of the United States. Yes, shamefully, America in its history has closed its doors to refugees — like the Jewish refugees from 1939 Nazi Germany who the American government turned away —  and to certain ethnic groups, like in the 1882 Chinese Exclusion Act. But once immigrants have arrived, set up their lives and settled in, America has generally let them alone; before ICE, the government has never actively sought out and deported permanent-resident non-lawbreaking immigrants in any meaningful numbers.

It’s important to note that this aggressive expansion of ICE, not only in the Trump years but really over the course of the past twenty or so years, is occurring within the broader context of an ongoing, vast expansion of the United State’s increasingly repressive domestic security apparatus. Since 9/11, under the pretext of a war on terror, Congress has more and more granted the executive branch broad, expansive powers in the name of domestic security. The allowance of Bush’s practices of illegal torture at Guantanamo, the authorization of the National Security Agency to surveil American citizens without warrants the avowal of Obama’s extrajudicial drone strikes without the approval of Congress, are examples of this building unaccountability and power of the executive branch. But perhaps the most salient, and for our purposes most important, example of this is when Congress passed the Homeland Security Act in 2002, which consolidated a litany of previously unrelated federal law enforcement bureaus (ICE, the Secret Service, TSA, the Coast Guard, among others) under the umbrella of the Department of Homeland Security, granting the new federal agency the carte blanche power to deal with any activities deemed “dangerous to human life or potentially destructive or critical infrastructure or key resources.” The conjunction of the vesting of the executive branch with mass surveillance powers and the establishment of the Department of Homeland Security with such an expansive and vague mandate to detain people without cause or warrant has created a vast national security state which sees the executive branch squarely at the helm.

Despite the fact that these expanded federal powers were billed as a means to combat overseas terrorism, this burgeoning security-surveillance state has been increasingly turned inwards towards policing and repressing the marginalized of our own society. The DHS has funneled millions of dollars into surveilling Muslim-American citizens under Countering Violent Extremism (CVE) programs, which erroneously designate any Muslims vocalizing opposition to U.S. foreign policy or attending a mosque (both of which, I will remind the reader, are constitutionally protected acts) as “at risk” populations in need of surveillance. According to leaked FBI documents, African-American activists exercising their First Amendment protected rights to protest and vocalize opposition to U.S. government policy have also been targeted by surveillance programs under the completely baseless pretext of stemming “Black identity extremist violence.” And now, ICE has begun to use mass social-media surveillance, in large part aided by data gathered by commercial data brokers that contract with government agencies, to target and deport immigrants. Thus, the political machinery of the executive branch which Donald Trump is employing — from the new, surveillance-state backed ICE to Trump’s utilization of Department of Homeland Security to both brutally repress Black Lives Matter protests on the ground and surveil protestors electronically — has been slowly and bipartisanly constructed over the past two decades; Trump has only been in the right place at the right time to take advantage of and reorient said machinery towards his own political goals.

This recent expanded and uninhibited version of ICE has led many on the left to compare the agency to something like Nazi Germany’s Gestapo secret police. In 1933, Hitler, in a fashion not unlike how Trump has now reoriented the bipartisanly constructed DHS towards his own political goals, consolidated several secret police bureaus which had been initially built by previous Weimar Republic governments into the Gestapo in order to bolster his fledgling fascistic reign. The similarities between the Gestapo and ICE are fairly plainly visible. The Gestapo was responsible for mass raids against immigrants, commonly Jews who had lived their whole lives in Germany but lacked German citizenship; ICE is now similarly responsible for mass raids against migrants, many of whom have lived their whole lives in America. The Gestapo was utilized by Nazis to suppress political dissidents and “suppress anti-state tendencies”; ICE has already been utilized to target and deport political activists, as well as immigrants who have spoken negatively about ICE to the press.

Some might be understandably wary of unfurling hyperbolic Nazi accusations too quickly, citing such claims as premature and counterproductive — after all, the current administration does not share Nazi Germany’s murderous ideology of anti-Semitis nor is it putting migrants to death in mass in the same way Nazi Germany mass-executed Jews. But to this, I feel obliged to remind the reader that fascism is not an all-or-nothing affair. Fascism is a continuum. Nazi Germany’s genocidal extermination camps did not appear over night — no, the Gestapo began as a deportation force, and Hitler began by creating ‘detention’ camps for all those in society which the Nazis had deemed “illegal.” Further, with Donald Trump’s latest refusals to commit to a peaceful transfer of power should he lose the election due to “fraudulent ballots”, he has placed America, in many ways, in the same position as Germany was in 1933, when Adolf Hitler utilized the burning of the German Reichstag as a pretext to turn Germany’s democracy into a totalitarian state. Whilst these postulations might seem alarmist to some, to Yale historian Timothy Snyder, who is a top authority on Nazism, they are spot on: “The Reichstag has been on slow burn since June,” Snyder told the Washington Post in an interview. “The language Trump uses to talk about Black Lives Matter and the protests is very similar to the language Hitler used — that there’s some vague left-wing conspiracy based in the cities that is destroying the country.” Within this light, reports that ICE is training its agents in “urban warfare” in state-of-the-art, hyper-realistic simulations of homes and other urban environments should be viewed with extreme trepidation; should Trump need a paramilitary force of brown shirts to back the coup d’etat which his current political posturing is suggesting, he needn’t look any further.

At this critical juncture in American history we cannot afford to fall asleep at the wheel — the stakes of the game are clear. The U.S. government has been slowly, but surely, expanding the powers of the Executive Branch for some twenty years now, and a would-be dictator such as the one Trump is now formulating himself as, is perfectly poised to take advantage of it. As the days pass away, and we grow closer to the election, Trump will more and more test the limits of the executive office, and more and more tempt the flames of fascism; his administration has already announced that ICE intends to go a “deportation blitz” in the lead-up to the election, and he has already made hints to his white militia supporters to remain on “standby”. Thus, our response and resolve must be tenfold. We must recognize this crucial crossroads for what it is, and in so doing, we must take great care to learn from the horrors past — lest we be doomed to repeat them.