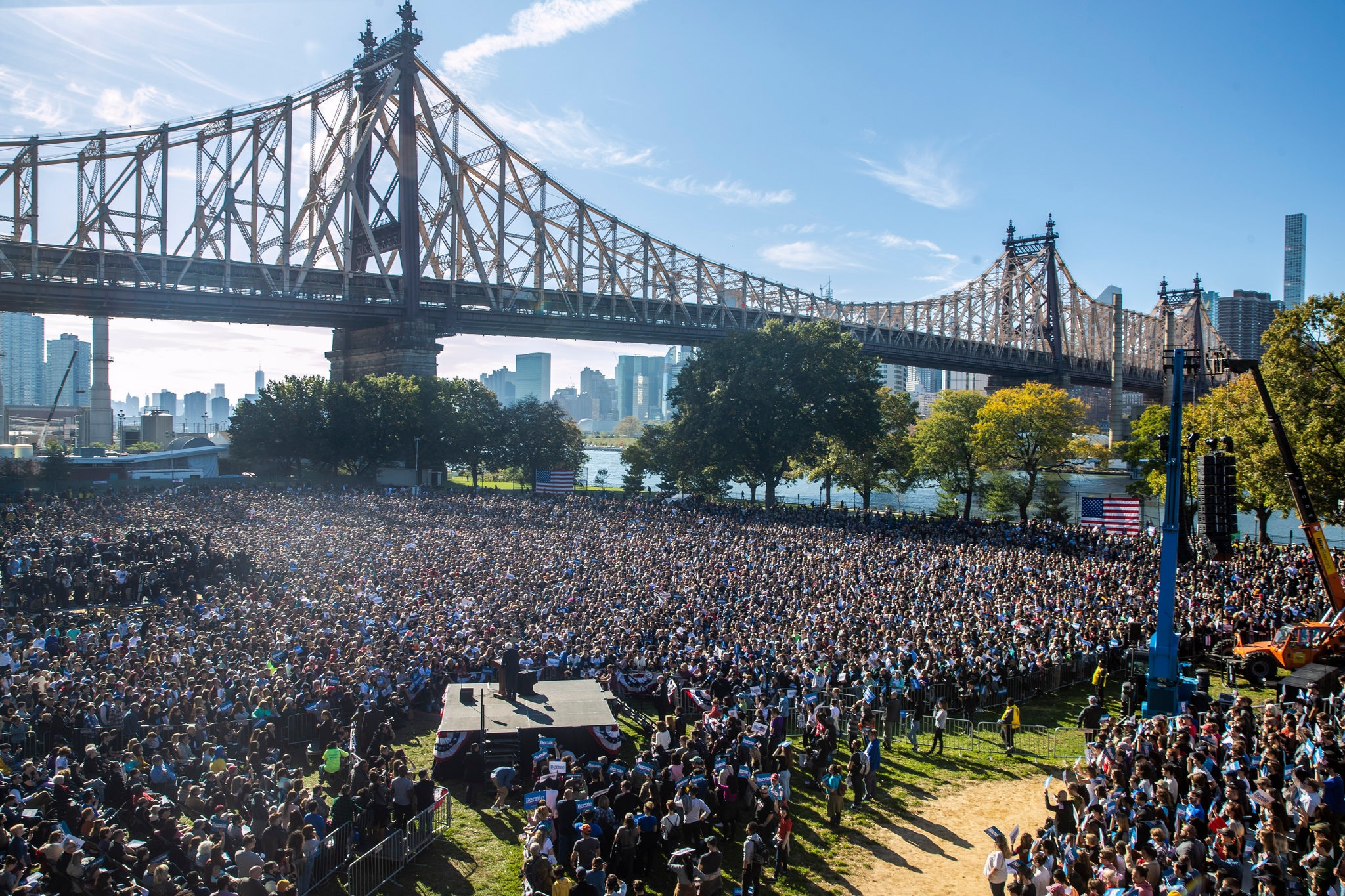 Progressives Sparked a Movement; The Democratic Party Killed It

As the progressive movement advances past the leadership of Bernie Sanders, it must come to terms with the difficulties in challenging the Democratic Party establishment. When Senator Sanders entered the presidential race in 2016, he hoped to shift the Overton window — the range of policies politically acceptable to the mainstream population — to the left on a number of issues. He introduced ideas like universal healthcare, tuition-free public college and a living wage. Hindsight has proven that Bernie’s efforts were massively successful. Ideas once deemed impossible and radical during the 2016 primary have now dominated the mainstream policy debate within the Democratic Party. One would assume that the candidate whose policies are more popular than any other candidate would win the nomination, so what went wrong for Bernie? Despite the popularity of Bernie’s ideas within the Democratic base and the general electorate, his campaign was ultimately unsuccessful due to his perceived lack of electability, rampant corporate media bias and institutional bias from Democratic Party leaders. Although progressives lack necessary control over these obstacles, they can proceed with an electoral strategy that rebrands their platform as the more reasonable choice for voters.

If there’s any issue to characterize the popularity of Bernie’s platform, it’s healthcare. Medicare for All was the centerpiece issue of the Sanders campaign, and it garnered widespread support from the American public. A May 2020 poll from the Kaiser Family Foundation found that 78 percent of Democrats and 61 percent of independent voters favor Medicare for All. Another poll from The Hill-HarrisX conducted in late July found that 67 percent of Americans support providing Medicare to every citizen, with 87 percent of Democrats and 69 percent of independents supporting the measure. While Bernie’s Democratic opponents were proposing healthcare plans that preserve the existence of price-gouging private insurance companies, Bernie was the only candidate to run on eliminating private insurance and lowering overall healthcare costs in his first term. The prevailing narrative within the party establishment was that Americans have the right to choose between private and public health insurance, yet Medicare for All was the only plan to guarantee that no one dies from lack of health coverage ever again.

Another popular campaign issue, particularly among young people and Black people who are disproportionately incarcerated for marijuana offenses, was marijuana legalization. A September 2019 poll from the Pew Research Center found that 67 percent of Americans support legalizing marijuana use. A more recent August 2020 poll from Data for Progress found that 58 percent of Americans support legalizing the use and sale of marijuana, including 69 percent of Democrats and 54 percent of Republicans. Evidently, there is a widespread and bipartisan consensus that no American should go to jail for cannabis use, yet the DNC was overwhelmingly opposed to including marijuana legalization in its 2020 platform. Bernie’s plan recognized the profoundly negative effect the war on drugs has had on Black and brown communities, and he aggressively advocated in favor of the American public’s stance on this issue.

Bernie’s platform even fared well on more controversial policy proposals like the Green New Deal. A July 2019 poll from Marist found that 63 percent of Americans think the proposal to address climate change is a good idea. In fact, another poll from Data for Progress suggests the climate plan is popular even in swing districts, with 49 percent of voters supporting the GND and 36 percent opposing. Needless to say, voters recognize the existential threat of climate change and largely share Bernie’s sense of urgency in addressing this issue with a bold climate plan.

It is abundantly clear that Bernie captured the vast majority of his party, as well as Americans more broadly, when it comes to the focal points of his campaign. However, Bernie failed to overcome a few important issues that inevitably lost him the presidency: electability, media bias and institutional bias.

The Triple Threat of Money in Politics

The problem of electability — the manufactured perception of electability — remains one of the greatest barriers to success for left-wing insurgents like Sanders. With the potential threat of a Trump reelection looming so large, Democratic voters were more concerned with beating Trump than nominating a candidate who agrees with them more on policy proposals. A Washington Post poll from February found that 58 percent of Democratic voters were most concerned with beating Trump, compared to 38 percent who were concerned with policy. Joe Biden had a strategic advantage in this regard because his entire campaign was staked on defeating Donald Trump. A CNN poll from January found that 45 percent of Democrats say Biden has the best chance at beating Trump compared with just 24 percent for Sanders, and Biden hovered around 40 percent mark on electability in Washington Post polls leading up to Iowa.

To add to these damning statistics, mainstream media outlets significantly bolstered the Biden campaign both in terms of quantity and quality of coverage. Pew Research polling found that 95 percent of MSNBC viewers identify as a Democrat or lean Democratic. A report from InTheseTimes indicates that Biden received three times more coverage than Sanders on the network, and Sanders was covered more negatively than both Biden and Warren, with 20.7 percent of his mentions being negative. For example, MSNBC legal analyst Mimi Rocah claimed, “Bernie Sanders makes my skin crawl. I can’t even identify for you what exactly it is. But I see him as sort of a not pro-woman candidate.” In another segment, MSNBC anchor Chris Matthews compared Sanders’ Nevada victory to the Nazi invasion of France, leading him to eventually resign. Most outrageously, MSNBC primetime anchor Joy Ann Reid brought on a “body language expert” who claimed Sanders was lying about his dust-up with Elizabeth Warren, citing his eye level and the turtling of his shoulders. It’s worth mentioning how MSNBC perpetuated anti-Semitic tropes like the “happy merchant” in this type of coverage of the potential first Jewish President. With 74 percent of MSNBC viewers being over the age of 50, the constant bombardment of negative rhetoric about “radical Bernie” coupled with positive praise of “electable Joe” undoubtedly had an impact on voters. After all, voters over 50 reliably show up on election day. CNN was also complicit in effectively serving as the cheerleaders of the Democratic establishment. Another report from InTheseTimes found that CNN’s coverage of Sanders was three times more negative than Biden following their blowout primary wins. According to the report, “In the 24 hours fol­low­ing his mas­sive win in Neva­da, Sanders received 3.26 times the pro­por­tion of neg­a­tive CNN cov­er­age than Biden did fol­low­ing the latter’s South Car­oli­na win — despite the two wins being by sim­i­lar mar­gins.”

In addition to media bias, former President Barack Obama interfered in the primary, urging both Amy Klobuchar and Pete Buttigieg to drop out of the race and endorse Biden, despite Buttigieg doing noticeably well in the first few states. With Warren still in the race to split the progressive vote and the moderate candidates consolidated behind Biden, the Democratic Party succeeded in kneecapping the populist insurgent who wanted healthcare for all. The American left must grapple with the fact that the Democratic establishment — and all the wealthy Wall Street donors their politicians are beholden to — will stop at nothing to hold onto power. The massive influence of money in politics has every structural advantage to kill a left-wing movement, but there’s one thing leftists can work on in the meantime: strategy.

When Bernie Sanders proudly declared himself a democratic socialist, he lost the ears of many older voters who hold a viscerally negative view towards socialism. In a Washington Post poll from February, 35 percent of Americans indicated that the “socialist” and “democratic socialist” labels make them more likely to oppose Sanders, compared with the opposing 10 percent. This sentiment is even reflected in the healthcare debate. A Kaiser Family Foundation poll on universal healthcare found that 63 percent of Americans hold a positive reaction to the terms “universal health coverage” and “Medicare-for-All”, while only 46 percent hold a positive reaction to the term “socialized medicine.” Evidently, the impact of anti-communist propaganda from the Cold War era still resonates strongly with older voters, and the party establishment weaponized this weakness against Bernie. While the party and media establishments worked to perpetuate this radical socialist narrative that scared off enough older Black voters and older suburban voters, the Bernie campaign embraced it. The left falls into a strategic pitfall when they conflate the abandonment of revolutionary rhetoric with the abandonment of revolutionary ideas. It is possible to maintain an unwavering commitment to policies like Medicare for All, legalization of cannabis, and the Green New Deal while also strategically framing these ideas as the more reasonable choice for voters. Leftists concede nothing when it comes to policy, but we must recognize that we will remain an exclusive, powerless club unless we present our ideas in a more palatable way to the average voter.

The COVID-19 pandemic has proven more than ever that Americans need a robust social safety net, and the left is willing to provide just that. What better time to argue for Medicare for All than when millions of people are falling ill to a deadly virus and facing absurd medical bills afterwards? The global pandemic and economic crisis further prove the need for leftist policies. Progressives need to begin framing their brand of politics as the reasonable, moderate position while exposing the Democratic party as the extreme alternative. It is extreme to call for milquetoast reforms and means-tested stimulus checks as 12 million people get kicked off their employer-provided health insurance and one in ten Americans are food insecure. It is extreme to tell voters that people-centered policies are simply too expensive, when the majority of Democratic senators voted against Bernie’s 10 percent cut in the military budget, which outranks the next ten countries combined. This strategy of appealing to voters’ sense of reason can easily expose how the Democrats (and the Republicans) are actually taking the radical positions of “reform around the edges” and corporate socialism in a time of widespread economic hardship. This strategy can effectively expose that the United States does not have a party of the left, only a party posing to be the left.

Lastly, it’s time to do away with the idea of party unity. It is not possible to engage in passionate criticism of the Democratic party while conceding that corporate Democrats are the preferable alternative to far-right Republicans. It is necessary to engage in dissent within the Democratic Party so that establishment Democrats must do better than simply being the lesser of two evils. Progressives and leftists cannot hand the system power and then demand it do our bidding. We cannot hold Democrats’ feet to the fire and make them support progressive policies while outwardly signaling that we will vote for them anyways. We must demand better while we have the most powerful weapon in our arsenal: our vote.