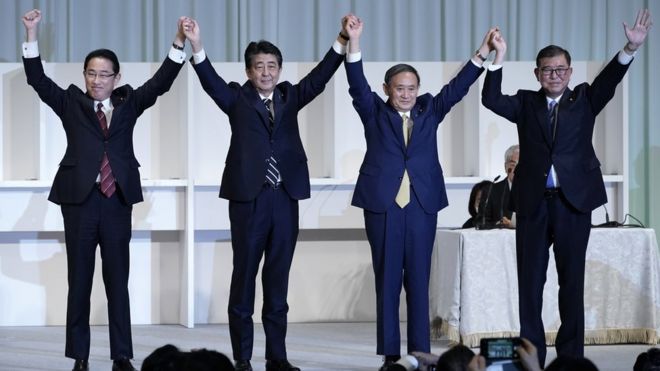 Under New Management: The Resignation of Japan’s Longest-Serving Prime Minister

Japan’s longest tenured prime minister, Shinzo Abe, announced his resignation due to complications with a chronic health condition on August 28th.  The sudden departure of Abe, one of Japan’s most consequential post-war prime ministers, has created yet another layer of uncertainty in a region currently mired in tension with China. Additionally, Japan has been devastated by the COVID-19 pandemic, leaving the country in economic disarray. The Japanese economy has been in a perpetual state of mediocrity ever since the burst of the asset bubble in the early 90s. The incoming prime minister will be faced with the challenge of steering Japan out of a spiraling economy while preventing tensions with neighbors China and North Korea from escalating into armed conflict.

On September 14th, Japan’s ruling Liberal Democratic Party (LDP) elected Yoshihide Suga as the new leader of the party as well as the successor to Shinzo Abe (formally announced on the 16th). Yoshihide Suga, previously the chief cabinet secretary under Abe, looks to replace Japan’s longest-serving prime minister after defeating former Foreign Minister Fumio Kishida and former Defense Minister Shigeru Ishiba to serve out the one year remaining on Abe’s term as party president. During a period of rising tensions and economic maladies, the sudden departure of Prime Minister Abe has left an already reeling Japan in a vat of uncertainty.

Who is Yoshihide Suga?

While Shinzo Abe was the epitome of Japanese hereditary politics (his grandfather, Nobusuke Kishi, was prime minister of Japan from 1957 to 1960), Yoshihide Suga began his political career from the proverbial “bottom,” serving in city government before being elected to the Lower House of the Diet (Japan’s legislative body) in 1996. Following his stint in the National Diet, Suga was selected by Abe as chief cabinet secretary in 2012, a position he served in for the entirety of Abe’s tenure as prime minister. As cabinet secretary, Suga held considerable power as the Abe government consolidated more of Japan’s decision-making and reined in bureaucratic influence. While having served in the second most powerful office in the country will undoubtedly help Suga, he does have a considerable gap in international experience compared to his predecessor that will prove to be a challenge. The general expectation is that Suga will not do much to overhaul the policy agenda set forth by Abe. However, his lack of diplomatic experience does raise concerns over how well he will handle a rising China and North Korea’s brinkmanship diplomacy.

Following the appointment of known Taiwanese sympathizer Nobuo Kishi as the new defense minister, Chinese Foreign Ministry spokesman Wang Wenbin responded by stating, “we also hope the Japanese side will abide by the one-China principle and refrain from any form of official exchanges with the Taiwan region,” alluding to the precarious position Suga finds himself in as the new head of state. Furthermore, if he intends on pursuing a foreign policy agenda that prioritizes a return to Japanese military self-reliance, this could further exacerbate relations with China. Recent tensions over disputed territory have started to intensify once again, as China attempts to make stronger claims to the Senkaku Islands, which China refers to as its Diaoyu Islands. Japan has remained resolute in its claim to defend what it views as its territory; while speaking at The Center for Strategic and International Studies (CSIS) on September 9, now former Defense Minister Kono Taro stated that Japan is, “…prepared to defend every centimeter of our land…,” when asked whether Japan would risk war with a nuclear armed China over this territorial dispute. For new Prime Minister Suga, this is just one part of the minefield he is now going to have to traverse over the course of his tenure as Abe’s successor.

With the resignation of Shinzo Abe it is important to reflect on the significance of his tenure as Japan’s prime minister, in order to understand the direction the country is currently taking and what that means for relations with its neighbors as well as its allies. So just how significant was Shinzo Abe? In many respects Abe was Japan’s most consequential prime minister since Shigeru Yoshida, the architect of the Yoshida Doctrine during Japan’s postwar revival. Not only did he serve for an unprecedented eight years, he also played a major role in restoring Japan as a leader within the international community, notably spearheading the Trans-Pacific Partnership (TPP) revival after the United States’ abrupt departure from the multilateral trade agreement.

Much like his Chinese counterpart, Prime Minister Abe ruled in line with his grand strategy for the future of Japan, one of nationalism and militaristic self-reliance. Part of this strategy emphasized a free and open Indo-Pacific, which has subsequently helped create stronger ties with India, Australia, and most of Southeast Asia. Although he did come up short in his plan to normalize relations with Korea and Russia, the leadership in those respective nations created a substantial roadblock. Abe also made a concerted effort to strengthen ties with the United States, in particular with regards to the US-Japan security alliance. What perhaps might be Abe’s most consequential policy strategy is his efforts to increase the role of Japan’s military through the reform of Article 9 of its US-written constitution. The provisions in this part of the Japanese constitution effectively outlaws Japan’s right as a sovereign state to war, thus prohibiting it to maintain a standing army or have foreign military bases. However, due to a lack of public support on the issue, Abe wasn’t able to make much headway, though Japan did pass legislation allowing its defense force to exercise collective self-defense, referring to the UN charter right of states to defend other states. The move to make Japan militarily self-reliant and to clarify the role of its military by reducing the restrictions of Article 9 is especially important, as tensions in the region remain precarious.

What Does This Mean for The United States?

The United States’ receding hegemony and its deteriorating diplomatic relations with China have amplified the strategic utility of the US-Japan security alliance in the region. Concerns over incoming Prime Minister Suga’s lack of diplomatic experience persist as the US seeks to maintain strong relations with Japan, which were a point of emphasis for Abe. During his tenure as prime minister, Abe made a concerted effort to strengthen ties with the US, notably attempting to foster a personal relationship with President Trump. However, this was met with criticism by many who believed these were fruitless efforts, citing the following instances of diplomatic transgressions by the Trump administration: the aluminum and steel tariffs imposed on Japan, the suggestion that the US quadruple the $2 billion Japan pays for maintaining US troops on the island, and a one-sided trade agreement. This being the case, it is still expected that Suga continues with these efforts of keeping the US engaged as a partner, especially as tensions continue to destabilize the region.

Japan intends to use its alliance with the United States to deter an increasingly aggressive China as it sees Beijing attempting to forcefully change the status quo. For as much as Japan has wanted to increase its defensive capabilities, the fact remains that its resources pale in comparison with China’s, thus leaving it perpetually reliant on the US for security. On the other hand, the United States’ shrinking global hegemony and internal turmoil has heightened its need to balance against a rising China with a strong US-Japan alliance. Japan’s increasing resolve to defend, “every centimeter” of its territory compounded by China’s insatiable thirst for power have raised the ramifications of skirmishes in the East China Sea. Thus, the sudden departure of Prime Minister Abe adds to the volatility within the region as well as concerns over the transitive possibility of an armed conflict between Beijing and Washington.

The sudden departure of Japan’s longest-serving prime minister presents the nation with an additional challenge as it seeks to regain stability after being ravaged by the COVID-19 pandemic. The questions around incoming Prime Minister Suga pertain mostly to his lack of experience as a diplomat within the international community. Suga attempted to quell some of these concerns as a candidate when he ran on a platform of continuity, in which not much would change from the policy objectives laid forth by his predecessor. If this is the case, there is good reason to suspect that tensions with China will in fact worsen before they get better. This is due to the fact that Japan will remain resolved to defend its territory from Chinese encroachment as well as continue Abe’s objective to restore Japanese military capabilities. Additionally, the ever worsening relationship between China and the US has put Japan in a compromising position regarding any potential negotiation with Beijing. This uncertainty is undoubtedly exacerbated by the combination of Abe’s sudden departure and his successor’s glaring lack of diplomatic experience. As is currently the case for many nations, Japan finds itself in the midst of a critical juncture period in its history; the decisions made by the incoming government have significant ramifications for the immediate future as well as for years to come.