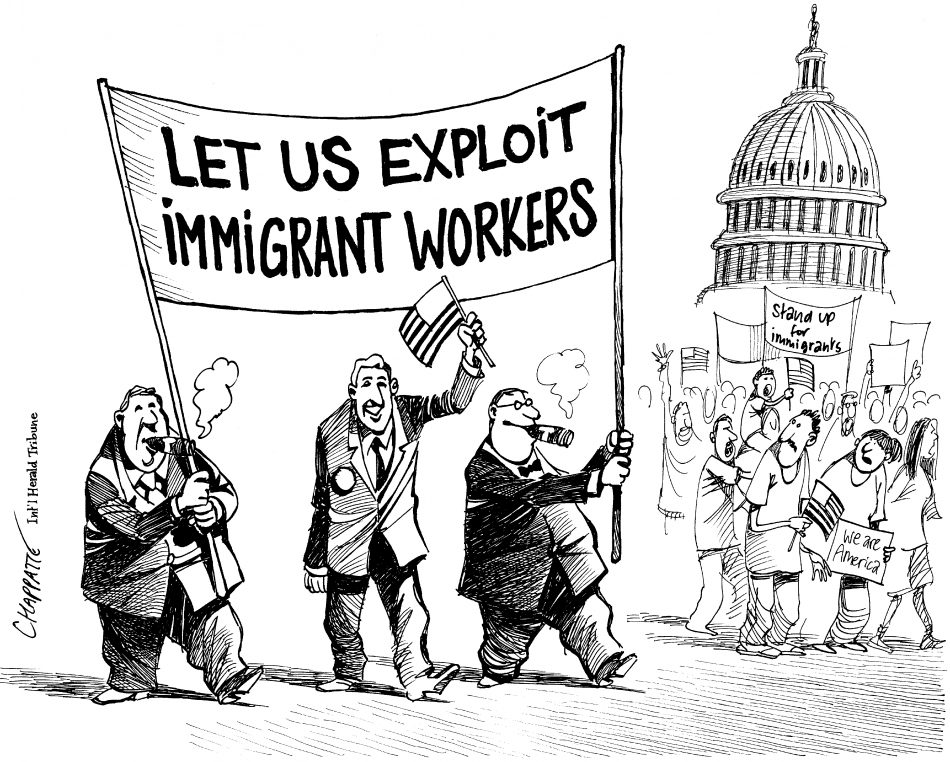 Silicon Valley is an innovation hub of great ethnic diversity today. However, the complexity behind hiring foreign talent is rarely well explained. The Immigration Act of 1990, signed by the H.W. Bush Administration, launched visa programs to help American companies overcome shortages of talents in burgeoning sectors by hiring foreigners as temporary workers. First Lady Melania Trump is an example; she was a fashion model who entered the US through the H-1B visa program and later became a US citizen. In the United States, there are over 580,000 H-1B visa holders, 65 percent of whom work in information technology positions, forming a vital army of innovation and driving the growth of the technology industry. The demand for highly-skilled employees in the tech industry soared in recent years as the field undergoes rapid expansion, but the visa system has struggled to keep up.

The H-1B work visa program requires applicants to have at least a Bachelor’s degree and requires employers to demonstrate a lack of qualified US applicants for the position. After getting the job offer, the process of getting a work visa is broken into two parts: petition and lottery. The petition is the first screen for qualification. In 2019, the USCIS received roughly 420,000 H-1B petition applications, out of which 388,000 were approved and entered into the lottery. However, the lottery system has capped the number of successful issuances of the visa at 65,000 per year — which hasn’t changed since the program’s birth in 1990. In other words, a person has a mere 15 percent chance in 2020 to successfully obtain a work visa.

On top of the increasing competition for visas in the lottery, under the current administration, current and prospective H-1B holders face a wildly uncertain employment future, given the mercurial attitudes from the White House. In his endeavor to adhere to the message “buy American, hire American,” President Trump, in Proclamation 9645, claimed that “existing immigrant visa processing protections are inadequate for recovery from the COVID-19 outbreak.” In a series of proclamations since April 2020, President Trump has extended and expanded the suspension of work visas through the end of the year and outlined his vision of a new visa program. The Trump Administration proposes to reform immigration to a merit-based system, selectively granting visas to those standing on top of the salary pyramid.

The program stirred controversies across the political spectrum and the industry.

President Trump and his campaign leveraged the school of thought that foreign workers hurt American workers and even drafted a reductionist solution to simply suspend foreign work visas. Even some within the GOP disagree with the logic behind it. In May 2020, nine Republican senators wrote a letter to President Trump asking him to not suspend the H-1B, H-2A and H-2B visa programs, making the strong case that the non-immigrant foreign worker community is needed in the post-pandemic recovery. They reminded the president that the nature of the visa programs ensure that foreign workers do not compete unfairly with domestic workers for job vacancies and suggested that the presumption that any unemployed American would qualify or desire to take the jobs guest workers fill is simply whimsical.

Criticism also came from industrial beneficiaries of the program. Amazon slammed the move as “short-sighted.” Tim Cook is ”deeply disappointed by this proclamation.” Google CEO Sundar Pichai — an immigrant himself — dissented on Twitter, saying: “Immigration has contributed immensely to America’s economic success, making it a global leader in tech, and also Google the company it is today.”

Despite agreeing on the notion that bringing brightest minds to the country from across the world would strengthen the American talent pool, Democrats question the nature of the program in its current shape. In a 2014 New York Times article, The Nobel Prize-winning economist Paul Krugman dismissed that idea of the “skills gap”, a shortage of Americans with desired skills, as a “zombie idea”. Krugman argues, “by blaming workers for their own plight, the skills myth shifts attention away from the spectacle of soaring profits and bonuses even as employment and wages stagnate.” Multiple studies have shown that there is no proof to the claim of “skills gap” or “labor shortage” in the United States, rendering the rationale which the entire visa program depends upon fallacious. Perhaps the term “skill shortage” really means a shortage of low wage workers, and “letting the market decide” is only applicable when it serves the tycoon’s cheap interests.

Bernie Sanders shares beliefs with Krugman on the issue of H-1B, considering the work visa program as a manifestation of untamed capitalism in the 2016 presidential campaign, “What right-wing people in this country would love is an open-border policy. Bring in all kinds of people, work for $2 or $3 an hour, that would be great for them … I think we have to do everything we can to create millions of jobs.” Indeed, it has been found that there are legal mechanisms where U.S. employers can legally underpay H-1B workers. The H-1B holders are often in vulnerable positions during negotiations, as they face instantaneous deportation once the work contract terminates. The exploitation of foreigners in this respect is reminiscent of the indentured servitude in the 17th century. 60 percent of H-1B positions certified by the U.S. Department of Labor are assigned wage levels well below the local median wage for the occupation. The DOL has the authority to change it — but it hasn’t.

The program needs to be reformed, just not the way President Trump has envisioned

Sanders also drew attention to a common misconception that the economy and the labor market is a zero-sum game: when someone gets a job, someone else becomes unemployed. The administration’s fixation on cutting the foreign workforce in order to introduce unemployed Americans exemplifies this mindset. Nevertheless, it is worth noting that the sectors with the lion’s share of work visa holders are the fastest growing and have brought millions of jobs to native workers as well. These sectors of the economy, notably the technology industry, have added 2.1 million jobs since the financial crisis, and economists predict bullish trends in the next decade: the US Bureau of Labor Statistics predicted that there will be over 8.8 million more tech jobs available by 2028. In other words, stimulating economic growth and creating more opportunities is central to breaking the current impasse on immigration. And the tremendous growth needs to be powered by more talents from abroad and, hence, more work visa issuance. The cap of 65,000 visa issuance per year needs to be lifted.

Aside from the need for immigrants as new blood for innovation, there is evidence that the visa system is exploited in its current form. The companies who hire the most H-1B workers are not highly innovative tech firms like Apple or Google, but are outsourcing and offshoring tech-consulting companies that most Americans have probably never heard of. For example, the three consulting firms standing on the top of the rank, Tata Consultancy, Infosys Technology, and Cognizant Technologies, are all IT outsourcing companies based in India. IT outsourcing companies, instead of pushing for innovation, perform housekeeping chores like data storage, customers support, and maintenance. These firms are gaming the visa system and exploiting the vulnerable position of foreign workers by paying them salaries that’s much lower than the prevailing salary. A foreign worker is usually paid $40,000 less per year than a natively hired employee. They are also squeezing out American companies in the competition for the valuable head counts in visa petitions. In this regard, perhaps the envisioned merit-based system and increasing the salary threshold for H-1B issuance could help alleviate exploitation, but it would also inhibit small companies from benefiting from the foreign talent pool. More scrutiny is needed in the visa issuance process, to reallocate valuable resources from those who do not deserve it, to more worthy companies.

More protection is needed for the country’s future talents, and efforts to make them feel comfortable calling this country their future home should be expanded. In the current condition, foreigners in this country are always racing against time. An international student has only 30 days after graduation to find a job that meets the criteria, otherwise they face immediate deportation. Even for individuals who have successfully obtained the visa, it will only be valid for 3 years, and the extension is contingent up on variable conditions. Further, the narrative from the Executive Branch is hostile to the international community. US Immigration and Customs Enforcement (ICE) released a new directive saying that international students studying in a remote environment should not stay in the country in June. Though rescinded, the directive still sets the tone for fear and instability in the months to come.

Mainstream media should diversify the narrative surrounding H-1B workers. These workers are here not just to help corporate America generate profit and widen inequality but to contribute to the socio-economic welfare of the country. H-1B workers contribute more than $27.1 billion dollars per year towards Social Security and Medicare benefits that they may not be able to benefit from and invest more than $12 billion into American businesses annually. In the article “Immigration and Entrepreneurship in the United States”, authors Pierre Azoulay, Benjamin Jones, J. Daniel Kim, and Javier Miranda suggest that “immigrants in the U.S. create a lot more jobs than they take, primarily because many are likely to start businesses that go on to create a lot of jobs.” Immigrants launch businesses across the nation, from food trucks to Tesla, which revolutionized the auto industry, pumping over 40,000 jobs and $4.1 billion into California in 2017.

The H-1B program is ambiguously defined and is rooted in the fallacious argument of “skills gap”.  It has been exploited, remains obsolete, and is in need of reformation to ensure that the human resources are optimally allocated. Nevertheless, the decision makers appear to be passive and are scrambling to reach a consensus.