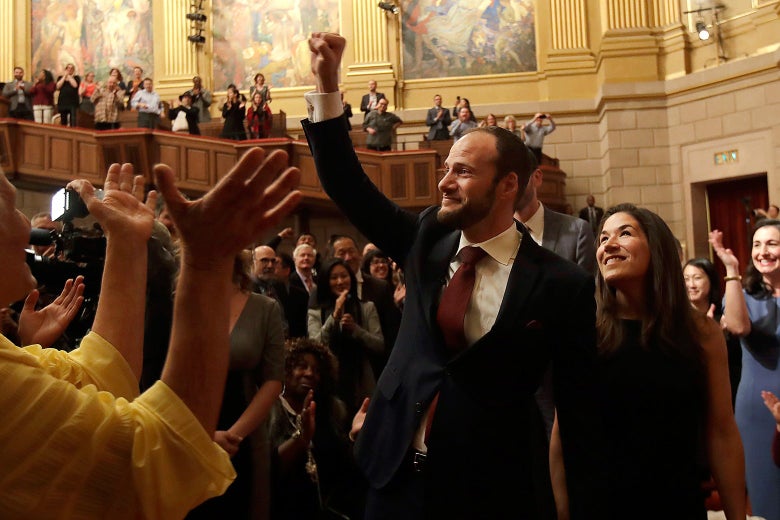 Chesa Boudin, the newly elected San Francisco District Attorney, strikes a chord among many when discussing his experiences with the criminal justice system. Growing up with two incarcerated parents and visiting them behind bars all throughout his life, Boudin was destined to become the activist and leader he is today. He knows the criminal justice system inside and out. Boudin used his family experience to power his career, to always remember why he is a public defender and now district attorney. He speaks on the value of “second chances for those who have made mistakes” and the ideas of “compassion over punishment” with “equal justice for all, regardless of race, gender, sexual orientation and citizenship”. Boudin connects with San Franciscans in a way that has not been seen before by a DA.

Chesa Boudin won on a platform based on restorative justice up against establishment-backed interim district attorney Suzy Loftus. Loftus is a former prosecutor with previously held positions in the sheriff’s department and as Kamala Harris’s Chief of Policy during her DA term. Loftus claims to be “progressive” but has a long history of supporting unjust policies, such as cash bail, laws that criminally charge the parents of truant children, and policies that require handing over undocumented juveniles to ICE.  The Police Officers Association (POA) alone spent over $650,000 on campaign attack ads on Boudin and in support of Loftus. Loftus had the California Democratic establishment behind her too, with endorsements from Governor Gavin Newsom, Senator Kamala Harris and Senator Dianne Feinstein. Despite Loftus’s momentum, Boudin received a powerful endorsement from presidential candidate Senator Bernie Sanders. Sanders’ endorsement helped put the 2019 election on center stage, with progressives around the nation cheering on Boudin and the hopes of bringing an unprecedented and progressive restorative justice system to San Francisco.

District attorneys have significant power locally and nationally. They decide if criminal charges are filed and the severity of those charges. The DA sets the tone for criminal justice systems in their own city and others. The influential power they carry allows them to prioritize and deprioritize how laws are enforced and who they are enforced against. DAs can personally funnel people into the prison system, trapping people and communities into mass incarceration’s revolving door, or they can give second chances.

San Francisco is the 15th most populated city in the United States and has massive political power, making this DA position that much more coveted and influential. Widely-known politicians like California Senator Kamala Harris have also held the same position. What happens in San Francisco serves as an example for other cities, giving the SF DA significant influence on nationwide politics. Chesa Boudin is ready to use this position to give power back to the people and simultaneously weaken the police’s power. He has the chance to reinvent the city’s justice system, with his four year term being just the beginning. Boudin represents a huge shift in comparison to past DAs and will be fascinating to watch as he grows into the position.

Boudin was elected in November of 2019 and was sworn in January 8th. He immediately started making actions to reform the SF justice system once sworn in. Notably, on the 22nd of January, Boudin announced that “his office would end the practice of requiring cash bail as a condition for the pretrial release of defendants from jail” which has again brought national attention to our local politics. Cash bail allows someone who has been arrested to be released from custody based on providing a cash deposit/bond to guarantee that they will appear in court. The movement to abolish cash bail in California has been in the works for years, leading to CA Senate Bill 10 that was set to go into effect fall of 2019 until bail companies fought to get voters to decide on the ballot in the November 2020 election instead.

Hundreds of thousands of people across the US are locked up awaiting trial, not convicted of a crime, because they cannot afford to pay cash bail. These people may wait months, even years stuck in jail awaiting their trial. Money bail originated from the idea that people may not return to court otherwise, but has turned into class-based imprisonment. The POA often argues that cash bail prevents dangerous criminals from running free, reducing the revolving door or recidivism. Yet, as Boudin says, “there is tremendous empirical evidence to show that money bail undermines public safety.”

This system keeps those who cannot afford bail stuck in prison, regardless of their risk to public safety, while allowing potentially dangerous people to buy their freedom. Money can trap people in prison waiting for their court date, while their life on the outside turns to shambles as they will likely lose their job and home, pushing themselves and their family further into poverty. With people of color being disproportionately detained and policed, this system further targets and entraps them in the cycle of mass incarceration and poverty. Boudin argues that “there should not be a price tag on freedom,” which is why he proposes to seek detention based on serious risk, not wealth. Activists and organizers from the Human Rights Watch to fellow criminal justice activists like Tiffany Cabán have praised Boudin for this action. In the scope of the United States criminal justice system, this is a huge step towards progress and reform that we have yet to see elsewhere in the nation.

Another key policy that Boudin is pushing is restorative justice, specifically in his victims-first approach. Restorative justice views crime not just as breaking the law, but as a harm to people and community. It tries to address this harm through healing and accountability, focusing on what the victim wants and holding the person who committed the crime accountable. This process is publicly advancing in New York, and victims are documented as choosing this method in nearly every case when offered. It expands options for victims to heal in a way they feel appropriate while reducing re-traumatization, avoiding the old “one size fits all” approach. The focus is on rehabilitating, not punishing.

Critics of restorative justice say the approach is too lenient and allows crime committers to take advantage. Looking at New York, the evidence would say otherwise. Victims choose this approach for a reason; it works. New York’s program seeks to end cycles of violence and abuse at a community level, decrease incarceration and promote healing using restorative and trauma-informed practices. Each case varies from one another, and for good reason. Restorative Justice aims to allow victims and offenders to explore how everyone was affected by an offense and repair the harm. Those involved can go about it how they see fit. There are countless stories of success from these programs, where victims and crime committers both are surprised by their newfound peace.

Dumping people into the system is the easy and broken old route to a sense of justice and creates a revolving door of mass incarceration. If two-thirds of offenders end up committing another crime, it is not a successful system. The United States’s justice system has been deeply flawed for years and Boudin, among other public figures, are advocating for new routes to create a system truly based on justice.

Just two weeks in, Boudin has accomplished one of his largest campaign promises and has the POA and the for-profit bond industry in uproar, as they see their monopolized power begin to slip through their hands. Already, he is leading the city, state and nation towards fixing the broken criminal justice system. Boudin is sticking to his roots and leading the conversation in real criminal justice reform. His election proves that the American people want real change and are sick of empty promises and broken government institutions. The people voted for a victims-first and focused DA that sees that all crimes do not have a one-size-fits-all solution. San Francisco has historically led the way for progressive reforms, and Boudin’s win is a new step in the right direction.