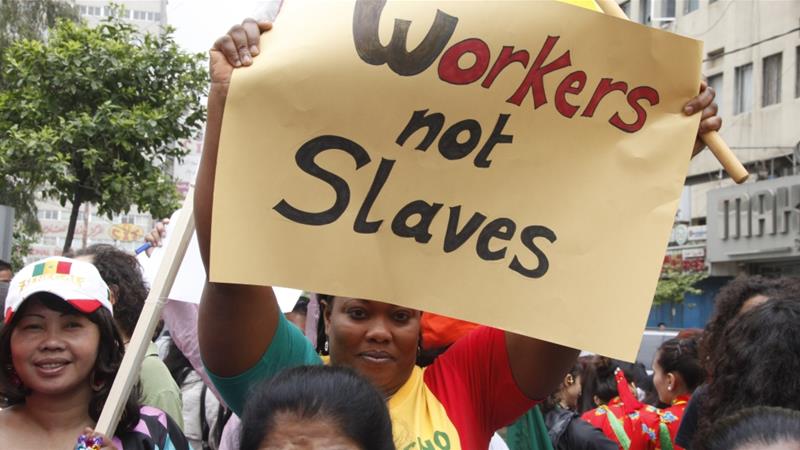 Lakshmi Senthilnathan has spent most of her adult life working in the country of Oman as the sole breadwinner of her family. While telling her story, she breezes past several accounts of physical and sexual abuse, claiming they are not out of the ordinary. Lakshmi persuades the interviewer that she was fortunate, for some of her colleagues were unable to visit their families or faced severe consequences for mild insubordination. She highlights the necessity to continue on in these horrifying conditions — to support her family and provide for a better future for her daughters.

Global outrage has sparked by the absolutely inhuman treatment of some migrant workers. Ariyawathi, a 49-year-old Sri Lankan woman working in the Kingdom of Saudi Arabia, was found with 11 needles and 13 nails pounded into her. Kasthuri Munirathinam, upon complaining about her working conditions, had her right arm chopped off. Joanna Demafelis’ body was found frozen in Kuwait.

In many Middle Eastern and Southeast Asian countries, migrant workers must follow the abusive and demanding Kafala system. Considered modern-day slavery or indentured servitude, migrants to countries such as Lebanon, Qatar, Saudi Arabia, the United Arab Emirates and Malaysia lack basic rights and are forced to live and work in dangerous conditions.

In the most basic form of the Kafala system, migrant workers are required to obtain a national sponsor (a Kafeel) and are only allowed employment with the visa-sponsoring firm. Local citizens or companies are needed to sponsor foreign workers to ensure the validity and credibility of the work permits and residency. So the worker’s right to work is dependent on the company or local citizen that is sponsoring them.

These workers are unable to change their employers, which fosters the opportunity to exploit the relationship. As the migrant is attached to the sponsor, they are unable to switch industries or move through the labor market for the duration of the contract. The worker must get a document from the sponsor to resign and is forced to leave the country upon termination or withdrawal of the contract, which typically lasts 2 to 3 years, before entering a new contract with a different sponsor. Subsequently, the Kafeel benefits from this monopoly on workers and their inability to leave their firm. The benefits to the Kafeel incentivizes the suppression of migrant worker rights.

Employers have a feeling of ownership over the laborers, similar to indentured servitude, and, consequently, migrant workers are subject to abuse, including confiscation and withholding of passports and other important documents, poor working and living conditions, physical abuse, inhumane treatment and refusal of wages. In some Middle Eastern countries such as Qatar, workers proclaim that the contracts they had originally signed in their home countries are torn up upon their arrival.

For those that believe that slavery is a phenomenon of the past, this is a stark reality check. Migrant workers live in next-to-inhospitable conditions, face physical and mental abuse, and are unable to leave. They are stuck in this destructive and unjust system, while simply trying to provide for sons, daughters and elders back home. In light of this, nongovernmental organizations such as Amnesty International and Transient Workers Count Too are at the forefront of the fight to ensure that migrant workers have equal rights and protections. The global community, while making progress, is not all on the same page.

Qatar pushed a law into place that will pursue better conditions for migrant workers, not just in Qatar, but also in origin countries, according to the government. Yet Amnesty International claims that this will change minute details in the system, but leave the basics very much intact. Other rights groups proclaim that workers will still need the consent of the employers to return to their country of origin. Bahrain, another Middle Eastern country with a tragic history of migrant worker abuse, has allowed workers to switch employers and outlawed passport retention. In fact, about 10,000 illegal migrant workers who originally overstayed their work visas were enabled to search for and become employed in temporary jobs, potentially without Kafeels. While this sounds like the perfect solution, it does not apply to domestic workers in Bahrain, which make up the large portion of migrant workers. The law also prohibits work in sectors that require professional degrees, such as engineering.  The United Arab Emirates allowed any employer to be able to renew an employee’s contract, disabling the exploitation through forced commitment.

Without a doubt, countries are taking the correct steps to ameliorate the indentured servitude that is the Kafala system. To strip migrant workers of their ability to return home, live comfortably and work in safe conditions is dehumanizing them. They deserve the same rights as any other worker, any other citizen. Amnesty International, Human Rights Watch and other similar rights groups are pushing legislation against inhumane and unjust treatment as well as advocating on this underreported issue.

Vidhi Prasad
More from The ReviewMore posts in The Review »