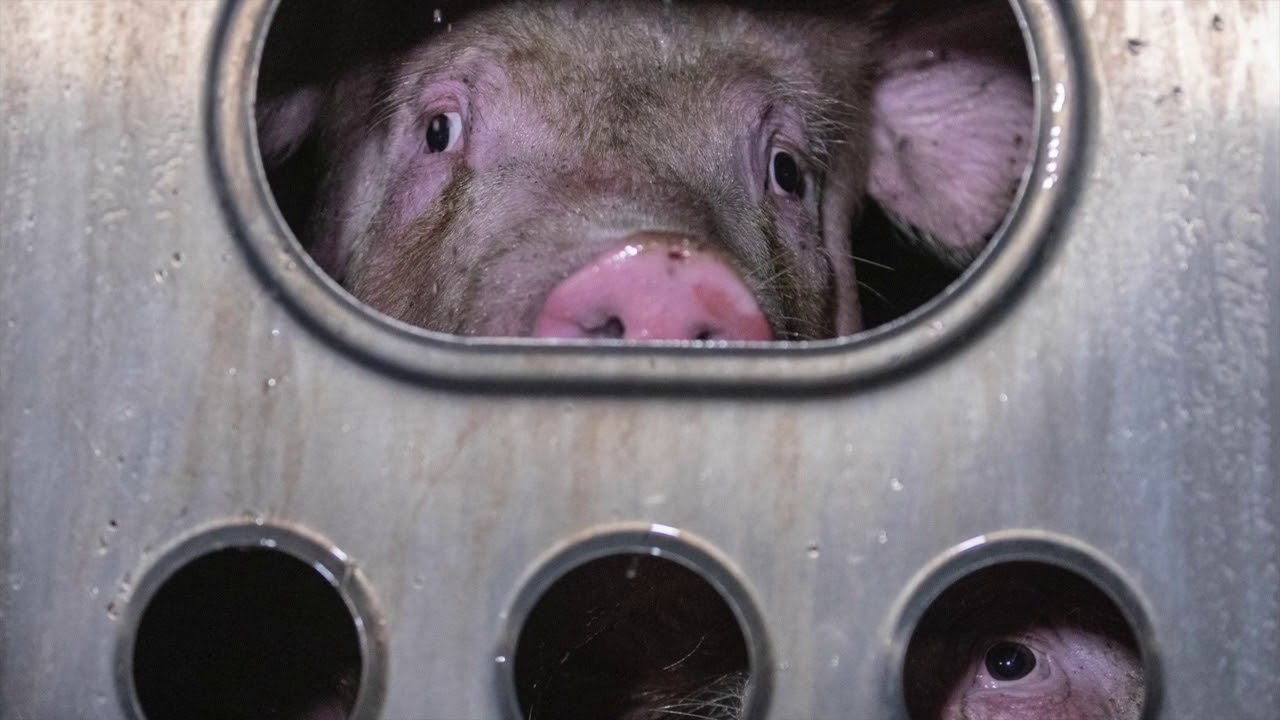 The Truth Behind the Burger

The Inhumane Treatment of Animals Within the Slaughterhouse and Dairy Industries

Every second, thousands of innocents lose their lives in horrific fashions, yet few humans seem to care. The slaughterhouse and dairy industries brutally massacre animals daily, but the carnivorous habits of Americans prompt a lack of empathy for these voiceless creatures.

Who runs the meat and dairy industries?

America’s capitalist society creates an impossibly high standard for the food production industry, as big businesses seek to produce inexpensive and fulfilling food quickly to appeal to the general public. With companies like McDonald’s, IN-N-Out, and other fast-food chains in high demand, the meat and dairy industries work at alarming rates to manufacture the required amount of produce for American burgers and ice cream. Tyson, Cargill, JBS, Nestlé, and other monopolistic giants of these industries normalize the mistreatment of livestock, causing horrific conditions for both the animals and the workers of the slaughterhouses. These corporations lack concern for the unethical practices occurring within their companies; instead, they concern themselves solely with economic profits. The cheap, inhumane methods used for slaughtering animals and harvesting their milk causes unnecessary physical harm to the animals prior to their death, as well as long-lasting emotional trauma to the workers committing the act. As Paul McCartney stated in a People for the Ethical Treatment of Animals (PETA) campaign, “if slaughterhouses had glass walls, everyone would be vegetarian.”

In October of 2019, three million cattle, 55 thousand calves, 12 million hogs and 250 thousand sheep were slaughtered commercially in the United States, according to the U.S. Department of Agriculture. That means that we’re slaughtering over 500,000 animals daily, not including rabbits, chickens or other birds. The Humane Methods of Slaughter Act “requires the proper treatment and humane handling of all food animals slaughtered in USDA inspected slaughter plants.” However, this law does not apply to chickens or other birds and lacks the necessary enforcement to ensure the humane handling of animals while raising, transporting or slaughtering them. Violations of the Humane Methods of Slaughter Act are common, ranging from “brutal prodding and handling to the skinning and boiling of fully conscious individuals.” We are heartlessly harming animals for the benefit of our taste buds, and our carelessness causes ineffable pain and torture in animals’ final moments.

What Happens in a Slaughterhouse?

Within the walls of a slaughterhouse, unspeakable horrors occur. Prior to slaughter, chickens dwell in small cages, cramped together and forced to stand in their excrement, causing the rapid spread of disease. They cannot stretch their wings or move more than mere inches; their miserable lives pan out in disgusting and uninhabitable environments. Selective breeding causes painful physical deformity among these chickens, forcing them to grow at an unnatural rate and causing their fragile legs to break under the pressure of their irregular body mass. Their sensitive beaks are cut at the ends with a hot blade shortly after birth, causing over a month of chronic pain for the young chicks. These normally intelligent and social animals are left to deteriorate in their prison-like cells, with the only hope of escape being their potential for slaughter. In the slaughterhouse, workers hang the chickens haphazardly on a conveyor belt by their feet, only to have their throats slit in a supposedly humane manner. Realistically, as Virgil Butler, a former Tyson slaughterhouse employee, describes, the mishandling of the chickens leads to many left injured and in ghastly pain rather than dying immediately. These ill-fated chickens endure a horrific death in the “scalder,” a pot of boiling water used for feather and hair removal.

Pigs have it even worse. The industry forces breeding sows to produce litter after litter of piglets in tiny, barren stalls, taking away their babies before they can experience any form of love. After sorting the piglets like toys, workers remove any underdeveloped or sick ones –– called “fall behinds,” according to PETA –– and throw them onto the ground, repeatedly beating them on the cold floor until death. These animals endure excruciating pain for the majority of their short lives. The piglets that survive are not as lucky; workers castrate them and cut off their tails and ears without providing any pain killers or numbing agents. All these animals know is pain. Like chickens, these pigs grow unnaturally large at an absurdly fast rate due to hormones and selective breeding, making their small legs buckle under their obesity and creating greater distress, until finally the workers force the pigs out of their cages and into tight trucks, shipping them to the slaughterhouse. Their miserable lives end with their throats slit; some still awake during the process. You can hear the agonizing screams and squeals of these intelligent and kind animals echoing throughout the halls of a slaughterhouse.

What About the Dairy Industry?

While the slaughterhouse industry commits some of the most heinous acts against animals, the dairy industry is no better. Forcibly impregnated through artificial insemination, female cows are repeatedly raped for the dairy industry, with their calves taken from them after birth at just one day old. These calves are then fed with a dairy substitute, void of their mother’s nutritious milk; rather, humans steal this milk for their own benefit. According to the Humane Society, the dairy industry reimpregnates these already weakened cows four months after having previously given birth, placing a “heavy metabolic burden on these animals.” Within those four months –– referred to as the “drying off” period –– the cows recover and prepare for the next birth. However, due to a lack of milking, these female cows can develop painful udder engorgement, causing discomfort and soreness. The dairy industry subjects cows to many other forms of illness, including lameness, mastitis (“inflammation of the mammary gland or udder”), tail-docking (“the partial amputation of up to two-thirds of the tail, typically performed without anesthetic”) and other diminishing body conditions. Typically, cows have a lifespan of about 20 years. In the dairy industry, however, many are sent to the slaughterhouse at the tender age of four or five. These cows are living out their few years in constant pain and fear; they are the victims of a cruel industry seeking to produce mass quantities of milk at unnatural rates. Yet their screams of pain fall upon deaf ears.

Who Works in These Industries?

Not only are the slaughterhouse and dairy industries hurting animals, but they prey on uneducated, poor communities desperate for jobs. According to Virgil Butler, poultry producers seek out rural communities, hiring people ranging from convicted felons and undocumented residents to illiterate laborers who lack access to other jobs. They prey on desperation. With “one of the highest turnover rates of any industrial job in America,” according to Eric Schlosser, author of Fast Food Nation, the constant threat of termination hangs over the heads of the slaughterhouse workers.  If a worker fails to slaughter the proper number of animals per day, others in need of a job can easily take their place. Many workers lose fingertips, entire thumbs or other digits while working in the slaughterhouses, leading to greater amputations and the potential for more health problems from these wounds. The conditions of the slaughterhouses also lead to long-term mental illnesses for their workers. Butler wrote of a man “hauled off to the mental hospital that kept having nightmares that chickens were after him,” noting that these types of dreams are relatively common among workers.

What Can We Do?

While the reality remains that our consumerist society will never fully eradicate the slaughterhouse and dairy industries, we must call for reform for the sake of both the animals and the workers. Individually, we have the opportunity to bring change through reducing consumption of meat and dairy products or even eliminating them from our diets, calling senators and politicians to create laws and reform the industry, signing petitions to investigate slaughterhouses and much more. Through greater regulations and increased safety and wellness checks by the FDA, the slaughterhouse and dairy industries can change for the better. Technology improves daily, and scientists should focus on developing faster, more dependable tools for slaughter, rather than the unpredictable and ineffective machines used currently. The slaughtering process should not focus on killing animals in mass quantities at such a rapid pace; rather, it should worry about ethically slaughtering them. No sentient creature deserves to feel agonizing pain through such inhumane treatment. We must standardize practices and better the conditions animals are kept in prior to slaughter or milking. Furthermore, our lawmakers and politicians must pass legislation to protect workers’ rights and defend workers from injustice. If we improve the resources these slaughterhouse workers have, less animals will be mistreated in the process. All lives within the slaughterhouse matter. We must work from the ground up to achieve reform in this cruel industry. Our society must recognize the injustice we are subjecting these animals to; we must empathize with these lovable animals. Your burger or glass of milk is not worth the suffering of so many innocents.

Juliette is a former writer and editor for the Opinion section and currently serves as one of three Editors in Chief of the Berkeley Political Review. A South Carolina native, she is passionate about social justice reform, climate policy and awareness, and animal rights. Juliette hopes to pursue Classical Archaeology and dreams to work in Herculaneum.