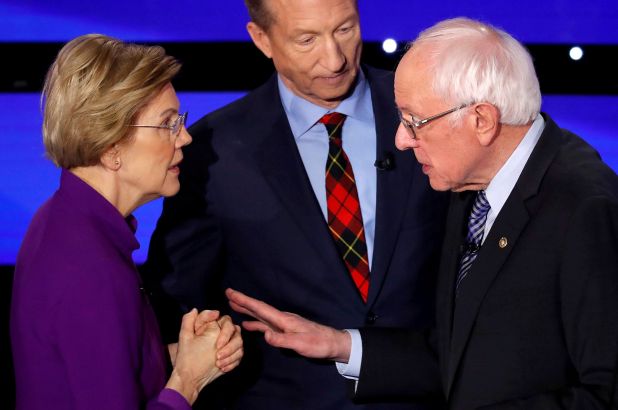 Elizabeth Warren Is No Savior of the Left

The Democratic Primaries are finally underway, and with several candidates beginning to drop out, the rough outline of the top candidates has become increasingly clear. Joe Biden, who before was the clear front runner, is now closely followed by the progressive vanguard of Bernie Sanders and Elizabeth Warren, in what seems to be a lock-step tit-for-tat.

Many struggle to differentiate between Sanders and Warren; they are both socially progressive and supporters of more leftist economic policies and thus have been lumped into the same “progressive” candidate camp. Many look to Warren to unite more left-leaning voters with some of the party’s more moderate contingent in order to hopefully appeal as a kind of Bernie-lite.

But when subjected to scrutiny, it’s not entirely clear whether Warren actually lives up to this label of being a true “progressive.” Warren’s campaign seems destined to fall into the trap of trying to appeal to everyone only to end up pleasing no one; this game of straddling the line between true progressive policy and the more moderate side of the Democratic party is a perilous venture, and one that should leave many voters skeptical of whether Warren actually has what it takes to take down Donald Trump.

It’s important to preface this by saying that the coming election may very well be the most important election of our lives. With climate change looming ominously, class and race tensions reaching new heights and an incumbent President who is the most dangerous to our democracy in modern history, it is absolutely crucial that the Democratic nominee who challenges Trump is the right choice. So although Warren’s policy in any number of other election years would be incredibly promising to progressive voters, as a result of who the Democratic nominee will be up against and the coming intersectional climax of racial, class, and environmental tensions, it is incredibly important that we do our utmost diligence in anticipation of this election.

One pressing concern is the Senator’s past. Warren, up until 1996, was a registered Republican, and described as a “diehard conservative” by her friends at the time. Despite her claims that she wasn’t political in those years, Warren gave a speech for the Federalist Society in 1991, a conservative organization that had previously come out in favor of overturning Roe v Wade. Later in the 1990s, Warren worked as a consultant for the defense of the corporation Dow Chemicals in order to advise them on how best to limit “liabilities” and “the size of payouts” to women who had been diagnosed with breast cancer due to the company’s erroneous implementation of silicone breast implants.

These past excursions and their subsequent flip-flopping are certain to raise eyebrows amongst voters. That is not to say that it’s implausible that Warren has simply changed her mind on these issues, but one has to wonder: should we really be running a candidate who will have to constantly apologize for all their past transgressions? The problem is only compounded by having Bernie, who walked with Martin Luther King in the 1960s and has been a champion of LGBT rights since back when it was incredibly unpopular politically, as a foil as her main opponent in the Primaries. For example, in 1983, Bernie Sanders as Mayor of Burlington backed the city’s first gay pride parade and signed a Gay Pride Day proclamation in a political climate incredibly hostile to such sentiments. On the other hand, in 1983 Elizabeth Warren had just come off of voting for a Reagan administration who had been on record as laughing at the AIDS epidemic because it was just a “gay plague.”

Furthermore, Warren talks a big game on her progressive values, but when holding these to the light, cracks begin to show. For instance, take Warren’s stance on SuperPACs; Warren has already admitted that though she has pledged to forgo SuperPAC in the Democratic primaries, she will accept their aid during the General Election. For progressives who have seen SuperPACs serve for years as the primary tool of financial corruption of our politics, this serves as something of a foreboding warning which raises the question of whether Warren’s policies should be trusted or not, considering the long history of Democratic candidates making lofty promises only to flip after they receive some wooing mega-donation.

But this is indicative of the fundamental problem with Warren: she is not willing to take a stand. The signs are imprinted everywhere across her past actions. Warren was strangely silent on the Dakota Access Pipeline, an incredibly disingenuous display after she touted her 1/64th Native-American genetics as a political ploy. Warren refused to endorse Bernie, her fellow “progressive” cohort, during the 2016 primaries against Hillary Clinton in a move that has amounted to nothing but failed political calculus. When the billionaire class is already beginning to lament these ideas of economic reform, Warren is already tripping over herself in order to kowtow to them. Warren walked back her claims that she would abolish ICE, which at this point has essentially become little more than a glorified deportation secret police.

This seems to be a part of a broader pattern, one in which Warren is piece by piece abandoning her more leftist stances in order to position herself more moderately in time for the General Election. One need only to look at Warren’s stance on Medicare For All, which she, after remaining vague on her stance for some time, has now already balked on. In a country where 34 million Americans watched someone they love die because they could not afford healthcare costs, Warren now says that she will not implement Medicare for All until her third year in office — instead, adopting to transition first through “opt-in” policies which are more in line with more moderate candidates like Pete Buttigieg and Joe Biden. Obviously a comprehensive Medicare for All plan will need a transitionary period, but Warren’s plan to split it into two bills is almost certainly doomed to fail, with each additional stage added to the process fostering more opportunities for Republicans to mount and invigorate opposition.

It’s not entirely clear what purpose this self-imposed compromise is supposed to serve. What is the point of folding before the battle has even begun? Up until this point Warren has been unapologetically left of every candidate save Bernie, only to suddenly walk back her stance on Medicare for All, which seems to do little else but sabotage her own campaign. Moderates who were leaning towards Buttigieg and Biden on this issue certainly won’t flip, as they don’t want Medicare for All in the first place, and this will only further alienate progressives; so, what is the purpose here? To show Republican opposition how craven and easily swayed her presidency would be?

Pragmatically, it is this that is the crux of Warren’s electability problems. Trump’s base at this point is almost completely entrenched; the key to winning this election will not be in pandering to the opposition (as it would seem the Warren’s campaign believes it is) in order to try and flip voters, it will be in mobilizing the astoundingly large sum of people who ordinarily do not vote. Only 55.7 percent of Americans actually cast a vote at the ballot box last election; 34 percent of these non-voters are under the age of thirty and almost half of are low-income and non-white. What’s more is that of those who voted in 2016, 1.7 million people cast a vote for no candidate at all.

In order to rejuvenate these alienated low-income and minority non-voters and the apathetic voters who cast votes for non-candidates, a candidate will have to make a stand for something. The strategy of Obama and Clinton-era moderatism and vague platitudes to try and straddle the line and please everyone simply will not suffice any more; the 2016 Election should be all the proof one needs of this. Endorsing real, profound, structural change that will affect the lives of these low-income non-voters who the American system is currently failing will galvanize them to vote; walking back and waffling on half-baked promises will not.

As elections grow closer, the questions facing Warren’s campaign will only grow louder. Now is the time for progressive America to look at itself deeply and consider: is this really the right choice?