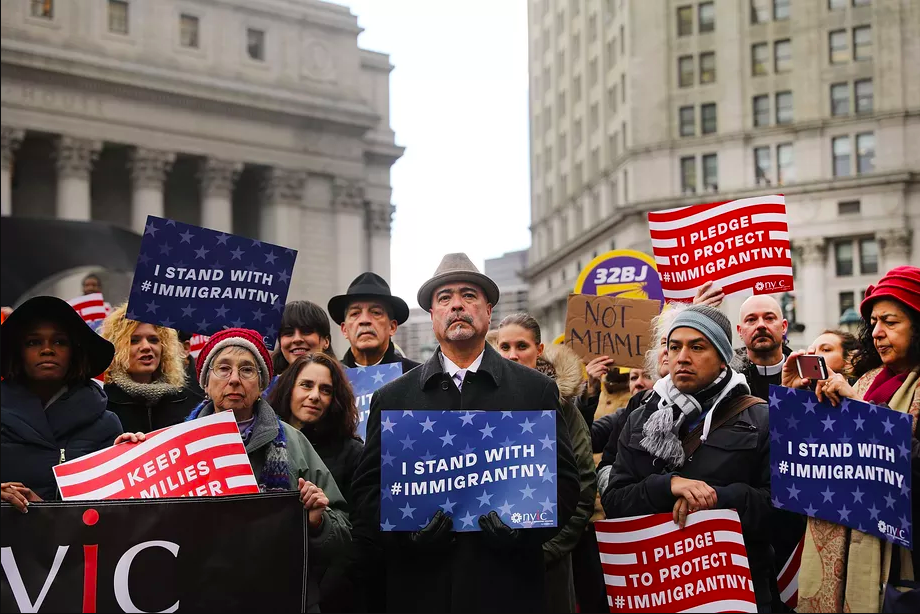 “Sanctuary” Cities are rapidly becoming the new favorite punching bag for the US right wing, seen most notably with Trump attacking them in his 2020 State of the Union. In his brief stint as Attorney General, Jeff Sessions argued, “So-called ‘sanctuary’ policies make all of us less safe because they intentionally undermine our laws and protect illegal aliens who have committed crimes.” Republicans describe sanctuary cities as hotbeds of crime that protect criminal immigrants at any cost, but even Sanctuary Cities’ defenders tend to paint them – inaccurately — as a powerful means of protecting immigrant populations.  In reality, despite consistent fear-mongering and intense politicization, sanctuary cities are quite simply a practical measure that reduces crime by allowing anyone — citizen or undocumented — to feel safe when cooperating with the police to report crimes.

What is a “Sanctuary City”?

“Sanctuary City” is a colloquial term, not a legal one.  The term originated in Berkeley in 1971, and since then, many other jurisdictions have adopted the same label. Often, the term refers to any city or jurisdiction that does not accept I-247D forms from Immigration and Customs Enforcement (ICE). These forms request that the local law enforcement hold an arrested person for 48 hours after they would otherwise be released — after they have already served their complete sentence, posted bail, or paid a fine — so that immigration officers can decide whether or not they would like to pick the person up for deportation.  Sanctuary cities hold people, undocumented or otherwise, for as long as the arrest would normally warrant, not longer.

Krsna Avila, an attorney working for the Immigrant Legal Rights Center (ILRC), told the Berkeley Political Review that “sanctuary policies are mostly about not having double punishment” for the same crime and avoiding people being “transferred over to the civil immigration system” after serving their full sentence to be “punished again.”

Some Sanctuary Cities, like San Francisco, also bar their officers from asking people about their immigration status. This rule does not aid people who are actually arrested and fingerprinted. The rule does protect people who are interacting with the police in other capacities, including as witnesses to or victims of a crime or as part of a routine traffic stop. Houston Police Chief Art Acevedo expressed his frustration at the misconceptions surrounding sanctuary cities, noting, “The idea that there are police departments giving sanctuary to violent criminals is ridiculous. I don’t know any police department that does that.”

Sanctuary cities, like all cities, are already required to cooperate with ICE in some capacity. Sanctuary cities share fingerprints with the FBI and Department of Homeland Security (DHS) to check immigration status and frequently work with ICE to crack down on human trafficking and gang activity.

However, while nearly all cities do cooperate with ICE more extensively for certain cases — such as human trafficking — federal law requires only very minimal collaboration between the police and ICE.  Section 1373 of Chapter 8 of the US Code requires state and local governments to allow their employees to share “information pertaining to the immigration status, legal or illegal, of an individual.”  Multiple court decisions have upheld the narrow nature of Section 1373: local jurisdiction must share immigration status of arrested individuals, but they do not need to provide any further information, hold them for any longer than mandated by law or question witnesses and people not under arrest about their immigration status.

What does the Federal Government Want Changed?

Sessions announced his intent to sue California for becoming a sanctuary state, claiming “We are simply asking California and other sanctuary jurisdictions to stop actively obstructing federal law enforcement.”

However, in many locations, the police legally cannot hold people past their release date for any reason, and refusing ICE’s I-247D requests simply avoids liability for the police.  Police departments who hold people past their release date — even at ICE’s request — can be liable for prosecution and civil fines. In Galarza v. Szalcyzk, a police department held a man for three additional days after he posted bail at ICE’s request, even though he had a driver’s license and a social security card proving he was born in New Jersey.  The police only released him once ICE verified he was a citizen.  He sued and settled for $150,000 in damages.

Sessions and Republicans like him claim “We are not asking California [police], Oakland [police], or anyone else to enforce immigration laws,” but Texas reveals a far more ominous truth: Texas lawmakers have given individual police officers carte blanche to ask anyone about their immigration status.;  Police officers can now ask a person pulled over for a routine traffic stop, a survivor reporting a crime, a witness coming forward to help solve a case or anyone else about their immigration status.  They are, essentially, starting to moonlight as ICE agents. No law in Austin specifically forbids ICE from co-opting these resources, so people targeted have little recourse. The Austin police chief, Chief Manley responded to the new law with dismay, arguing “every officer that spends time working on immigration matters is one less officer investigating serious crimes,” and “right now, it seems like we could be going door to door with ICE to round up individuals.”

“Immigration is a federal responsibility,” Avila from the ILRC explained, “this shouldn’t fall on local communities.”

Living in the US while undocumented is a civil violation, not a crime. Maryland Attorney General Brian Frosh compared it to tax violators, saying “we don’t go after people who don’t pay their taxes on time, and we don’t enforce EPA regulations, so it’s the same thing with immigration.  Immigration has always been a federal responsibility, and we don’t have the expertise or resources for that.”

Why Are Sanctuary Cities Useful?

When asked about sanctuary cities, Montgomery County MD Police Lt. Peter Davidov referenced a shooting that occurred in March 2012, noting that the only two witnesses to the crime were day laborers who he suspected were undocumented.  The day laborers provided police with the murderer’s license plate, enabling police to arrest the murderer; Davidov noted, but, “If those people had been afraid to talk to police, that would have been a danger to public safety.”

Many police officers across the nation share Davidov’s belief that collaborating with ICE to try to track down and arrest undocumented people will ultimately make their jobs harder.  The Major Cities Chiefs Association, on behalf of the 68 largest Law Enforcement Agencies in the US, said that requiring local police to work closely with ICE “would result in increased crime against immigrants and in the broader community, create a class of silent victims and eliminate the potential for assistance from immigrants in solving crimes or preventing future terroristic attacks.”  The International Association of Chiefs of Police also argued that “state and local law enforcement should not be involved in the enforcement of civil immigration laws since such involvement would likely have a chilling effect on both legal and illegal aliens reporting criminal activity or assisting police in criminal investigations.”

Austin Police Chief Bran Manley expressed a similar concern, worrying, “Criminals understand that [immigrants are afraid to report crimes to police and less likely to serve as witnesses in non-sanctuary cities] and will feel emboldened to commit crimes against the immigrant community without fear of being held accountable because they won’t call police.  It creates a haven for crime.” Avila, attorney for ILRC, agreed with police, saying that after Orange County, CA adopted a sanctuary policy, “it’s clear we do see now that folks — immigrants — who were victims of domestic violence” are “now more comfortable coming forward.”

People released under sanctuary law are not violent criminals.  Violent criminals — citizen or otherwise — serve full, sometimes life sentences. Under sanctuary law, undocumented immigrants are released after serving the same sentence that would be given to a citizen.  An undocumented murderer or other threat to society wouldn’t get immediately released under sanctuary policy, just like citizens who are murderers or threats to society aren’t released without serving decades in prison.

Sanctuary cities also save the government money by reducing reliance on social safety nets. The percentage of households in sanctuary cities getting food stamps is 2.6 percent lower; the percentage of households receiving SSI is 0.9 percent lower; and the number of children under the age of 18 living in homes receiving public assistance is 4.9 percent fewer.  Wong, who conducted the study, explained the difference by saying, “If you deport the breadwinner [of an immigrant family], that leaves families more economically vulnerable. That means that these economically vulnerable families are more reliant on public assistance.” Avila, attorney for the ILRC, noted improvements to community’s internal safety nets, explaining, “money that was being used to help ICE is now being funneled back into our communities.”

Politics has warped sanctuary cities into a contentious proposition, but in reality, they are nothing more than a simple common-sense proposition to protect the people in any given jurisdiction and allow the police to continue to do their jobs to the best of their ability. We don’t demand that firefighters interrogate people about their immigration status. They’re there to put out a fire, not to act as ICE agents, and if a significant portion of the population was afraid to call them, that group and anyone living near them would be at risk from out-of-control fires. The police should “protect and serve”: people being scared to talk to police endangers everyone.