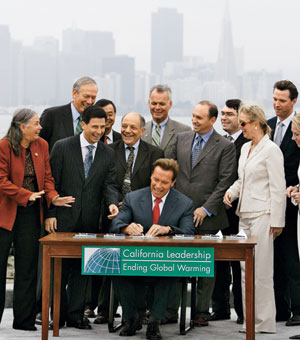 No matter what we do, we’re going to feel the effects of climate change. How bad these effects will be depends heavily on our mitigation efforts. Reducing our carbon emissions and investing in carbon reduction efforts are effective ways to prevent much of the worst effects, but cannot ensure the world will be unaffected. California will be particularly vulnerable to these effects, with the state encompassing both a heavily agricultural and drought-prone region and a large, heavily-populated coastline. Ensuring adequate water and energy distribution, economic prosperity and robust transportation systems in the face of climate change is a growing challenge to California’s continued prosperity. The magnitude of this challenge, however, is almost entirely unknown.

On January 9th, the Legislative Analyst’s office released a report detailing the state of California’s vulnerability to climate change. The big takeaway from the report? We have almost no idea where and how California will be damaged by climate change, but it will be catastrophic. The state of California alone owns billions of dollars worth of property and provides crucial services to millions of residents. Billions of dollars worth of beachfront property could be destroyed, including major universities like UC Santa Barbara, CSU Long Beach, and others. Wildfires meanwhile menace other universities, from Berkeley to Santa Barbara (yes, again), to Santa Cruz and beyond. The hundreds of miles of canals and aqueducts, and the dams and reservoirs that feed them, meanwhile, are at risk of damage from flooding or depletion from drought, potentially destroying the Central Valley’s access to clean drinking water and irrigated land. We’ve seen these effects before from the Oroville Dam to certain vulnerable communities in the San Joaquin Valley still without access to water several years after our record-setting drought ended.

We know that wildfire, drought, storms and flooding will all get worse as the century goes on. What we don’t know is how exactly our infrastructure will be affected. The agencies in charge of these sectors have in many cases yet to complete vulnerability assessments. These assessments are a fairly simple concept; completing them entails identifying (or assessing) vulnerabilities in our state infrastructure and identifying strategies for increasing our resilience. Logistically, of course, it is a complex task, but one that must be undertaken, and the sooner the better. Already, the Department of Water Resources (DWR) and the Department of Transportation (CalTrans) have completed long-term planning assessments, but these two agencies are by no means the rule. Twenty other state agencies have completed short-term assessments which partially cover climate change effects but do not go into the necessary level of focus to identify and enact specific protections. And several crucial organizations, including the Department of Fire and Fire Prevention (CalFire) and the entire Judicial Branch (which oversees our state prisons housing 115,000 people), have completed no assessments whatsoever.

Of California’s 38 state universities, UC Berkeley is the only one to have completed a vulnerability assessment, and it is particularly illustrative of the issues all of California will face. Two particularly interesting challenges to adopting mitigation strategies are the lack of clear funding and the required inter-agency cooperation. When California is in a recession, the first and/or hardest targets of budget cuts are our higher education institutions, and with an uncertain economic future, especially with the economic costs of climate change, funding is by no means guaranteed to secure our campuses. And as any Berkeley student remembers, even if Berkeley is secured from wildfire, PG&E may still be forced to cut our power, necessitating deep cooperation to ensure both our campus and our campus’ underlying infrastructure are secure.

The most critical and clear first step to addressing these issues is to actually mandate a comprehensive, statewide assessment of our infrastructure’s vulnerability to climate change. This is obviously difficult as we must account not only for the complex network of state services but also for the varying projections of the impacts of climate change. The sooner these assessments are done, however, the more effective we will be at avoiding the effects. Without understanding what exactly climate change will cost us, we won’t know how much we can reasonably budget to both prevention and mitigation strategies. And the sooner we know the costs, the longer we have to prepare for the most devastating end-of-century impacts.

There are completely valid reasons to be concerned about mandating these assessments. Logistically, each governmental organization making these reports must use the latest models of climate change impacts to identify particularly vulnerable areas and then identify strategies to reduce the risk. Crucially, many of these areas will require inter-agency cooperation or even cooperation with private actors, which will only slow down the process and make the desired outcome more difficult to achieve. And as previously mentioned, the uncertain funding future for California, coupled with the high cost of retrofitting and repairing much of our public infrastructure, may make the cost of these projects prohibitively expensive. It is a difficult, long, and potentially very expensive process, but nevertheless, the cost of avoiding these assessments is something we cannot afford. Harsh as it sounds, California itself has very little control over the pace of climate change. Our total emissions are less than 1 percent of the global total, and besides being able to demonstrate proof-of-concept for climate policies, we cannot affect the greater emission trend. Therefore, even as we work to demonstrate effective climate policies, we must prepare for the growing possibility that the world may not take enough action on climate change until it is far too late. The growing trend of anti-establishmentarianism and right-wing authoritarianism worldwide, from the US to Australia, has been fanning the flames of climate denial, which is fueled by a heavy dose of fossil fuel industry donations. We must be prepared for the possibility that no matter what we do, we will see the worst effects of climate change before the century ends. We must be prepared for this eventuality, and the only way to protect our citizens is to know exactly what is threatening us. Protecting California from climate change without these assessments is like trying to study for a final off the course description. And if you fail this final, you have a good shot at spontaneously combusting.

Josh is a staff writer for the California section. He's studying environmental policy and Rhetoric. In a normal year, you could find him hiking the fire trails, biking around Berkeley, or playing jugger on Memorial Glade. He hopes to use his education to make a difference in this world.