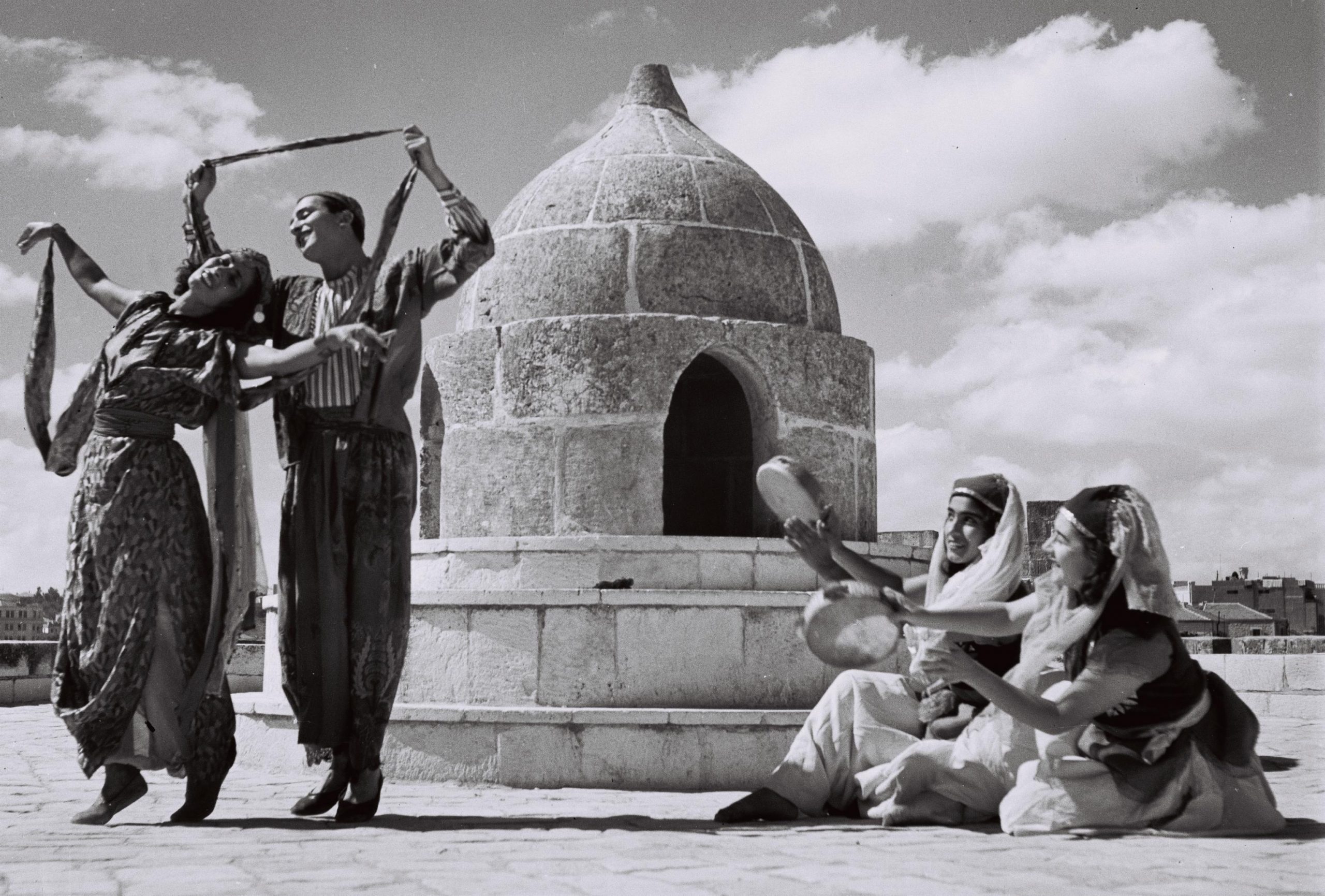 Driving by car, the entire State of Israel is less than six hours tip to tip. The world outside the window changes from barren desert to sudden, massive artificial forests, erected through donations by millions abroad who have “planted a tree in Israel” for fun, as a birthday gift, or for some other celebration; and Kibbutzim, agriculturally or industrially-based communes, some of which had been established at the beginning of the twentieth century. You might pass a camp of Bedouins, Islamic nomads who have herded goat and camel throughout the Negev and greater Arab region for centuries. Ancient structures, temples and monuments will pass, thousands of years of empires left blowing away in the dry wind. Undoubtedly, you will pass bus stations, playgrounds and other public structures designed as dual-purpose bomb shelters. Underground, and required in every home, are more shelters to ensure no one is ever further than ten seconds from protection; When the siren wails, citizens in some areas have less than that amount of time to reach safety before rockets land.

It is impossible and insensible to search for a villain in the Israeli-Palestinian conflict. The problem is a system which requires maintenance. Since Israel’s founding, that maintenance has left much to yearn for. Treaties and peace processes have been carried out and dropped, international players have dipped too many toes in and eighty years have gone byy without any indication of long-term solutions. President Trump’s recent “Peace to Prosperity” plan has earned the United States the name of “enemies of peace” by global protesters. To its credit, the plan is, in truth, indicative of the global ties to the conflict. Understanding the context, contemporary approaches and potential future climate is difficult due to such polarity, but trying to understand and remove personal bias is important in creating global community support in resolving such an internationally significant conflict.

In modern history, prior to the British mandate for Palestine, the land from the Mediterranean sea to the Jordan river was colloquially referred to as the Palestinian region. The mandate was established in 1923 with the intent to develop a Jewish state and homeland. Since 1947 (Israel was established as an independent state in 1948), an excess of plans has been proposed to partition the land into sovereign countries: Israel and Palestine. They have been rejected, transgressed and ignored. The land currently under control of the Palestinian Authority (PA) is a point of significant tension; The West Bank, adjacent to Jerusalem and the Temple Mount – among the holiest of sites for Jews, Muslims, and Christians alike – was originally occupied by Jordan, who annexed the region in 1950. It has since been partitioned into three parts: an area controlled by the Palestinian Authority, one controlled by Israel, and one joint Israeli-Palestinian run region. Internationally, the whole portion of the West Bank is recognized as under occupation by Israel, who retains security authority over the entire area. The Israeli argument has persisted that the region is disputed land, the status of which must be determined through negotiations. There have been numerous allegations of misconduct and human rights violations on the part of the Israeli Defense Force. Response from the Israeli government has been, to generalize, that the violence is justified by Israel’s extreme vulnerability to attacks. That is, leaving a spot open to exploitation by radicals will almost certainly be exploited by said radicals.

Gaza, between the border of Israel and Egypt, has been under effective control by the terrorist organization Hamas since 2006. Hamas diverged from the Palestinian Authority in 1988 over the P.A.’s formal recognition of Israel as a state. Its radical approach has been the direct cause of innumerous suicide bombings, rocket attacks and “terror tunnels.” In 2018, massive protests at the border with Israel allowed Hamas to incite excessive violence, throwing molotov cocktails, rolling burning tires, and sending incendiary kites towards the border. One year prior, Hamas released its proposal for a state of Palestine. The plan is uncompromising to the extreme, not only rejecting the right to a Zionist state but completely denying the fact of Jewish heritage to the region.

Here it becomes important to note religious charge on the conflict. A major proponent of an original plan to found a Jewish State – the Zionist movement’s main aim – was in response to recognized anti-Semitism internationally. The Holocaust, and subsequently World War II, instilled in the Jewish mind a necessity for a legally ensured safe-haven which all Jews could call their homeland. Millennia-old Judaic monuments prove an ancient connection to the land. The Temple Mount, or Western Wall, in Jerusalem, is the holiest place in the world to the Jewish tradition. This is also where, according to Islamic tradition, Mohammad made his ascent to heaven. This temple is considered by Sunni Muslims to be the third holiest site in Islam. A short walk towards the Christian quarter of the Old City of Jerusalem leads to the Church of the Holy Sepulchre, perhaps the holiest of sites in Christianity and the endpoint of many pilgrimages. To the Christian tradition, this is the site of Jesus’ crucifixion, burial and resurrection. For thousands of years, the greater Palestinian region has exchanged hands between the three major religions, most often by force. Accordingly, the two factions without power have often been suppressed in some way or another. Religious tension is constantly high-strung, but the current system seems to sit acceptably. Today, Jews are not allowed to pray on top of the Temple Mount; it is restricted to Muslim prayer. To enter the complex of the Western Wall, heavy security checks are required and rules specific to dress code, gender-separation and more are maintained by the Orthodox Rabbinate. The Christian community has use of its historical sites, and the Israeli government provides security and maintenance to all the locations.

The Israeli government, however, is almost exclusively Jewish. Supporters of this balance argue Israel is the recognized and delivered Jewish state, and should thus be run by the Jews. But with such little political negotiating power, it is no wonder the P.A. has been hesitant to approach the table. Since Trump’s recognition of Jerusalem as the capital of Israel, his administration has been largely boycotted by the Palestinians. Electing to remove themselves from President Trump’s peace process entirely, however, is a clear explanation for such bias in the resulting plan.

President Trump’s Middle East peace plan has, to varying degrees, been rejected by most of the international community: the African and European Unions, the Arab Union, and possibly the United Nations soon (though barring an almost certain veto by the United States). Outcry for the plan’s violations of U.N. Security Council resolutions is valid, and the plan also includes widely unreasonable policies. Complaints regarding a lack of foreign consultation are unwarranted, however, as many state actors were invited to participate throughout the process.

Politico reports on the broader impact Trump’s policy towards Israel-Palestine relations has had and will have on domestic and international attitude toward the conflict. Trump’s explicit, often policy-overturning, support for Israel’s development in the Palestinian region will be difficult for any future U.S. leader to repeal. A strong pressure to engage with the U.S. is also enough for reverberating effects in other countries’ policies, as seen after Trump’s recognition of Jerusalem as the capital of Israel and Israel’s sovereignty over the Golan Heights. Further, the polarizing platform Trump built has perhaps burnt bridges that are difficult to erect. Egypt, Saudi Arabia and Jordan all remained absent at the rollout of the peace plan, indication of non-support for the method of pressure Trump has employed.

The Peace to Prosperity plan provides both carrot and stick for Palestinians. An included map of the vision for partition is, to some, insulting. The United Nations sticks by support for 1967 borders in any agreement, yet the Trump plan essentially green-lights annexing an entire region of the West Bank. Demilitarization of the entire proposed State of Palestine is stipulated. But also included is the promise of billions of dollars in economic investment for development in economy, tourism, healthcare, infrastructure and more. The religious sites’ policies surrounding prayer and maintenance remain unchanged, allowing the Muslim community to continue their control of the Temple Mount, the Jewish community continued facilitation of the Western Wall, and the Christian community its use of the Church of the Holy Sepulchre, a system that has worked thus far. There is a clear business approach to the plan and a clear presence Trump’s hand guiding trade incentives for many policies. This is no more than a starting point, but Trump has made any movement from here difficult after cutting aid, moving the embassy, and showing additional explicit bias. To move forward, everyone treating each other with more respect just might help.

Since the peace plan’s release, tangible responses have been violent and recursive: the New York Times reports rocket fire, firebomb and stone throwing, car ramming and mortar attacks have emanated from throughout the West Bank and Gaza. In turn, Israeli Defense Forces have shot down assailants and launched air attacks on Hamas strongholds. Tensions have only flared higher since the attempted stepping stone towards peace. This is no way to make progress. While nobody may be entirely happy with Trump’s proposal, it can be manipulated, with time, to form a realistic plan for the current state of affairs. Six million Jews and two million Arabs live within the borders of the State of Israel today. Vehemently opposing a compromise of some sort is ignorant to the facts on the ground, as neither group is truly capable of getting up and leaving. So, peace talks are most pragmatic in strengthening the entire Palestinian region. This means talking. Many anti-Israel groups, including some on our campus, have adopted “anti-normalization” policies, refusing to speak with supporters of Israel to prevent basic validation of their beliefs and their ensuing right to an opinion. Anti-normalization is antithetical to reality; the only proven consequence is a continued, drawn out conflict. Uncompromising stances are ignorant of the plight of the humans in Israel and Palestine, siding with bureaucracy over legitimate advocacy and action. To reach a solution that those in the Israeli-Palestinian region and those abroad with cultural or other ties to the land, feel comfortable with, everyone needs the utmost of humility and should start to approach conversations with respect for other’s opinions on the matter. Peace is, in fact, the path to prosperity. We could all benefit from looking each other in the eyes and shaking hands instead of exchanging hostile tweets and illegitimate allegations; follow the ideals of the prophet Isaiah (who appears in literature of the three major religions): “He shall judge between the nations, and shall arbitrate for many peoples; they shall beat their swords into plowshares, and their spears into pruning hooks; nation shall not lift up sword against nation, neither shall they learn war any more.”