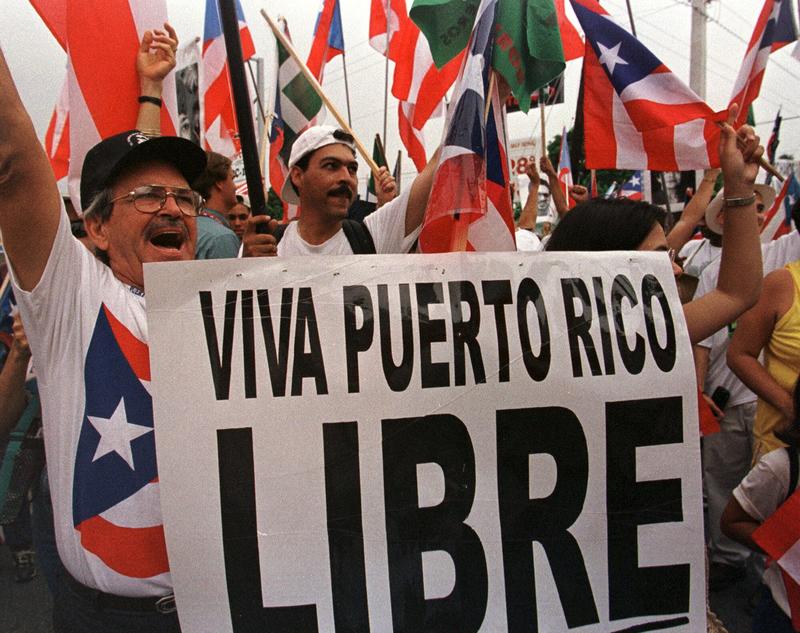 “TAXATION WITHOUT REPRESENTATION.” The three-word political slogan at the forefront of the American Revolution and the foundation of our “democratic-republic.” Although the history of “taxation without representation” seems ancient and distant, for Puerto Ricans, it’s a political reality.

Many Americans are unaware or confused about what Puerto Rico is in relation to the United States. According to a national tracking poll conducted in 2017, only 54 percent of Americans surveyed knew that Puerto Ricans are U.S. citizens. They hold U.S. passports, they can travel in, out and throughout the 50 states without a problem, they use the U.S. dollar and they even pay Medicare and Social Security taxes. What stops Americans from immediately recognizing Puerto Ricans as Americans, however, is the Puerto Ricans’ lack of federal representation. Their sliver of representation is through the democratically elected “resident commissioner,” who acts like a congressional member but can’t vote like one. Like their resident commissioner, Puerto Ricans are barred from voting in congressional and presidential elections. As a result, Puerto Ricans are struggling to survive as second-class citizens, remaining subject to the colonial power of the U.S. government that deprives them of both representation and the resources necessary to become a stronger addition to the union. This problem and question of modern-day American colonialism in Puerto Rico is undeniably present today.

In 2017, the island was devastated by the catastrophic Hurricane Maria, which resulted in the displacement of hundreds of thousands of Puerto Ricans and 3,000 deaths. As the natural disaster dominated media outlets, the domestic public pressured President Trump to act beyond his unrestrained tweets. Trump was further criticized for hesitating to send federal aid to Puerto Rico, with the saga concluding two weeks after the hurricane hit as he finally visited the ravaged island. The visit resulted in a viral video of the President throwing towels into the crowd like it was an NBA game, leading both Americans and Puerto Ricans alike to question the capacity of the U.S. government to respond and send aid when a natural disaster hits. The video also confirmed Puerto Rico’s worst fears — the only government that they can rely on has failed them by treating the aftermath of Hurricane Maria and the Puerto Rican people like a joke.

Three years passed, and Puerto Ricans have experienced tragedy after tragedy. On January 8th of this year, the territory experienced a 6.4 magnitude earthquake, leaving two-thirds of the island without electricity and widespread fear that possibly worse aftershocks will soon follow. After an entire month of deliberation, on February 7th, the House finally approved a $4.89 billion emergency aid package with additional tax relief for the devastated territory. However, despite the successful approval of the bill, 160 Republicans actually voted against it, indicating that there is still heightened debate surrounding Puerto Rico and the U.S. federal government’s obligation to aid the territory. President Trump, who further inflamed the discussion by threatening to veto the bill, stated that sending aid raises many concerns for taxpayers as corruption and misallocation of funds is rampant in Puerto Rico. Although Trump’s neglect of Puerto Rico is outrageous, his worries about corruption in the territory are, on some levels, valid.

Just days before the House approved more aid to be sent to the earthquake-shattered country, on January 21st, there was a discovery of a warehouse storing an “abundance of supplies” meant to be distributed to Puerto Ricans in 2017 after Hurricane Maria. Such supplies included gallons of water, cots, diapers, gas stoves and expired baby food. All untouched and unused. However, this corruption in Puerto Rico is nothing unseen before. One year prior, Puerto Rican governor Ricardo Rossello resigned after intense public pressure due to his use of public funds to finance his party’s activities and line his own pockets. Thus, Puerto Ricans are not unfamiliar with corrupt and negligent leadership within their island.

Puerto Rico has made attempts to combat this corruption in the past. In 2017, after the calamitous Hurricane Maria, Puerto Rico passed an Anti-Corruption code and created a “transparency portal,” where “information concerning funds and contracts for post-Maria are logged.” But this system ultimately failed. At the time, post-Hurricane Maria, most Puerto Ricans didn’t have power or electricity to keep track of the system and where resources were going. Thus, despite this Anti-Corruption code, there was still a lack of accessibility to information, allowing for corruption and redirection of funds to continue to take place. Other failures of the Anti-Corruption code include the inadequacy to address the issues of nepotism and extravagant salaries for public officials as well as the inability to create an efficacious judicial process to prosecute those charged. These attempts to fight corruption fall short of the reform Puerto Ricans deserve, leaving the the people with an elite class and government that continuously profit at the expense of ordinary people.

The answer to why Puerto Rico is so corrupt lies in its complicated history and current relationship with the federal government. First, Puerto Rico became a “part” of the United States through the Insular Cases in the early 19th century. The controversy at the heart of these cases was whether the United States had to extend the Bill of Rights to Puerto Ricans after it had “acquired” the territory. The notorious case has not been overturned, rendering Puerto Ricans second-class citizens, depriving them of any sort of financial and economic independence and stripping the island of a cohesive identity. In fact, this fragmented and distorted perception of Puerto Rican national identity is reflective in last year’s census — more than 75 percent of Puerto Ricans identified themselves as white despite many actually having roots in Africa. Whether this is a product of colorism or a desire to feel more attached to the white U.S. population or both, ever since the Insular Cases, there has been an absence of national unity and patriotism on the island. The saddening statistic is also indicative of the divide between Puerto Ricans — stranded with the question of their own national identity or still yearning to feel more included in the country that continues to reject and neglect them. According to a study done by the World Bank, countries with less nationalism tend to be more corrupt.

Puerto Rican-American relations don’t end there. Through the Jones Act passed in 1920, it was legally mandated that “vessels transporting goods domestically be U.S.-crewed, U.S.-flagged, U.S.-owned and U.S.-built.” While this does secure reliable transportation for goods flowing from mainland U.S. to Puerto Rico, the act is criticized for its stringent requirements that further sequesters the Puerto Rican economy. Not only does this gut the health of the Puerto Rican economy, the World Bank claims bad economic conditions only propagates corruption. The Jones Act simply corroborates the idea that this long established American hegemony over Puerto Rico has not benefited the territory in the long-run.

Lastly and perhaps more controversially, in 2016 the Obama administration passed the Puerto Rico Oversight, Management and Economic Stability Act (PROMESA) in response to the $72 billion debt crisis the island had been facing. Because Puerto Rico is a commonwealth and not its own country, the territory is unable to declare bankruptcy on its own and is therefore subject to the authority of the PROMESA. Under the PROMESA, Puerto Rico is forced to restructure its debt and impose harsh  austerity measures on its population, both conditions that are are wildly unpopular among Puerto Ricans. The extreme budget cuts have led to an understaffing of police officers, the arbitrary closing of public schools and cuts in public pensions and healthcare. However, the largest outrage came from the fact that the directors of the finance board supervising Puerto Rico’s debt restructuring were all from the mainland U.S. appointed by Congress. None of them were from Puerto Rico, none of them were familiar with the condition of the Puerto Rican people and none of them truly had the interests of Puerto Rico in mind. This colonial oversight is nothing new to Puerto Rico. The difference is that the invasive 2016 act is still in place today, and it serves as a reminder of its lack of sovereignty.

In response to the question of Puerto Rico, its inhabitants formed the Citizens’ Victory Movement political party (Movimiento Victoria Ciudadana or MVC in Spanish). Founded on March 11, 2019, the party operates on an anti-corruption platform and advocates for social, political and economic reform and reconstruction. More broadly, the party strives to eventually answer the question of what Puerto Rico is by calling for a constitutional assembly to finally decide whether it is a state, its own country or of free association status with the U.S.

According to the UN, Puerto Rico is not officially considered a colony due to its substantial achievement of “self-government.” While the existence of the PROMESA directly contradicts this, the diagnosis of the situation is that Puerto Rico’s political status, or its lack thereof, is leading to its own downfall. Statehood, sovereignty or a balance between the two all have their own advantages and drawbacks. This article is also not meant to prescribe a solution or remedy the problem — the purpose is to remember that the question of Puerto Rico is an important one and has been since 1901, when it became a part of the United States. Up until now, Puerto Ricans have been suffering in this perpetual cycle of failed politics and modern-day colonialism. At home, they face rampant corruption and ineffective government, and in the wider context, they are simultaneously deprived of both their sovereignty and resources to become more incorporated into the United States. This negligence on behalf of the U.S. government has left the commonwealth in a political stalemate, faced with never ending corruption and lack of representation within the U.S. that continue to feed the problem. However, more Puerto Ricans are moving to mainland U.S. due to natural disasters and the hopes for better living conditions and opportunities; they are beginning to raise the question of which presidential candidates they will support in this upcoming election and how influential their voting patterns will be in the future. Although in 1820 Chief Justice Marshall said that “representation is not made the foundation of taxation,” Puerto Rico and its people do not deserve to be neglected, disregarded or forgotten.