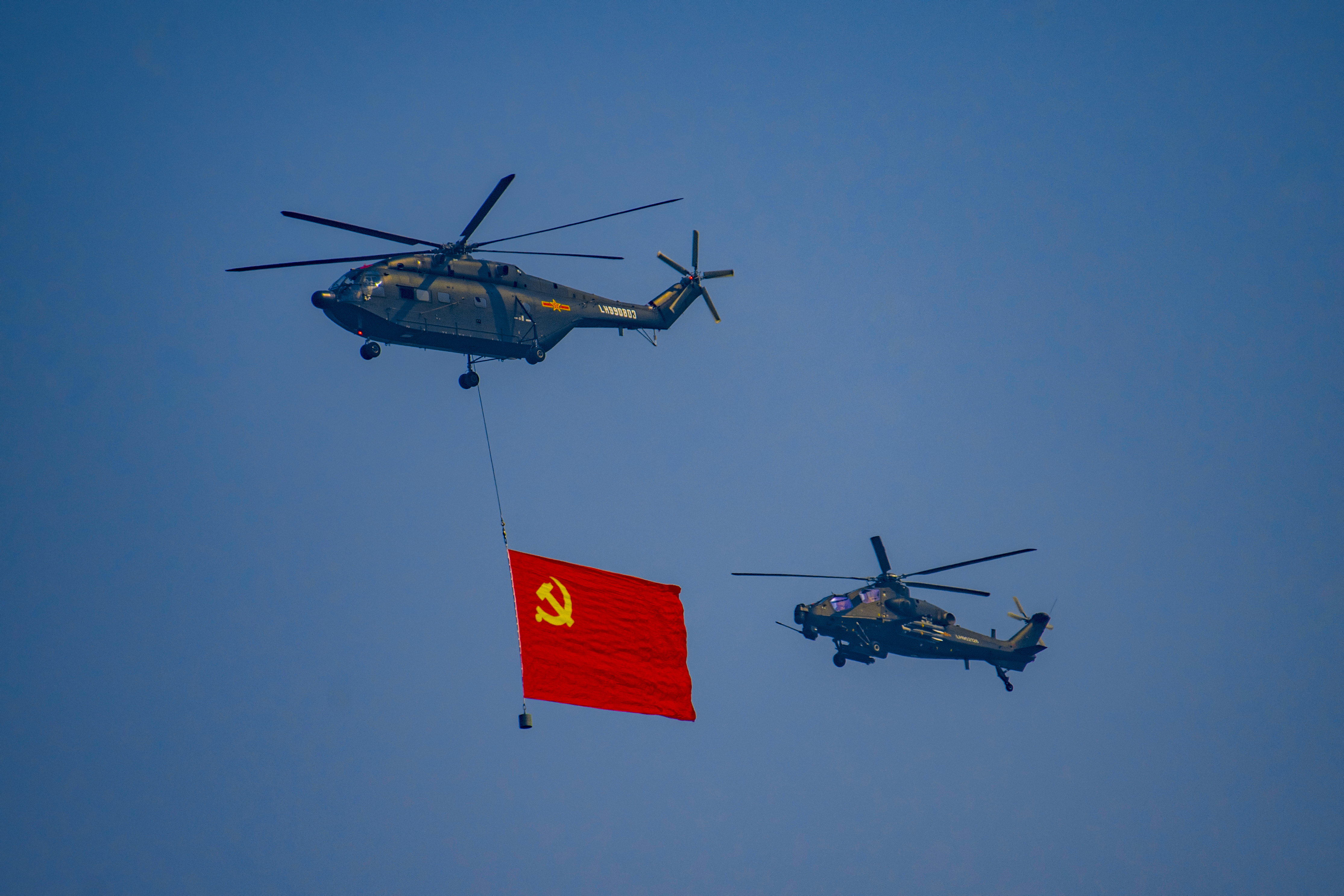 Standing before the 17th General Assembly of the Chinese Academy of Sciences just over a year after his election to office, Xi Jinping opined, “we cannot always decorate our tomorrows with others’ yesterdays.” Five years later on October 1st, 2019, President Xi echoed that sentiment while addressing a crowd of thousands in Tiananmen Square, declaring, “China yesterday is already engraved in the history of mankind […] and China tomorrow will be even more prosperous.” Throughout his tenure as president, Xi Jinping has spearheaded China’s “transition to innovation-driven growth”, first called for in his speech to the Chinese Academy of Sciences. In the year of China’s 70th anniversary, such a transformation is worth reflecting on.

October 1st brought an anniversary parade of extravagance to the nation’s capital city of Beijing, where security was high and military muscle flexed. Xi Jinping delivered an address to the nation, footnoting his administration’s struggles geopolitically and domestically while extolling Chinese nationalism and “Socialism with Chinese Characteristics.” Despite the trouble brewing amid a messy U.S.-China trade war and an even messier handling of the Hong Kong protests, the success of China’s state-sponsored innovation may eclipse these geopolitical threats.

A September 18th report from the Council on Foreign Relations revealed that the United States is losing its innovation edge to China in a variety of ways. Not only is Beijing projected to be the leader in R&D funding by 2030, but also the leader in, “artificial intelligence (AI), robotics, energy storage, fifth-generation cellular networks (5G), quantum information systems and possibly biotechnology,” the report furthered.

This acceleration is prompting some nations to try to hit the brakes on Chinese-made technology. Chinese telecommunications giant and major distributor of 5G Huawei Technologies was effectively banned from the United States in May. U.S. officials cited concerns about the close working relationship between the major tech firm and the Chinese government, exposing the urgency felt by the U.S. to hold back Chinese advancement. Further, the widespread adoption of Huawei networks and products worldwide, especially in places like Africa, have ignited fears by Western countries that China is strengthening its global footprint through its telecommunications industry.

Cyberwarfare is also a demonstrable part of C.P.C. strategy, as evidenced by the 2019 Worldwide Threat Assessment report published by the U.S. Director of National Intelligence. The report lists China as “the most active strategic competitor responsible for cyber espionage against the US Government, corporations, and allies,” with specific attention given to its cyber theft of intellectual property and the destructive capability of Chinese cyber attacks on critical US infrastructure.

Moving down from a top-level analysis, it’s time to examine how each element of this C.P.C. strategy functions.

Beijing holds a natural advantage over many of its Western counterparts in the realm of innovation. As a unitary, centrally-planned state, the line between public and private is blurred almost to the point of obscurity. Foreign Policy’s Ashley Feng writes that recent formal and informal actions of the C.P.C., “make it quite difficult to distinguish between what is private and what is state-owned.” Doctoral student Phillip Rogers comments that the C.P.C. has a strong grip on the “levers of control,” within private companies through licensing, permit distribution and administrative procedures. All told, Beijing exerts significant influence over the private sector, allowing the Chinese government first-hand access to the inner-workings of the biggest Chinese companies without the need for prior consent.

In addition to influencing domestic companies, foreign multinational corporations (M.N.Cs) are far from immune to the hand of the Chinese state. Forced Technology Transfers mandate M.N.Cs to bend over backwards to operate in the vast Chinese economy, a market that good capitalists find hard to resist. According to a report from the United States Trade Representative, 21 percent of members in the American Chamber of Commerce in Shanghai, “had felt pressure to transfer technology in exchange for market access.”

At the heart of these sweeping policy changes pushed by the Xi administration is the pledge “that China will become a “global ‘innovation leader’ by 2030.” One of the most commonly discussed pieces of policy is the Made in China 2025 initiative. An article from the Diplomat explains that Made in China 2025 aims to turn China into a manufacturing superpower by isolating “10 priority sectors” which includes AI, aerospace and information technology. The C.P.C. has been pushing hard to reduce its reliance on outside economies through this initiative, leading to an uptick in technological and economic innovation.

Artificial intelligence is one of the most notable areas of expansion. While speaking at the Center for Data Innovation, the U.S. Chief Technology Officer Michael Kratsios cautioned that China is quickly bridging the gap in AI research with the United States, a fact that would not have been possible without policies like Made in China 2025. Phillip Rogers adds that China has a fundamental advantage in developing machine learning as a result of the sheer quantity of data China can access through its population.

While important, innovation alone is incapable of delivering the results Xi Jinping commands. To accomplish the daring vision of the C.P.C., the power of information-sharing must be harnessed. President Xi has done this by exploiting the telecommunications industry. Telecommunications technology refers not only to the expansion of dedicated telecom providers like Huawei but also to the increased level of censorship and the exportation of state-run media as a method of control. According to an annual report on worldwide freedom in media by Freedom House, the C.P.C. has aggressively increased its worldwide media presence over the past five years, producing pro-Chinese news organizations that are “promoting the C.C.P.’s narratives, suppressing critical viewpoints and managing content delivery systems.”

A recent controversy emerged in late September of this year, as documents revealed how popular social media app TikTok censors posts referencing events like the 1989 Tiananmen Square Massacre. This is no surprise, as China was ranked the worst country for internet freedom for the 4th consecutive year in the 2018 Freedom on the Net report, which noted how a 2017 national intelligence law used to force public-private partnerships was also used to mold social media platforms like WeChat into agents of the C.P.C.

China’s immense disinformation power is on display as the widely reported Hong Kong protests drag on with no resolution in sight. These protests are being heavily censored and misrepresented in Mainland China and by state-run media initiatives around the world. According to Gary Wong, professor of sociology from the University of Hong Kong, many social media platforms have become hotbeds for, “sharing disinformation to discredit the protestors […] and exaggerate the level of violence.” In the case of Hong Kong, C.P.C. manipulation of the narrative has led to nearly unbridled police brutality against protestors and rampant imprisonment without due process. By misinforming, censoring, and manipulating, the Chinese government enables its policy vision around the world.

In addition to its expansion worldwide, the C.P.C., in association with Huawei and other major telecommunications distributors, is positioning itself to win the “race” for 5G. Presently, Huawei has over 60 commercial contracts to facilitate the adoption of 5G networks. 5th Generation cellular networks are set to reshape the Internet of Things, making it a critical technology for any innovation-leading country to acquire. According to Phillip Rogers, controlling 5G distribution means controlling the flow of information. These fifth-generation networks aim to reimagine connectivity completely, ushering in a new era of technological innovation, or rather, domination.

The final prong of the C.P.C.’s technology strategy is focused on cyberspace. The RAND Corporation defines cyber warfare as “actions by a nation-state or international organization to attack and attempt to damage another nation’s computers or information networks through, for example, computer viruses or denial-of-service attacks.”

The C.P.C. takes advantage of such cyber vulnerabilities on all levels to attempt to disrupt the international community. In early 2018, a theft of over 600 gigabytes of information from a U.S. Navy contractor was tied to Chinese state-sponsored hackers. Later that same year came the unsealing of a Department of Justice indictment against two Chinese nationals accused of numerous computer intrusions in coordination with the Chinese Ministry of State Security. Recent reporting indicates a concerted effort by the state-sponsored “APT3” cybercrime group to infiltrate U.S. companies’ networks and steal valuable information as the trade war continues with no resolution in sight. A multi-year initiative undertaken by hackers also associated with the Ministry of State Security successfully infiltrated eight major computer firms including IBM and Hewlett-Packard Enterprises.

Observed together, these attacks reveal a broader pattern of espionage and subterfuge by proxies of the C.P.C.

The cyber policy of the C.P.C. is not limited to espionage, however. Ellen Ioanes writes in an article for Business Insider that advanced Chinese cyber capabilities threaten coordination of battlefield and military defenses by jamming communication channels of adversaries, while the 2019 Worldwide Threat Assessment warns that Chinese cyberattacks could “cause localized, temporary disruptive effects on critical infrastructure.” While such attacks have yet to be used directly between major powers, a 2015 Russian-linked attack on the Western Ukrainian power grid that left 240,000 citizens temporarily without power demonstrates the present capacity for an attack of this nature. Coupled with the significant increases in technological capacity in the following 4 years, the possibilities of these disruptive infrastructure attacks continues to increase.

In addition to infrastructure-based attacks, Gary Wong notes that China has utilized Distributed Denial of Service (DDoS) attacks against key websites such as LIHKG used by Hong Kong demonstrators to communicate and organize.

The full cyber capabilities of the C.P.C. have yet to be displayed. Instead, the party has teased the international community with hints at the full power of its cyberspace investment. It is difficult to predict exactly how the Chinese government will harness the power of cyberspace but early warning signs demonstrate a policy vision aimed at crushing international competition and coercing governments.

Speaking to the world on October 1st, 2019, President Xi Jinping declared the ushering in of a new era: “Having caught up with the world in great strides, we are now marching forward at the forefront of the times with boundless energy!” Five years ago, President Xi dictated a shift to innovation-driven growth while speaking to China’s scientific leaders in the Chinese Academy of Sciences. Today, as China celebrates its 70th anniversary, Xi Jinping can rightfully enjoy a sense of accomplishment. The techno-strategic ambitions of the CPC are being realized in ways once thought impossible as China rockets toward its goal as the global technology leader. Despite the international community’s best efforts, President Xi has successfully crafted China as the example of “tomorrow.” Whether that is a good thing remains to be seen, but the evidence doesn’t provide much in the way of comfort.