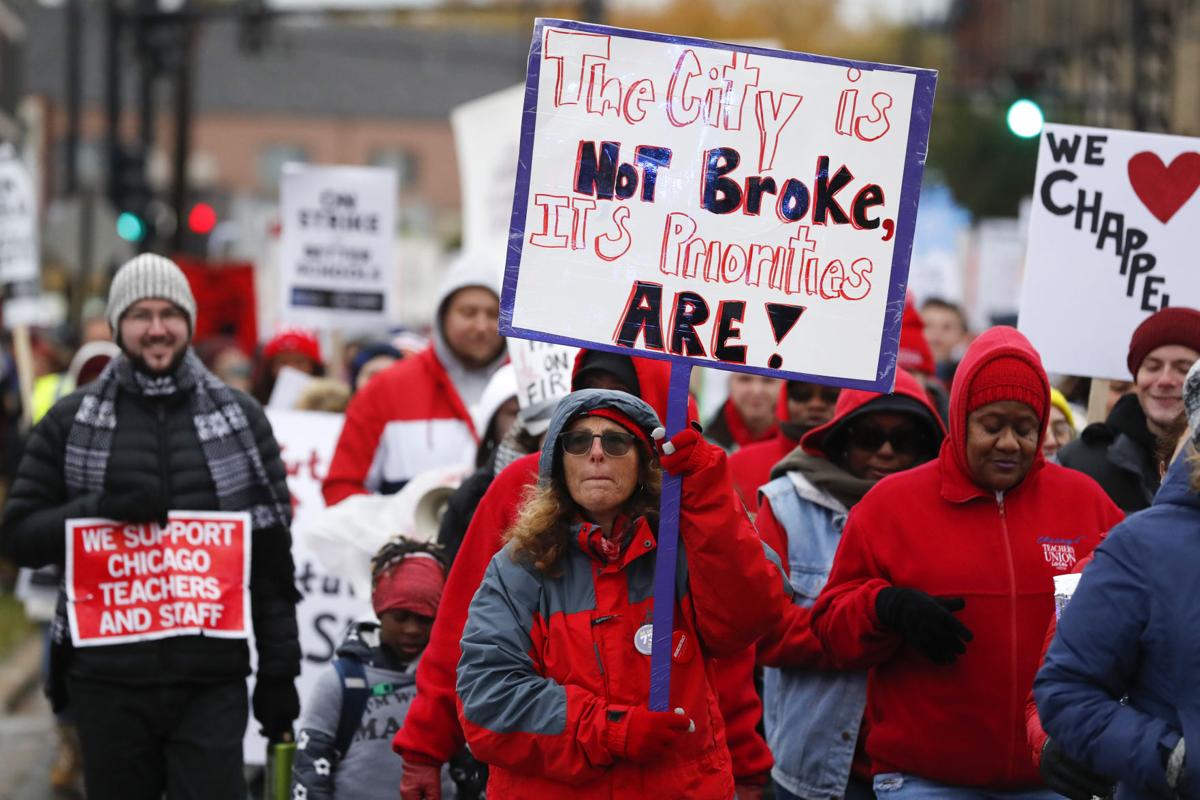 What the Chicago Teachers’ Strikes Reminded Us About Public Education

Like our parents, they see us off when we cross the stage and graduate. They applaud us, they congratulate us and they say their goodbyes. Years later they retire, and we learn that they’re just above the poverty line, even after those 45 years of dedicated work. We reminisce on their career and realize that their workdays didn’t immediately end at 3pm when the bell rang and dismissed us. They stayed behind to attend meetings, grade our work and plan for tomorrow, amounting up to 12 to 16 hours of work per day. These are our public high school teachers.

From October 20th to 31st of this year, the Chicago Teachers’ Union (CTU) went on strike for 11 days — the longest teacher-led strike since 1987. While many Chicago parents were infuriated with the fact that 300,000 children in the Chicago Public Schools District (CPS) missed class due to the strikes, the 33,000 teachers that flooded the streets of downtown Chicago weren’t only advocating for themselves and better pay — they were also seeking to better the conditions of the public schools in the district. The 33,000 teachers advocated for smaller class sizes, an expansion of mental health services on campus, more protection for immigrant students and even affordable housing. Historically, the Chicago Unified School District has lacked in many of these areas. One 6th grade teacher recalls a time they taught the entire 6th grade class of 57 students due to a lack of accommodation for the students. Other students disclose that they have not had a teacher for the school year. This negligent void is haphazardly filled with rotating substitutes, who are unable to provide the teaching quality of one consistent teacher.

In the Chicago Public School District, classrooms are overcrowded, teachers are underpaid and the curriculum, academic resources and the services are all outdated. While this is a problem in itself as 300,000 students rely on public education from CPS, the bigger problem is that this isn’t just in Chicago — many other school districts around the country exhibit the same condition, if not worse.

In 1971, Demetrio Rodriguez, a particularly upset parent, actually sued his children’s school district, the San Antonio Independent School District (of San Antonio, Texas) for such inequalities. He challenged that the Texan system that relied on a property tax base for public school funding is unfair, as it leads to undeniable disparities between school districts. His lawyers contested that it was a violation of the Equal Protection Clause of the 14th Amendment, in that families residing in the district were being discriminated against. The case went to the Supreme Court in 1973, only to be shut down by a 5-4 decision in favor of the Texan system. While the parents were right in that this funding framework for public schools undeniably results in great disparities between districts, the Supreme Court decided it lacked sufficient evidence to prove that the students and teachers were actually being discriminated against for less funding. As Justice Powell stated in his majority opinion, the Equal Protection Clause does not guarantee “absolute equality or precisely equal advantages,” nor is it legally required to. The Court also fails to recognize education as a “fundamental right,” as the Constitution does not address nor call for the need for equal education.

But is education not a “fundamental right” today in 2019? Since the framing of the Constitution, we have undoubtedly rearranged some of our priorities. For example, the Third Amendment, which prohibits the forced and unwanted quartering of British soldiers in American colonists’ homes, may have been necessary in 1791, but is seemingly relevant today. Although the issue of equality in public education has been neglected throughout U.S. history, it is an issue we cannot avoid nor abandon today. Of the 56.6 million American students attending elementary, middle, and high schools in the United States, 50.8 million rely on the public education system. That’s over 89 percent of all American students. 89 percent of students we can’t fail. Despite the loss against the Supreme Court in 1973, we have to try and try again. While some fiscal conservatives have argued that funding for public school education isn’t and shouldn’t be a priority nor responsibility of the government, we should remember that this isn’t an issue that should be politicized. The advocacy for quality public education is a human right.

And that’s exactly what Oakland Unified School District’s (OUSD) teachers and students fought for earlier last year in March. They drew attention to constant teacher turnover, an unlivable $46,000 salary in a city where the monthly rent of a one-bedroom apartments averages at $2,300, and billionaire board members’ endeavor to cut public school funding in order to elevate their business interests. As a result, the OUSD’s teachers received an 11 percent pay raise over 4 years, smaller class sizes and more support staff such as nurses, counselors and even speech pathologists. So is this the solution? Should teachers all around the country be forced to strike and fight for more funding until all public schools are equal?

Some don’t think so. According to a research study conducted by the Cato Institute in 2014, although the average per-pupil spending across states has increased by approximately 120 percent since 1970, academic performance and quality of education has not improved. As a result of the study, it was concluded that there isn’t a strong enough correlation between spending on education and academic performance. This is partially true. We can’t simply funnel more money into an underfunded public school and expect all of the issues to resolve themselves. It just doesn’t work that way. Some schools, such as those in the CPS and OUSD, receive a sufficient amount of funding — it’s just not going to the right places. In the OUSD, board members were revealed to be “billionaire-bought” chess pieces, seeking to pursue their private interests at the expense of budget cuts of funds of public schools.

However, increased funding can better academic performance and quality of education in some contexts. In a nonpartisan research study conducted by the Public Policy Institute of California, school districts with higher concentrations of English learning students require more funding since English-learning students need more monitoring, support and resources to assure academic success. This would mean more support staff, more investment in English-learning academic programs and resources and essentially more funding for a whole new department. This department would be responsible for tracking these students’ English learning process over the years. In California, one of four students is an English language learner, yet 75 percent of teachers surveyed (as part of a Teachers College Record Journal article) said they use the same textbooks for both English learning students and English-only students. On top of that, only 46 percent reported using any supplementary materials for E.L. students. So yes, more funding can enhance the quality of education in certain situations, and this funding should be tailored to the neighborhoods they’re situated in. Under this hypothesis, public schools in predominantly white neighborhoods would need less funding, while those in neighborhoods with higher concentrations of non-English speaking families would need more funding because they would need more support. This does not suggest any biases in funding, but rather necessary adjustments that have to be made in order to assure that everyone has the most equal opportunities they can get possible.

But how do we account for teachers? Beyond the lack of high quality education provided to American public school students, there is still yet another problem that needs to be addressed. Teachers aren’t getting paid enough, and so they leave, which begets high turnover rates, leaving students in academic limbo. These students wait to be introduced to another teacher mid-school year, after enduring an exhausting rotation of substitutes who are only present for such a transitory time frame, insufficient for teaching and developing personable relationships and connections with students. In addition to this revolving door of substitutes, this situation has other implications: high turnover rate of teachers can eventually suggest to students that they just aren’t worth the investment. And so they lose motivation.

According to a study on how teacher turnover rate can affect student achievement, schools with the highest turnover rates also rank the lowest in student academic performance. And for the teachers themselves? With low salaries, they often retire just above the poverty line. Throughout their careers, some have recalled times they had to sleep in their cars because they were evicted. Meanwhile, others have adjusted to such laborious routines in order to teach while also barely remaining financially stable: they either become “super-commuters” living cities away from their classrooms or even work two jobs to continue supporting themselves. Even with a college degree, a societally important career and a supposedly stable job, teachers find themselves living in abject circumstances. The answer here, just as democratic presidential candidates have proposed, is that they need higher pay. Not only for their own livelihood, but also for the students that they spend 8 hours a day with.

Although the current status quo suggests that equity in education is an unattainable goal, we can learn from the CTU’s strikes that mobilization is only the beginning. While the fiscally conservative can argue alongside the 1973 Supreme Court decision that ruled education isn’t legally required to be equal, we must remember Chief Justice Warren’s words in Brown v. Board of Education, in which he stated that “A sense of inferiority affects the motivation of a child to learn.” Whether or not you support the strike that just took place in Chicago, inequity in public education is undeniably rampant and necessitates a concerted response.