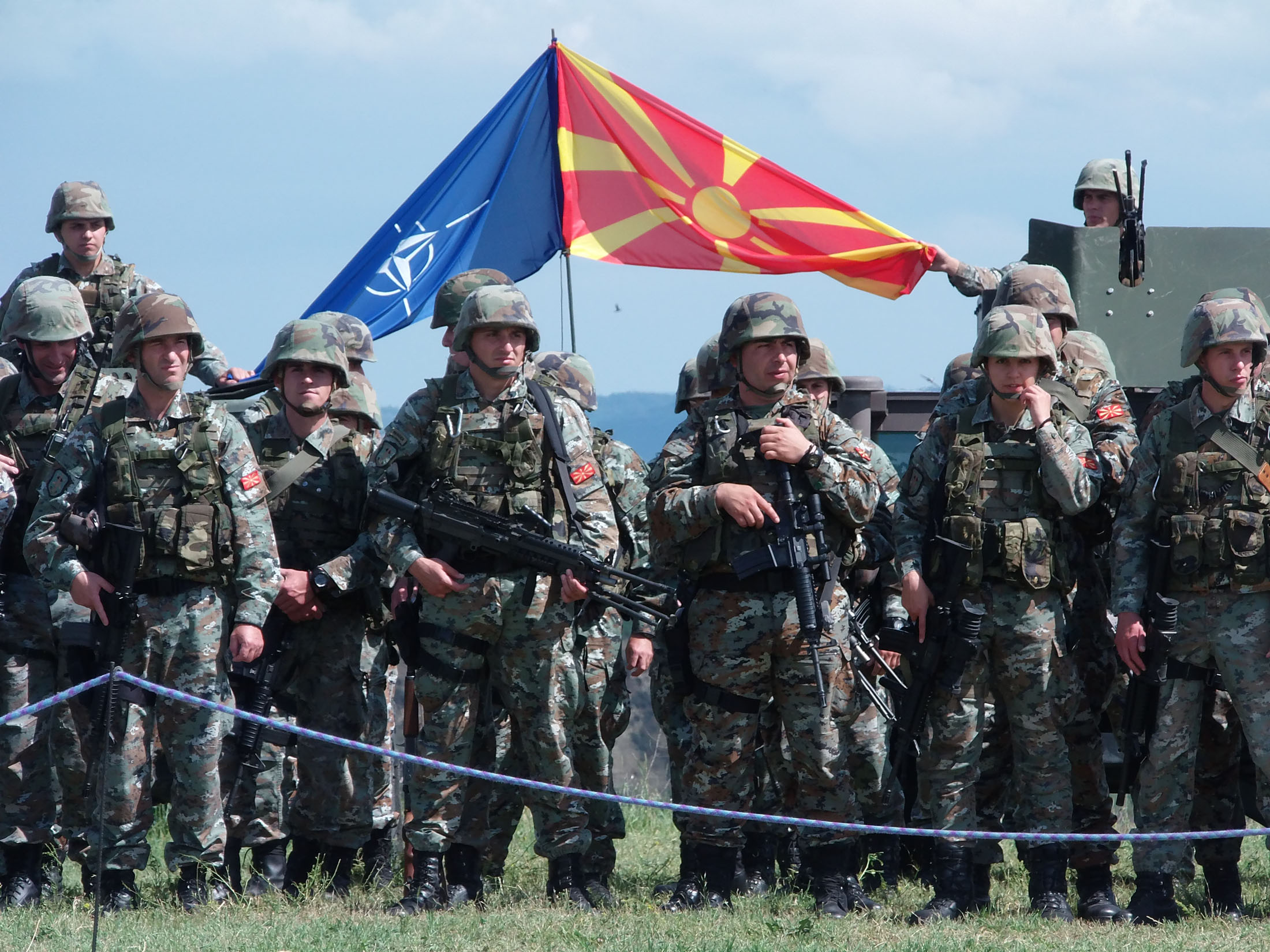 What’s In A Word? The Republic Of North Macedonia And NATO

The EU accession process is not an easy one. To win support from current members, states pursuing membership must often make hard-fought diplomatic compromises and concerted efforts to put their domestic affairs in order. North Macedonia was expected to have a particularly difficult time; the government faces major ethnic tensions with Bulgaria and still faces lingering effects of its bitter dispute with Greece over its name.

Instead, accession talks on October 18th saw North Macedonia gain the full support of Greece, Bulgaria and indeed, all E.U. members except France.

French President Emmanuel Macron explained his opposition by stating that the E.U. is not in any condition to take on new members without substantial reforms, although he was nebulous about any specific proposals. The strength of French opposition remains to be seen, especially after the prompt criticism from other E.U. nations. In the meantime, the governing coalition in Macedonia has called snap elections, as E.U. accession was a core part of its platform. N.A.T.O. membership talks are proceeding more constructively; N.A.T.O. Secretary-General Jens Stoltenberg commented in a recent interview that he expects the existing members to admit North Macedonia before the end of the year.

The latest developments with France may not be a rejection of North Macedonia specifically so much as they are a personal gesture by Emmanuel Macron. Macron appears determined to claim a leadership role for himself and for France in European affairs, and it appears that he feels decisive leadership and audacious criticism is the way to increase his stature, even at the cost of alliances and friendships. This should not prevent an appreciation of just how far the country has come in addressing obstacles to its European integration. The naming dispute originated in 1944 when Macedonia was established as a constituent state of the new Socialist Federal Republic of Yugoslavia. Both the new state and Greece included territory that was historically part of the historical Kingdom of Macedonia, and both considered that historical legacy an important part of their national identity. After the breakup of Yugoslavia, Macedonia became the Former Yugoslav Republic of Macedonia (FYROM), an unwieldy arrangement that was generally unsatisfactory and still prompted protests from Greece.

The then-FYROM began working towards E.U. membership in 2004 and received candidate status in 2005. Negotiations with Greece over the use of “Macedonia” began even earlier, in 1995, and finally produced a preliminary agreement in June 2018. This agreement produced the compromise of “North Macedonia” — potentially confusing, but far better than the previous arrangement and satisfactory to Greece. The agreement was put to Macedonian voters for approval in September of that year and endorsed by a 94 percent majority, but with less than the required 50 percent turnout. North Macedonian PM Zoran Zaev then pursued the issue within the legislature, finally winning approval for a constitutional amendment to change the country’s name in January. The Greek parliament promptly ratified the agreement as well.

This has not removed all of the obstacles in North Macedonia’s path; Bulgaria also has veto power over prospective E.U. members and has demanded certain concessions that have long been demanded by nationalists, including the alteration of memorials to remove references to its occupation of the Macedonian state during WWII. As a matter of principle, the Bulgarian government denies the existence of a Macedonian language, ethnicity and culture and views these as offshoots of its own. Considering the notorious inflexibility of nationalist views in the modern Balkans, Bulgarian support for accession talks is a promising sign, and it may indicate a willingness to keep these issues as a diplomatic matter and not allow them to block other cooperation.

The substantial Albanian ethnic and cultural minority within North Macedonia may also lead to future conflict. Albanian militants fought a brief insurgency against the government in 2001, ending when NATO troops intervened, compelling the government to grant the Albanian minority official recognition and improved treatment. Tensions have been relatively quiet since, with occasional incidents of violence, including a shootout between police and alleged insurgents in 2015 and the storming of the parliament building in 2017 by Macedonian nationalists. Albania itself has good relations with North Macedonia and was not closely linked to the violence in 2001; the insurgency had closer ties to armed movements within Kosovo. North Macedonia recognizes Kosovo and has done do since 2008, but there have been disagreements over border demarcation. With Albania also looking to begin accession talks and Kosovo working its way through the EU Stabilization and Association process, there would seem to be no incentive for any of the states involved to escalate tensions. However, the blockage of the accession process by France may disrupt the progress reached on settling these issues.

Indeed, France’s veto already threatens to disrupt the progress that Macedonia has made on tensions with its neighbors. PM Zoran Zaev’s Social Democrats staked their political future in large part on progress towards EU accession, and the failure to accomplish this has given the opposition a significant talking point. Critics have pointed to the lack of progress on corruption and other domestic issues, whether or not this actually factored into France’s decision at all. The opposition VMRO-DPMNE party opposes the deal with Greece, the normalization of relations with Bulgaria and membership in the EU and NATO, and a shift in government could jeopardize the significant progress of the past few years on these issues. VMRO-DPMNE traces its political heritage to the Internal Macedonian Revolutionary Organization (IMRO), originally a nationalist movement operating against the Ottomans and later an irredentist terrorist group.

The VMRO-DPMNE is also notably pro-Russia, and this fact has caused significant concern among observers. Russia opposed North Macedonia’s efforts to resolve its dispute with Greece at every stage, from the adoption of the interim agreement to the legislative effort to ratify it despite the failed referendum. The presence of domestic opposition to the deal has given Russia a significant talking point, and the latest setback in the accession process may give weight to anti-EU political voices and by extension, to Russia.

To be sure, Russian interest in the Balkans is not merely a product of opportunism. The region is broadly recognized as the next logical frontier for the expansion of N.A.T.O. and the E.U., not least by those organizations themselves. From the Russian perspective, this is an unacceptable regional threat, another step in the “encirclement” of Russian territory by the west, notwithstanding the fact that no Balkan country borders Russia. Russia likewise considers the Balkans part of its natural sphere of influence, dating back to the nineteenth century and to Russian assistance to independence movements against the Ottomans.

Russia tends to consider the defense of these perceived interests to be an absolute national priority, one that justifies aggressive, unlawful or underhanded actions; they display the mentality of a country under siege and facing an existential threat. The occupation of Crimea and the support for militants in Donbass and Transnistria are the outstanding examples, but other proven or suspected Russian efforts include the coup attempt in Montenegro in 2016 and support of Hungarian PM Victor Orban.

Events in Macedonia suit Russia perfectly. Although efforts to exploit the name dispute with Greece to raise tensions in the region seem to have failed in the short term, the upcoming elections are a golden opportunity for political influence efforts, and a VMRO-DPMNE government would be a tremendous regional asset. All eyes — whether in Skopje, Brussels, or Moscow — are now on the snap elections in April.