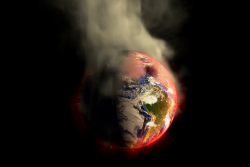 “Carpooling Can Save the Planet,” and Other Lies Exxon and Shell Want You to Believe

During the Cold War, students learned to duck and cover under their desks in the event of a nuclear bomb.  The flimsy wood wouldn’t have made an appreciable difference in whether or not they survived, of course, but it must have felt better to have some tiny piece of control over an otherwise terrifying and incomprehensible threat. Now, we face a different annihilation: global warming. Well-meaning people have plenty of personal action items for halting global warming, too: recycle, carpool, eat less meat, unplug your electronics and buy reusable water bottles.

The promise that recycling and carpooling can halt global warming is alluring and encouraging. But it’s just as much of a lie as the claim that wood will withstand a nuclear blast, and it’s a lie that might actually seal our fate. While taking measures to reduce your individual carbon footprint is commendable, the increasing fixation on personal responsibility deflects attention from the main sources of pollution: the twenty companies responsible for a third of global emissions or the top 100 responsible for 71 percent of global emissions. If we genuinely want to halt climate change, carpooling won’t be enough. We must regulate our most prominent polluters.

Since 1965, 20 firms have been responsible for over one-third of all global emissions, releasing 480 billion tons of CO2 equivalent in the past 54 years. The top four investor-owned companies — Chevron, Exxon, BP, and Shell — have released ten percent of the world’s carbon emissions since 1965. In comparison, the average U.S. individual emits 19.75 tons of carbon dioxide annually. This number isn’t good, especially compared to countries with less than a ton of carbon dioxide emissions per capita per year, but it’s only 0.000000002 percent of the emissions from the top 20 firms.

However, these numbers don’t quite tell the full story.  Richard Heede, co-founder and co-director of the Climate Change Accountability Institute, noted that while these 20 companies are, “in the driver’s seat about which resources are extracted and marketed, it’s the consumers that actually burn and demand the fossil fuels that these companies provide […] what the companies do is produce the fuels, extract and market the fuels, so that we can use them. It’s the consumer that produces the carbon dioxide: they may be corporations, airlines, shipping lines, households, utilities. It’s all distributed.”  Heede’s work indicates that a majority of these companies’ total pollution comes from consumers using their products rather than their own production methods – essentially, while Heede agrees that fossil fuel companies have to take greater responsibility, he argues that people must take greater responsibility for consuming those products, too. As anger toward the top fossil fuel producers grows, many Republicans have espoused even more individualistic ideas than Heede’s, arguing that the free market will correct the fossil fuel problem without “punishing” companies who had the misfortune to become involved in an unforeseeable damaging product. However, according to economists, the “free market” only functions properly when the situation meets a number of standards, otherwise there will be what is known as a “market failure.”  In this case, the fossil fuel industry has worked tirelessly to create one of the most classic market failures: information asymmetry.

Exxon, Shell, and other fossil fuel producers have known about climate change since the 1980s and 1990s and have actively smothered attempts to increase general awareness of the danger. A 1982 Exxon internal memo notes that, “our best estimate is that the doubling of the current concentration [of carbon dioxide in the atmosphere] could increase average global temperature by about 1.3 degrees to 3.1 degrees Celsius.”  The document also cited “potentially catastrophic events” that might occur if global warming continued, such as, “flooding on much of the U.S. East Coast, including the State of Florida and Washington, D.C.” if the sea levels rose the expected five meters. Shell’s internal memo from 1988 identified similar concerns, warning that global warming, “could create significant changes in sea level, ocean currents, precipitation patterns, regional temperature and weather. These changes could be larger than any that have occurred over the last 12,000 years.” Exxon also mentioned that, “once the effects [of global warming] are measurable, they might not be reversible.”

Exxon knew that by the time anyone else noticed the problem, it might be too late.  This chilling realization might have caused a different company to take action to raise the alarm.  For Exxon and its fellow fossil fuel producers, however, this conclusion was nothing more than an opportunity to obscure the truth from the public. In 1998, ten years after Exxon warned its own workers of irreversible impending catastrophe from their products, the American Petroleum Institute (API) wrote a rather different internal memo.

The memo argued that, for the fossil fuel industry, “victory will be achieved” only when, “average citizens ‘understand’ (recognize) uncertainties in climate science; recognition of uncertainties becomes part of the ‘conventional wisdom’” and “those promoting [climate change legislation] on the basis of extant science appear to be out of touch with reality.” Ultimately, the memo concluded, “unless ‘climate change’ becomes a non-issue” and “there are no further initiatives to thwart the threat of climate change”, the companies would not be able to, “declare victory for our efforts.” API proceeded to begin producing material for teachers and students undermining the importance of climate change as an existential threat, in particular sending materials to elementary schools to tell them that oil, natural gas and coal were, “more reliable, affordable and convenient to use than most renewable energy sources.”  Exxon, Chevron, Shell, BP and ConocoPhillips were all involved in some capacity. Eighty percent of Exxon’s internal reports acknowledged the reality of human-caused global warming while only 2 percent expressed doubt. In contrast, Exxon’s publicly available commentary on global warming expressed doubt 81 percent of the time.  It’s impossible for environmental protectionist policy to alter a perfect market with government intervention; the energy industry has been broken by intentional misinformation for a very long time.

Economists warn that in cases of information asymmetry – when one party in a sale has more knowledge than the other – adverse selection occurs. Uneven knowledge leads to prices and sales that do not reflect the most socially beneficial price and quantity.  The socially beneficial price and quantity would take into account negative externalities, which are the sale’s adverse consequences that affect people beyond the buyer and seller. However, without public awareness of those negative consequences, the market can’t account for them. The fossil fuel industry’s collective decision to conceal its global warming studies has tainted every sale of fossil fuels from the 1980s onward.  The fossil fuel industry decided it was willing to accept the consequences of selling fossil fuels, but consumers didn’t have the chance to decide if they were willing to accept the consequences of purchasing them.

This information asymmetry lingers: even now that we know about the consequences of global warming and lasting damage has already been done, only 19-25 percent of Republicans believe that human-caused climate change is real.

Government intervention to penalize and restrict pollution from these fossil fuel companies won’t cause a market failure; it will correct one.  Voters will have to apply pressure to their representatives in order to ensure they take a strong stand. They will have to show up at the polls and refuse to accept half-measures.

Recycling, carpooling, biking and going vegetarian are good for many reasons, but they can’t be a substitute for being politically engaged.  Recycling does save energy, reduce litter and create jobs, and it can be a net financial benefit. It also gives us a feeling of control over an enormous problem. Not using plastic straws might not save the world, but it might save a sea turtle, and that’s valuable.

But if we don’t force the government to regulate the fossil fuel industry, no sea turtles will survive at all, plastic straws or not. We can’t just stop at feeling like we’re making a difference; we actually have to make a major difference.  In 1988, just before burying critical climate change information under a deluge of disinformation, Shell consoled itself by feebly arguing that, “it will not be appropriate [for Shell] to take the main burden, for the issues are ones that ultimately only governments can tackle, and users have an important role.” When Shell delegated an “important role” in fixing climate change to users and refused to give consumers any relevant information, it successfully muddied the waters and deflected blame from itself. Now, let’s take back that “important role” – not just by meticulously sorting our compost, but also by forcing governments to hold the companies that got us into this mess to take some responsibility in getting us out of it.