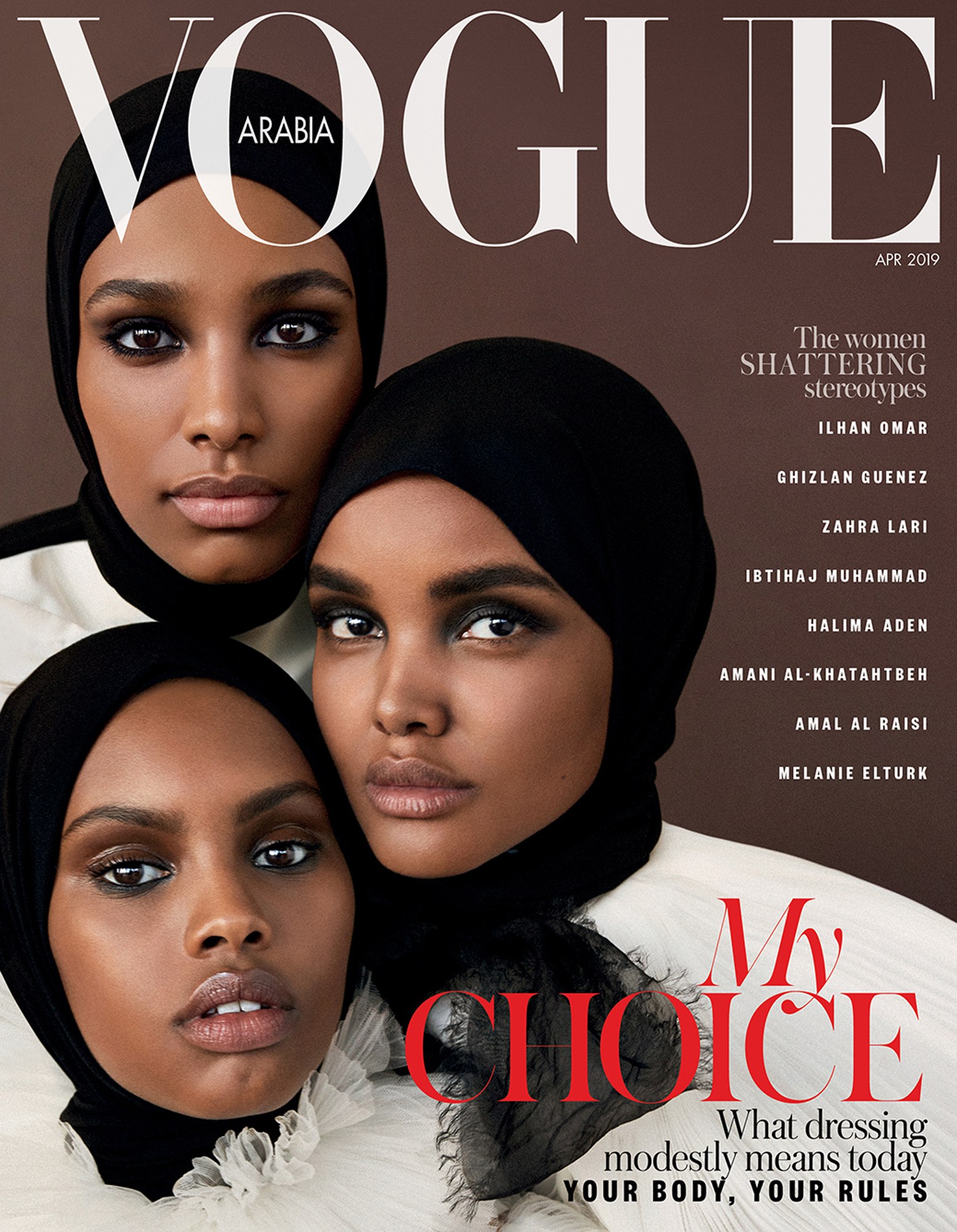 One Size Does Not Fit All: The Rise of Diverse Fashion Models

The 2019 New York Fashion Week runways were said to be the most diverse ones yet, with an estimated 48 percent of the featured models being from minority groups. This statistic is shocking, considering the history of the industry as a whole. For decades, the fashion industry has established the standards of beauty for society at these fashion shows. Usually, the roster of models that walk the runways mirror the same size, stature and race, none of which portray the diversity of the world. White, skinny and tall models have always been the status quo for this industry. These looks are the norm and are considered the epitome of beauty, but consumers are tired of the status quo of what a model should look like. When diversity has been used in the industry, it has been to tokenize certain races and put all “others” in the umbrella of one model. With the growth of social media, increased discourse about the field of modeling has led to the realization that beauty is subjective. Participants of the fashion industry have been calling for a diversification of models on commercials, magazines and runways all over the world. Due to this, in the 2019 Fashion Weeks, audiences were introduced to Muslim hijab-wearing models, models with disabilities and more plus-size models than ever. The rise of diversity in the modeling industry has been highly praised by people who call for an end to conventional beauty.

Diversity is important in the modeling industry because it allows for proper representation of communities that usually lack acknowledgment in mainstream media. Many communities of color are an afterthought when it comes to the fashion enterprises; they are usually cast aside and not catered too. If all the models that are chosen to walk the runways and feature on ads are white, skinny, and tall, the standard of beauty is set as such. This is a toxic and a very Eurocentric view of beauty. These standards of beauty allow for further racism and discrimination of minority communities. Young kids look at these models that fit unrealistic expectations with awe and infatuation. “The Doll Test” is one terrifying example of how Eurocentric beauty standards negatively affect the younger generation. “The Doll Test” was a project conducted by psychologists Kenneth and Mamie Clark to test how the media and the fashion industry affect young girls. Young girls were introduced to two dolls: one of light skin with European features and the other black with African features. Time and time again, the young girls picked the white doll as the prettiest. This studied showed that, “A majority of the children preferred the white doll and assigned positive characteristics to it.” These Eurocentric beauty standards lead to higher rates of eating disorders, self-hate and racism. Intergenerational trauma is an implication of this standard that harms the youngest and most naive of our communities. This trauma can be described as an event that began years before the current generation was born and has impacted the ways in which individuals within a family understand, cope with and heal from trauma. People of color who grow up in a world that tells them white is beautiful will impose these unrealistic views on their children. Colorism, self-hate and skin bleaching are all consequences of Eurocentric beauty standards.

Labels and companies claim they are “diverse” by hiring one person from every minority group and using that person to their disposal. Usually, one model from a disenfranchised group is labeled the token, and all that is needed. “Tokenism can play out on a larger scale as well, giving the impression that the industry is transforming, when in reality, the changes are small,” Valeriya Safronova says in their article analyzing diversity in the profession for the New York Times. Another model Chanel Iman said, “Designers have told me, ‘We already found one black girl. We don’t need you anymore.” If we want a media that accurately portrays the range that human beings come in, we must hold these agencies accountable and call them out when they are underrepresenting the most overlooked groups. With the ostracization of groups comes negative perceptions in media. If all we see are white, skinny Christian models on runways and covers, others become ugly and undesirable. If certain groups become “othered”, there is room for xenophobia and racism to fester in our society.

As the political ideologies of Americans advanced further and further from the center, a rise of xenophobia has swept our streets. Hate crimes are being reported at a rate that mirrors those of the civil rights era. With the increase of hate also comes an increase in hope.

One beacon of hope for diversity and inclusion in America is Somali-American model Halima Aden. Aden and her family immigrated to the United State as refugees of the Somali civil war when she was a child. Aden’s family joined the booming community of refugees in Minneapolis, Minnesota, where she later ran for Miss Minnesota. Aden made history as being the first Muslim, hijab-wearing model to be the cover of Sports Illustrated Swimsuit. Aden wore a burkini, a modest piece of clothing that has been banned from France as a symbol of resilience and strength against the ever-so-growing animosity towards Muslim Americans in the U.S. Aden’s success as a Hijabi modeling allowed for the success of hundreds of other Muslim woman models in the U.S. and abroad. Some of these trailblazing models include Mariah Idrissi, Ikram Abdi Omar and Sara Iftikhar. Hijabi models have been changing the game and allowing for self-expression never before seen in the industry.

Alongside Hijab-wearing models, more plus-size models graced the runways. For many years, activists and critics of the beauty industry have been fighting for more representation of plus-size models. According to PLUS Model Magazine, “In the fashion industry, plus size is identified as sizes 10-14, super size as sizes 1X-6X and extended size as 7X and up”. Due to the fact that the industry has always been “one-size-fits-all,” plus-size individuals have been unjustly underrepresented. The industry has always been known to put models on strict diets and exercise regimens. Models have to pay close attention to what they consume, and these restrictions oftentimes lead to eating disorders. Plus-size models are tokenized and even urged to lose weight, contradicting their purpose entirely. Victoria’s Secret is one company that has been in the headlines for its lack of plus-size representation. Recently, Ali Tate Cutler made history for being the first plus-size model in a lingerie campaign. Cutler says the industry is “headed in the right direction, and they are listening to their audience, who have requested to see more women of diverse shapes and sizes.” The fashion industry has always been blamed for being one of the root causes of body dysmorphia in individuals all over the world.

A rise of models with disabilities has been witnessed in the latest cycle of high-end fashion. More models with disabilities have breaking the glass ceiling and calling the industry their own. Teen Vogue recently made an industry-changing move by having three models with disabilities cover its September issue. Jillian Mercado, Mama Cax and Chelsea Werner all graced the cover, showing off the beauty of their individualities. It is incredibly hard to be a model with disabilities in the fashion industry. Keah Brown states in her article for Teen Vogue, “Disabled people and disabled models are still left out of most campaign ads and runway shows. This lack of representation has implications; when you go so long without seeing yourself, it is easy to interpret that lack of representation to mean you’re ugly and unworthy, that you deserve to be invisible or even worse, are grotesque. The erasure can have an impact on your mental health.” The one-size-fits-all notion of the modeling industry has serious implications in communities that don’t fit these norms world-wide.

Diversity in the fashion industry is important because with representation comes acceptance. Fashion has been a fundamental part of society since the invention of the catalog in 1872. This industry has set the standard of beauty and makes society see certain groups in a certain way. If we don’t see models with different religions, races and abilities on the runway, these groups start to be negatively perceived. With this negative perception comes biases, stereotypes and generational trauma. When we see inclusivity in brands, there comes a normalization of human beings that do not fit the status quo that America has set for generations upon generations. This normalization allows for everyone to live peacefully in their skin and love who they are. A new wave of fashion is on its way, and one size definitely does not fit all.