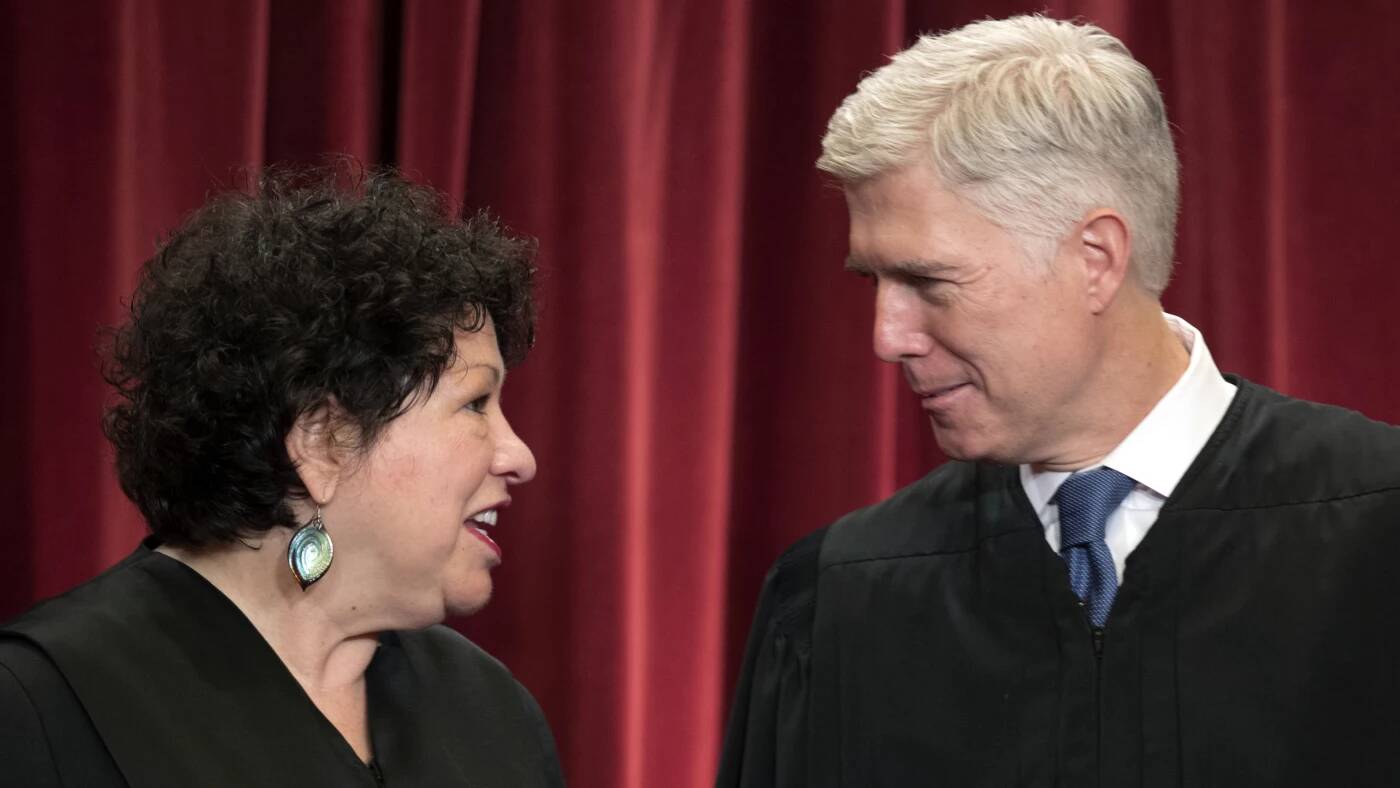 How an Unlikely Partnership Could Save the Supreme Court

We live in a time of nearly unparalleled political animosity.  The words “Trump Supporter” or “Trump Appointed” in reference to a person often cause left-leaning individuals to disregard any merits that person has, and the same being true of conservatives with Obama Appointees.  That makes it not just refreshing, but vital, to the health of our democratic institutions to have cross-aisle friendship and bipartisanship. One such example comes from the nation’s highest court, where Associate Justices Sonia Sotomayor and Neil Gorsuch, appointed by Presidents Obama and Trump respectively, have formed what is an increasingly unlikely partnership in the current political atmosphere. This relationship may be vital in coming years in maintaining the integrity of one of America’s most critical bodies: the Supreme Court itself.

After all, reforming the Supreme Court has become a rallying cry of activists across the country.  Several pundits and politicians, particularly on the left, have specific demands: that more justices be added to the Court, that the justices lose their lifetime tenures, that there be mandated recusals and more.  While it can be said that the Court has changed little since the days of controversial cases like Korematsu v. United States and Bush v. Gore, it is also largely the same Court that produced such triumphs of liberty as Brown v. Board, Gideon v. Wainwright, Obergefell v. Hodges and countless others.  That is to say, the Court doesn’t need reform from Congress; it has shown itself capable of internal reform, as Justices Sotomayor and Gorsuch may now be capable of enacting.

To better understand this process, one must look to historic examples of when Court reform was demanded.  In the early days of the Republic, for example, the Court’s size fluctuated rapidly, sometimes as a political action, as when John Adams and his Federalist Congress reduced the Court to five justices so Thomas Jefferson would have less influence, and sometimes to compensate for the growth of the nation, as when Andrew Jackson helped first bring the Court up to nine justices.  These changes ultimately had little effect on the genuine function of the Court, and the critical changes to the Court came from within, such as when the famous Chief Justice John Marshall established the Court as a third coequal branch of government throughout his tenure, issuing such landmark decisions as Marbury v. Madison.

A more poignant example here, comes from the 1930s when Franklin D. Roosevelt, facing heavy Judicial resistance to his administration’s New Deal policies, threatened to add six more justices of his choosing to the Court in the Judicial Procedures Reform Bill of 1937.  This precedent is applicable to today’s landscape, where perceived issues in the Court’s composition and ideological division led to calls for outright expansion of the number of justices, as would be dictated by the leading political faction of that time. This (clearly) did not happen, due to the combined efforts of a few justices on the Court, including Chief Justice Charles Evans Hughes and Associate Justices Louis Brandeis and Owen Roberts. Hughes and Brandeis, justices separated by an ideological divide themselves, united to explain to Congress how the bill intruded on Judicial Independence. Meanwhile, Roberts shifted his views (or at least his votes) to be more in line with the Roosevelt Administration and the American Public, voting to uphold New Deal legislation. These same attempts by the Judiciary to maintain independence from current political trends remains poignant today — it would be a dangerous precedent if Democrats or Republicans drastically shifted the composition of the Court each time the reins of government swapped hands.

In recent years, especially under Chief Justice John Roberts, the Supreme Court has tried to accomplish this by trying to appear as nonpartisan as possible. Many of the justices avoid the State of the Union altogether due to its political nature, which Roberts likened to a “political pep rally.” Roberts himself has repeatedly emphasized that the Court should be and completely separate from politics. In fact, the Chief Justice has said that the Court’s greatest failures have actually been when it did bend to political pressure, which further complicates the issue of current political demand for Judicial reform.

To many though, this silence and hesitance around political issues is not enough to sate the demands of those who yearn for Judicial reform, as the Court’s substantive actions, its case decisions, have massive impacts and interactions with politics. From deciding whether owning firearms is a personal right in D.C. v. Heller, to wrestling with whether a baker has the right to refuse to bake a cake for a gay couple’s wedding in Masterpiece Cakeshop v. Colorado Civil Rights Commission, the Court has been dragged into the political arena repeatedly in recent years.  With each decision, the Court evokes the ire of either side of the political spectrum.  Pundits and politicians claim the Court’s decision in one case a victory delivered by “our” justices, while another decision may be spun in the media as a calamitous setback resulting from a decision made by “their” justices. In reality though, the Court is not as partisan as it may look to the untrained eye, with Chief Justice Roberts keenly pointing out that in the most recent term only seven of seventy-three cases were decided along 5-4 partisan lines.

Sadly, if one were to limit their news consumption to cable news, they would hardly come away with the same conception as Chief Justice Roberts.  The cases that get the most attention are the controversial ones where the justices appear bitterly divided in the media, despite accounts of continuing civility of justices in public and private.  Recently, an NPR segment posited the idea that the media frequently portrays the Court as similar to sports or war, where there are winners and losers, strategies and competition; a study saw that when portrayed this way, people support the Court’s decisions less.  Such portrayals have directly led to calls for reforming the Court, as such calls logically develop from lack of belief in the legitimacy of these institutions.

Throughout his legal career Justice Gorsuch has demonstrated himself to side with conservative beliefs in a clear majority of cases and has been described as having a “libertarian streak, in that he strongly believes in individual justice.”  Consequently, Gorsuch expresses a deep skepticism of many government activities and criticizes unjust law enforcement officials accordingly. On the other hand, Sotomayor is typically identified by scholars as a liberal justice, with a particular focus on social justice reform, an ideology that also ends up with clashing with police and prosecutors due to a shared focus on individual liberties.

A notable case in their developing partnership in this area is Stuart v. Alabama, which was denied certiorari, that is, it wasn’t even allowed to appear before the Court. Justice Gorsuch filed a passionate dissent in favor of criminal justice reform, insisting that this case should have been adopted, joined only by Sotomayor.  On another occasion, Timbs v. Indiana, Sotomayor and Gorsuch seemed to lead the oral arguments together through intense questioning of the Indiana prosecutor in the case, considered to be influential in the eventual unanimous decision of the Court against criminal forfeiture1. In yet another case, Hester v. United States, Gorsuch protested against another denial of certiorari via a dissent, and was once again joined by Sotomayor as the lone dissenters this case regarding proper restitution in jury trials.

Moreover, Gorsuch has been willing to cross the Court’s aisle and be the lone conservative to stand with Sotomayor and the rest of the Court’s more liberal bloc in several cases, such as United States v. Haymond, which defended the right to a jury trial for repeat sex offenders.  The publication FiveThirtyEight has even gone as far as to call Gorsuch a new swing justice on the Court, citing his tendency to side with liberal justices like Sotomayor almost as much as he does with conservative colleagues like Roberts. Clearly, the Court is not as divided as the general public is led to believe.

Thankfully, their intellectual partnership does not stop at the bench.  Justices Sotomayor and Gorsuch have begun a campaign to restore civics education to public schools, citing their shared belief that the increasingly vitriolic partisanship in America stems from the removal of civics education from curricula in the second half of the twentieth century.  Their hope is that by improving civic knowledge, starting in public schools, the country’s divides will heal and our republic will grow healthier. Such efforts hope to bolster support in our democratic institutions and hopefully help to assuage concerns about the Court’s divisions. They have also engaged in support for a program called iCivics that provides more engaging online education via computer games and videos that teach children about government and politics.  These programs are similar to the outreach from the Court conducted by Justices Hughes and Brandeis, explaining the intricacies of the Court to Americans, except the audience is now school children rather than Congressmen (admittedly, a minute difference).

Not only will the optics of Obama and Trump-appointed justices forging an alliance on the Court improve optics, this budding partnership is likely to endure for some time. In recent years, the average retirement age for Supreme Court Justices has been 80.  Sotomayor is only sixty-five and Gorsuch is much her junior at fifty-two, so the duo has decades of viable work in front of them. Equally important, is the importance of seniority Supreme Court, for as these two ascend the ranks of the Court, they will hold greater and greater sway.  As discussed before, it is these powerful, long lasting justices that have the greatest impact on the Court.

This is an especially important time for these justices to work on bridging any ideological divide on the Courts, as many are currently warning that the coming term of the Supreme Court might be a particularly controversial one. Such a challenging term will hopefully be the Roberts Court’s finest hour, where it is able to prove to America that it can make the necessary changes itself. The Supreme Court has never needed an outside hand to guide it, and the nine justices on the Court currently are as capable as previous compositions of the Court. Justices Sotomayor and Gorsuch are certainly a duo to keep a keen eye on, and it can only be hoped that they succeed in fixing both the Court itself and how Americans see it.