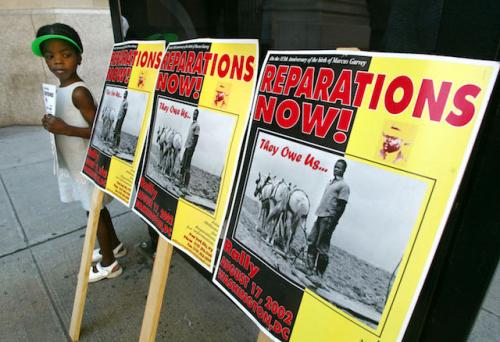 How Reparations Can Address Educational Inequities for Black American Students

While the rhetoric of a post-racial society has diminished the urgent claims for reparations, a national conversation has resurfaced. Largely because of the Ta-Nehisi Coates’s “A Case for Reparations” and the push to pass H.R. 40 (a bill to create a committee to research the impact of reparations), reparations are being reintroduced as a method for creating racial equality. Activists are also echoing the feasibility and necessity of reparations for descendants of African slaves. However, these voices are being repudiated by those that deny the reality of institutional racism. Reparations mean going beyond challenging the structures that reproduce Black criminality and considering the potential of financial reconciliation for the Black community.  Yet to be explored in the national landscape are the transformative advantages reparations would have for Black students in primary education.

The Racial Caste System in the U.S.

The dehumanization and disenfranchisement of the Black community persists in American institutions. While this reality is often contested in domestic politics, the impacts of forced labor and segregation impose clear inequities for socio-economic mobility. This can be explicitly seen in the prison-industrial complex which, according to Michelle Alexander, encapsulates more Black men today than were slaves in 1850. Critical race theorists like Alexander help the public understand that because of racially motivated policies and stratified social conditions, Black people are prevented from gaining the institutional support needed for communal success.

The classification of Black Americans in the U.S. enforces a violent and demeaning racialized hierarchy. This social order is often disputed by a “color-blind” perspective that cites Barack Obama as evidence of a racism-free society. However, the election of a single Black president did not eradicate the deeply ingrained racial biases and prejudices that motivate the continued exploitation of Black people.

In a study done at the Center for Critical Race Studies at the University of Houston-Downtown, Subramanian Shankar found that “caste cannot be transcended” and the basis of the system is to prevent true equality. In comparing American racial politics to India’s caste system, Dr. Shankar discussed “geographic exclusion” as a means of segregating communities which in turn hinders educational and labor opportunities. Through Jim Crow and segregationist policies, the contemporary United States reflects an unflinching, racialized political and social climate.

A hallmark of historical racial violence is intergenerational trauma. In a study published in the Journal of Clinical Epigenetics, researchers address what the title sums up best as “Intergenerational Resilience in Response to the Stress and Trauma of Enslavement and Chronic Exposure to Institutionalized Racism.” While the study centralizes the theme of resilience, the findings detail the harmful, holistic repercussions of the racial caste system on its inheritors. Through revolutionary fields like psychobiology and epigenetics, science now validates the racial trauma surrounding Black youth as they grapple with the violence their ancestors endured.

While struggling to compete and survive in a discriminatory educational system, Black youth battle for self-preservation all while coping with or, worse, repressing internalized trauma. Additionally, the marginalization of LGBTQ+ Black youth has increased, as the Center for American Progress has identified that they “face some of the most violent treatment in our nation’s schools.” The racial caste system formalizes institutional violence against the Black community and especially harms Black youth as they must navigate an educational system that disenfranchises them.

Contrary to racist speech attributing Black underachievement to a lack of intellectual prowess, the truth is that it is caused, in part, by the historical obstruction of Black intergenerational wealth. Alongside segregationist policies that gentrify poor communities, many Black youths are forced into lower socioeconomic statuses that coincide with the issues that impact their academic success.

Identified in a study by the United Negro College Fund, the disparities in K-12 education are results of racial prejudices. As opposed to their white peers, only “57 percent of Black students have access to a full range of math and science courses necessary for college readiness.” This is in comparison to the “81 percent of Asian American students and 71 percent of white students”  who have this educational access. Additionally, Black students are placed into honors and/or advanced placement classes at a significantly lower than other racial groups, and they are provided with less qualified teachers in their school districts.

Alongside this educational disparity, there is apparent disproportionality in the disciplinary patterns against Black students. In a report by The Brookings Institution, Black students “make up 16 percent of enrollment [but] account for 40 percent of suspensions nationally.” Due to the racial biases of the faculty, which do not reflect the diverse population of students, Black students are consistently targeted as a source for abuse and retaliation. These stark disparities in student discipline contribute to “adverse outcomes” and correlations to the school-to-prison pipeline. The “zero-tolerance” policies pervade into their everyday life, which leaves them vulnerable to be victims of a white supremacist, carceral system.

The concept of reparations is a recurring theme in Black liberation movements in the U.S. Following the abolition of slavery, formerly enslaved persons were never compensated for their abuse by the U.S. government and white Americans. The repercussions of slavery prevented the socioeconomic mobility of Black Americans and removed intergenerational wealth that could uplift the community. Today, Black Americans are reintroducing this topic into the national conversation, as the needs of the community are becoming increasingly urgent.

In ignoring reparations as a viable solution for education inequalities, society ignores the needs of Black youth that are continuously and systematically silenced. The U.S. government can and should provide reparations for Black students through: free education (from kindergarten to graduate school), subsidized housing, preferential admissions into higher education, allotted land, and stipends from the government. This would direct focus on tackling the issue of financial insecurity.  This would steer the country in a positive direction when it comes to ameliorating the racialized problems of gentrification, inequitable education, and poor health, among many others.

By focusing on the impact of socioeconomic status on the success of Black students, the U.S. government would be taking a proactive approach to this issue rather than miring us in endless political debates about the possibility of reconciliation for Black Americans.

While presidential candidates are arguing about the language and politics of reparations, their plans do not address the needs of young Black American students. With some candidates propagating this concern to secure support and votes, the disingenuous debates about reparations ignore the urgent needs of Black youth. The pressure of Black youth to work towards intergenerational wealth for their community is especially difficult with an increasingly competitive job market.

In order to enact a reparations program, the U.S. government must be honest and reflective about the nation’s racial fracture. From the enslavement of African peoples to segregationist policies that remain intact to the countless inequities in American institutions, Black Americans have tirelessly fought for their basic civil rights to exist in this country.

Many of the factors that contribute to the educational inequities for Black students can be addressed by reparations. Reparations are a systematic restructuring of how the U.S. government treats Black Americans, as it validates their experiences and actively works to remedy it. Reparations will ensure that Black youth can be given opportunities that guarantee their success.