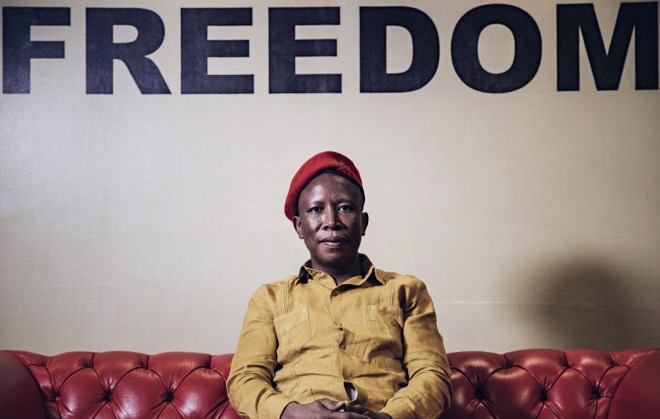 The Face of Radical African Resistance

Julius Malema, the powerhouse leader and founder of the Economic Freedom Fighters (EFF), is currently one of the most significant political firebrands in South Africa. At the age of 38, he has spearheaded the second largest opposition party to the African National Congress (ANC) and spent the last six years crafting a disciplined radical agenda for South Africa.

Born in 1981, Malema was raised by his single mother, Flora, in the township of Seshego. He grew up in impoverished circumstances and at a young age was able to witness and understand the disparities concerning socioeconomic statuses in his region. His childhood in many ways propelled his interest in the political arena. At the age of nine, he joined the ANC as part of its youth pioneer movement, where he was trained in armed resistance.

Origins of the Economic Freedom Fighters

The ANC  has been the main governing political party of post-apartheid South Africa, winning every election since the 1994 election of Nelson Mandela. At its roots, the ANC is a national liberation movement that defines its mission as the National Democratic Revolution. Socioeconomic issues stemming from colonial and apartheid South Africa serve as the fundamental focus of the ANC.

Julius Malema, however, has not had a harmonious track-record with the ANC. In 2011, he was subject to a disciplinary hearing after being found guilty of sowing divisions within the party. He was criticized of misconduct, and bringing the party into disrepute
— violating government policies.

As a consequence of those hearings, Malema was expelled from the ANC as its Youth League President in 2012. Following his dismissal from the ANC, Malema repositioned himself in the political limelight to establish a new, ambitious agenda through the EFF
— the decolonization of South African lands.

The EFF, in many ways, is a radical militant movement that focuses on the economic emancipation of Black African people. Founded in 2013, the organization has spent the last 6 years bringing together a community of activists, organizers, politicians, leaders and revolutionaries to propel its central cause: land expropriation without compensation (LEWC)

The Roots of Land Expropriation in South Africa

South Africa has a history of colonial conquest that relegated the Black majority into crowded urban and rural reserves. The 1913 Native Lands Act made it illegal for Black Africans to acquire land outside of these reserves, which became known as “Homelands”. Meanwhile, Black Africans account for 80 percent of South Africa’s population, these homelands comprise just 13 percent of the land. Under apartheid, eighty-five percent of South African land was reserved for white people, who then accounted for an estimated seventeen percent of the population. For many Black South Africans, it is unconscionable that the white minority owns 72 percent of the agricultural land, while the Black majority owns a mere 4 percent. The EFF seeks to address these concerns and take back the majority stronghold on these lands.

In the fight for Black liberation, the most significant notion Julius Malema has recognized is that political power does not translate into economic power. Although the ANC currently holds a Black majority congress, the party’s diversity has not led to a parallel rise in economic equality for Black South Africans. An increase in racial representation — and voting power — for Black South Africans has not brought forth equal economic power to those Black voters.

The EFF believes that the fundamental key to land reclamation is to infuse economic power back into marginalized Black South African communities whose indigenous lands were robbed and stolen under a suppressive colonial white apartheid regime. Land ownership is the backbone of economic prosperity. Malema and the EFF seeks to provide economic restitution to combat the negative consequences of apartheid such as the stripping of voting rights and citizenship of Black Africans and the institution of inhumane segregated living conditions modeled after U.S. Jim Crow system.

Malema expressed to a crowd in Soweto, “White people will no longer eat alone, we are coming to sit on the dinner table, and if you are refusing us on a dinner table, we are going to destroy that dinner table. No one is going to eat until all of us in South Africa eat from the same dinner table. That’s what we are fighting for.”

A Reclamation and Decolonization of African lands

Reclaiming South African lands is central to the EFF’s plan to empower Black Africans. Malema believes that this task can be achieved through the expropriation of land without compensation from white landowners. Malema is working to dismantle white ownership in South Africa. “Why are the farm owners white only?” he said. “When we say economic freedom, we mean Black people own productive farms.” Malema seeks to gain economic emancipation for Black people through majority land ownership and the redistribution of white-owned land. To address this issue, Malema and the EFF strive for the creation of the LEWC, a system which centers itself in the confiscation of white property without any reimbursement.

Malema explains that the LEWC will work as follows: “The land council will be created, and to settle any disputes, we will then have a land ombudsman. If you’re not happy with the ruling of an ombudsman, there will be a land court with no less than 10 judges so that they can deal with land disputes. . .We will cut out the cabinet — positions like deputy ministers — in order to fulfill these promises of jobs, houses, land and so on. We need to deal with the corrupt officials to achieve this, first.

Power and liberation do not exist for Black folk without ownership of  property. Within Malema’s core philosophy, he challenges the idea of being able to claim a homeland without land ownership. He argues that it does not make sense for Black people to not only live in, but protect and care for, spaces owned by the white man.

A socioeconomic redress is needed for Black South Africans who have been systematically oppressed for generations in their own homelands. LEWC is a solution to the consequences of colonization and apartheid within South Africa. The journey in this effort is an enduring one. Nevertheless, the goal is decolonization: taking back lands that were previously stolen by European colonizers without giving any compensation to those white landowners. It is about redistributing land and wealth back into the hands of Black Africans — reclaiming something that was stolen. It is about providing the ownership needed for Black Africans to make a substantial claim to South Africa.

Julius Malema and the EFF are creating a nexus of resources targeted towards Black South Africans for their economic emancipation and eradication of imperialist domination. There are no apologies to be made to white people in South Africa. Black people no longer feel the need to wait for justice. Economic restitution and empowerment is the ultimate goal. There is a movement that must be seen and heard within the African continent that prioritizes Black liberation. This liberation is restless, demanding and ready to thrive.