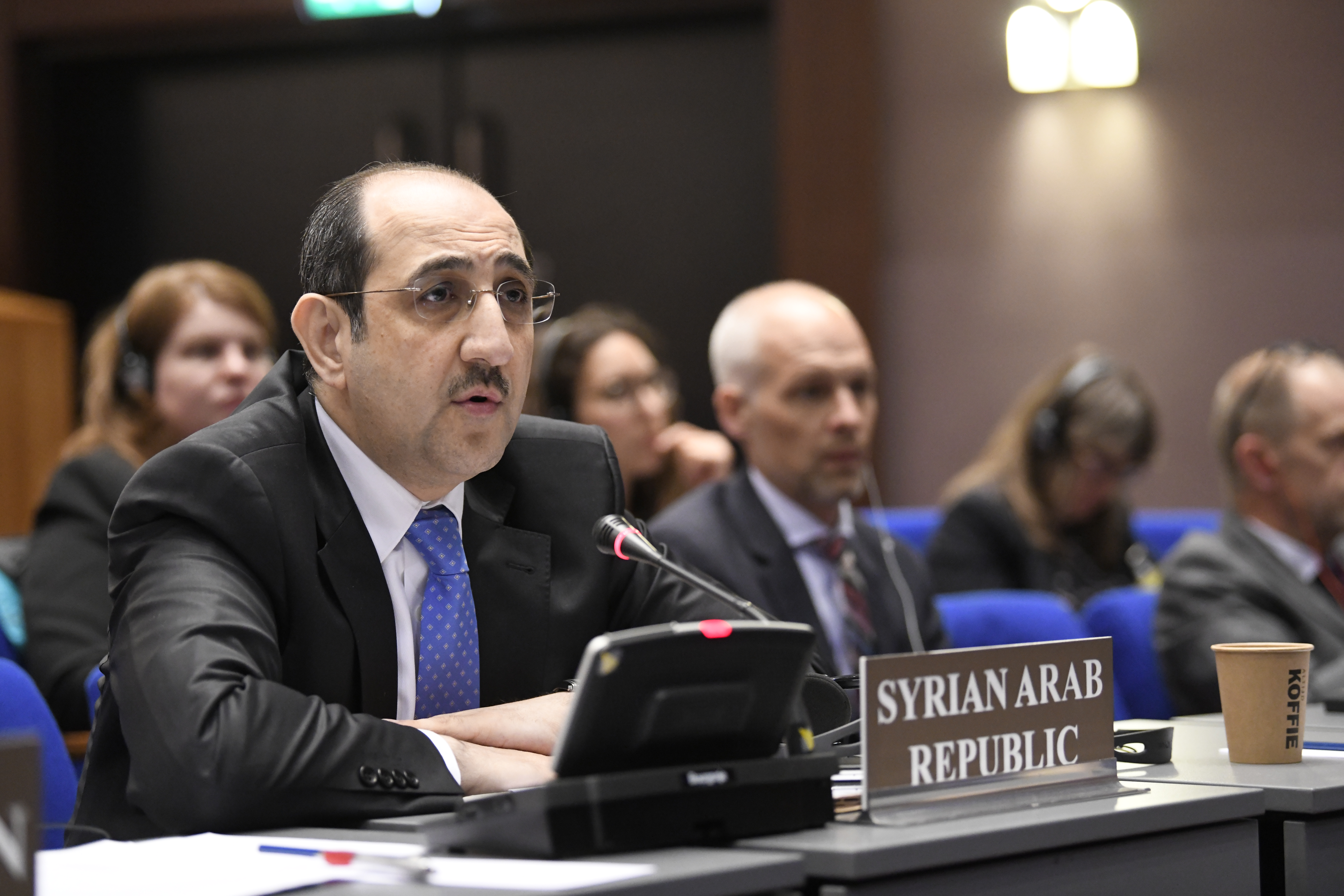 Accusations of war crimes far predate the international law that defines those crimes; the first recorded international trial for war crimes occurred in 1474, while formal international law on the subject was only promulgated in the 1890s. Of course, once the concept of a war crime emerged, the exploitation of war crime accusations for political gain followed. States had an incentive to use these accusations to demonize their opponents, whether for domestic propaganda purposes or to shape international opinion; even if the accused crimes did occur, they can be politicized. In the course of the Syrian Civil War, the sheer number of outside powers attempting to promote their own regional interests and the fragmentary nature of media access has led to the dissemination of propaganda from all sides and made it unprecedentedly confusing to separate truth from fiction. In particular, every side of the conflict and every external power that has chosen a side has a different explanation for the use of chemical weapons in Syrian cities beginning in 2013.

The first alleged chemical attack in Syria occurred in March 2013, in the Khan al-Assal district of the city of Aleppo. Even as the story was reaching international media, accusations and recriminations from government and rebel forces were proliferating. Media attention greatly increased after a more devastating attack in August of that year in Ghouta, a suburb of Damascus. The Syrian government had already confirmed the existence of a chemical weapons program in 2012, and thus its initial statements after each attack accused rebel groups of carrying out a false-flag attack. Following the Ghouta attack, the United States and France indicated that they were considering airstrikes against Syrian regime forces, resulting in a hurried diplomatic process launched by Russia. This process rapidly produced an agreement, with Syria submitting to inspections from the Organization for the Prohibition of Chemical Weapons (OPCW) and agreeing to destroy its chemical weapons stockpiles. OPCW certified the completion of this process in October of 2013.

Throughout 2014 and 2015, opposition groups continued to make allegations of further chemical weapons use, often alleging the use of chlorine gas in particular. Sarin, the nerve gas implicated in both of the major 2013 attacks, requires significant chemical engineering capabilities and particular feedstock chemicals, while chlorine is used for a range of legitimate industrial purposes and is thus more easily obtained and not as tightly controlled by the OPCW. On April 4, 2017, another major chemical attack occurred in Khan Sheikhoun, a rebel-held town in the northwest of the country. This attack is believed to have used sarin, and estimated death tolls ranged between 90 and 1700. Following this incident, the United States executed a cruise missile strike on a Syrian government airfield thought to have been the base for the attack.

All of the important facts missing from the account above — most notably, the identity of the party or parties responsible for the attacks — are still hotly disputed. In fact, early statements after many of the attacks contradicted more basic details that are now accepted, with Syrian government sources often denying that bombings occurred at all. The publication of findings from multiple UN investigative bodies and the OPCW has not quieted the debate in some corners, although it has made it possible to divide the entities involved in the debate into those who accept the conclusions of these investigations and those who reject them.

The most notable critic of the UN and OPCW investigations is Russia; in addition to questioning the conclusions once they were produced, Russian government figures repeatedly blocked initial efforts by the UN Security Council to launch investigations and denigrated the trustworthiness and impartiality of the investigations before they produced results. The Syrian government has been equally vocal about condemning Western explanations but has often indirectly contradicted Russian statements. After the Khan Sheikhoun attack, the Syrian government alleged that the attack had been fabricated by the United States to provide a pretext for airstrikes, but Russian statements days later claimed that an airstrike on opposition-held areas had hit a storage facility for chemical weapons.

More interestingly, varying forms of these “alternative” explanations have been taken up by political and intellectual figures in the United States, often in conjunction with a general skepticism of U.S. aims in Syria. The release of the OPCW report quieted some of the speculation among Western scholars, but those findings have not been universally accepted. Of the dissenters, Theodore Postol is the most notable figure; an emeritus professor in nuclear engineering at MIT, he has been noted for his criticism of U.S. claims on the effectiveness of missile defense technology and for other skepticism of national security policies. The publication of Postol’s recent findings on the Khan Sheikhoun attack triggered a fierce academic discussion which has not yet been resolved.

Postol’s work has been enthusiastically repeated by Russia Today and other Russian state media organs, but has also been unexpectedly embraced by Tulsi Gabbard, one of the more obscure Democratic presidential hopefuls. This, and Gabbard’s other unconventional stances on Middle East policy, have generated a certain measure of media speculation, but more mainstream political figures, such as U.S. Representative Ron Paul, have also expressed skepticism at initial claims of Syrian government responsibility. Paul, for his part, accused American neoconservatives of faking the attack. At any rate, belief in the “unconventional” explanation for the chemical attacks is clearly not limited to the Russian and Syrian governments.

A full technical analysis of the various claims made on both sides is well beyond the scope of this article. The OPCW’s information pages on the investigations in Syria are extensive and are recommended reading, but the Russian and Syrian claims are more fragmentary. There is, for understandable reasons, no official and permanent record of these governments’ statements.

Taking the Khan Sheikhoun attack as the most prominent example, Russian and Syrian statements appear to have been calculated to cast as much doubt as possible on the “official” explanation, not to prove a particular alternative scenario. The OPCW report concluded that the attack was conducted using a sarin-filled aerial bomb; statements in response proposed that the source could have been an IED detonated on the ground by opposition fighters, questioned the eyewitness evidence from first responders and medical personnel that first indicated the use of chemical weapons and began to lambast the international investigation well before it had been approved.

On several levels, these claims are fully in keeping with other Russian attempts to defend the Syrian government from international criticism and to fend off attempts by the UN and others to take action, but they also serve as broader deflections. Impugning the credibility of international organizations in general and alleging undue influence by the United States is closely in line with Russian efforts to deflect criticism of the country’s own human rights record, and accusing the West of fabricating Syrian chemical attacks as an excuse for regime change is an attempt to insulate Russia from criticism for its own actions in the Middle East and Ukraine.

The fact that Russian and Syrian actions after the 2013 attacks — especially the willingness of both countries to immediately enter negotiations — indicate Syrian government culpability is irrelevant at this point. Both countries aimed to resolve the issue quickly to avoid greater Western involvement, but given the later chemical attacks in 2017, there is no way of knowing whether negotiations at the time were even sincere; they may have been just another ploy along with the wild conspiracy theories put out by Russian news. In essence, this only goes further to show that international politics is becoming a post-truth environment, something that was realized about national politics some time ago.

As heinous as the use of chemical weapons in Syria was and remains, the media and diplomatic frenzy after the 2013 attacks was about far more than the attacks themselves. The denials were not simply self-serving attempts to escape accountability; they should be recognized as one of the first salvoes in Russia’s continuous war of influence, information and media against the West.