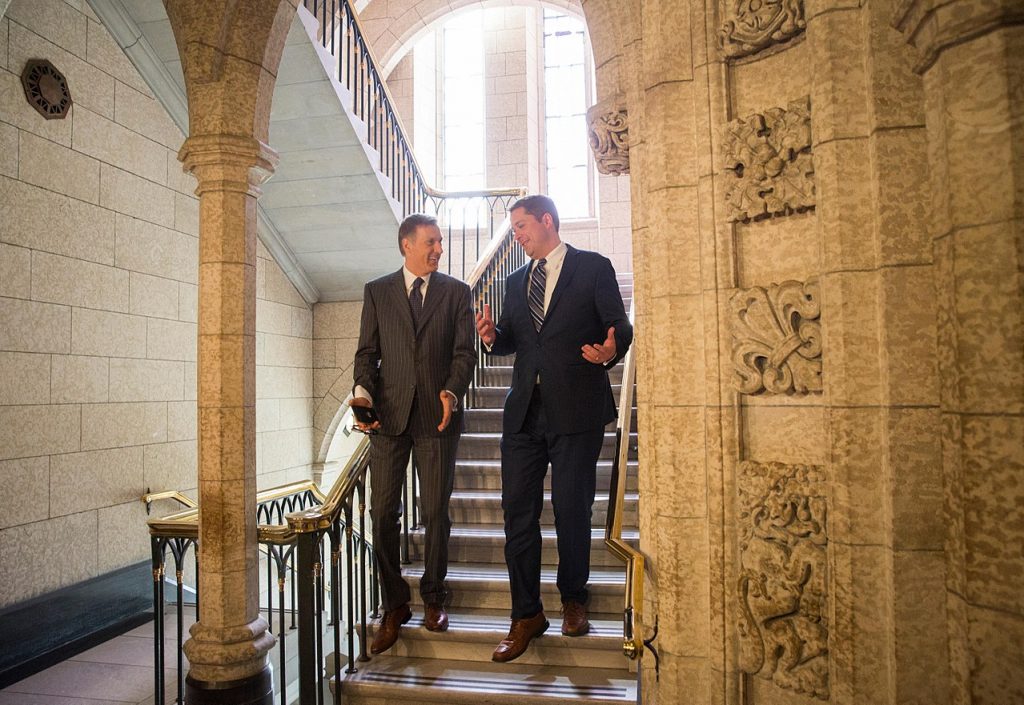 He has repeatedly called climate change a “hoax” perpetrated by “environmentalist alarmists.” His immigration policy includes building border fences, restricting family reunification, and making temporary foreign workers less competitive. And he spends much of his time railing against “the Liberal cult of diversity” on his Twitter account, a platform he uses to comment on — and cause —daily controversy.

His name is Maxime Bernier, and he’s running for Prime Minister in Canada’s October federal election.

An MP from the province of Quebec, Bernier abandoned the Conservative Party in 2018 and struck out on his own to form the right-wing People’s Party of Canada. In announcing his decision, he criticized Conservative leadership, especially opposition leader Andrew Scheer— the man who defeated him for the leadership position in 2017. Bernier has been a vocal critic of Scheer, accusing him of veering too far left in working with Prime Minister Justin Trudeau’s Liberal Party, and has promised to take Canada in a different direction with his new political movement. Among his colleagues (as well as his fans on the far-right corners of the internet), he’s affectionately known as “Mad Max.”

But despite Bernier’s best efforts, his party is polling in the single digits, and the race for Prime Minister is still very much a two-way contest between Scheer and Trudeau. While right-wing nationalism has recently taken hold in many western-style democracies — including but not limited to America, Britain, France, India, Brazil, the Netherlands, and Italy — populism in Canada has largely failed to get off the ground. Much of this has to do with the left-wing lean of the Canadian electorate, but Canada’s resistance to populism is also deeply tied to the simultaneous success of populism in the United States.

Low polling hasn’t stopped the People’s Party from taking the race seriously. The party has nominated candidates to run in all 338 federal districts in the fall election, and after meeting polling qualifications, Bernier was officially invited to the October debates with the other major party leaders. Some in the media have complained that the People’s Party, which is polling at an average of three percent, is being treated with “kid’s gloves” by the nonpartisan election commission.

There have also been numerous complaints from Conservatives that Bernier’s candidacy may “divide the right.” Bernier has responded by saying that he intends to primarily reach out to disaffected voters who don’t support any party — a strategy used by the Trump campaign and the Brexit movement alike to tremendous success.

Yet while some commentators have rushed to classify Bernier in the same category as Donald Trump, Nigel Farage, and the rest of the global populist movement, the truth is somewhat more complicated. The realities of Canadian politics make it nearly impossible for someone with far-right views to win a federal election. The Conservative Party that Bernier abandoned is the country’s mainstream right-wing bloc, but even the Conservatives would likely be considered center-left in the United States.

In Canada, the Overton window — or the range of ideological positions that are considered “electable” in a given political context — skews more to the left than in most other western-style democracies. As a result, Bernier has been forced to moderate his message in a number of unique ways. He calls this style of politics “smart populism”— a fusion of Trumpian rhetoric with Canadian liberal values. But despite this moderation, Bernier is still failing to gain momentum in the polls.

It would be impossible for Bernier, a Quebecois who speaks English with a thick French accent, to convincingly come out against diversity and pluralism. His Twitter feed is filled with polemics against the Liberal Party’s “obsession” with multiculturalism — even while each comment is accompanied by a duplicate Tweet with French translation. In order to reconcile his ideological leanings with the reality of a diverse Canadian electorate, Bernier has chosen to stake out a middle ground, arguing for diversity and inclusion on the condition that new immigrants assimilate and embrace Canadian values.

Even so, this is the first time Bernier has truly had to contend with Canada’s multicultural electorate — his district of Beauce in Quebec is the most homogeneous in the country, with over 99% of voters identifying as white or Caucasian.

In online ads and billboards, the People’s Party routinely contrasts its diversity-through-assimilation position with that of Justin Trudeau’s. Despite recently becoming embroiled in a racially charged blackface scandal, Trudeau is known in Canada for championing racial equality, increased immigration for asylum seekers, and multiculturalism. In 2015, Trudeau said that Canada could soon become “The first postnational state,” adding that “there is no core identity, no mainstream in Canada.”

While this earned some plaudits from the left, Bernier and other right-wingers were quick to pounce on Trudeau’s language, calling the statement a radical embrace of globalism and multiculturalism — a push for diversity at the expense of what makes Canada unique. But although Bernier often mirrors the rhetoric of other populist movements worldwide, he still encourages immigration for those fleeing persecution abroad. The People’s Party’s platform supports bringing tens of thousands of migrants into Canada each year.

One message that Bernier hasn’t moderated on, however, is climate change. Even while 40 percent of Canadians view the prospect of global warming as a threat — and 70 percent say they would support a “Green New Deal” for Canada —Bernier is the only major party leader to deny anthropogenic climate change. In a recent controversy, he referred to Swedish climate activist Greta Thunberg as “mentally unstable” — comments he later walked back. If one were trying to find the reason behind the failure of Bernier’s populist movement, this disconnect between his policy and the electorate would appear to be a prime candidate.

But according to Steven Newton, a Berkeley graduate and geology professor at the College of Marin, Bernier’s climate position may be better-calculated than it seems.

Though Canada has an environmentalist streak, it is also one of the top oil producing countries in the world, and the exploitation of its natural gas resources and tar sands have created thousands of jobs and put the country on the path to energy independence.

Those jobs, however, come at a price. “The tar sands are horrible for the environment,” says Newton. “They’re incredibly inefficient; it’s like trying to suck asphalt out of rock. Some studies say that for every two barrels of oil generated by the Canadian tar sands, another barrel of oil is used up. Using petroleum to make more petroleum is the worst possible thing from an environmental perspective.”

The upshot of this reality — an environmentally friendly electorate that relies on an environmentally catastrophic industry — is that many MPs acknowledge the existence of climate change while endorsing tar sand exploitation. Even Trudeau, a supposed environmentalist, advocated for the controversial Keystone XL pipeline in 2016 while US interests were divided over it. Instead of accepting the danger of climate change and nevertheless refusing to mitigate the results, Bernier has chosen to simply deny it outright. In doing so, he may be banking on the possibility that Canadians will put their economic well-being before environmental issues — a gamble that is not without precedent.

But while Bernier is attempting to replicate the slide to the populist right that affected the United States and Britain in 2016, he’s coming up short. Most estimates agree that his party has little chance at winning more than three seats in the coming election, and even with a moderated populist message, the People’s Party routinely places last in the polls. Why, if this style of politics is sweeping the western world, should Canada be exempt from this trend?

There are a few obvious answers. Firstly, Bernier’s party lacks the infrastructure and electoral presence to mount a substantial challenge in this race. Secondly, despite his moderate message, he remains a bad fit for the Canadian electorate. But despite these structural problems, the failure of populism in Canada may not solely be tied to various hot-button social issues. Bernier’s failure to catch on has much to do with his counterpart south of the border.

One of President Trump’s key positions in the 2016 election was the renegotiation of NAFTA, the free trade agreement between the US, Canada, and Mexico signed by Bill Clinton in the 1990s. This agreement, which many blame for the acceleration of job losses in the Midwest, broke down trade barriers between all three nations in various sectors of the economy. But while this grand plan for free trade was being implemented, the Canadian government insisted that its agricultural tariffs would remain on the books. To this day, the Canadian dairy and poultry markets are governed by supply management laws, which control prices and help to ensure that Canadian farms remain profitable.

Steven Vogel, a professor of Political Science at UC Berkeley, has spent much of his career analyzing the pros and cons of free trade. “There are almost always gains to be made from trade,” said Vogel. “But there are also drawbacks. One exception is in the face of a massive economic transition. Tariffs can be used to ride out an external shock to the markets.”

Indeed, if Canadian agricultural tariffs were suddenly removed, the influx of cheaper American products could wreak havoc on the nation’s farms. The plains provinces of Alberta, Saskatchewan, and Manitoba have especially large agricultural sectors, all of which could be decimated if Canada adopted free-trade policies quickly.

Trump has repeatedly attacked Canada’s agricultural policies in his multi-front trade war, a strategy which has made him historically unpopular north of the 49th parallel. The Canadian response has been less than conciliatory, and Trudeau has found himself forced to play hardball with his American counterpart.

“Folding does not look good for a politician domestically,” said Vogel. “Any agreement [Trudeau and Trump] reach has more to do with the power of the US than anything else. Canada is very dependent upon the US economy.”

Because of this, Trudeau has made some concessions on trade. But for any country, capitulation has its limits. “When farms start shutting down,” said Vogel, “that’s when it gets political.”

In the face of an external threat to the agricultural tariffs, Canada’s Liberal and Conservative leadership joined forces in raising tariffs to counteract those levied by Trump (which, incidentally, is the exact move that caused Bernier to exit the Conservative Party). This has not been limited to economic policy– Prime Minister Trudeau has often denounced Trump’s style of politics as divisive and racially charged.

A free-trade ideologue, Bernier has advocated for the end of agricultural lobbying in Ottawa, as well as the removal of Canada’s supply management laws. This has left the rural agricultural base of the Conservative Party mostly out of his reach, as farmers rely on these regulations to maintain their livelihoods. And by siding with the unpopular Trump in calling for a removal of Canadian trade barriers, the People’s Party looks very friendly to American interests at a time when American interests have never been less popular.

In Vogel’s words, “[Bernier’s] position is very much in line with American libertarians… But even if a politician wants free trade, that’s no guarantee that their constituents do.”

Both in rhetoric and in policy, Bernier has thus tied himself irrevocably to Donald Trump. To many Canadians, he looks as if he is capitulating to Trump’s demands, and his movement is suffering because of it. Right-wing populism, however moderate, is unlikely to take root in Canada so long as a foreign right-wing populist routinely attacks the country’s leaders and economic policy.

This isn’t to say that Bernier will never see electoral success in Canada. It’s not outside the realm of possibility that his party could one day succeed in shifting Canadian politics to the right — but if this style of politics is to rise in Canada, it may first have to fall in the United States.