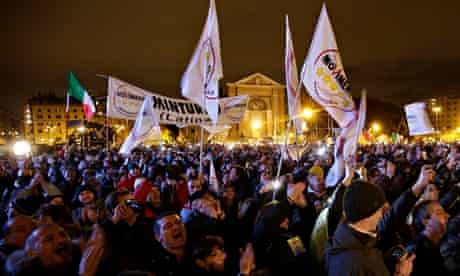 The Evolution of Italy’s Five Star Movement: From Populist Firebrands to Establishment Gatekeepers

“Mussolini was less brash, at least he called his coup a coup!” thundered comedian-turned-politician Giuseppe “Beppe” Grillo. This attack from a 2015 blog post concerned then-Prime Minister Matteo Renzi’s proposed referendum on election reform. The inflammatory language used was par for the course for Grillo. His party, the Five Star Movement (M5S), had recently entered the Italian Parliament on a wave of anti-establishment fervor, vowing to bring down the old political guard and the business interests that controlled it. Over the next few years, the political winds seemed to blow in its favor: for instance, the party led the effort to defeat the referendum, forcing Renzi to resign as Prime Minister. As a result, the 2018 Election saw the M5S become the senior partner in an anti-establishment coalition with Matteo Salvini’s far-right League party.

Yet just over a year later, the coalition fell apart. M5S then did a complete turnaround by allying with Renzi’s establishment Democratic Party (PD) through a series of backroom deals. Much of the political commentary that analyzed this remarkable turn of events framed it as a marriage of convenience motivated by nothing more than a mutual desire to remove Salvini and the League away from power. In fact, The New York Times described this development as “New Government Takes Shape in Italy, Sidelining Salvini and the Hard Right”. This analysis, however, overlooks the substantial transformation the M5S has undergone in its brief ten-year existence. Delving into its metamorphosis as a party not only explains why this move towards the establishment was inevitable for the M5S but also provides an interesting case study for the future of the populist movement in Europe.

The structure of the M5S is unlike that of any other major party. From its inception, huge efforts were made to move beyond career politicians, prevent corruption and promote its populist philosophy. In order to do so, the party imposed term limits on itself, required candidates to refuse campaign contributions and made party decisions and nominations through an online forum. The fact that M5S not only “talked the talk” on upending the political class but also showed it was willing to “walk the walk” attracted many voters. As pointed out by Italian satirist Mario Cardinali in Politico Europe, “The other parties find the M5S scandalous because it contradicts everything that has come before it.” However, as the party became established, the incentive to grow its voting base began to clash with the party’s original founding ideals and principles. The party’s online voting system, universally lauded for its potential to reinvigorate direct democracy, no longer was the primary driver of policy. For example, despite the overwhelming support of its party members, M5S did not back the 2014 gay marriage legalization bill. This move was widely seen as an electoral ploy to attract conservative Catholic voters. By 2017, Beppe Grillo himself stepped down as party leader, which, as reported by The Local Italy, “will enable the M5S to extend its support from pure protest voters to those needing to be persuaded, through its leaders’ profiles, of its potential governing competence.” These moves may have increased the M5S’s short-term electoral prospects but depleted the party’s ideological core, beginning to detach the policymakers from the populist base.

The 2018 Parliamentary Elections at first seemed an unmitigated success for M5S. The party doubled its seats, ousted the hated PD from power and looked set to govern. However, due to Italy’s proportional voting system, it required another party to join with to form a coalition government. M5S’s heated rhetorical war against the establishment left Matteo Salvini’s League Party as its only choice. While the two parties were never seen as a natural fit – for instance, their electoral bases came from very different regions – their shared desire to enter government for the first time meant an agreement was eventually made. With this coalition in hand, it seemed everything M5S had fought for the last nine years would finally be put into action. However, it was the beginning of its decline.

M5S’s policy of replacing its populist ideology with vote-capturing maneuvers meant it lacked the cohesion necessary to lead the country or even maintain consistent messaging.  Although M5S commanded two-thirds of the coalition’s seats and its nominee, Giuseppe Conte, was now the Prime Minister, it was Salvini who stole the headlines through his anti-immigrant work as Interior Minister. By the European Parliamentary Elections in May of 2019, the parties popularity had flipped, with the League now making up two-thirds of the coalition’s support. However, this moment of great crisis for M5S laid the groundwork for it to bridge its divide with the establishment.

The rise of Salvini shifted the establishment’s perspective of who was “too radical” to work with. The M5S’s rhetoric of cracking down on corruption now seemed palatable compared with Salvini’s goals, which included pulling Italy out of the Eurozone. From M5S’s perspective, the loss of support originated primarily from the right-wing and Anti-EU voters it had previously courted; without these polarizing factions, M5S’s base became more cohesive. Additionally, M5S’s alliance with Salvini had caused the party, and by extension Prime Minister Conte, to be sidelined in EU decision-making bodies. These bodies had the power to distribute critical funds that debt-plagued Italy needed to deliver M5S’s policy promises.

By August of 2019, Salvini felt comfortable enough in his position to announce his intention to end the coalition government and called for snap elections. However, negotiations behind the scenes between M5S and the PD, directed by ex-Prime Minister Renzi, led to the early election bill being defeated. This was quickly followed by M5S and the PD coming to their own coalition agreement, officially ousting Salvini from power.

In the weeks that followed, the new government has been showered by pledges and concessions by EU institutions and member countries. For example, a temporary migration pact was signed on September 23 to help Italy manage the burden of Mediterranean crossing, with an EU-wide deal in the works. As AFP reports, “A successful European migrant agreement would be a blow to Salvini, showing that cooperation gets better results than confrontation.” These olive branches show that not just the Italian establishment but also the EU now view M5S as a partner instead of an enemy.

The story of the M5S is one that populist parties across the EU should pay attention to. The attempt to abandon core beliefs in order to appeal to new voters meant it was unable to stop a right-wing demagogue from becoming mainstream. While it eventually managed to remove Salvini, at least for now, it did so by allying with the very establishment it was founded to fight against. On top of that, the manner that the new government came about was through the shady backroom deals M5S’ structure was supposed to prevent. However, it is once again in the driving seat, this time with the backing of the EU instead of its opposition.  The M5S now must quickly show that it is possible to enact its reformist agenda by working with the system. If it fails to do so, it is only a matter of time before it becomes part of the corrupt establishment that new populists will rail against.