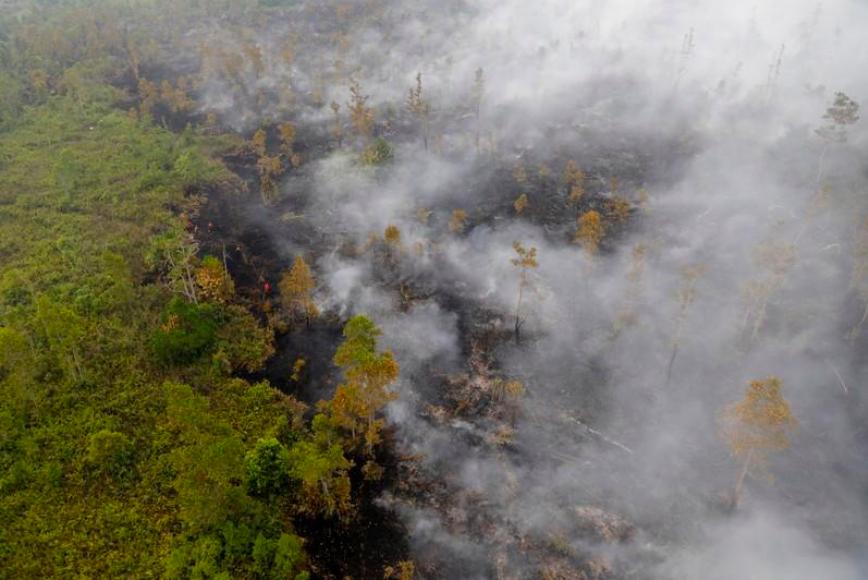 While the Amazon forest fires take center stage in environmental reporting, the fires that annually engulf the Southeast Asian rainforest have drawn little attention. As of mid-September this year, more than 320,000 hectares burned primarily in the Kalimantan region of Indonesia. The fires will continue until the wet season, beginning between late October and mid-November. Smog from the fires spread across Indonesia to neighboring Malaysia and Singapore, causing an AQI of over one thousand in some areas and the closure of over six hundred schools across Malaysia. In addition to worsening deforestation and carbon emissions, the fire threatens a variety of endangered species, including the Sumatran tiger, rhino, and orangutan.

Most actors in the area, including Indonesia’s governmental agencies and President Joko Widodo, acknowledge the cause of the fires is the use of slash-and-burn techniques to clear land for agriculture. This technique involves cutting down existing vegetation before burning the land. Although the pulp and logging industry are also largely responsible, Indonesia is the world’s largest producer of palm oil, which is the industry most targeted by environmentalists. Palm oil plantations cover twelve million hectares of what used to be rainforest. Due to the fires’ detrimental environmental and health impacts, President Joko Widodo put a temporary moratorium on granting licenses to clear forest and peatland in 2011. As of July this year, the ruling is permanent. Despite the government’s attempts to crack down on illegal agricultural burning, the fires persist. This is directly due to the failure to act by the President and Indonesia’s Ministry of Environment and Forestry.

Although the government has upheld the moratorium, deforestation due to fire is the highest it has been since 2015. The policy primarily a response to the growing international criticism of Indonesia’s inaction rather than genuine concern, as it is both limited in scope and contains several loopholes. It only applies to land controlled by the Ministry of Environment and Forestry, excluding land controlled by regional governments and forest that has already been conceded to corporations. It also specifically excludes secondary forests, meaning millions of hectares of already cleared forest will be unable to recover. Furthermore, there are no stated penalties for the unlicensed clearing of land or for local governments that grant licenses despite the presidential decree. According to the Ministry, the rate of deforestation in the area covered by the moratorium has decreased by thirty-eight percent since it was instituted. However, the data shown below recorded by Global Forest Watch contradicts this claim showing an increase in both tree cover loss in region and overall fire alerts in the country.

Not only does the policy lack strength, but the government also failed to prosecute implicated corporations. According to Rasion Ridho Sani, the ministry’s director-general for law enforcement, enforcement has previously focused on bringing offenders to civil court and placing companies on administrative sanctions. This year, he claims, they “are using criminal instruments more intensively.” This may be true in the case of offending individuals, as approximately 185 people have been arrested in connection with the fires. As of September 16th, according to National Police spokesman Dedi Prasetyo, twenty-three of those investigations were assigned to prosecutors, and forty-three more will be tried. However, while the government has been fairly quick to investigate and charge accused persons, it continues to rely on sanctions to punish accused corporations. These sanctions can include either fines or loss of concessions and licensing. Since 2015, only financial penalties have been leveraged, and an equivalent of 1.2 billion USD in fines are unpaid. Not a single sanctioned company has paid its fines in full. This year, Sani, claims to have sanctioned sixty-four corporations, twenty of which are foreign. Consistent with previous years, the ten companies owning the concessions with the largest burned area, are not included.

Most importantly, Sani has announced criminal investigations into several palm oil companies. However, he chose to identify them only by their initials. Originally in mid-September, three companies were announced, with the initials AER, APB, and SKM. By October 2nd, companies by the initials AUS, NPC, and IGP were also identified as suspects. Five of the six suspect companies are confirmed to be either Malaysian or Singaporean. The lack of specificity in the government’s announcement makes it impossible to know how much land these companies have cleared and the amount they have made from doing so. It is also difficult to detect any corruption surrounding the issue and to determine why these six companies were chosen as scapegoats.

With the identities of the offending corporations obscured, accountability is forgotten, and it cannot be expected that this will curb intentional burning in the future. While individuals were charged as criminals, major corporations continue to face only civil actions. As with many large corporations across the world that have committed atrocities, civil suits have been ineffective. To protect Indonesia’s rainforests, as well as the health of its citizens and the surrounding populations, the Indonesian government must bring criminal charges against the leaders of offending agricultural companies and be transparent in their investigations. They have an obligation to the citizens being harmed by these recurrent natural disasters to publish the results of these investigations and  publicly name those responsible for the destruction of Indonesia’s rainforests.

Rachel Rombardo
More from The ReviewMore posts in The Review »