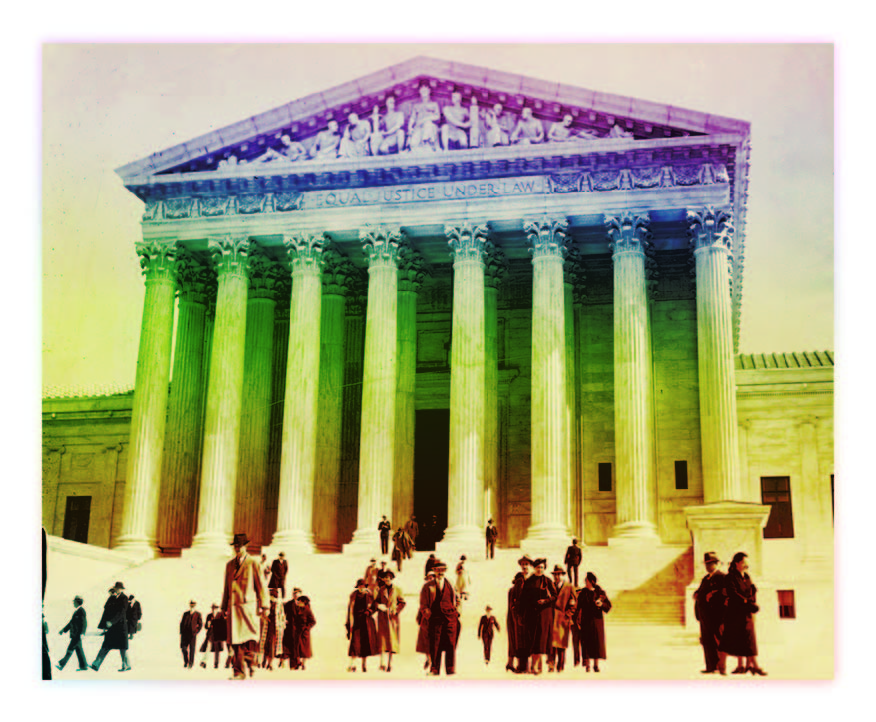 Aimee Stephens was fired from her job. A hardworking, loyal employee of Harris Funeral Homes, she had professionally executed her job for more than 6 years. Why then, was she dismissed? Because she, in fact, was born a he.

When Ms. Stephens finally had the courage to come out to her boss, she was fired immediately, solely for daring to embrace her gender identity. She sued, and now her fate, along with that of countless others, rests in the hands of the Supreme Court.

This is only the newest development in a long-raging campaign for LGBTQ equality. In 1979, Washington D.C became the site for the first National March on Washington for Lesbian and Gay Rights. Generating a crowd of approximately 75,000 to 125,000 individuals, the March embodied the idea that everyone deserves the same rights, regardless of sexual orientation or gender identity. Forty years later, the LGBTQ community has taken large strides in bridging the gap between the rights of members and non-members. On June 26th, 2003, the Supreme Court struck down anti-sodomy laws and allowed full homosexual expression at home in the case Lawrence v. Texas. On June 9th, 2015, the military took steps to allow gay and lesbian individuals to serve their country. And finally, on June 26th, 2015, in Obergefell v. Hodges, the Court required all states to permit same-sex marriage. Although progress is slowly being made in the LGBTQ movement, one domain of rights is currently in contention at the Supreme Court: the workplace.

Title VII states that “it shall be an unlawful employment practice for an employer…to discriminate against any individual…because of such individual’s race, color, religion, sex, or national origin.” The key contention is whether the inclusion of “sex” protects those of different sexual orientations and transgender individuals.

This split is starkly visible in federal circuit courts. On April 4th, 2017, Kimberly Hively sued Ivy Tech Community College on the grounds of Title VII when it denied her employment. On appeal, the Seventh Circuit Court ruled that Title VII protected individuals based on sexual orientation, breaking from an Eleventh Circuit Court ruling on a similar case stating that it did not. These “circuit splits” caught the attention of the Supreme Court. In order to establish national legal uniformity, the Court granted certiorari to 3 cases. The first one, Harris Funeral Homes v. EEOC, pertains to Aimee Stephens, who was fired because she dressed and behaved as a woman despite being biologically male. The second and third cases, Altitude Express v. Zarda, and Bostock v. Clayton County, are combined for their similarity, as both raise questions on whether being gay or lesbian is protected from employment termination under Title VII.  The questions granted were heard on October 8th.

In terms of its final verdict, Supreme Court precedent favors expanding Title VII protections to sexual preference and identity. In 1998, in the case Oncale v. Sundowner Offshore Servs., the Supreme Court ruled that same-sex harassment is sex discrimination as included in Title VII. Justice Antonin Scalia, a notable conservative, highlighted that while harassment based on sexual orientation was, “not the principal evil Congress was concerned with when it enacted Title VII…statutory prohibitions often go beyond the principal evil to cover reasonably comparable evils…Title VII prohibits ‘discriminat[ion]…because of…sex. [This]…must extend to [sex-based] discrimination of any kind that meets the statutory requirements.” Furthermore, with regards to gender identity, in Glenn v. Brumby in 2011, the Eleventh Circuit held that a person is transgender “precisely because of the perception that his or her behavior transgresses gender stereotypes,” therefore there is a connection between discriminating against transgender individuals and on the basis of “gender-based behavioral norms.” This suggests that the prohibition of discrimination on the basis of sex encompasses that of the kind that discriminates against those of a traditionally non-conforming gender identity and can be cited as convincing precedent by the Supreme Court.

However, there is the possibility of overturning such precedent. Many, including Judge Diana Sykes, who was once a top contender for the Supreme Court under Trump, have argued that although they believe in equality for all members of the LGBTQ community, it is simply not the case that sex as stated in Title VII entails sexual orientation and gender identity. Sex, they stress, is defined as the biological assignment of gender at birth, completely separate from whoever one is attracted to or which gender one later on chooses to identify as. They are wary of the Supreme Court ruling in such a way as to “stretch” the application of the word because they see it as essentially rewriting the statute, which is beyond the scope of the Court. This argument was filed by the Department of Justice in an amicus curiae brief to the pending cases. However, this take rests on shaky foundations, because issues of sexual orientation and gender identity inherently deal with issues of sex, and how they challenge the traditional stereotypes of gender-conforming behavior. Beyond that, they must contend with years of precedent that say the opposite, with precedent being the predominant driving force in the majority of court rulings.

Ultimately, it is clear that something has to be done to protect the rights of the LGBTQ community. Currently there are no federal laws explicitly protecting the rights of members of the LGBTQ community in the workplace, and they are forced to turn to state laws for protection. As it stands, 27 states do not have laws stopping private companies from firing homosexual or transgender individuals, and only 20 states have full protection for LGBTQ individuals in the workplace, housing and public accomodations. The consequences are clear. Despite achieving nearly identical educational success with their non-LGBTQ peers, LGBTQ individuals suffer from almost double the unemployment rate at 9 percent, compared to their peers at 5 percent, and a Cornell University Study showed that only 11 out of 24 transgender job applicants recieved callbacks when competing with a non-transgender applicant. In addition, 25 percent of LGBTQ members are burdened with an income below $24,000 as opposed to 18 percent of their peers. The results are grim; nearly 27 percent of LGBTQ individuals face food insecurity, in stark comparison to only 15 percent of their fellow peers.

In 1973, homosexuality was still considered a mental disorder. America can be proud to say it has come a long way since then. Although there are still more battles to win in this campaign, the Supreme Court has a rare chance to secure a decisive victory. This community has forever struggled under the oppressive fist of an intolerant society, and this may be the single most decisive case in pursuit of equality under the law since Brown v. Board. The justices on the bench must remember Justice is blind, but America is watching.