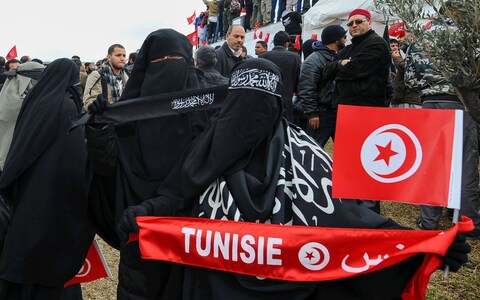 Tunisian ban on the niqab in public institutions: Attack on freedom of expression or necessary security measure?

On July 5, Tunisian Prime Minister Youssef Chaed declared an official ban on the use of the niqab in the country’s public institutions. The ban came about in the aftermath of a double suicide bombing in the capital, Tunis. One of the attacks, which took place on June 27, AlJazeera reported that a witness saw one of the bombers disguising themselves with a niqab.

While in the West, bans on face-covering veils are causing controversial discussions, in the case of Tunisia, this might be precisely what the country needs.

The Introduction Of the Ban

Even though the country’s religious demography consists of 98 percent Sunni Muslims, the country has long felt a growing divide between its secular and Islamist forces. The country is seen as progressive compared to other North African countries and has a complicated relationship with religious clothing. When Tunisia was a French colony, the Tunisian elites followed a nation of ‘colonial modernity’ and viewed the veil as backward and oppressive. This mindset of ‘unveiling to modernize’ is rooted in the Tunisian national identity, causing a cultural divide between the secular and the religious. The government banned the use of the hijab and niqab up until the Arab Spring under the rule of secular leader Zine El Abidine Ben Ali. After 2011, Tunisian women were allowed to wear religious clothing after decades of ban. However, due to the political instability that the Arab Spring catalyzed, the influence of Islamist terrorist groups grew substantially all over North Africa. Seeing the increasing potential threat, the Ministry of Interior of the newly elected secular government passed ‘controls’ on the niqab, fearing that terrorists could use it to cover weapons and bombs. Amid the growing secular-religious tensions in the country, the secular government won re-elections in 2016, and Youssef Chaed was named Prime Minister. In his primary address, Chaed told his people that they ‘must be prepared to make sacrifices’ and named his top priority to be the war on terrorism. Tunisia saw a string of terror incidents targeting both civilians and military forces in 2015 and 2016, which continued up to the 2019 twin suicide bombings on the capital. Thus, it does not come as a surprise that the Prime Minister felt a call to action. It is the string of terror attacks along with the use of face-covering veils as vehicles for terrorism that is causing the need for new legislation. While national security depends on restricting the use of face-covering veils, a ban will not come without its downsides.

The Question Regarding Freedom of Expression

When the first niqab controls came about in Tunisia in 2014, women expressed their dislike for such restrictions. Students such as Habiba, a 21-year-old university student, said to AlJazeera, “It is my face, and I am free to cover or uncover it.” The veil is supposed to serve as a sign of modesty, and in a secular society, it is not up to the state to tell the individual how they ought to practice their faith. However, the acceptance for religious clothing sharply declines when referring to burqas and niqab as a form of expressing religious identity. There are significant distinctions to be made between different veils. The hijab is a scarf that covers the hair but leaves the face of the beholder fully visible. The niqab covers the hair and most of the face, leaving only the eyes visible. A Burqa fully covers the body and the face, including the eyes. Saloua Kennou, the president of the Association of Tunisian Women for Research and Development (AFTURD), told Morocco World News she hopes that the ban will be definitive. In the West, we often argue that women should be “free” to wear what they want. Thus, denying anyone their right to cover their face is seen as a human rights violation. However, some, like Saloua, argue that, “The niqab hides women, makes them silhouettes, objects that need to be hidden.” In this context, Tunisian women rejecting the niqab might be construed as an act of feminism and one can effectively diffuse the argument that face-covering veils are a human rights issue. However, human rights groups are warning against legally restricting its use. Amnesty International warns of the stigmatizing effects nationwide bans will have on veil users and that the bans may cause religious violence and hate crimes. It may also have unforeseen consequences on the women who use face-covering veils. Agnes de Feo, a French sociologist, studies the use of veils in France and other places. After France banned the use of the niqab and burqa in 2010, she started documenting the effects the ban had on users. She found that women using niqabs and burqas felt a loss in their autonomy to express their religious identity and viewed the ban as French institutional discrimination against Muslim women. They stopped going outside and chose to stay at home. The effect of a ban might be counterproductive as the isolation of a minority will leave them more vulnerable to extremism and radicalization.

The Legitimacy of the Niqab Ban

Even though most instances of terrorism do not include the use of a niqab or a burqa, limiting potential vehicles for terror can help maintain collective security. While legislation related to the veil varies significantly in the Muslim-world, it is not unheard of for a Muslim-majority nation to place restrictions on the use of face-covering veils. In 2017 The Telegraph compiled a report on all Muslim countries that have introduced burqa bans. In June 2015, Boko Haram executed an attack on N’Djamena, similar to the one seen this summer in Tunis. The perpetrators were women wearing burqas, and shortly after, President Kalzeube Pahimi Deubet banned its usage and had all burqas on sale burned. The fear was that they once again could be used as camouflage to execute similar attacks. Shortly after N’Djamena, the government in Niger declared a regional burqa-ban in Diffa, a region deeply affected by Boko Haram, to prevent future suicide attacks. Even non-muslim African countries have introduced burqa bans as a preventative measure against terrorism;both  Cameroon and Congo-Brazzaville have adopted similar legislation. The success of these restrictions is varied, but areas highly prone to terrorism, such as Diffa, have seen a decline in executed terrorist incidents. A series of both Western and non-Western nations have banned or limited the use of face-covering veils. Seeing that burqa bans in non-Western states is not something new raises the question: how the case of Tunisia is different? The answer is its geopolitical position. Tunisia is an Arab country and a member of the Arab League. It is the only Arab country restricting the use of face-covering veils after Morocco, who banned the sale in 2017. Being in a regional organization where attitudes towards the burqa and niqab range from obligatory to outlawed puts Tunisia in a peculiar situation with the more conservative members. The country has to find a balance between not only its internal secular and religious divisions, but also with its fellow Muslim and Arab political blocs. Keeping in mind the potential risk with a national ban, Tunisia might have found a balance between religious freedoms and national security by limiting its restrictions to just public institutions. Face-covering veils is a legitimate security threat for the Tunisian state, hence, banning their use in public institutions is a model that creates a compromise between the secular and religious in the country.

What does the future hold?

Despite the backlash from human rights activist groups, in some instances, limited bans can be the right thing to do. Areas where terrorism is a potential and significant threat can benefit from applying a targeted ‘Tunisian-style’ ban. Facial recognition is an essential tool in capturing perpetrators, and the niqab and burqa give terror groups a way to hide their identities as they conduct their attacks. The effect will be the stigmatization of innocent women who use face-covering veils. However, considering the modern-day nature of the niqab and burqa and its use in terrorist activities, this sign of modesty is becoming a severe threat. With the increasing need for collective security, legislators have to take action. Still, they have to be careful not to isolate groups as it may lead to more severe, unintended consequences.