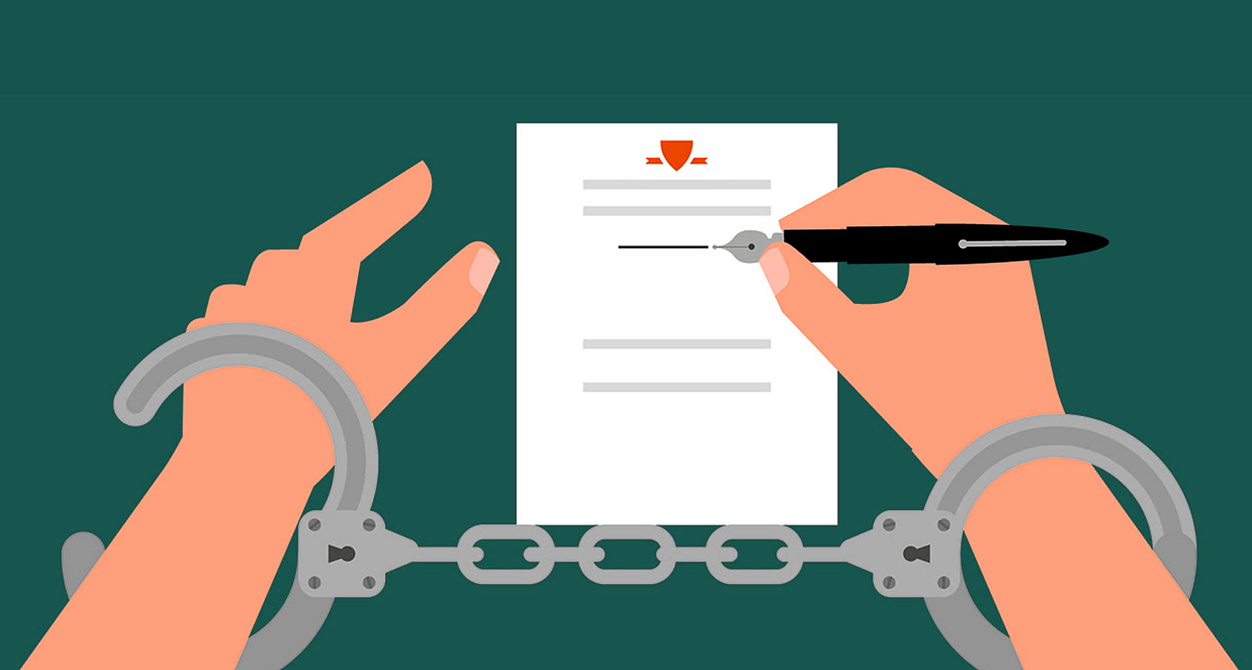 In the American criminal justice system, more than 90 percent of all criminal charges are resolved through plea bargains. A plea bargain is an agreement wherein the defendant pleads guilty to a crime, usually a lesser crime than the original charge, and as a result, waives his or her right to a jury trial. What is typically understood as a strategic opportunity to avoid longer sentencing is, in actuality, a tool used to sustain mass incarceration through a prioritization of efficiency that strips defendants of legal protection. Plea deals, often taking the form of minute-long exchanges in courthouse hallways, are laden with power asymmetries. Prosecutors — rewarded for the number of convictions they accrue — are incentivized to engage in strategic charge-stacking, conceal information regarding the likelihood of jury conviction  and blatantly coerce defendants to plead guilty. Because plea bargains are far less time-consuming than a protracted trial process, they keep the system moving at a rapid pace and play an essential role in nurturing the United States’ unparalleled prison growth.

In response, prominent legal scholars such as Michelle Alexander and Brady Heiner have advocated for mass plea refusal, where public defenders reject plea deals and push their cases to court. This proposed solution rests upon the assumption that if every case was taken to trial, the criminal justice system would be forced to bear the real cost of over policing, charge-stacking and mass misdemeanor processing. Simply put: the system would grind to a halt under its own weight. The purported result? Broad criminal justice reform targeting the sources of mass incarceration.

Though seemingly outlandish, there is a strong evidentiary consensus that a mass plea refusal would successfully overwhelm the system. Because over 90 percent of cases are resolved through plea bargains, there simply does not exist the requisite number of public defenders, courts or police departments to try every case that it charged. The question then is not: is a crash of the system possible? Rather, what is the most likely outcome of the crash?

It’s unclear why the same decision-making bodies responsible for mass incarceration would respond to increased judicial backlog with drug legalization and decarceration instead of a proportionate expansion in prison and court facilities. Heiner attempts to answer this objection in his essay: “The procedural entrapment of mass incarceration: prosecution, race and the unfinished project of American abolition.” He argues that public reinvestment in mass incarceration is ‘politically unlikely.’ He claims that because state and municipalities already apportion substantial funds to corrections and law enforcement in order to address overcrowding in state prisons, the electorate is likely to reject any further bankrolling of the prison industrial complex.

However, Heiner seems to neglect the possibility that private prisons, unconstrained by state budgets and public resistance, capitalize on the surge of defendants in need of prison cells. Although private prisons account for a small overall percentage of the country’s prison population, they have grown at a disproportionate rate in the past few decades, with an astounding 1600 percent increase in their populations from 1990 to 2005. The shift to private prisons would not only circumvent the need for progressive criminal justice reform, it would also result in worse prison conditions for inmates. In order to lower operating costs, private prison corporations tend to cut corners by hiring fewer employees and providing fewer baseline resources to inmates. Furthermore, because prison corporations stand to make profit when more people are sentenced to prison, they use lobbyists and campaign contributions to support for policies that call for harsher sentencing laws. For example, the Corrections Corporation of America, the largest private prison company in America, has dedicated $17.4 million to lobbying expenditures in the past decade and $1.9 million on political contributions between 2003 and 2012. The political influence held by private prison corporations casts heavy doubt on Heiner’s faith in altruistic federal reform.

Even assuming that judicial crash is capable of jumpstarting progressive criminal justice reform, the intermittent court clog would be detrimental to those most at risk of prosecutorial predation. Already, those who await trial spend years in pretrial detention simply because they cannot afford bail. Studies indicate a strong correlation between race and the likelihood of flight risk designation. Thus, those disproportionately harmed by bail decisions tend to be people of color and the poor. Pretrial detention results in the same harms as incarceration — family separation, job loss, drug addiction and recidivism. Additionally, lengthy pretrial detention can impair the preparation of effective defense because witnesses may forget information critical to securing a non-guilty verdict and face greater difficulty consulting legal counsel.

Although American jurisprudence ostensibly rests on the presumption of innocence, the criminal justice system’s structural dependence on plea bargaining is strong proof of the contrary. Though the solution proposed by Alexander and Heiner is prohibitively utopian, they are correct that reform of some kind is needed to sever the plea to prison pipeline.

Danielle Dosch
More from The ReviewMore posts in The Review »