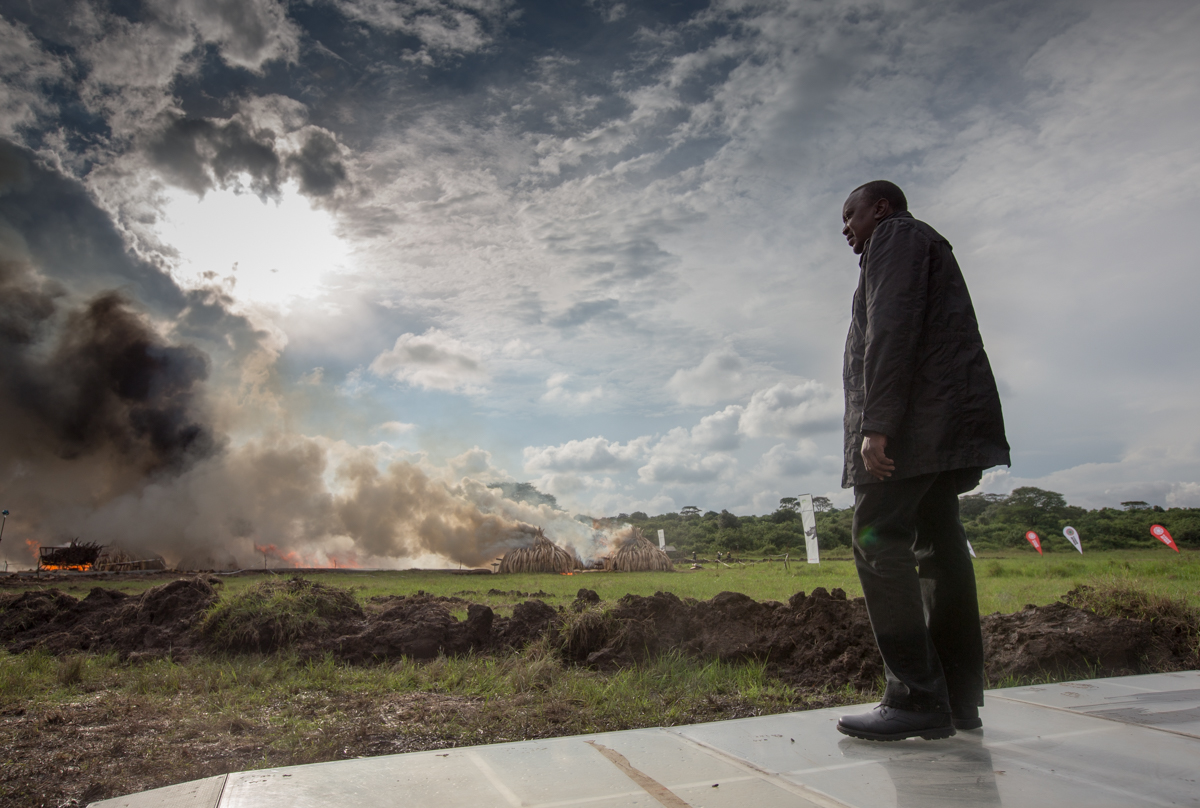 In Kenya, two men born farmers were both educated at mission schools. One went abroad, one stayed home. One fought their oppressor, one aided his people. One sought the West, one looked East. Both died leaders, both left sons.

These are the parallel stories of two of Kenya’s founding fathers: Jomo Kenyatta and Oginga Odinga. Kenyatta was born into the Kikuyu tribe near what is now the capital, Nairobi. Educated in London and Moscow, Kenyatta would return to his homeland to agitate for independence from the British Empire. Odinga, born into the Luo tribe along the country’s southern border, took the opposite path, staying and attending school in Kenya. He would go on to organize Luo people across East Africa, eventually being crowned Ker, the title of a legendary Luo king. He would later join Kenyatta and others in the Kenya Africa National Union. When Kenya finally gained its independence in 1964, the two would rise to Kenya’s highest offices: Kenyatta as President, Odinga as Vice-President.

At that point, any friendship between the two men died. As two of the country’s most powerful leaders, Kenyatta and Odinga were tasked with the monumental challenge of building an entire country from the group up, yet they each had different ways of going about it. On the political right, Kenyatta desired closer ties with the American-led West  with its capitalism and existing economic connections to the country. On the left, Odinga wanted to move towards the Soviet-led East, whose socialism and espoused anti-imperialism aligned with Kenya’s recent tribulations. This disagreement on the future of the country spoiled their friendship and sparked a feud between their families and tribes.

After this falling out, Kenyatta’s government would arrest Odinga. By the time of Kenyatta’s death and Odinga’s release in 1978, Kenya was solidly authoritarian. After only half a decade of freedom, Odinga would once again be arrested in 1982, this time by Kenyatta’s dictatorial successor Daniel arap Moi. After his release, he would be arrested once more in 1991, before the elections of 1992, where he would win a seat in in the Kenyan parliament. Odinga would die in this post in 1994, never returning to power in Kenya, never seeing Kenya return to the democracy he once knew it as. In their wake, Kenyatta and Odinga’s feud left behind lasting animosity between the Kikuyu and Luo, animosity which has only become more entrenched with repeated conflict.

In August 2017, Kenya held its national elections between incumbent President Uhuru Kenyatta and challenger Raila Odinga, the sons of Jomo and Oginga. Just as their fathers before them, the sons espoused competing visions for the future of Kenya, and even more so like their fathers, their dispute once again fell divided upon ethnic lines. The official results in August gave the victory to Kenyatta by a ten-point margin. Despite affirmations of the result by international observers, Odinga claimed the election to be rigged. The Kenyan Supreme Court nullified Kenyatta’s victory and ordered a new election, but Odinga refused to stand for the October election, citing the same concerns as before.

During these election periods, at least 37 people were killed by the police and armed gangs, who often tested victim’s knowledge of the Kikuyu language. Kenyatta has retained his position as president, even as Odinga has asserted his claim, going so far as to inaugurate himself as the “people’s president.” In response, Kenyatta has cracked down on Odinga’s political allies and has maintained control of radio and TV stations. Though violence has largely died down in recent months, it is obvious to any observer that this was another example of the Kikuyu-Luo, Kenyatta-Odinga violence that originally paralyzed the country in the 1970s and more recently in 2007.

To understand why Kenya is so consumed by a familial and ethnic conflict, one must look into Kenya’s past. Although Kenya threw off the shackles of imperialism in 1964, the only real change was the skin color of the men in charge. The fundamental structure of the government remained strong. Identity remained divided. Politics remained corrupt. Unlike Kenya’s neighbor to the south, Tanzania, the country never attempted to build a single Kenyan ethnicity through education and integration, leaving Kenya’s many tribes and ethnicities the strongest identities in a country of nearly fifty million. In only two instances did Kenya see an opportunity to create lasting harmony: in 1964, at its freedom from the British; and in 2002, at its freedom from the Moi regime. After each, however, Kenya failed to reconcile its inner divisions, leaving any prosperity to fail as soon as ethnic conflict reared its ugly head. Despite the progress Kenya has achieved in other areas over the last 50 years, the traditional ethnic lines have never been erased. They may fade at times, as they did in 1964 and 2002, only to reemerge as soon as Kenya’s progress slows. These lines are then used as justifications and tools for violence, either to achieve power or to retain it. The result is Kenya has nearly always existed in a vicious cycle under either conflict or oppression.

How to break this cycle is the million-dollar question, and its answer is important not just for Kenya but for the rest of Africa as well. In Kenya’s own backyard, a new country, South Sudan, is currently embroiled in an ethnically-divided civil war. In Central Africa, conflicts in the Central Africa Republic and the Democratic Republic of the Congo have often started or ended with ethnic cleansings. Even in Africa’s biggest and fastest growing economy, Nigeria, ethnoreligious differences have fueled near-constant farmer-herder violence, with thousands dying over the last two decades. Ethnic violence is a problem for the African continent, and ultimately, it is a problem of African development. Continuous conflict scares off investment, rolls back progress and prevents many countries from moving forward. In places like Kenya, the recent economic growth has occurred in spite of conflict, but most of Africa cannot say the same, and it is uncertain whether such growth is even stable because of this violence. Solving ethnic violence in Kenya, and Africa in general, is thus a key part of any long-term plan of development.

One common solution is consociationalism, which was attempted in Kenya after the 2007 electoral violence. In consociationalism, political power is divided between ethnic groups through the assignment of political offices, the allocation of seats in the legislature and the formation of compulsory coalition governments. This strategy has been used to great success in Europe and is in use today in Northern Ireland and Bosnia. Consociationalism, however, is but a short-term solution to long-term problems. The 2008 agreement lasted for two years until the ratification of a new constitution intended to prevent a repeat of violence. As is self-evident, this power-sharing and even this constitution have largely failed. A conflict predicated upon people deriving political allegiance from their ethnicity will ultimately never be solved by an agreement that enshrines such allegiance, and true democracy will never develop.

The solution to Kenya’s problem of ethnic violence will never be as simple as an agreement to not fight or a constitution to ensure equality. Any solution to such violence will require wholly new political frameworks and constant vigilance on the part of actors and observers alike to protect such frameworks. Such a solution will require three components: openness, integration and enforcement.

Enforcement is the easy part. Any peace requires either ever-willing participants or a dominating authority. In Kenya’s case (as well as in Africa as a whole), having willing participants is, empirically, not a condition that can be expected. The alternative is then a dominating authority, and for this, we need not look farther than the other side of Africa for an example. The Economic Community of West Africa States (ECOWAS) has, over the last two decades, demonstrated an increasing willingness and ability to intervene in domestic conflicts. Most recently, the organization deployed nearly ten thousand soldiers to The Gambia, where it successfully enforced the result’s of the country’s first democratic election since 1994. This enforcement of democratic norms by ECOWAS sets a standard for other supranational organizations in Africa. Support for and invitations of such intervention should form a key pillar of an end to the ethnic strife in Kenya.

Change, however, cannot come from without; it must come from within, and this is where integration and openness become key. Kenyan leaders need to be proactive in remedying the long-range causes of conflict and not just the conflicts themselves. For openness, we can look to the research of Professor Leonardo Arriola of U.C. Berkeley in his book Multi-Ethnic Coalitions in Africa. Presently, ethnic groups tend to be divided politically because of constraints on their activity. Businessmen and politicians alike do not have strong, multiethnic avenues for funding, so they are forced to look for it within their own tribal communities. By liberalizing financial markets and opening up campaign finance laws, Kenyans would be incentivized to bridge ethnic divides of support, financially and politically. This would help forge new ties not just between Kikuyu and Kikuyu or Luo and Luo, but between Kenyans and Kenyans.

Finally, with regard to integration, the Kenyan government needs to follow in the footsteps of Tanzania in educating the people, as well as their children, on the benefits of unity and the importance of their shared Kenyan identity. After their near-simultaneous formation in 1964, the two countries saw a great divergence in their treatment of identity, according to Berkeley Professor Edward Miguel. In post-colonial Tanzania, the government promoted Swahili as the national language, employed a school curriculum emphasizing a national and African identity, overhauled the tribal-based local governments left from colonization and enforced a more equitable distribution of public services among the regions. By contrast, in Kenya, Swahili competes with various tribal languages at every turn, school curriculums emphasize provincial identities, tribal chiefs remain the principal local authorities and governments are defined by tribal favoritism. The result is Tanzania has a widespread national identity and Kenya does not whereas Kenya has widespread ethnic division and Tanzania does not. By promoting cross-ethnic integration on a societal level, Kenya can start to eliminate the problems and inequalities that so fuel conflict in the country.

Most important to all of these solutions is that they happen concurrently and constantly. Tribalism is an entrenched characteristic of Kenyan politics, and it will not be solved by singular and piecemeal reforms. Kenya needs to be rebuilt, and each of these reforms addresses one part of this rebuilding. By developing all of these policies, a Kenyan government would be addressing the diplomatic, economic and cultural issues that cause violence. After the first election last year, Kenyatta said, “As with any competition, there shall always be winners and there shall be losers, but we all belong to one great nation called Kenya.” But words are cheap. It’s time for a change.